He’s wrestled Tom Cruise, played (and beaten) a man in ping-pong for a date with his daughter and owned 21 sportscars. No, this is not a Dos Equis commercial pitch. Rather, this is the story of the top spokesperson/salesman in Chevrolet’s campaign against the likes of Ferrari, Porsche, Lamborghini. He is Mike Furman, aka Mr. Corvette.

Today, he has sold over 4,500 of the cars in his career and, in 2001 became the No. 1 Corvette salesman in the world. But his story starts in New Jersey, when, as an accomplished competitive wrestler (how he happened to dislocate Cruise’s shoulder) he found an even greater passion. “The first moment I knew I was a Corvette fan was spring of 1978 when all the car magazines did articles on the 1978 Corvette, which was the Indy 500 Pace Car for that year's race," says Furman. “I thought it was cooler than the other side of the pillow.” 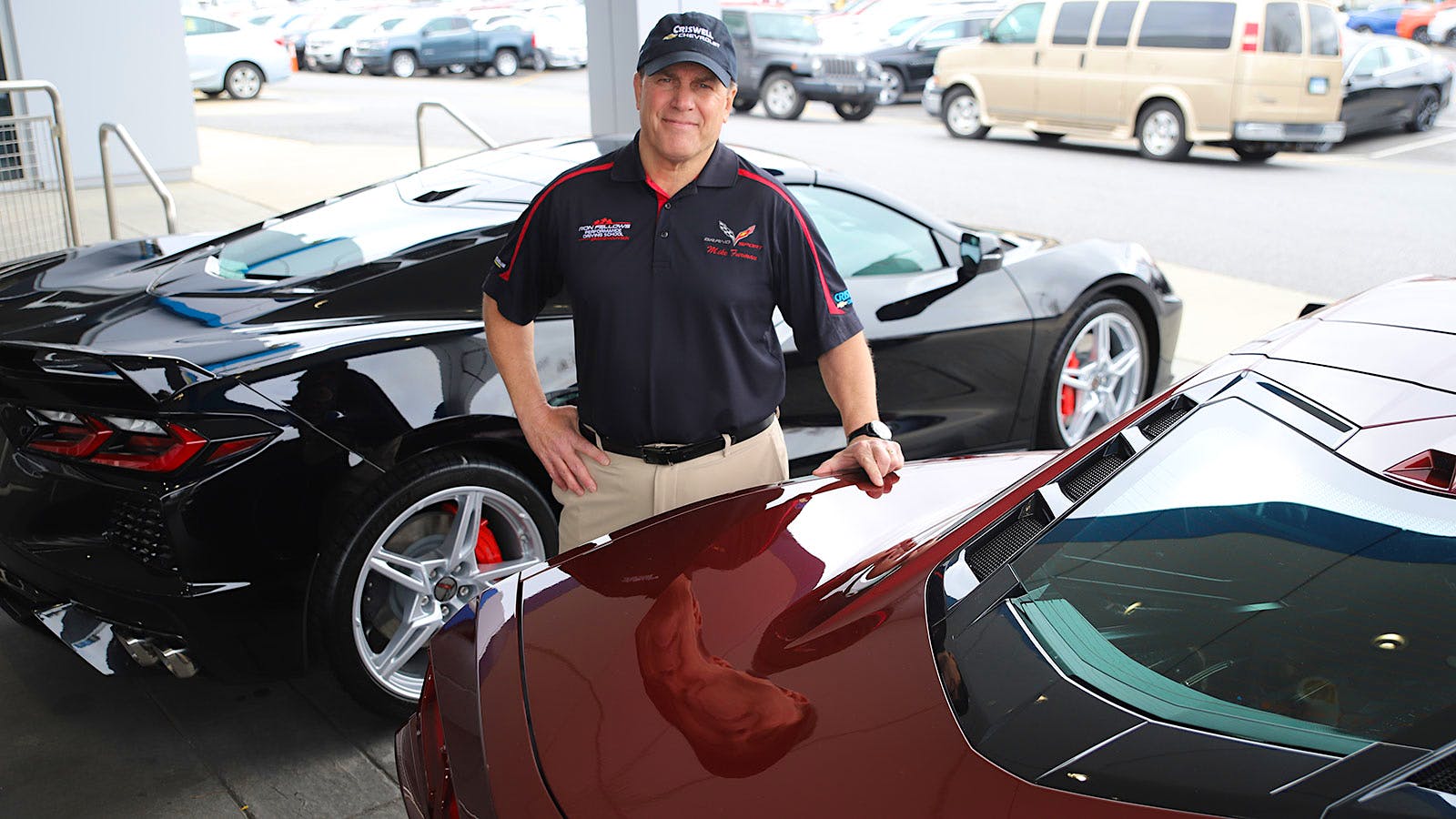 The young man soon found himself with a chance to sell cars at a Paramus, N.J. car dealership called Malcolm Konner Auto Group, and his dedication transformed into a lifelong love letter to the Chevrolet Corvette and those who embrace it. That’s why Mike teaches an ownership class at Spring Mountain Motor Resort in Nevada, a country club for sportscar drivers with pools, shooting ranges, villas and, instead of a golf course a racetrack. And to keep his friends and fans up to speed, Mike maintains a blog that gets anywhere from 35,000 to 75,000 hits per week. One of his Facebook posts—a photo of a custom pink Corvette—surpassed 74 million views.

That kind of intimacy with his customers and Corvette enthusiasts is what has led to follow-ups and celebrity sales throughout the decades. He’s sold ‘Vettes to the likes of Cy Young Award winner Justin Verlander and son of the famed Supreme Court justice, Thurgood Marshall Jr. (TJ to Furman). The latter showed up wearing a suit in the 100-degree heat.

His next goal is his 5,000th sale, a milestone that seems to be clinched in that he has deposits for some 1,200 cars. Along the way he’s helped his cause by parking a succession of his own Corvettes in his garage. The first was a 1959 model. The most recent is a custom-made blade-silver 2020 Corvette Z51 Coupe with a two-tone blue interior.

When it comes to selling cars, Furman says that most salesmen put in the work for the day so they can eat at night. Always one step ahead, Mike’s motto is, “Gotta eat today, but you gotta eat tomorrow too,” a mentality evident in his approach. For example, Furman started collecting deposits for the new 2020 C8 in March 2014. By press time he had sold 447 C8s—when the car had only recently gone into production. Even today, Furman has started accepting deposits for the 70th Anniversary 2023 Chevy Corvette. 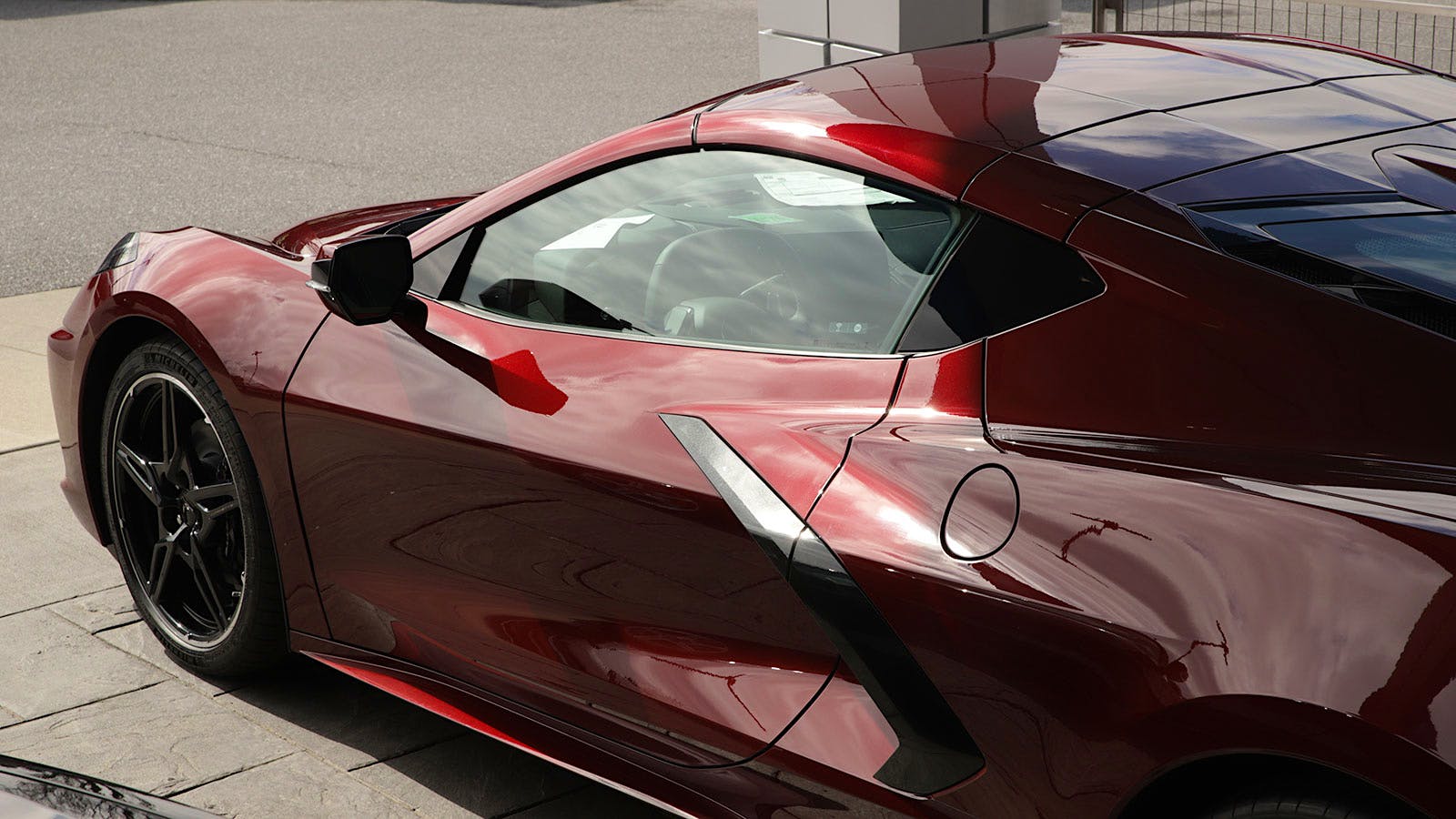 Sometimes his persistence and connections take years to pay off. In 1992, an acquaintance left Furman with the vehicle identification number to a 1967 he had once owned. Thirteen years later, another man reached out to Mike about the paperwork. He was selling the car and having the original documentation would increase its value. Furman hooked them up—the VIN-holder and car owner benefitting from a sizeable increase in value.

“At the end of the day, I’m just a Corvette salesperson,” says Furman. That is, a Corvette salesman who often gets asked for his autograph. At the suggestion of General Motors the producers of the Bravo reality show “Newlyweds: First Year” shot an episode at his dealership, Criswell Chevrolet, in Gaithersburg, Maryland. He managed to put the newlyweds in a new Corvette, even though the wife was pregnant. There’s a full-cycle irony to that. Furman’s own wife came home from the maternity ward as a newborn in her father’s 1957 Corvette.

To Furman, the new mid-engine 2020 Chevrolet C8 is the future of the brand, an ode to Zora Arkus-Duntov, the Corvette innovator who for decades had dreamt of the car going from rear to mid-engine. In fact, Furman boasts of getting requests from people in Ferrari forums and customers in Europe and across the globe. He claims that the model can compete with, and even surpass, the best of the best in its class.

One thing is certain: Mr. Corvette will keep handing over the keys to satisfied customers.

To read about the new, mid-engine models of America’s favorite sports car, see “Corvette, The Next Generation,” in the June issue of Cigar Aficionado, on newsstands now.