Share
When Paul Huston’s local cigar bar closed, he took matters into his own hands, creating a cigar lounge next to his home.

The distressing news came to Paul Huston from the Davidoff Cigar Lounge of Greenwich (Connecticut) in an e-mail: “Unfortunately, the lounge is closing at the end of the month.” That same night, half the membership had gathered at the club to commiserate. “Everyone was saying, ‘How did this happen? We should have figured out a way,’ ” recalls Huston. “It was like an Irish wake.”

Relating his seemingly tragic story almost two years later, the chairman of a private equity firm, with his boyish platinum hair, angular face and dignified, patrician demeanor, is curiously upbeat. Maybe because of the plot twist that turned the tale around.

As Huston sat among the mourners in the ill-fated club, an idea flamed. Adjacent to his home on his three-acre property in the toney suburb of New York City was a carriage house, though it sheltered no horses. It had sat empty for two years. “I’m there smoking a cigar, drinking my Scotch,” he says. “I texted my wife, Linda: ‘I think I know what I want for our anniversary. We should build the cigar lounge over the garage in the carriage house.’ It didn’t take her 20 seconds to text back to me. ‘I love that idea—let’s do it.’ ” 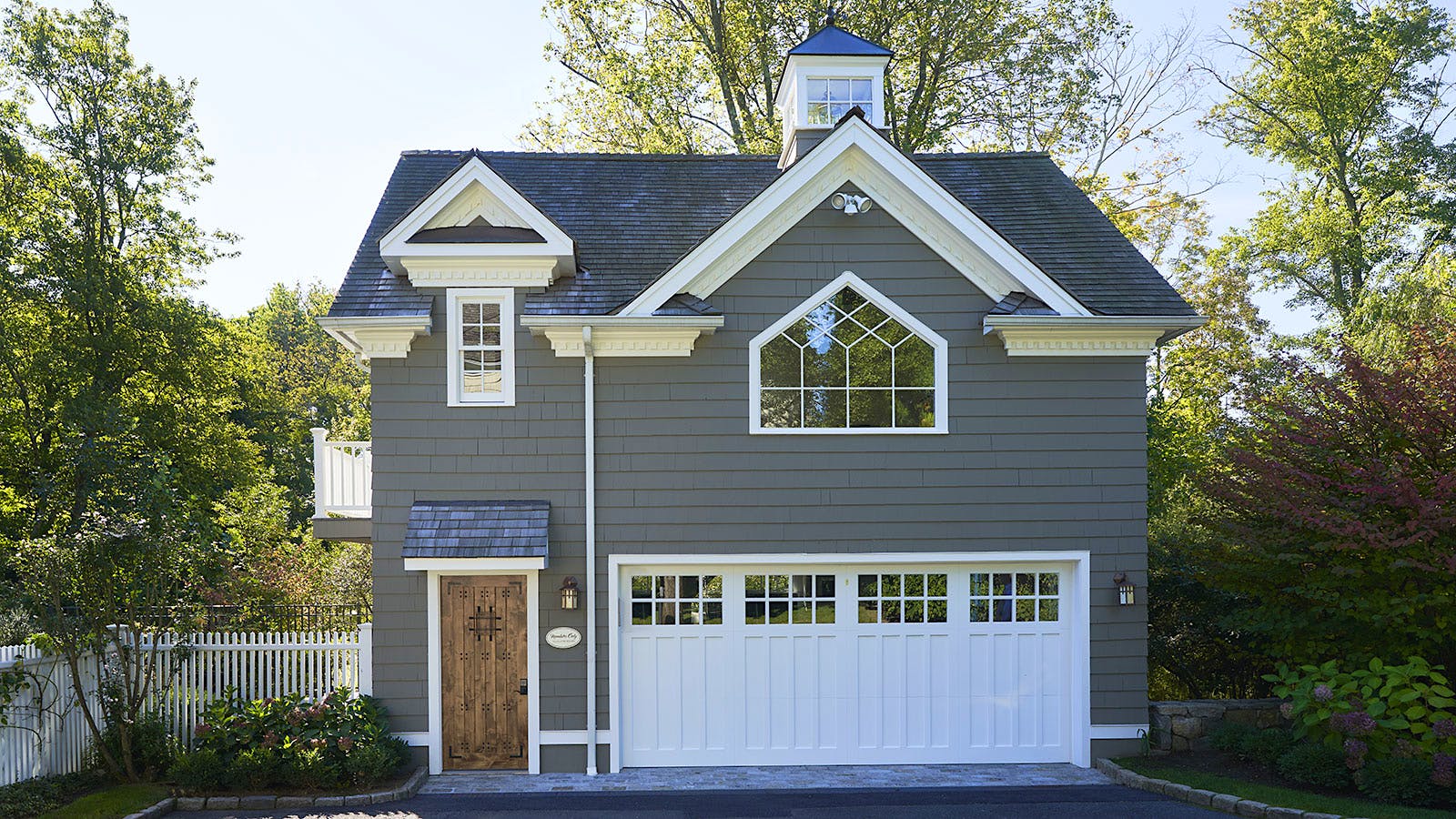 Today, through the support of his wife, a self-described female with testosterone, and the designs of Vincent Sciarretta, a local builder of mansions, Huston is now ensconced in the man cave of his dreams. Where once there was a mouse-infested storage room for patio furniture and Christmas decorations, a combination cigar parlor and theater for sporting events stands.

Huston, who envisioned a lounge that mimicked the sophisticated look of his former club, is pointing out the details of the realization of his plan. The porcelain floor appears like beach wood. The grayish barn-wood walls climb high to a cathedral ceiling. “Just because you are smoking cigars, you don’t want it to look like a dungeon,” he says. Dimmable, low-voltage puck lighting brightens his lounge just enough. An $8,000 Rabbit Air purifier stops any smoke clouds from hanging.

“It’s got to be cool, airy and bright,” says Sciarretta, owner of VAS construction in nearby Darien. “You want to be in a happy spot.

That happy spot is now popularly called a man cave, a part of the vernacular that casts a wide net. It evokes many images from a room with a card table, shadowy and barely visible through a haze of smoke, up through dens with pool tables or pinball machines, all the way to a professionally designed retreat. 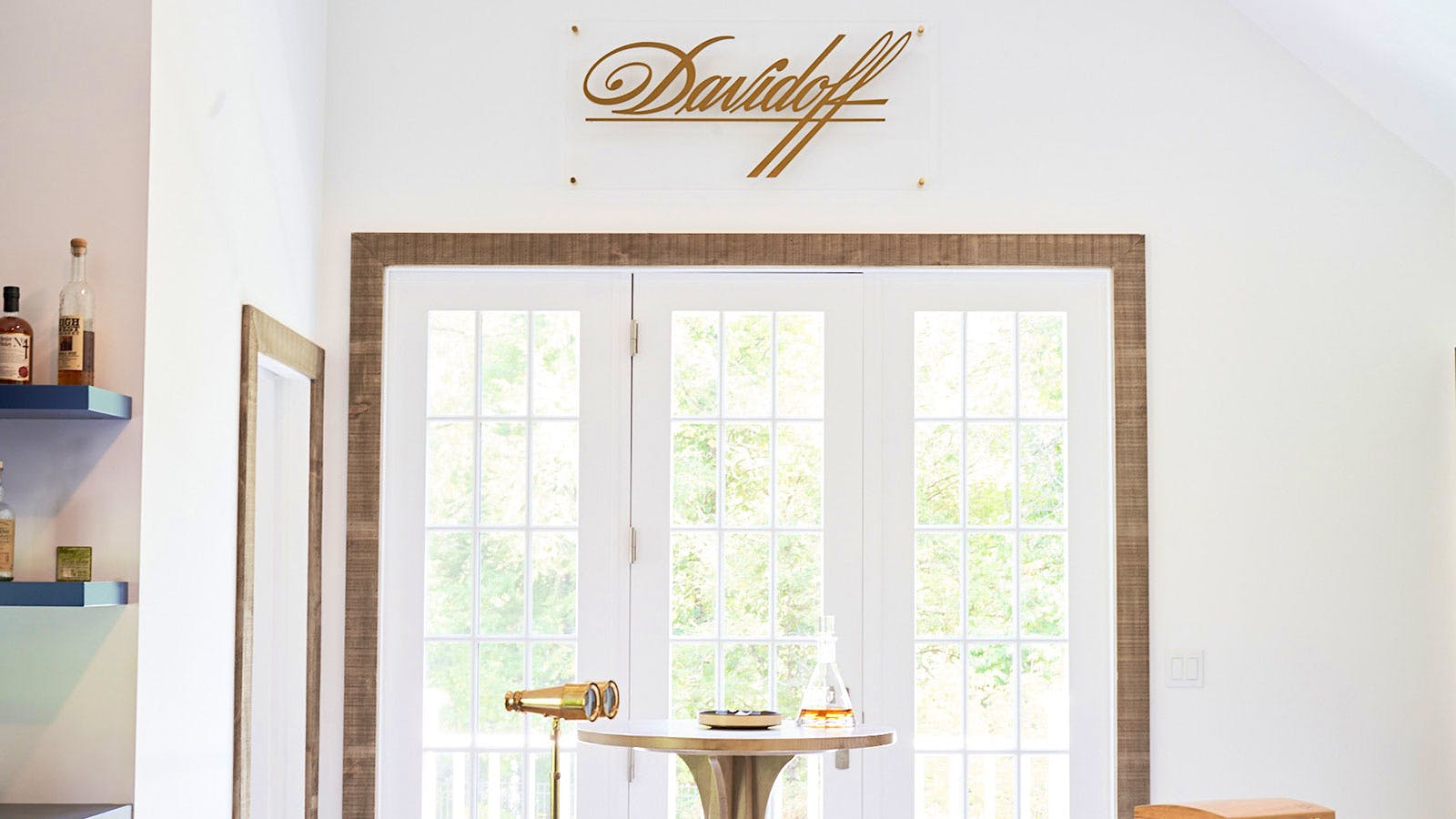 But the term also conveys a revolt against feminization, a last bastion of masculinity. The designer of his own male quarters is saying in essence, ‘My authority has been usurped by my wife and kids in the rest of the house, so I am taking back some real estate.’ Hence man caves lack any fuchsia shades, throw pillows, lacy curtains or doilies beneath porcelain bowls. All are unwelcome in cave land, lest it be confused with a she-shed.

Any auxiliary use of the space must also be male friendly.

Paul gestures to the television on the wall, which delivers football to the sanctum. Its 75-inch monitor stretches out as long as a billiard table, with surround-sound audio reverberating off the walls. “No one ever complains that the television is too big,” Linda laughs. The esthetics are impeccable: the black hue of the fireplace mirrors that of the television. The sound system is first rate. A combination of a couch and club chairs create the effect of stadium seating for 12.

While few have the real estate—or means—to match Huston, it’s not the size that counts. Be it one room—a remodeled den or garage, guest room or basement—any space can constitute a man cave. What’s essential is that the man molds it to his will and his tastes. There are man caves with putting greens, bars, kegerators, vending machines, boxing rings. One guy even turned his room into a Mets clubhouse. Another went for a medieval castle look. 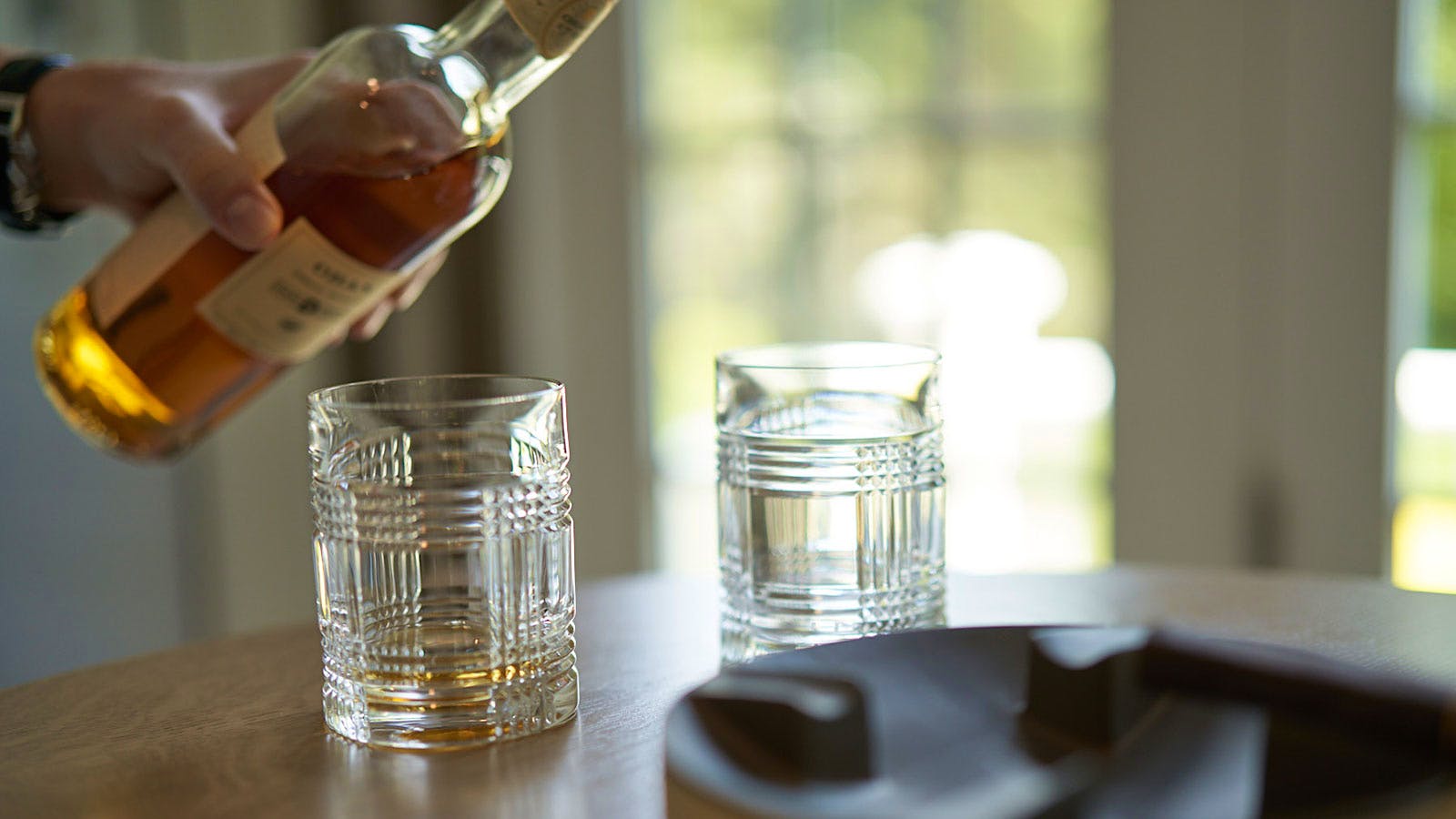 Perhaps nothing has demonstrated—or for that matter jump started—the man cave movement so much as the television show “Man Caves.” Produced from 2007 to 2016 by the DIY Network, it featured Tony Siragusa and Jason Cameron. The reality show provided masculine makeovers for properties in need, many of them belonging to celebrities. Cameron brought the building talent, while Siragusa, a 350-pound defensive lineman from the NFL champion Baltimore Ravens, brought star power. He would make suggestions (read: break balls), while chatting up the likes of Charlie Sheen and Snoop Dog, but Siragusa rarely held a hammer.

Sheen was likely the most famous recipient of a man cave, courtesy of the show. His Beverly Hills mansion had an octagonal room with a forlorn bar where no one ever gathered for cocktails. Time to upgrade. Sheen was into it. “If you’re a real man, it’s a spot you’ve got to have to be away from all things unmanly,” he told them.

Grand entrance doors were required. “If it doesn’t weigh 1,000 pounds and it’s not two inches thick, we don’t use it,” Cameron explained, describing the massive castle doors. A secret door behind a wall opened to a walk-in humidor with “Sheen’s Cigars” emblazoned on the glass. In time, the crew constructed a custom cabinet for 600 bottles of wine. Alongside sat two plug-in humidors. When the makeover was revealed at the episode’s conclusion, an overwhelmed Sheen hugged Siragusa and sank into his leather chair. “Who’s got it better than me?” 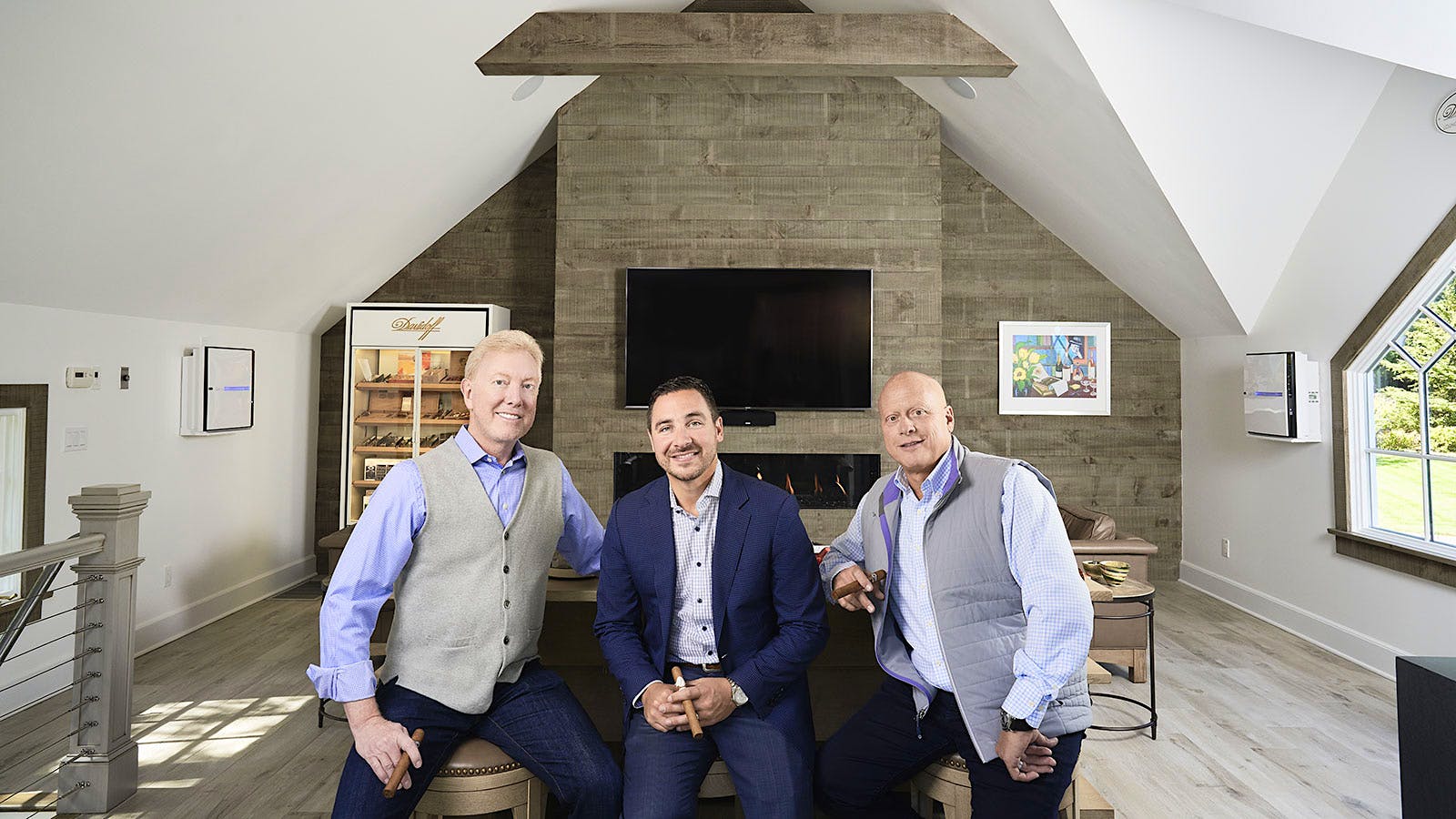 Much of the show’s drama came from the wives’ efforts to impose their own visions on the final product. “It’s not supposed to be what the woman wants,” Siragusa said at the time. “Sometimes the woman will come by as we’re finishing up and say, ‘Oh, we’re going to change this.’ ”

No such problem beset Paul Huston’s makeover. “As long as I’m in my space, if my wife wants to come in, that’s fine. The nature of the place is that we smoke and watch sporting events,” he says. “We don’t have that many women who smoke, but they don’t mind smelling the aroma. At the Super Bowl, three women watched the game, sitting in the back over there.”

Paul also wanted the new space to recall the lost cigar club. “We tried to get as close as we could to the color of the [brown] chairs,” Paul says, “I love the fact that the arms are flat, so you can put your drinks on them.” A sign outside warns “Members Only.” In fact, Paul invited some former members and offered them “membership” at his place. “We now have 10 members,” he says, showing off the velvety, maroon smoking jackets worn by members. The room was finished just before New England’s win over Los Angeles in the Super Bowl in February. “You should have seen the Super Bowl with people wearing those jackets.” 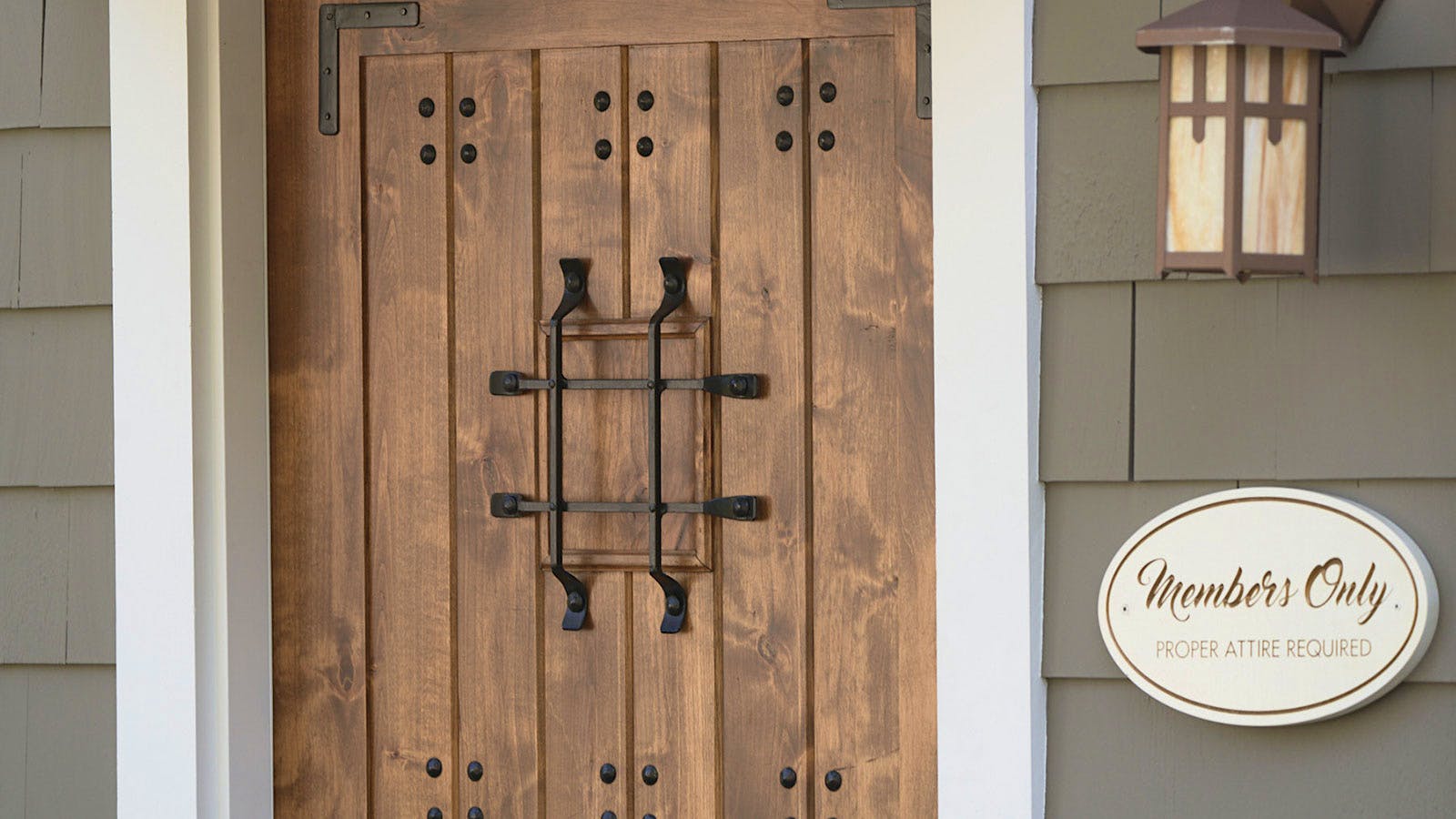 To enter, you use a code on a keypad. Even then, a peephole latch on an old speakeasy-style door awaits you. “The membership is predominantly football fans, mostly Giants fans, and my friend’s son-in-law is a Patriots fan,” Paul adds. “But the four-digit code that everyone has to memorize is a very memorable Giants football game.” Savage.

Inside are two sprawling murals, cityscapes that once hung in the old lounge. Paul says that members are also expected to bring a gift, and gestures to a portrait as an example.

If the popular term “man cave” seems ominous or unbefitting some of the luxurious examples of the genre, consider what John Cena insists on calling his retreat: Gentleman’s Room. In a series of videos called “Our Home: John & Nikki,” the rapper/wrestler/actor/pitchman and champion of the Make-A-Wish Foundation welcomed viewers into the Land O’ Lakes, Florida, mansion he shared with his then girlfriend, Nikki Bella, also a professional wrestler.

As well as providing for an opulent pool, a master bedroom with mirrored ceilings, a massive dressing room and a music area, they dedicated a “leftover unused room” to cigar smoking. It’s a stately array of dark leather chairs, two televisions and several chess sets, suitable for watching sports and for spirited conversation. Just below the coiffured ceilings, a shelf encircles the room, holding the colorful helmets of the defunct XFL football teams. There are two humidors and a ventilation system that keeps the smoke from going to the rest of the house.

Whatever the room, having cigars on hand is key. Back in Huston’s clubroom in Greenwich, there’s no shortage of smokes. A glass humidor that would make a refrigerator look small is stocked with Montecristos, Partagas, Avos, Padróns, Davidoff Limited Editions and more. Paul and Vincent fire up Padrón 1964 Anniversary Series smokes. “When I was just getting into cigars, I went to a cigar store in New York and he recommended the ’64 Anniversary Series,” Paul says. Later, he moved to other choices, but he tends to go mild as the hour grows late. “A strong one makes it tough to sleep at night.” 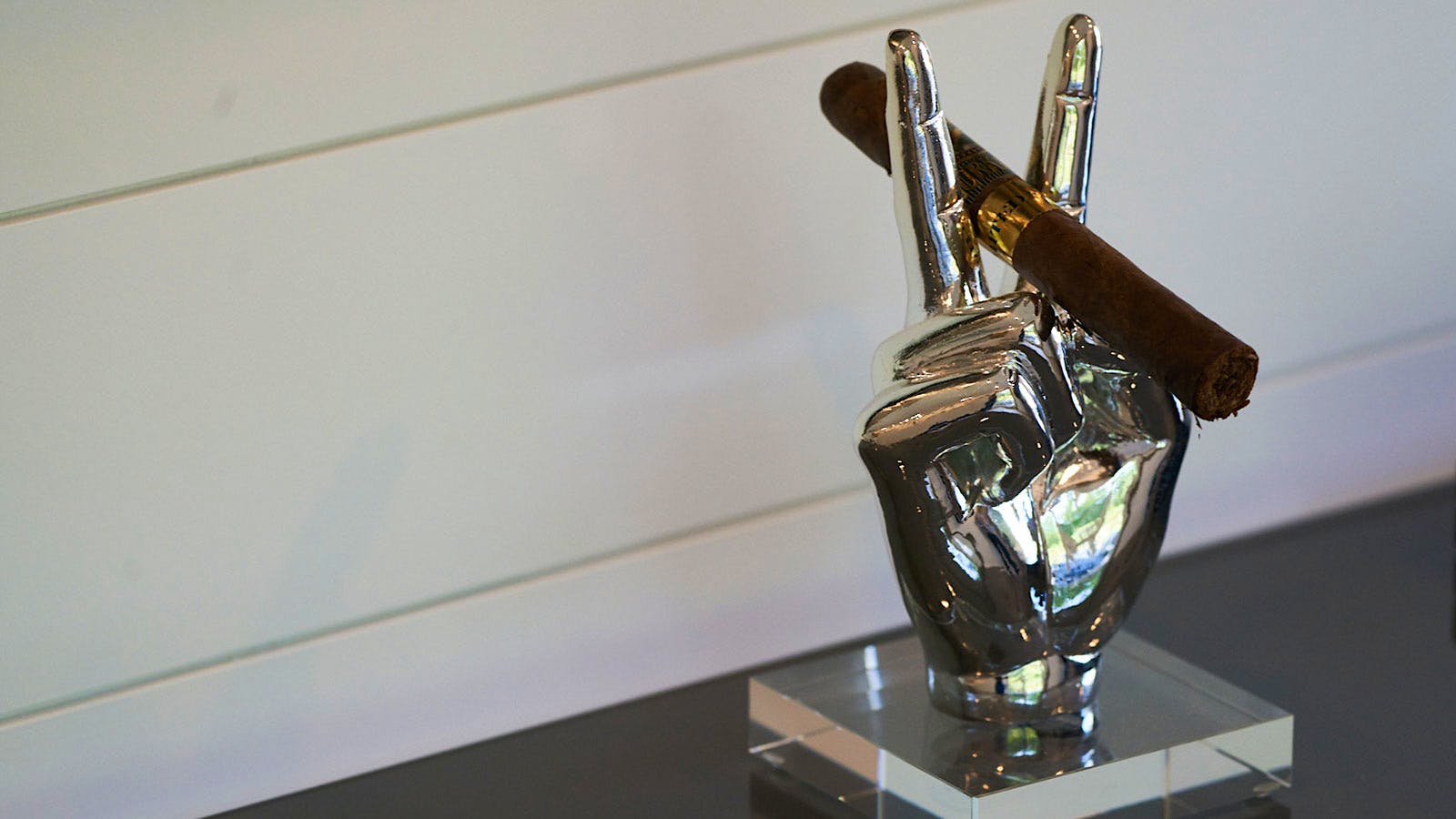 Having one’s own room for smoking is becoming more important. “Unfortunately, with the regulations there are less places you can smoke. And for people like myself who are avid smokers—when you get to the winter months here in the Northeast, where do you go to have a cigar?”

Huston had one more design requirement: nonporous surfaces. The decision was spawned, he says, by his experience as a member of a New York City cigar club: “It’s a wonderful place. But many of their couches and chairs are like suede cloth and they have carpet and the big velvet curtains—so as good as their [aeration] system is, you always smell smoke. So I wanted stone, wood, glass and metal.” Monetary outlay was of minor concern. Final cost? “In my head,” he says, “I had a number that I thought was $75,000 to $100,000.” It actually came to $250,000.

Another way to look at the project is as a sales feature when it comes time to divest of the property. “With too much inventory on the market in housing, having a separate cigar lounge could be the factor that gets a sale,” says Sciarretta, an award-winning builder. “In this market in Greenwich and Fairfield County, where the upper houses aren’t moving as quickly, unique features are what will get buyers [interested].”

So in a way, Huston can look at his man cave as another investment—that or the best anniversary present he ever had.

Kenneth Shouler is a frequent contributor to Cigar Aficionado.