Share
It’s the Cohiba humidor that broke all the records, commanding $2.6 million at auction. The Montecristo humidor beside it didn’t do too badly either. It sold for $470,000.

On the last night of the Habanos Festival, where more than 1,200 people from around the world were blissfully smoking the new Romeo y Julieta Línea de Oro cigars, nobody had any idea that this was going to be the last major cigar gathering for quite some time. Most didn’t know that they’d be returning to cities on lockdown with rising death tolls and depleted hospital supplies. All they knew was that a mysterious young man from China electrified the night by bidding more than 2 million euros on a humidor—and he won, setting an all-time auction record and making festival history.

Casually known as the Habanos Festival, the Festival del Habano is a yearly winter retreat for well-to-do enthusiasts from around the world who hold Cuban cigars in the highest regard. If you’ve never been, it’s a weeklong celebration of cigar culture where the Cuban government lets down its guard for a few days and grants access to the fields and factories responsible for producing Cuba’s most prized export.

In socialist countries like Cuba, where all business is government property, trade secrets are more than just privileged information. They’re considered a matter of national security, so this year’s visitations to the La Corona and Partagás cigar factories were, like all other years, closely monitored. Take all the pictures you want and puff to your heart’s content, but stay on the tour. Wander off or fall behind, and you’ll be politely escorted back to the group. Not that the tours weren’t informative and interesting. At both factories, a good portion of the cigarmaking process was out on full display from rolling to color sorting to box assembly. 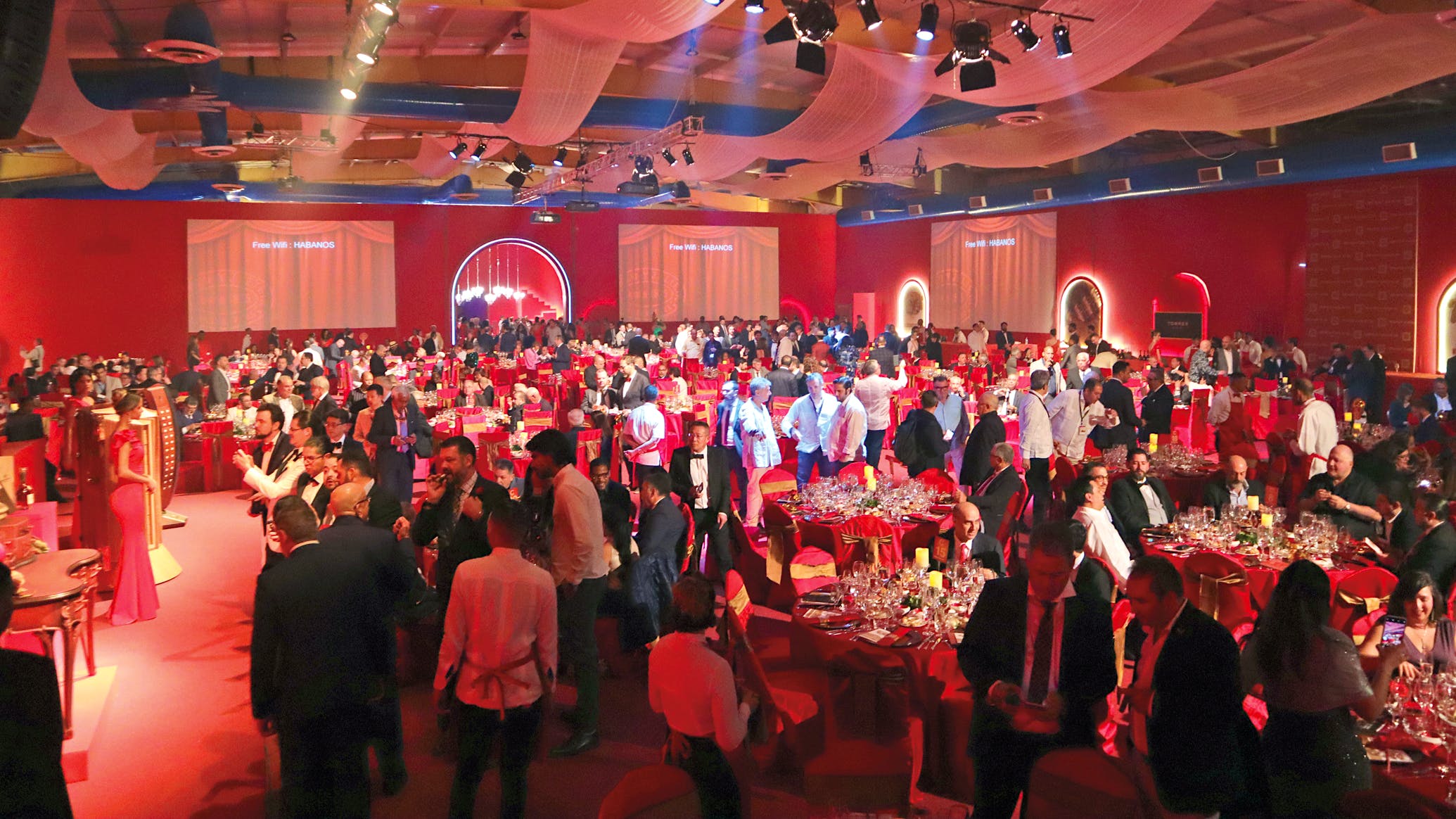 On the final night, sensuous shades of red played to the romantic theme of Romeo y Julieta. (Photo/Cigar Aficionado)

There was a clear and concentrated effort at these two factories to produce a high-profile smoke, the Cohiba Talismán, the 2017 Edición Limitada that Habanos put back into production late last year. Along with mostly robustos and pirámides, the fat, pigtailed Talismán cigars piled up on the rolling tables and overtook many of the color-sorting stations as well. That week anyway.

Each year, the festival serves as the launch for several new cigars that will come out at a later date, and Bolivar was the celebrated brand of the opening night. It’s a cigar that hasn’t received much fanfare, but that changed this year with the presentation of the Bolivar Belicoso Fino Reserva Cosecha 2016, the first time Bolivar has been part of the Reserva program. The new cigar was unveiled with a high-flying act of aerial acrobatics at Club Habana.

Other previews for upcoming cigars were equally intriguing (if lacking the drama of Bolivar) and many are tied to milestones. The Montecristo Herederos (6 3/8 by 47) celebrates Montecristo’s 85th anniversary while the Juan Lopez Selección Especial (6 7/8  by 54) honors the brand’s 150th birthday. Both will be La Casa del Habano exclusives to celebrate the chain’s 30th year in business. The Partagás 175 Aniversario humidor, a decorative box that holds 50 Tropicales (6 7/8 by 54) celebrates 175 years of the brand. There’s also a Partagás Legado Edición Limitada 2020 (6 1/4 by 48), the only Limitada announced at the show. Habanos says the other two will be announced in the future.

Habanos seemed to spare no expense for the festival’s final night, dedicated to Romeo y Julieta, which is 145 years old this year. Romantic shades of red made the large space of the PabExpo center seem rather intimate, even playful at times. The theme was a masquerade ball, and much of the staff played along, fully dressed in costumes and Venetian masks. Habanos co-presidents Inocente Núñez Blanco and Luis Sánchez-Harguindey simply wore suits when they took the stage to make the welcoming toast. 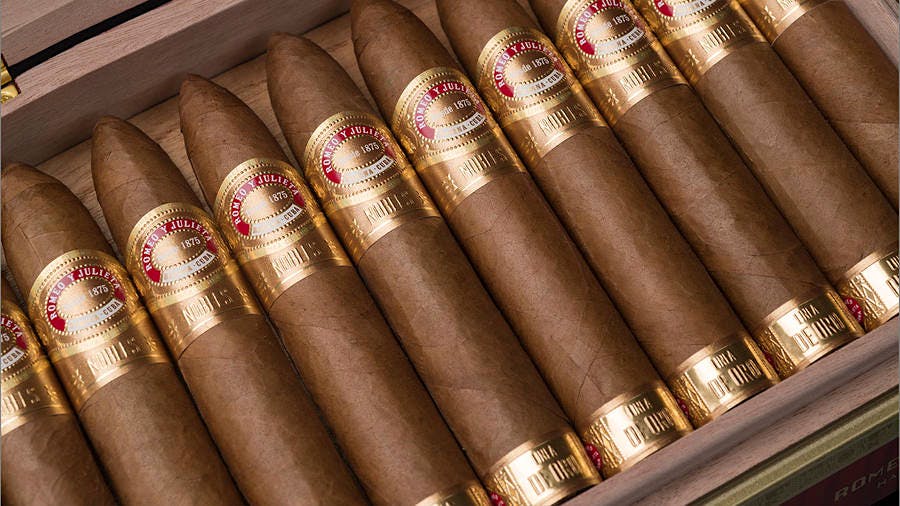 If all goes according to plan, we’ll see the new Romeo y Julieta Línea de Oro this year, the most full-bodied Romeo line ever released. Think of it like the Montecristo Línea 1935 or the Cohiba Behike—super premium extensions of well-established brands. The new Romeos come in three sizes: Dianas, 5 3/4 by 52; Hidalgos, 4 7/8 by 57; and a fat belicoso called the Nobles, 5 3/8 by 56. There’s no word on release date or price, but they’re not going to be cheap.

It may have been Romeo’s night, but the show was stolen by Cohiba. This year’s humidor auction raised a record-breaking amount of money, most of it coming from one person.

Nobody thought much of it when Li Thet purchased the first lot for 380,000 euros ($412,346). It was a high bid but the auction is no stranger to six-figure sums. That lot centered around a cabinet of 100 Ramon Allones made just for the United Kingdom in 2015 to mark the 225th anniversary of the country’s distributor Hunters & Frankau. In an impressive series of bids for the next two lots, Ali Almansoori of the United Arab Emirates won two extravagant humidors. He took the H. Upmann humidor, complete with 355 cigars, for 270,000 euros ($301,000) and also the Partagás humidor, which came with 390 cigars, for 400,000 euros ($447,000).

What came next was unprecedented. After spending nearly $1 million already, Li returned to the auction and refused to be outbid for the final lot: a strangely convex, vertical chest of drawers filled with 550 Cohibas, including rarities such as Cohiba Majestuosos 1966 (see page 82 for a rating), Behike BHK 52s, Cohiba Novedosos and Cohiba 1966 Edición Limitadas (see Connoissur’s Corner for a rating on page 86).

The back-and-forth bidding captivated the entire room as the humidor soared past 1 million euros and concluded at 2.4 million euros ($2.6 million)—by far the most ever bid for one lot at the festival, and likely the most expensive humidor ever auctioned.

All told, the auction raised nearly 4.3 million euros ($4.8 million), money that is slated to go to Cuba’s healthcare system.

We don’t know much about Li. He didn’t stick around for press interviews or photos and left the red ballroom immediately after the auction, along with his entourage of attractive women. He certainly didn’t stay for the evening’s grand finale—a full concert by disco icon Gloria Gaynor—which didn’t start until 1 a.m. And even after the concert had ended, after ties were loosened and tuxedo jackets discarded, the night was only beginning for those tireless revelers in search of the next party, hoping to make the most of their last night in Havana.

Cuba’s Hotel Saratoga, a high-end property in one of the busiest and most famous areas of Havana, was …

Little known to American cigar lovers, Phoenicia Trading is one of the world’s largest distributors …