If you’ve read the August 2022 issue of Cigar Aficionado (which you should have), you might have noticed the absence of Woodford Reserve in the article “The Proof is in the Whiskey.” That’s because the distillery’s annual release of its Masters Collection Batch Proof series, usually released in the spring, was held up this year by late-arriving glass bottles and therefore not available by press time.

That’s since changed, and we (happily) have tasted the new whisky.

“It’s great to have this finally out,” master distiller Chris Morris says of the annual, limited-edition Bourbon that is bottled at full proof. “It’s been a few months too long.” This year, the permanent member of the Masters Collection is presented at 118.4 proof and numbers 1,400 cases.

For those who haven’t read the print article, whiskey is typically distilled at much higher alcohol levels than the proof you find at the liquor store. Water is added to the spirit during production, lowering strength, sometimes to 80 proof (40 percent alcohol by volume), the lowest level allowed for a distilled beverage to be called a whiskey. However, many makers now release examples that are full proof, or well above 100 proof. And customers are very interested in sampling whiskey that way.

Morris explains the allure of such Bourbon as “an opportunity for the consumer to taste Woodford in the way we taste it before it’s reduced to 90.4 proof.” 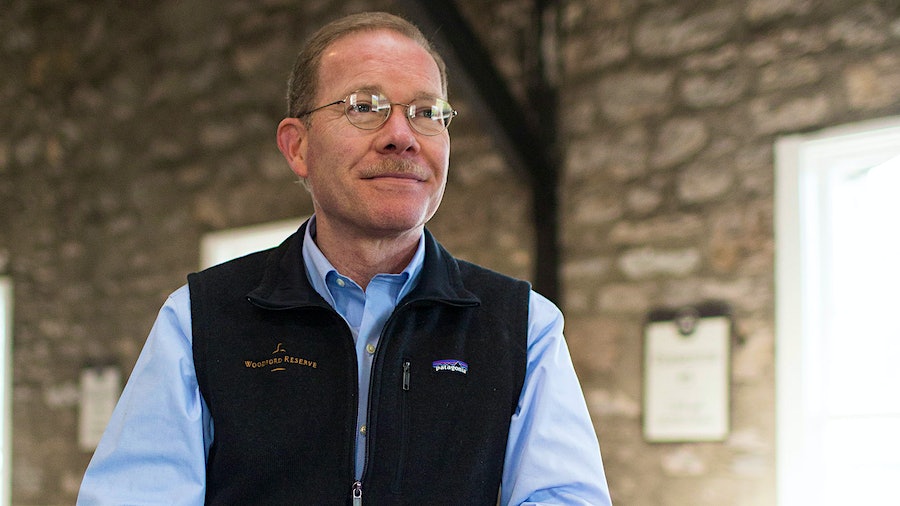 Master distiller Chris Morris has eagerly awaited the release of this annual, limited-edition Masters Collection, originally set to come out in the spring.

Morris says the high-proof process begins the same way as standard Woodford does. “We build the batch out of approximately 120 barrels based on the flavor ratings of the individual barrels.” Each barrel has its own flavor profile from which a composite is built to replicate the familiar Woodford taste. “But the barrels might have a different idea,” says Morris. That’s because, at that stage the proof is too high to know exactly what it will taste like when diluted. The next step is to bring a sample down to 90.4 proof. If it doesn’t taste like Woodford, it is adjusted.

With High Proof Woodford the last step is eliminated. So with that version, Morris says, “you might find that it doesn’t taste exactly like Woodford—which is the fun part.”

Woodford differs from most Bourbon in that it combines both copper-pot-still and column-still whiskey. The former is triple-distilled to 156 proof; the latter is double-distilled to 140 proof. Water is added to take each down to 110 proof. Each type is then aged separately, before being batched together. “And whatever the barrel proof ends up at, that’s it,” Morris adds. Barrel proof typically rises during aging due to evaporation, called angel’s share. However, Morris says that much of this batch was taken from the lower floors of the warehouses which have a “more relaxed angel’s share.” He attributes that to this year’s edition having a lower proof than in the four previous years.

Woodford is made in the restored Labrot & Graham distillery, a 19th century facility distinguished from most Bourbon distilleries by the use of masonry warehouses that are heated in the winter. In 2014, the company expanded aging capacity by building a series of new warehouses, 10 miles away, but still in Woodford County. The new buildings hold 55,000 barrels each. The oldest, built in 1890 at the original Labrot & Graham, holds 5,000.

Lack of “heat” is not an issue for this Woodford specimen with its alcohol percentage at 59.2. While the flavors are intense, so is its fire. No one will fault you for sampling it at different speeds. Morris himself says: “Some like it with a little bit of water, some want it neat. I drink mine with a couple of ice cubes. I let it settle down some.”

Read Next: Tequila is Hot!