Do you wake up in a cold sweat, dreaming about smoking a 1492 from one of the 500 humidors released in 1992? Or getting your hands on a Dunhill Estupendo from the 1980s? Or just imagining a pristine box of Cohiba Behike BHK 52s from 2010, when it was named Cigar of the Year, sitting in your humidor?

Those cigars have come and gone at auction in the United Kingdom, and if money is no object, they could be yours, assuming they ever come back up for sale. The 1492 went for $31,000 for the box of 50 back in 2018, averaging out to $637 per cigar. The Dunhill Estupendo exceeded that price per cigar back in 2012. Six loose Estupendos sold for the equivalent of $1,077—each—at the time. The Cohiba Behike BHK series (in any ring gauge) were selling for around $200 per cigar in 2018, especially if the box carried the 2010 box code.

Those three cigars are among the highest ever rated in the pages of Cigar Aficionado. The Cohiba Behike BHK 52 scored 97 points as Cigar of the Year, even when still young; the 1492 was nearly flawless at 99 points (Connoisseur’s Corner, June 2015) and the Estupendo achieved perfection at 100 points (Connoisseur’s Corner, December 2012). Other cigars that have produced high bids include any Hoyo de Monterrey Double Coronas or Partagás Lusitanias from the early ’90s, all Cuban Davidoffs and, of course, the iconic Montecristo No. 2s from the pre-boom era. These cigars are some of the most sought-after smokes in the small but active auction market.

“[Our customers] are buying because the platform is for cigars that have, in the main, sold out from the retail channel,” says Rob Fox, one of the principals in Bond Roberts, a fairly new auction service. “It’s clear some are buying to finally get that one box they’ve been looking for, but they generally are buying to smoke.” 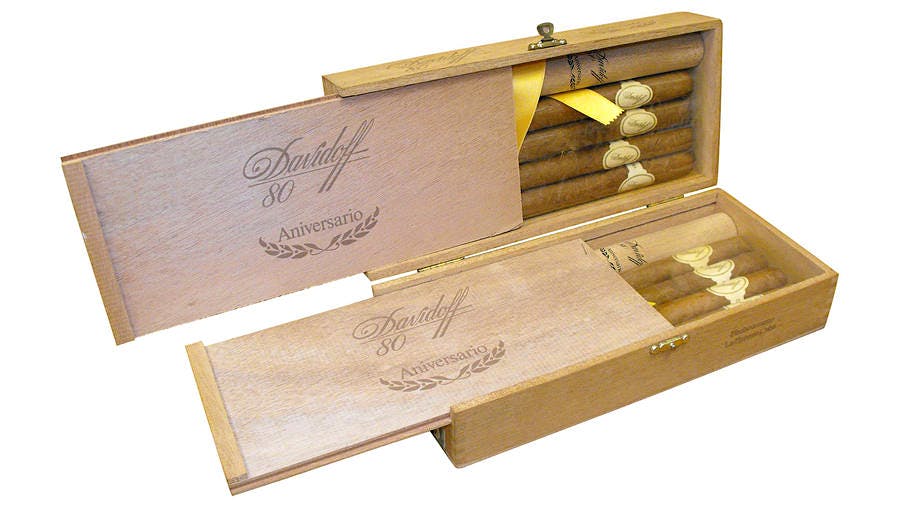 Vintage Cuban cigars like this Davidoff 80 Aniversario are some of the most coveted smokes in the auction world. (Photo/C. Gars Ltd.)

Mitchell Orchant, the managing director of C.Gars Ltd., an online cigar seller founded in 1997 with a long history of auctioning vintage cigars, says that “In general terms, [each sale] is split between smokers and collectors. And many of the unicorns such as rare Dunhills, Davidoffs and limited-edition humidors are in fact picked up purely for smoking pleasure and not collecting.”

The auction market remains active, with sky-high prices. Orchant says Cohiba limited editions get frequent inquiries. “The demand from the Far East is insatiable and the increase in values, substantial. I would also add the elusive Cohiba BHKs, 52, 54 or 56, especially any with 2010 box codes.” He runs down a list of prices that have been paid in his private sales: A Cohiba 30th Anniversary humidor with 50 cigars sold for $52,000; a 40th Anniversary Elie Bleu humidor holding 40 of the original, individually numbered Cohiba Behikes fetched $156,000 and a Cohiba 50th Anniversary humidor with gold-leaf cabinet doors and 50 Cohiba 50 Aniversario cigars recently sold for $455,000.

“Cohibas three to 10 years old are the listings that receive the most attention and the most bids,” says Fox. But he’s been surprised by the prices paid for some of the Regional Editions, such as the Asia Pacific Por Larrañaga Encantos from 2010 and Italy’s La Escepcion Selectos Finos from 2011. He says the top prices so far on the relatively new Bond Roberts auction site have been $12,000 for a 15-count box of the 2009 Cohiba Siglo VI Gran Reservas (99 points, Connoisseur’s Corner, April 2020), and a box of 15 Partagás Lusitania Gran Reservas from 2013 that sold for $2,000.

While some U.K. retailers stocked vintage cigars in the past, the two primary auction sites operating today rely on private collectors who are selling off their inventory or through estate sales. Both C.Gars Ltd. and Bond Roberts say they carefully check the provenance of cigars they’re selling, and also build relationships with sellers to ensure the buyer gets exactly what he’s paying for.

“The seller’s reputation is crucial as it points to commitment and care in storage and original sources,” says Fox. “The back story to the box being sold is essential as are the attributes on the box—the serial number, the box code and the full set of packaging.”

Orchant says it is just as important to keep track on the buyer side of the equation. “We have a credit control department that vets bidders and sets a bidder’s credit limit. Payments are received in full before the winning bidders can come to collect their lots,” Orchant says. 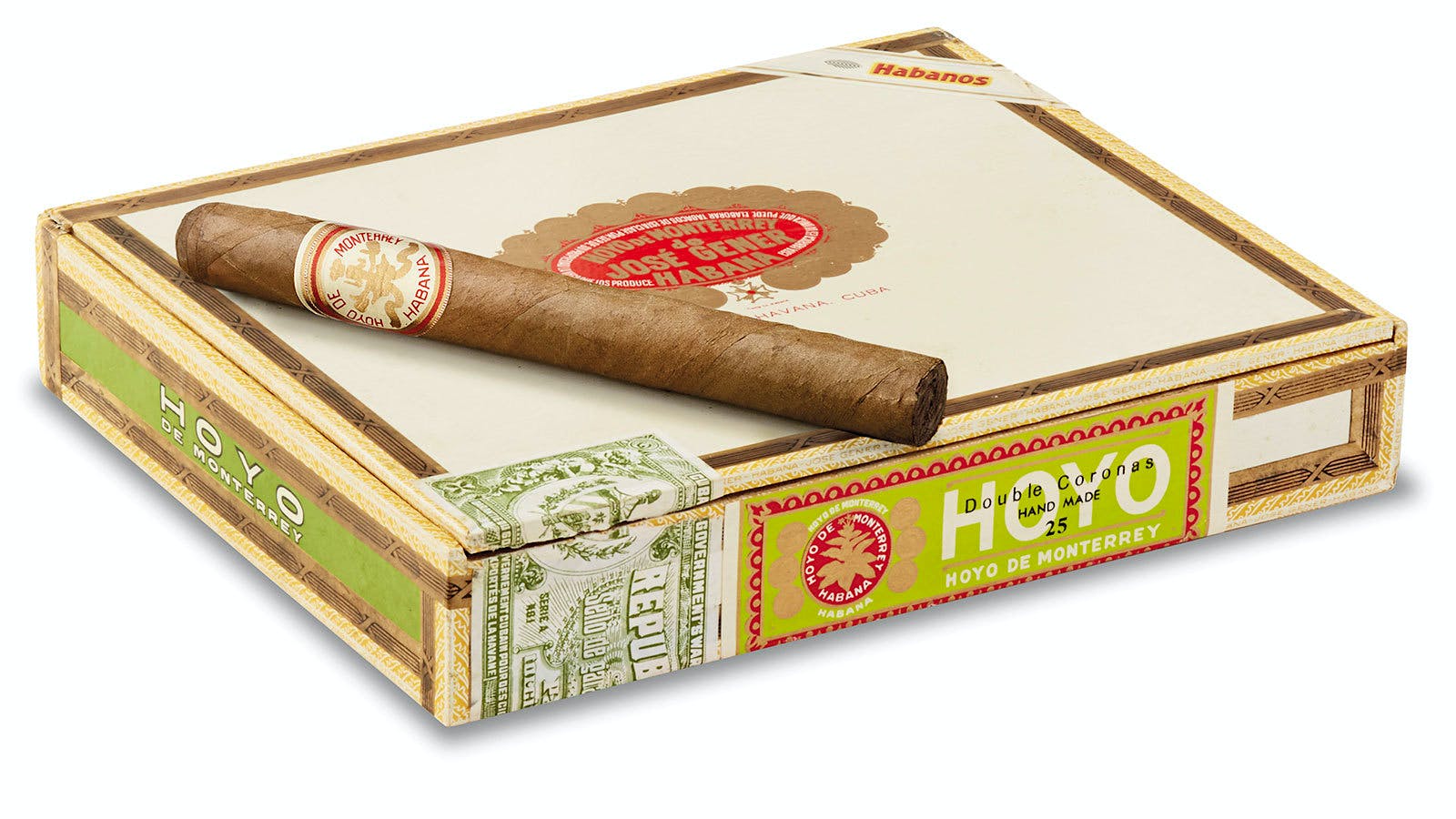 When you think of superb, big cigars, this one immediately comes to mind, for Hoyo Double Coronas are a benchmark for that Cuban size. (Photo/Cigar Aficionado)

Fox says that “there is a high level of loyalty on the platform once a buyer or seller gets set up.” He says that the focus of the auction is for people seeking cigars that are no longer readily available. “Consumers seeking to lay down cigars for a long-term investment can source them on the primary market, directly from stores, at lower prices then those achieved on Bond Roberts.”

But each auction house has a wish list of cigars they’d love to have more of. For Orchant, it’s a full set of the Colección Habanos, top export brands packaged in special book-shaped boxes; any of the antique replica humidors produced by Habanos; and any U.K. Regional Editions, which he says are the fastest selling cigars: “Our whole allocation is gone within 48 hours.”

When asked what he’d order if he could get 100 boxes of any cigar, Fox replied that he would prefer 100 different boxes rather than 100 of any single cigar, but there are some white whales he wouldn’t turn down: Partagás Lusitanias from the early ’70s with a slightly tapered “109”-style head; Por Larrañagas in cabs of 50 or La Flor de Cano Short Churchills.

“Naturally, I have a strong emotional connection with the old Fox [house] brands,” Fox allows. “The Partagás Fox Selection No. 1, which was the same size as the Lusitania, or the Punch Néctares brand which was our best seller when it was discontinued.”

Apart from Bond Roberts and C.Gars Ltd., the cigar auction universe has shrunk in recent years. At one time, both Christie’s and Sotheby’s, the world’s most prestigious auction houses, held one or two Cuban cigar auctions a year in London. No more. Christie’s held its last London cigar auction in 2008. Vintage cigar auctions never gained traction in the U.S. Most American enthusiasts smoke current-production cigars and the so-called auction sites are mostly clearing houses for retailers’ excess inventory instead of a channel to acquire old cigars.

Five small farms in Western Cuba grow some of the finest cigar tobacco leaves in the entire world.