Things get busy after lunch, right around two o’clock, at The Cigar Warehouse in Sherman Oaks, California. And that’s a good thing. Business is back and up around 15 percent over pre-pandemic times. The humidor continues to be among the best in California and the store claims to be the top seller of Davidoff cigars in Los Angeles County. There is little resistance to rising prices among the higher-end brands, explains owner Saiid Karroum.

“When Covid started, things were a bit rough, slow at the beginning,” says Karroum, referring to the time between March of 2020 and January of 2021. The shop never closed, but people didn’t go there to smoke during those months. “Later, people had money and bought a lot of expensive cigars—2021 was phenomenal.”

The store, which Karroum and his brother bought in 2012, never went away, and now it’s back better than ever. After the vaccines became available, patrons returned to the shop and smoked, resting comfortably in one of the overstuffed leather chairs in the 3,600-square-foot store and lounge. The TVs are still on, with many watching golf on a late, sunny afternoon. Basketball season was just starting, but most were talking—bragging—about their latest round at the local links. 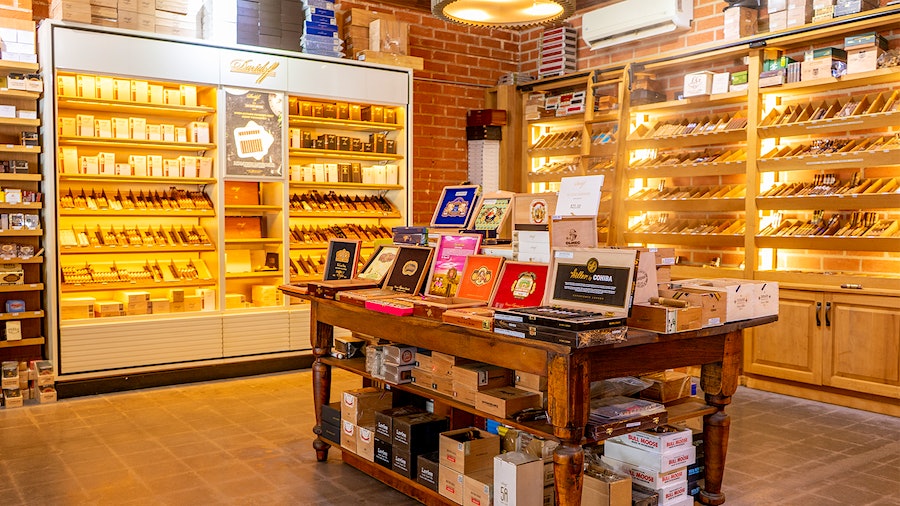 “We’re very busy during football games,” Karroum says. He and his brother own four cigar stores in the southwest. In 2020, shortly after the lockdowns began, they started a mail-order business, PerfectCigarBlend.com, to try to pick up the slack of the early months of the pandemic. A back room in the store was converted into storage for the inventory. Karroum says the new venture was doing well, outpacing sales at the Sherman Oaks location itself. There have been some other changes.

In 2019, a car crashed through the window of the store, around four in the morning, and ruptured a water pipe, causing extensive damage to the floor. That brought a new layout of the seating on the floor. The pandemic’s residual effect has reduced the number of cigar events by manufacturers in the store. During the lockdowns, Karroum recalls, they held online events over Zoom, with cigarmakers explaining the virtues of their products. Sales were pretty good during those virtual gatherings.

Today, The Cigar Warehouse hosts 40 or more customers on most afternoons. The humidor continues to carry more than 100 different choices, still with few boutique brands. New offerings include a Davidoff Palmyra, a limited-edition Toro made exclusively for The Cigar Warehouse. There’s the Plasencia Alma Fuerte Colorado Claro Eduardo I, as well as some new (and expensive) Atabey cigars. Finding a cigar you‘ll like is very easy.

“The best sellers are still Padrón, Fuente and Davidoff,” according to Karroum. “They sell themselves.”

The good pizza shop is still open across the boulevard. A new, better espresso shop opened a block away and Anajak Thai two blocks down was recently named the best restaurant in LA by the Los Angeles Times. The pro move is to snag a reservation for dinner (if you can) and enjoy a cigar or two beforehand at The Cigar Warehouse to build your appetite. And then maybe one afterward as well.