Prohibition came early to Nashville, in 1917. Once the number four exporter of liquor in the United States, suddenly production and sales went underground. Politicians took to their illicit “clubs” along Printers Alley to make deals over whiskey and cigars, while doyennes of society had their “medicine” delivered to the back door of their Georgian mansions via taxi. The newly opened cigar-friendly Red Phone Booth in Nashville harkens back to the speakeasies of that time.

The Red Phone Booth’s Nashville experience begins with the need for a special telephone number that's only available by emailing the venue's website or one of three ways: from a Red Phone Booth member, from someone who knows the number, or from a concierge at a hotel where you are staying. The number is rotary-dialed while standing in a lone, red telephone booth at 136 Rosa L. Parks Boulevard, just off of Broadway in the heart of downtown. The clandestine method of entry makes the experience feel authentically naughty, with, as one guest said, a touch of Harry Potter and James Bond.

Behind the hidden entry door is a step back in time with the exposed brick walls of the 100-plus year old building, and the golden glow of diffused light coming from the glass panels in the ceiling hand painted by Star Wars still artist Christian Waggoner. The art deco honey-onyx bar is the focal point of the room, where drink mixing is raised to an art form. 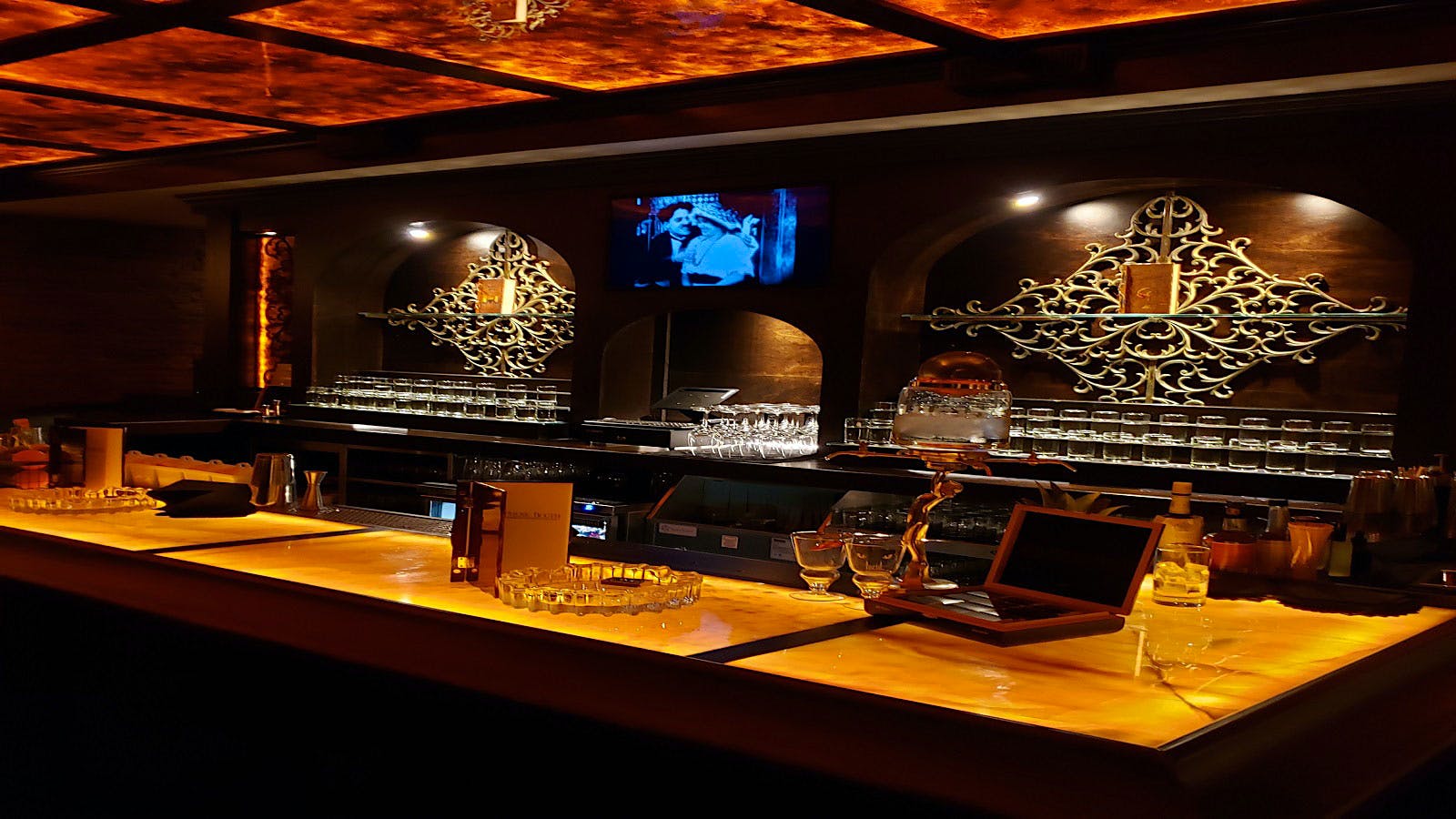 The honey-onyx bar is the focal point of the room, where drink mixing is raised to an art form.

Sleek, Italian leather couches designed to look like club chairs are placed on either side of low-slung wood tables where members and guests can reserve a place to sit and enjoy one of their mixed drinks and a cigar. In the back of the establishment there is a room offering pool tables. Where once there might have been illegal gambling, today it may be rented out for private parties.

Stephen de Haan, one of the owners, came up with the concept to honor his grandfather. “When I was in my twenties, bartending at a popular theme restaurant, a trip to visit my grandfather ended up changing the course of my life. He was a pharmacist by trade, but he had a love of cigars, fine liquor and the club etiquette of the 1930s and 1940s. The Red Phone Booth is a tribute to my grandfather. We even call the bar, ‘the pharmacy,’ and liquor, ‘medicine,’” he says. A sign it was meant to come to Nashville.

What de Haan learned from his grandfather permeates every element of the club—from the rules of etiquette telling men to wear a jacket if they want to get inside, to the gourmet snacks, to the quality of the 100+ cigars available for purchase, to the finely crafted cocktails.

Barkeeps dance a ballet as they blend old-school cocktails, such as the signature Smokey Old Fashioned that’s imbued with hickory wood set ablaze before your very eyes. Just the right blend of flavors touch the taste buds, with a lightly smoky finish. Each cocktail is made with hand chipped, double-reverse pass osmosis ice, using fresh-squeezed juices and more than a dozen tinctures, bitters and flavoring agents. A collection of some of the rarest liquors are also available, including Japanese Scotches Yamazaki (up to 18 year) and Hibiki (up to 21 year), Scotches from the Macallan 1824 series, the entire Buffalo Trace Antique Collection, and Pappy Van Winkle (10 year up to 25 year). 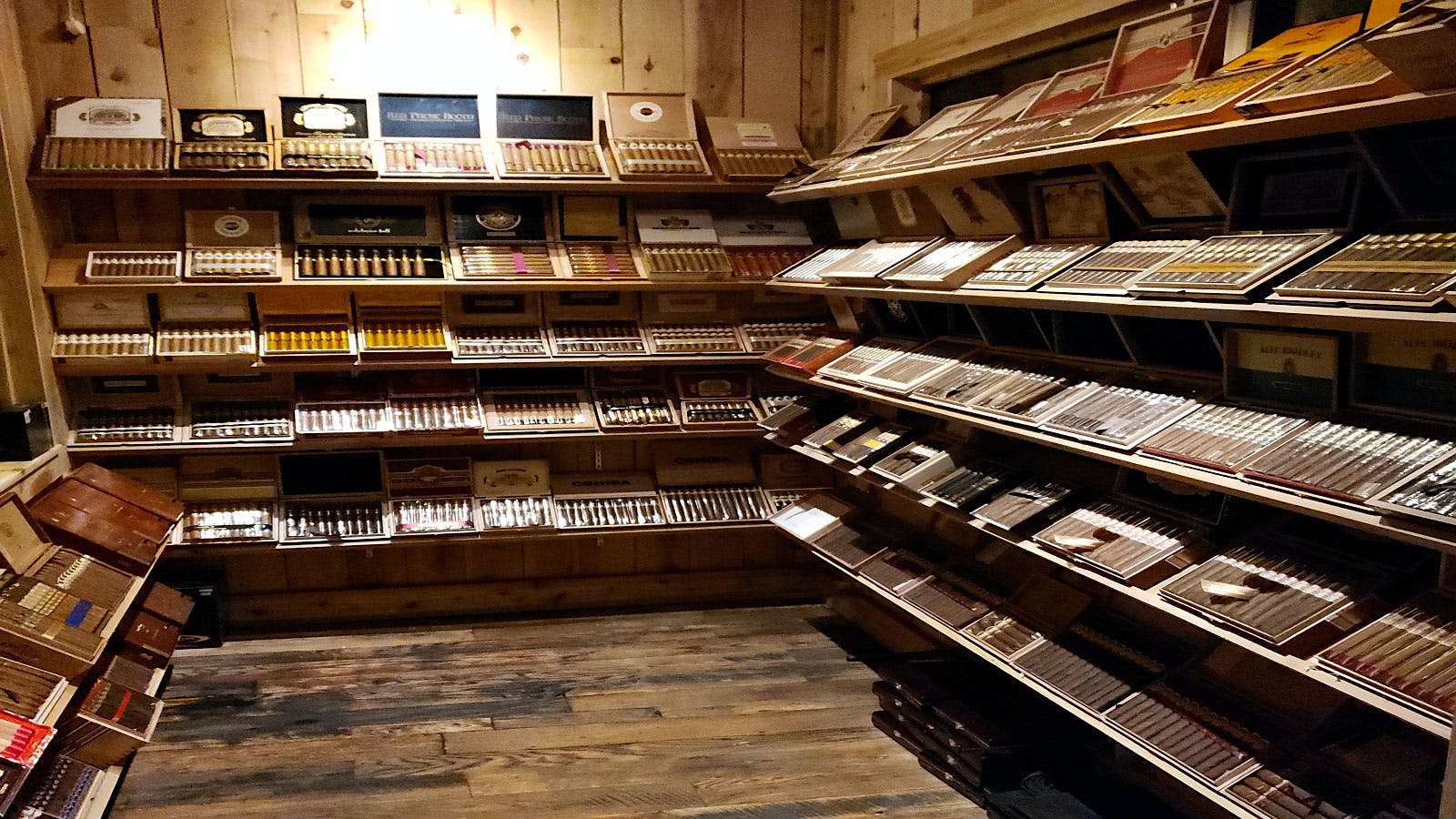 The humidor is well-stocked with more than 100 different cigars.

A menu of small plates is highlighted by the Neapolitan pizza, of which de Haan is especially proud. He went to Italy to learn how to make it from the experts and imported a special oven that bakes it in 90 seconds. “The key to eating it properly,” said de Haan, after pulling a freshly made sample from the oven, “is to roll the tip of the pizza inwards and then eat it like a rolled sandwich.”

What de Haan and his partners want is to create a place that feels like home, which is what they did for actor and unabashed cigar lover Michael Cudlitz. Cudlitz felt that the original Red Phone Booth in Atlanta, Georgia was his “Cheers” while he was there filming “The Walking Dead.” When the opportunity became available to become a partner in the Nashville endeavor, Cudlitz jumped aboard.

“Everywhere I travel,” said Cudlitz, “there is no place like The Red Phone Booth. All my needs are met there.”

Cudlitz, who enjoys both fine whiskey neat and great cigars, steps into the walk-in humidor near the bar to reach for an Arturo Fuente Hemingway. But, with more than 100 always changing offerings available, there is something for everyone, from an Arturo Fuente Hemingway Short Story ($16), which de Haan suggest for those new to cigars, to a Liga Privada ($32) or a La Flor Dominicana Andalusian Bull ($35), Cigar Aficionado’s 2016 Cigar of the Year. There’s also a variety of smokes from Rocky Patel, Diamond Crown, Ashton and Macanudo.

The 18th Amendment cigar ($14) was created especially for The Red Phone Booth. It offers Dominican and Nicaraguan tobaccos in a Brazilian Arapiraca maduro wrapper. Topped with a pigtail cap, the cigar has a medium to slightly full flavor with a touch of leather and spice. 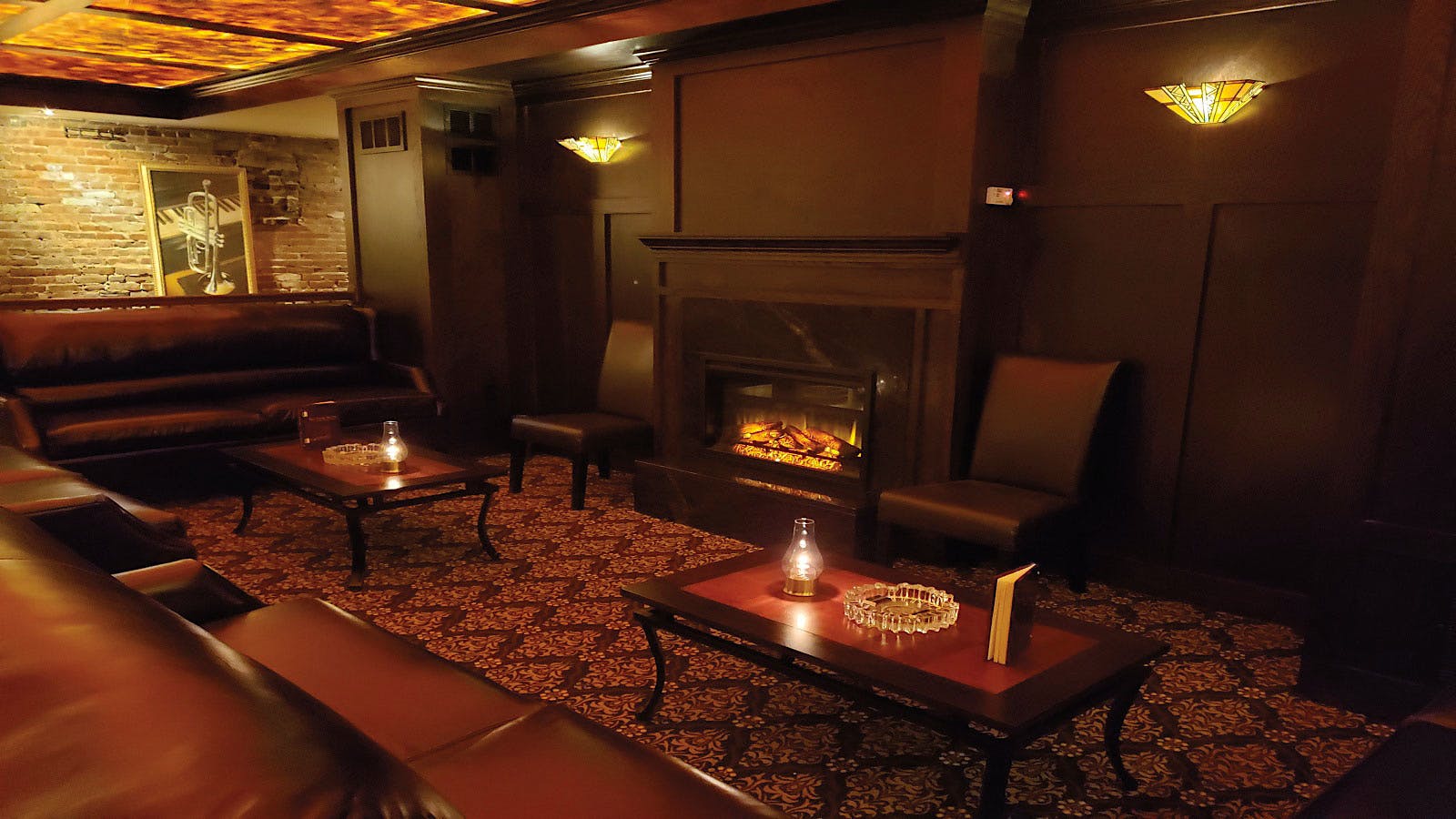 Sleek, Italian leather couches designed to look like club chairs are placed on either side of low-slung wood tables where members and guests can sit and enjoy their drinks and cigars.

“What draws me to the place is the ability to have a cigar,” said Cudlitz. “They are not a pariah here. [Cigars] are not the same as cigarettes. They create a completely different atmosphere.”

The atmosphere is inviting to cigar lovers, and those who don’t smoke thanks to a 100 percent fresh outdoor air system accompanied by five large air purifiers to ensure little to no smoke in the air. This system scrubs the air constantly, completely replacing it every five minutes.

Exclusive events offered monthly provide another incentive to visit, including tastings and discussions with master distillers from the likes of Angel’s Envy, Four Roses and Pappy Van Winkle.

Memberships are available for corporations ($1,500) and individuals ($250). Reserved seating and special humidor lockers are part of the membership, as well as discounts and priority entry.

“Great things are happening with Bourbons and whiskeys,” said Cudlitz.  ”It is a great time to be involved in [The Red Phone Booth]. You can make it your own, and have a great time. Check it out, it you hate it don’t come back.”