When word got out that longtime industry veteran Eladio Diaz had left Davidoff last year, many cigar fans—both in and out of the business—wondered where the talented tobacco man would resurface. They’ll be glad to learn that he’s back in the cigar industry with his own factory, and the first product to come off his rolling tables is a limited edition for Freud Cigar Co., a subsidiary of cigars-and-spirits startup Agape Lifestyle Inc.

Cigar Aficionado spoke with Freud co-founder Luis Torres and Eladio Diaz (with Torres translating) who are both quite enthusiastic about the upcoming project. The new cigar is called Freud Cigars Agape Limited Edition and is made at Diaz’s new factory Tabacalera Diaz Cabrera in the Dominican Republic. It’s a single-size release and is composed entirely of Dominican tobaccos.

According to Torres, production started in the fall and 35,000 cigars have already been rolled, all of which are scheduled to start shipping directly after this summer’s PCA trade show.

“This is the opportunity of a lifetime,” said a visibly excited Torres. “I can’t tell you how happy I am to be working with a global legend like this. The fact this all came to be was perfect timing on every level.” 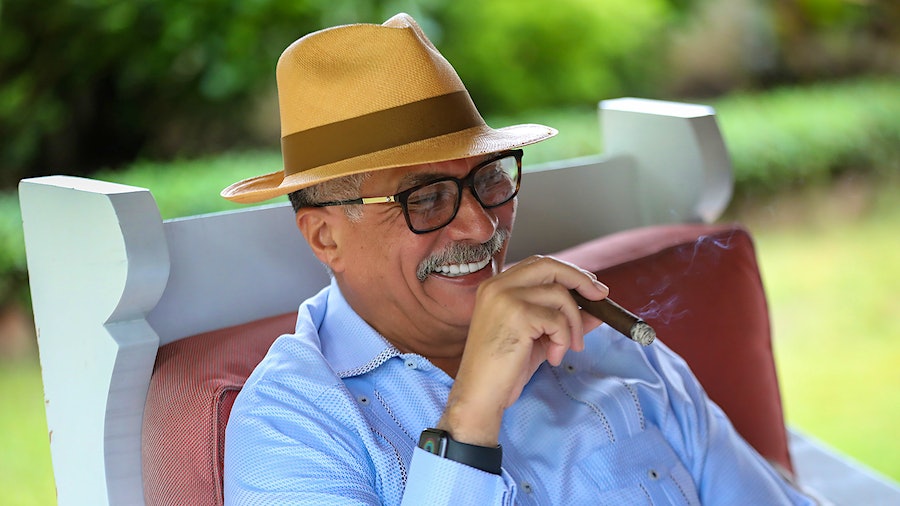 Tobacco veteran Eladio Diaz is now producing cigars at his own facility in the Dominican Republic. (Photo courtesy of Eladio Diaz)

Diaz, 68, has worked in the tobacco industry since he was a child. He joined Tabadom in the 1980s, the Dominican factory started by Hendrik Kelner and the primary production facility for Davidoff of Geneva. He was the longtime head of production and quality control for Davidoff until his tenure with the Swiss company ended last August. In January, Diaz opened his factory in the Dominican Republic, and this will be the first cigar that he’s produced commercially since departing Davidoff.

“It’s my dream to be on my own. I gave Tabadom 38 years,” he said. “I wanted to give my children a legacy and this is the start. I’ve worked in tobacco for 62 years, and have never worked in anything that isn’t tobacco.”

With five pairs of rollers, Tabacalera Diaz Cabrera is located in Santiago alongside most of the country’s handmade cigar industry. Joining Diaz at the company are two of his sons as well as his wife.

As for retail prices and the size of the new cigar, Torres isn’t divulging that information yet, saying only that the Dominican puros will come in 10-count boxes and confirming that the entire production of 3,500 boxes has been rolled. He isn’t unveiling the entire cigar yet either, offering only the sneak-peak shown above, calling this project “a love letter to the craft.”

Like the Freud SuperEgo, which is Agape’s debut brand, this limited edition will be distributed by Illusione Cigars out of Reno, Nevada.