Cuba threw a huge party in February centered around the 50th birthday of the Trinidad brand, but that golden anniversary left many people scratching their heads. For most of its history Trinidad was shrouded in secrecy and mystery. It didn’t become widely known until the 1990s, and the cigar as we know it today has only been sold since 1998.

The first mention of Trinidad in the pages of Cigar Aficionado came in Autumn 1992, the first issue of the magazine, as a sidebar to a feature story on Cohiba. Called “Trinidad: The Best Kept Secret in Cuba,” it was the first time that many people had heard of the brand, including some people in Cuba’s cigar industry.

“This cigar is so secret,” the article stated, “that few individuals, including executives at the government-run Cubatabaco, are aware of its existence.”

At the time, Trinidads were made in one size only, a 7 1/2 inch-long by 38 ring gauge lancero that mirrored the dimensions of the Cohiba Lancero. The cigar was not created to be sold, but only to be given as a gift by Fidel Castro, the leader of Cuba at the time. 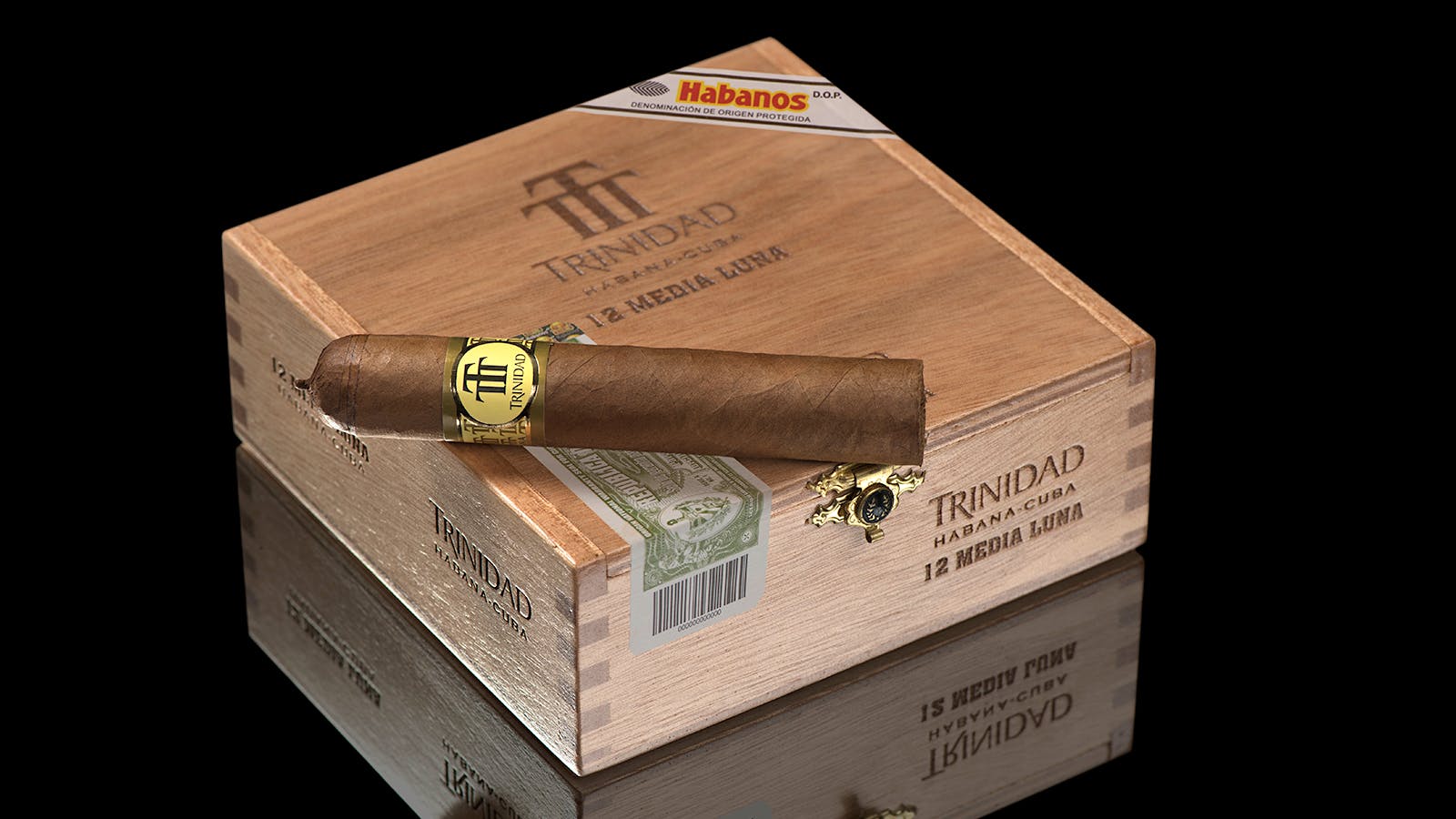 Castro’s original cigar of choice for gifting was Cohiba, a brand that was created in Cuba in 1966. It first went on sale in 1982. According to Habanos records, the first Trinidads were rolled in 1969, and for a time both Trinidads and Cohibas “were used as state gifts for high-ranking foreign dignitaries.”

In the early ’90s, the cigars—which were referred to as Diplomatic Trinidads—came in plain, cedar boxes, each one containing 100 cigars. They were never put in stores. El Laguito made some 2,000 Trinidad cigars a month, or 20 boxes.

In October 1994, two years after the first story on Trinidad, Cigar Aficionado editor and publisher Marvin R. Shanken hosted an event dubbed “The Dinner of the Century” in Paris. It was a night of fine dining, fine wines and rare cigars, including Trinidads, which were the first cigar passed out that evening. Several boxes were auctioned off that evening for charity, at stunning prices—some sold for as much as $700 per cigar.

A story published in the January 1996 issue of Cigar Insider (at the time, the newsletter was published only once a month) noted a change in Trinidad production; the cigars went from boxes of 100 to boxes of 50, and where they were once unadorned, these boxes now had golden labels on the inside of the lid. A small number were also made in boxes of 25. An official from Cuba’s cigar company, when asked if the change meant the cigars were being prepared for market, said “no comment.”

While Diplomatic Trinidads never were sold in cigar stores, a few people were able to buy them at auction—for exceptionally high prices. In the mid- to late-1990s, as cigar sales boomed across the United States and then worldwide, cigar auctions of aged Cuban cigars began to take place on a regular basis. While the 1994 Dinner of the Century marked the first time Trinidads were sold at a charity auction, the first time they were sold at a commercial auction was May 1997, when a box of 25 sold at Christie’s in Geneva for 16,100 Swiss francs ($11,400 at 1997 exchange rates), shattering the pre-sale estimate of 5,500 to 7,500 Swiss francs. That translates to $456 per cigar.

“Bloody hell,” said Simon Chase, at the time marketing director for Hunters & Frankau, the company importing Cuban cigars into the United Kingdom, when told of the price.

The Trinidad family tells a different story about the origin of Trinidad, and claims the cigar brand is even older than what Habanos claims. Diego Trinidad founded Trinidad y Hermanos in 1905 as a tobacco company. Diego Trinidad Jr. took over the family business in 1920, incorporated it in 1958 and renamed it TTT Trinidad. The company produced panatela-sized cigars and cigarettes, but like so many other tobacco and cigar concerns in Cuba, it was confiscated a few years later after the Revolution.

After leaving Cuba for the U.S., the Trinidads contracted the Fuentes to make a non-Cuban Trinidad cigar. The first were rolled in Tampa in 1968, but when the Fuentes moved their production abroad roughly ten years later, they ceased making Trinidads.

In 1997, when cigar sales were booming in the U.S., the Trinidads and Fuentes joined together once again to make a Dominican Trinidad, but that relationship too was short lived.

The Trinidads sued Cuba in U.S. courts for the right to sell Trinidads in the U.S., a battle they won in 2001. In 2002, they sold the brand and its U.S. rights to Altadis U.S.A., which make non-Cuban Trinidads to this day. 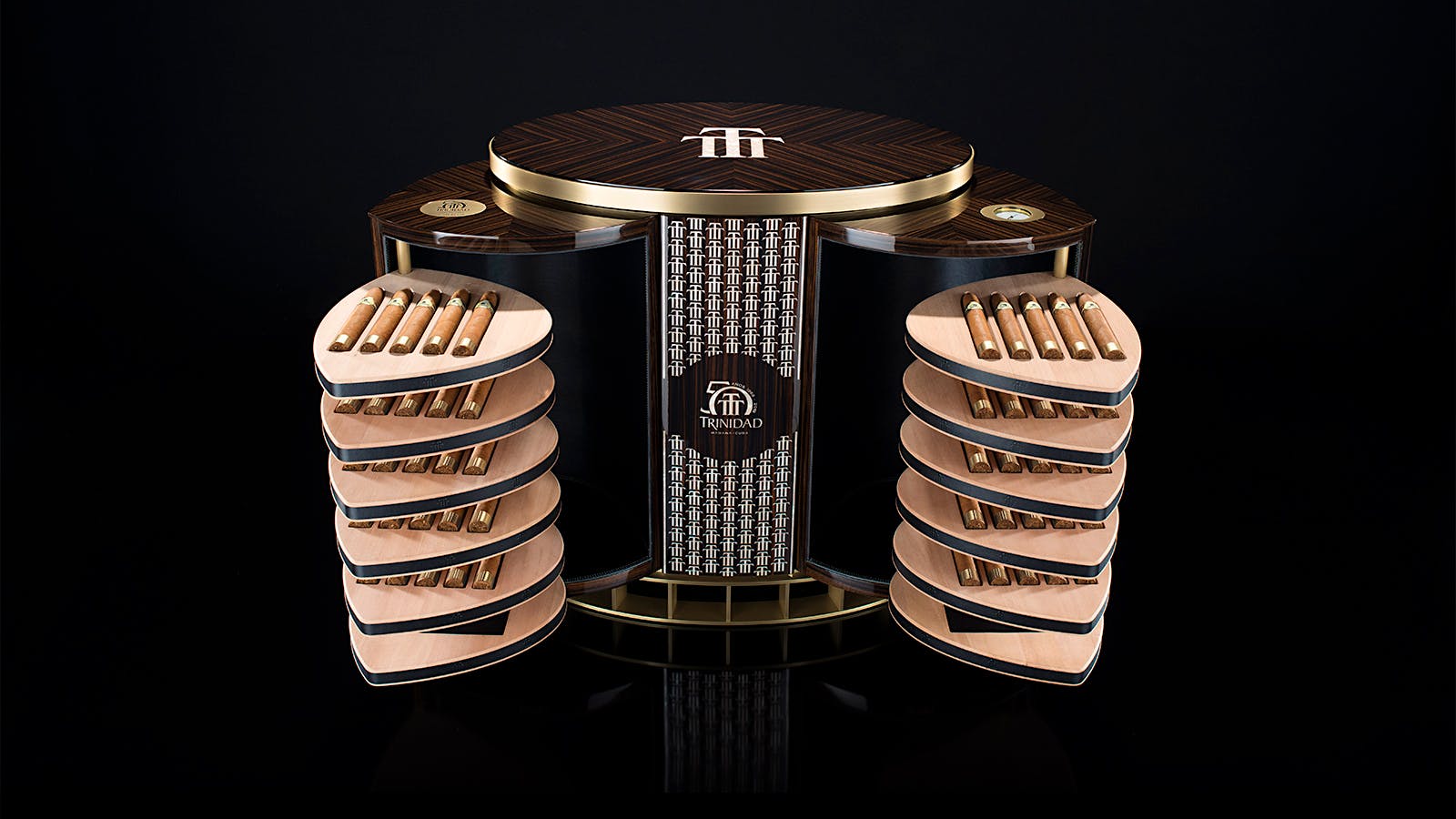 The 50 Aniversario will be limited, available only in humidors, with each one housing 50 cigars.
Back in the late-1990s, with Diplomatic Trinidads breaking records at auction, Cuba realized that there was a strong public interest in a Trinidad cigar. They were ready to deliver. In February 1998, Trinidads went on sale in Cuba, then in Mexico and Canada, with new markets added later. There was only one size, called Fundadores, but while the cigars were long and skinny, with pigtail caps, they weren’t exact copies of the Diplomatic Trinidad. Fundadores measure 7 1/2 by 40, slightly fatter than the previous versions, which had ring gauges of 38. Production of the Diplomatic Trinidads ceased, according to Cuban officials.

In its debut blind tasting in the April 1998 Cigar Insider, Fundadores scored 90 points. While never able to gain the buzz of its thinner (and much rarer) predecessor, Fundadores became sought-after smokes by cigar lovers, particularly those who appreciate and enjoy thinner sizes.

In 2012, Cuba trimmed back the line, cutting the Robusto Extra and Robusto T from production, and rumors swirled that Cuba would soon stop making the entire brand. That speculation proved unfounded, and in 2014 Cuba reversed track and introduced a new size, the Vigía (4 3/8 by 54), aimed at “filling the gap left by these two vitolas.” The size was named took the No. 14 spot on Cigar Aficionado’s Top 25 Cigars of 2015 list.

But there was also another Trinidad, one that moved away from the origins of the brand: The Trinidad 50 Aniversario. The size, called a Gloriosos in Cuban cigar factories, measures 6 1/8 by 59, and is the first figurado in the brand’s history. It’s also the first Trinidad to be made without its trademark pigtail cap, and the first time a Trinidad is presented with a footband.

The 50 Aniversario will be limited, available only in humidors. Each humidor contains 50 cigars, and 100 will be sold. Habanos auctioned the first at the Habanos Festival in February, and it went for 300,000 euros ($340,000).

No price has been sent for the other 99 Trinidad 50 Aniversario humidors that will be sold. It won’t be $340,000, but one can safely assume it won’t be cheap either.