For all its relative simplicity—spirit, sugar and herb—the Mint Julep is a drink filled with contention. Arguments erupt over what kind of sugar to use, the correct form of ice, the proper vessel, even what part of the plant to pick the mint from. But we all agree on one thing: this mixological icon of the South is made with Bourbon. Right?

Not so fast. Yes, the Mint Julep is the official drink of the Kentucky Derby, the home state for Bourbon. Furthermore, each year an official Bourbon provider (this year Old Forester) serves up an estimated 120,000 juleps over the two-day event, using 60,000 pounds of crushed ice and 4,000 pounds of mint leaves.

And while the horse race that is usually run on the first weekend of May has been postponed this year until September, a social-distancing celebration (on television and the Internet) is planned for Saturday. It will include a virtual paean to the Mint Julep with Woodford Reserve master distiller Chris Morris demonstrating how to make one at 2 p.m. EDT at woodfordreserve.com, followed by a toast at 3 p.m. You can be certain I’ll be sipping a Julep made from Bourbon on Saturday. I hope you will, too.

But you may be surprised to know that the drink was not created with Bourbon at all, but—gasp—brandy. Disregarding centuries of etymology stretching back to a Persian word for rosewater, the julep was born in earnest in the South during the late 18th or early 19th century in an era when cotton was king, but Bourbon had yet to be crowned.

Brandy was the posh sip of choice among the plantation elite and therefore became the base of the drink. Not only that, but all manner of items that we would consider foreign to the cocktail were also a part of this drink which we know today as simply whiskey sweetened with sugar, flavored with mint and slowly diluted by crushed ice. Among the invasive ingredients in Mint Juleps of yore were pineapple, berry, oranges, peach brandy and even a floater of Jamaican rum. 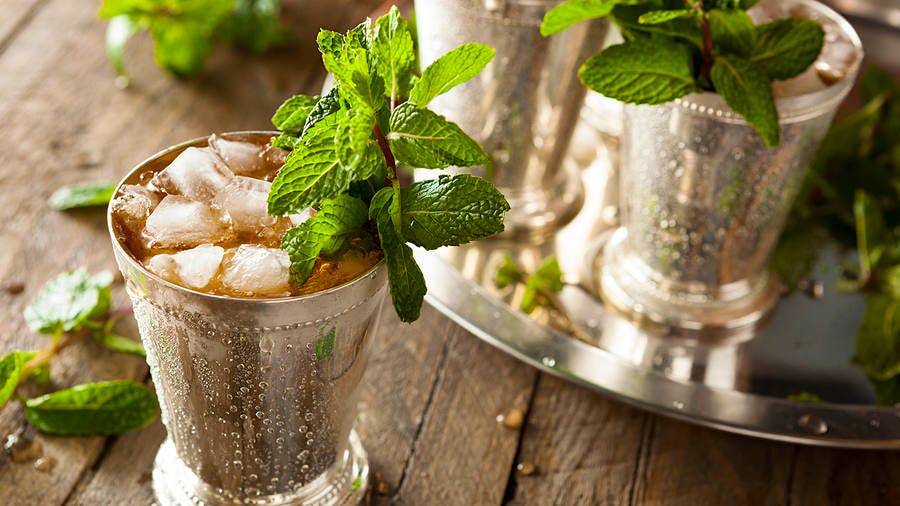 The True and Sacred Julep wouldn’t happen overnight. While Henry Clay, the senator and sometime presidential candidate from Kentucky, is credited with introducing the julep to Washington D.C.’s Willard Hotel, that wasn’t until 1847. By that time a British sailor/adventurer/writer had already published a julep recipe of the brandy genre. About 15 years later, when bartenders began studiously compiling drink recipes, pioneers like Jerry Thomas and Harry Johnson were still referring to Mint Juleps as complex brandy riots bombarded with fruit.

Mint Julep recipes continued in this vein throughout the rest of the century. Then, in 1904, a book called One Hundred and One Beverages printed a lone julep recipe, this one with a rye base. Whiskey was beginning to usurp brandy’s place. That same year, John Applegreen’s Barkeeper’s Guide gave first reference to a Whiskey Mint Julep (whiskey type unspecified), yet brandy persisted in most recipes.

With Prohibition, cocktail books dried up along with free-flowing booze. One of the first to be published after Repeal was Irvin S. Cobb’s Own Recipe Book of 1934. Cobb was an author and newspaper columnist with a flexible elbow and a bent for humor. His take on the julep was that while it was a subject of great debate and pervasive disagreement, only two juleps were worthy: the Original Kentucky Mint Julep and the Georgia Mint Julep. (The main difference between the two was the exhortation in the latter to sing “Dixie” as the last step in building the drink.) Both called for either Four Roses Bourbon or Paul Jones Whiskey, a pre-Prohibition Kentucky blend available for medicinal purposes throughout Prohibition. Cobb was adamant in his love of Bourbon in the drink, and once said of fellow journalist H.L. Mencken, “Any man who would put rye in his Mint Julep would put scorpions in a baby's bed.”

By 1938, the Mint Julep with Bourbon had become the official drink of the Kentucky Derby and today you would be hard-pressed to find a recipe for a non-Bourbon julep without referring to an antique text. When David A. Embury wrote The Fine Art of Mixing Drinks (1948), a book that painstakingly catalogued some eight different ways to make a Gin Martini, he couldn’t be bothered to describe any julep base but one: “Use only the best-quality bonded Bourbon—the older the better. If you want to make a Rye Julep, or a Rum Julep, or a Gin Julep, or a Brandy Julep, well and good, but you will be on your own.”

And so join us as we toast Saturday’s displaced Derby Day in the way of Old Granddad (or Old Fitzgerald, Old Crow or Old Forester): with Bourbon. If you want a brandy one you’re on your own.

Place simple syrup in the bottom of a silver julep cup (a highball or mixing glass will also do). Add five mint leaves, and gently press with a muddler. Pack with crushed or shaved ice. Fill glass to the brim with Bourbon. Stir gently.

Garnish with two sprigs of mint (one isn’t enough; three is just bragging). Serve with two straws, cut short enough to extend about 2 inches above the cup, allowing you to enjoy the aroma as well as the flavor of the mint when drinking. Or just take a big ol’ swig.