Most cigars come in a fairly small range of shapes. Many are round, some have squared edges (box or trunk-pressed cigars) and others have pointed heads, pointed feet, or a combination of the two.

Then there’s the cigar that was pressed like a triangle.

That would be the Alec Bradley Trilogy, a cigar made unlike just about any other. I was given one of these a few months ago by a friend, and I finally got around to smoking it the other day. To envision the cigar, imagine looking at it from the perspective of the foot. Instead of seeing a circle (most cigars), a square or a rectangle (box-pressed cigars), you’re looking at a triangle.

This cigar came out in 2002, and it was the brainchild of Alec Bradley owner Alan Rubin. He was inspired, he says, by the words of a friend, who told him the last thing anyone needed at the time was another round cigar.

No cigar crafted by hand is easy to make, but shaped cigars are particularly difficult, and doing something completely different like a triangle press adds all manner of complication. Rubin headed out to do some shopping, and some crafting. “I went to Home Depot,” he told me over the phone recently, “and they were demoing a DeWalt saw. I said, ‘does that thing cut angles?’” 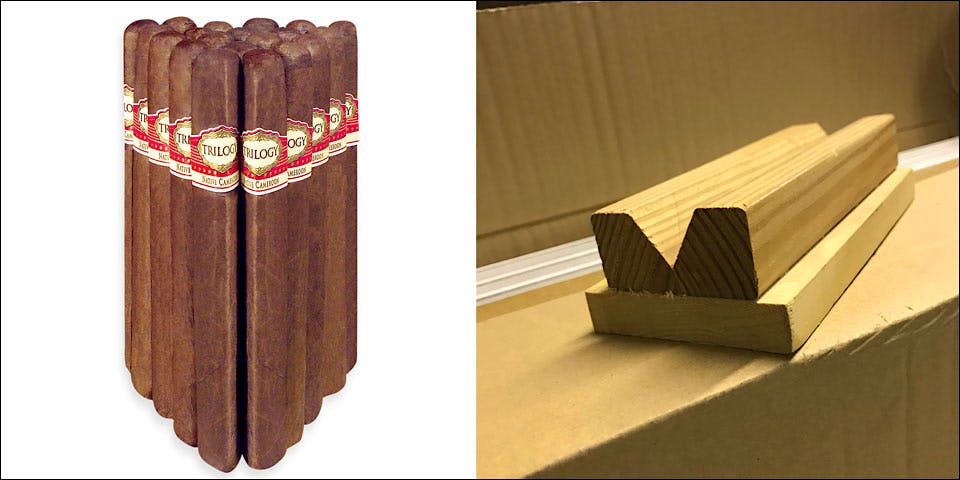 Cut angles it did, indeed, so Rubin stepped up to the machine, sliced a few chunks of wood, then assembled a wooden mold with a deep V that would hold a cigar. He took it back to his office and showed Ralph Montero, his right-hand man, and told him his plan. Montero, Rubin says, promptly proclaimed him an idiot, but Rubin was undeterred and began pressing the cigars one at a time. The result was a triangular smoke that looked quite unlike anything else on the market.

Rubin’s venture into the world of Norm Abrams and “This Old House” is hardly the only cigarmaker foray into creative cigarmaking. One of the more intriguing figurado shapes in the cigar world is the La Flor Dominicana Chisel, a cigar with a head that looks like the hand tool for which it is named. That wedge-shaped head was inspired by La Flor’s Litto Gomez chewing on the head of a traditional figurado on a long drive. By the time he arrived at his destination, he had chewed the pointed head into something resembling a chisel, and he instructed his rollers to duplicate the shape. Today, it’s one of his most popular cigars.

Then there are the oddball sizes crafted in the Fuente factory at the direction of cigar maestro Carlos Fuente Jr. His team makes cigars shaped like baseball bats and footballs, smokes with puffy heads that look like the plumes found atop rare birds—you name it. They are pieces of art, cigars he normally reserves for charity auctions.

The next time you smoke a cigar, think of all the time it took to put it together. And when you find a rarity, take a moment before you clip that head. Odds are someone worked very hard on that particular shape.