As Frank Rainieri went about realizing his dream by developing what would be called Punta Cana on the northeastern tip of the Dominican Republic, he would sometimes find himself on a low-lying cliff with a small cove beneath him awash with the turquoise waters of the Caribbean.

It was here he came to dream more than 50 years ago, when he was putting together the plans that swirled in his mind about building a luxury resort with all the amenities that went with it.

That little spot is now part of the Corales Golf Club, one of the finest golf destinations in the world. And while Punta Cana may not yet be as famous as its neighbor Casa de Campo, the area has its own world-class golf, and it’s all part of Frank Rainieri’s world-class dreams.

“Our golf courses, we know they appeal to people who love life, love fine things and who want the best,” says Rainieri, a cigar lover who not only owns the Puntacana Resort & Club, but also the local airport. (He’s such an ardent fan of cigars, it was his idea to have the Westin Hotel add a cigar bar, called Don Queco.) Rainieri isn’t a golfer but he can occasionally be found driving around his courses, admiring the landscape and smoking a cigar. He knows what people visiting Punta Cana want. “Many of them,” he says, “want a fine golf course and fine cigars.”

Over the years Punta Cana has added much in the way of golf. Two of its courses are extraordinary—the Corales Golf Club, designed by Tom Fazio, and the Punta Espada Golf Club, designed by Jack Nicklaus. Corales is part of Rainieri’s Puntacana Resort & Club, which also includes the original La Cana course, a fine resort layout by P.B. Dye, son of Pete Dye. The Punta Espada course is part of a separate development known as Cap Cana and all three courses can be packaged together.

“If there is bucket-list golf, certainly Corales and Punta Espada would fall in that category,” says Jay Overton, a former PGA Tour player and the resident pro at Corales. “If we aren’t one and two in the Caribbean, the combination of being able to play both within minutes of each other makes us No. 1. It would be like putting Pinehurst and Pebble Beach side by side.”

Corales and Punta Espada are what you might expect when top-flight designers like Tom Fazio and Jack Nicklaus work with spectacular sites.

At Corales, six holes play along the Caribbean—the seventh through ninth and the 16th through 18th. This is a trademark Fazio course with very wide fairways and multiple tees that give golfers of all handicaps a chance. There are a few alternate greens.

The back tees on the par-4 18th require a substantial carry over a cove whose waters can get pretty angry, a challenge that PGA Tour players face in the Corales Puntacana Resort & Club Championship, a PGA Tour event played on the course in March. Because Fazio hates cart paths the holes have a distinct separation. 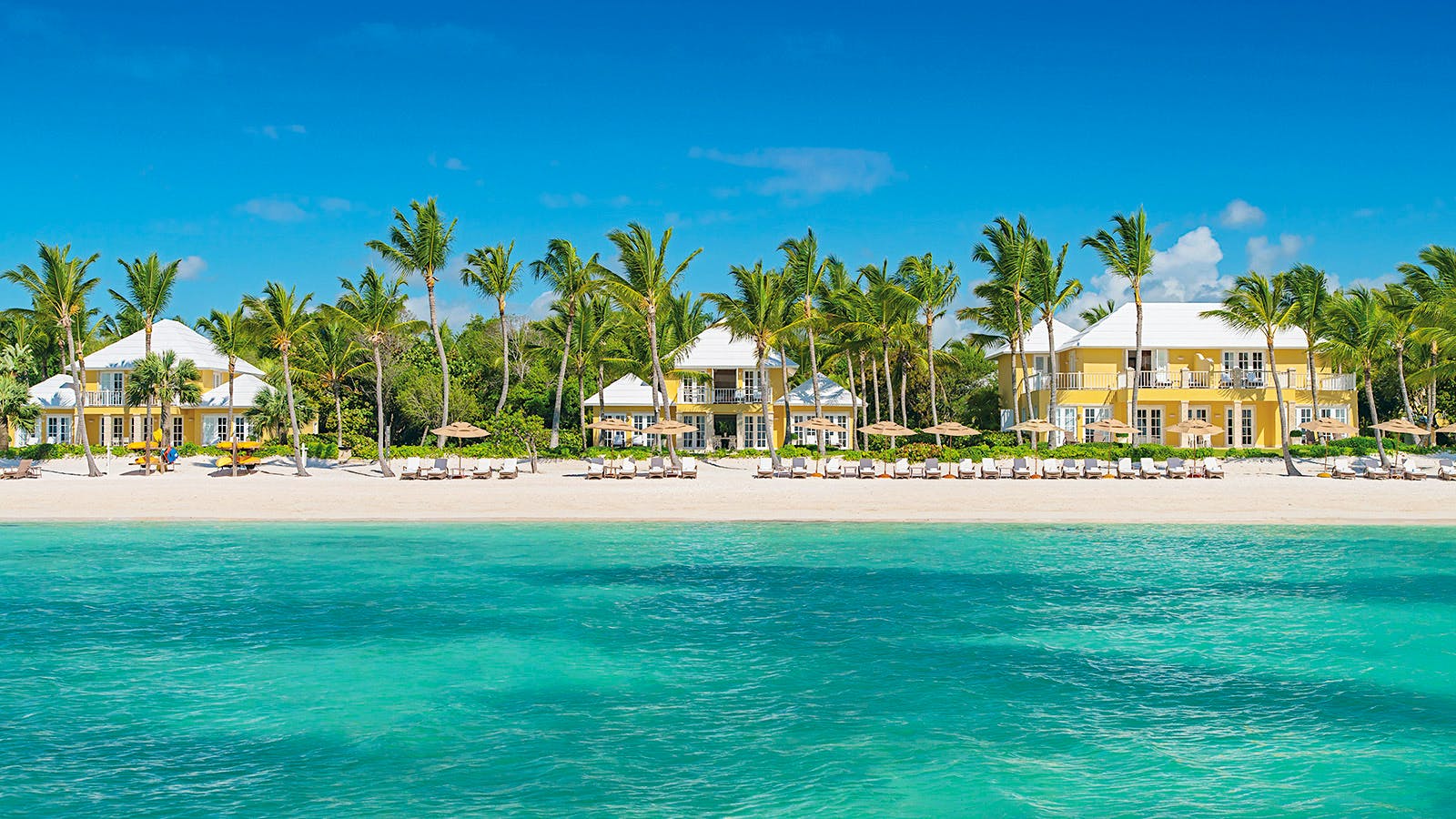 A caddie is mandatory at Corales and they are well versed in the course and the game, and excellent companions to boot. Only about 10,000 rounds a year are played between members and hotel guests. Guests of Tortuga Bay and the Westin Puntacana Hotel have automatic access and the course also has a membership roster.

Punta Espada has all the elements of drama and style associated with Nicklaus’ design work. Those who have played Nicklaus’ Punta Mita course near Puerta Vallarta, Mexico, will find Punta Espada very familiar. Nicklaus has been given substantial seaside property to work with and has taken full advantage of it. That is nowhere more apparent than on the back tees of the par-5 second hole, where the limestone has been raised by an ancient upheaval, making the views breathtaking.

The connection with the water couldn’t be closer than at the par-3 13th, which is mindful of Robert Trent Jones’ oceanfront par 3 at Mauna Kea in Hawaii. The hole requires a carry over the Caribbean to a green planted on a ledge above the water. From the back tee this is a 250-yarder, and the prevailing winds are often in your face.

The original 18 at La Cana is where P.B. takes some cues from his father Pete. Enough quirkiness is here to label it a Dye course, with an island par 3 and an island par 4. It touches briefly against the sea on the front nine, then plays alongside it over the final two holes. The par-4 seventh has a pot-bunkered approach area and a green surrounded by sand. Dye calls the pot-bunkering Hecklebirnie after a purgatory of Scottish lore.

The accompanying luxurious accommodations are well up to the standard. Rainieri’s original Puntacana Resort & Club, now a Westin marketed property, is fabulously supplemented by the decidedly upscale Tortuga Bay Club, a collection of 13 villa structures that front the Caribbean.

The hotel, a member of Leading Hotels of the World, is the country’s only AAA Five Diamond hotel. It’s embraced largely by both the Corales and the La Cana courses and has recently undergone a revitalization in the spirit of the late Dominican-born fashion designer Oscar de la Renta, who was a friend and neighbor of Rainieri, and a huge proponent of Punta Cana.

All 30 rooms have kitchenettes, plush but casual furniture, linens and bathroom amenities. Each villa has a manager/concierge as well as a golf cart and bikes.

A major amenity, and an absolute boon to the luxury traveler, is what the hotel calls its Whisking Service, which moves guests through the airport both on arrival and departure with complete ease, avoiding long lines for ticketing and security. (After all, it is Frank Rainieri’s airport.) Together with limousine service, it gets guests to their rooms in about 20 minutes. 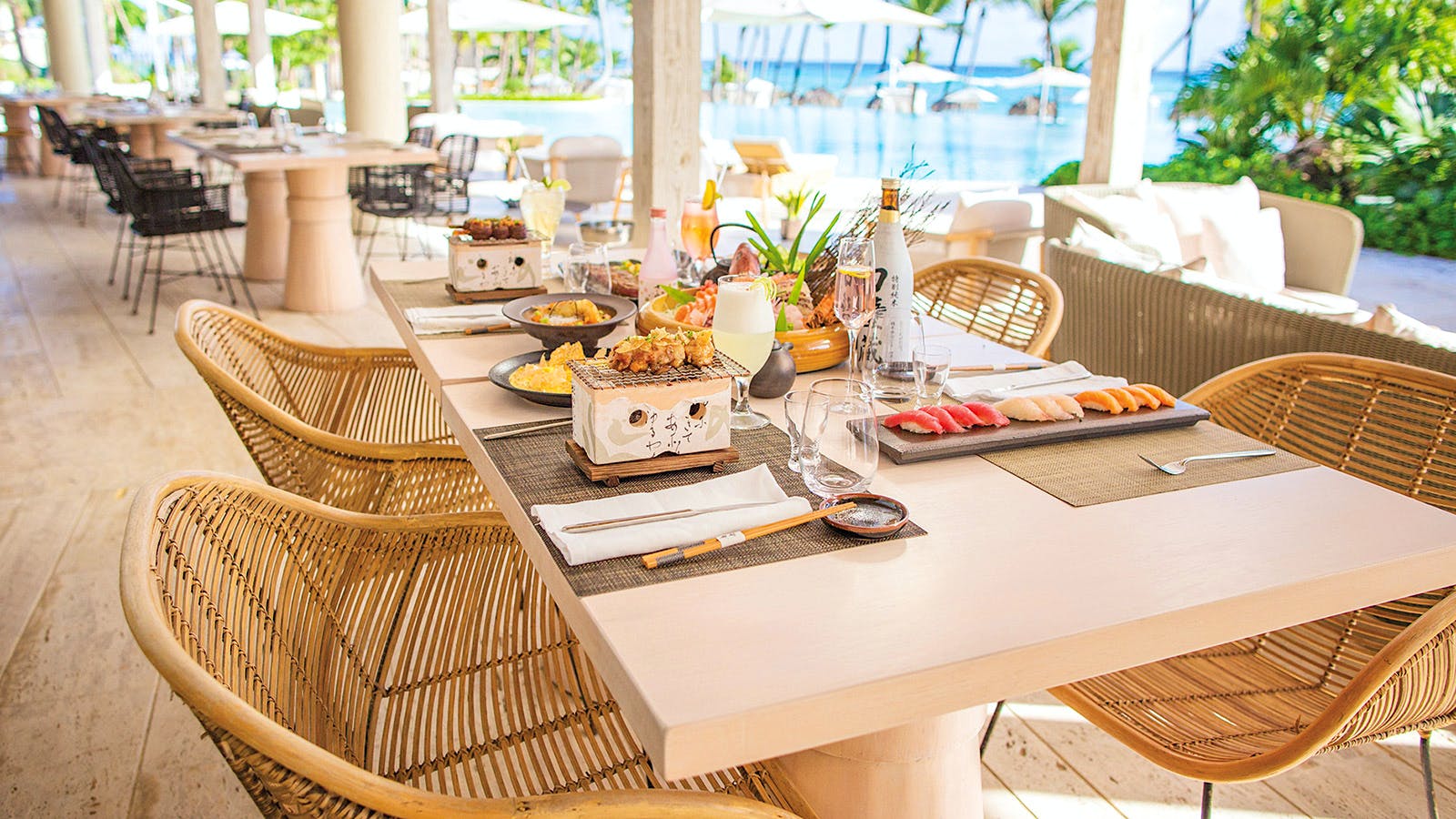 Right next door to the Punta Espada course is the luxury Eden Roc Hotel, which opened in 2013. The acquisition of a beach club in 2015 has added beachfront suites and villas right next to the golf course. The Eden Roc, technically in Cap Cana, is part of the Relais & Chateaux group.

The 26 posh beachfront suites, posh and attuned to the sea that they serve, are enveloped by oceanfront golf holes. The 34 boutique suites that are off the water each have their own pools. High ceilings, wood beams and expansive windows assure connection to the outdoors. There are up to four bedrooms in the boutique suites, two in the beachfront suites.

Golf packages at Eden Roc, Tortuga Bay and Puntacana Hotel include play on the courses at each of the resorts. The Eden Roc has one package, called Golf and Gastronomy, that combines golf with fine meals.

Less expensive alternatives to this luxury triangle include the Hard Rock Hotel, which has quite a nice golf course of its own, the Hard Rock Golf Club at Cana Bay. It’s by Nicklaus Design (which means Jack wasn’t a direct participant in its design or build), but it has a lot of the signature Nicklaus characteristics, including wide fairways. With a little less tranquility, but more action, the all-inclusive Hard Rock is a big place—1,790 rooms—and is located at the northern end of the Bávaro Beach resort strip. Keeping with the Hard Rock theme, the hotel offers a “Sound Of Your Stay” experience, which includes a Fender guitar delivered to your room. It might be just the thing you need to shake off the frustration of a few three-putts.

The Punta Blanca Golf & Beach Club includes a course by Nick Price that winds through native vegetation and rocky outcrops and along wetlands. Despite its many hazards, the fairways are wide enough that most players should have enough room to play through them. Two island par 3s (13 and 15) are probably the best holes on the course.

Rainieri dreamt of a paradise on the Dominican Republic’s north shore and so five decades later it has become just that. Whether it be hotels, restaurants, cigar bars, beach clubs or golf courses, the Rainieri family holdings share a distinct signature.