When you stroll through your favorite high-end liquor store, admiring the brown bottles of Bourbon that stretch from one end of the shelf to the other, you might find yourself searching for something a bit unusual. One element you should consider is the one that is the most basic of all: alcohol content. By seeking out a Bourbon that goes into the bottle with little in the way of additional water, you’re sampling the spirit as it tastes straight from the cask. More than a few whiskey connoisseurs will argue that such boosted alcohol concentrations are how God intended Bourbon to be enjoyed.

Bourbons often labeled with such terms as “cask strength,” “barrel proof” and “full proof” have captured discerning palates. The allure is not that they pack a punch, but that they retain so much of the whiskeys’ flavors, qualities that may be dulled at lower proofs. The swizzle-sniff-and-sip crowd is fervently seeking out elite cask-strength whiskeys meant to be savored. Despite their high-proof statements, these Bourbons can still deliver delicate qualities along with serious amounts of flavor.

Don’t confuse these highly sought-after spirits with, say, pure grain spirits, eyelash scorchers that can come in as high as 190 proof. (Proof is a measure of alcohol concentration equal to twice the alcohol percentage by volume.) For a beverage to be labeled a whiskey it must have a minimum 40 percent alcohol percentage, or 80 proof, and that number is what you’ll find on the vast majority of Bourbon bottles. At 100 proof, a whiskey can (with a number of other qualifications) be labeled “bottled in bond,” a prestigious mark in itself. But, with a few exceptions (Wild Turkey 101, for one), since the end of Prohibition the century mark had fairly been the outer limit of whiskey strength. Then the Bourbon revival of the last few decades blew by that level. Today, many enthusiasts of cask-strength Bourbon are, more and more, turning to whiskeys that may test higher than 130 proof.

The rage for high-proof whiskey was ignited in the early 1990s when Booker Noe created his namesake whiskey at proof levels far exceeding the standard 80s and 100s found elsewhere. Booker’s was and is a cask-strength Bourbon, and the proof levels varied by batch, but they were always high, and in the 120s. Noe, who was then the master distiller of Jim Beam, also distinguished his Booker’s by refraining from chill filtering the whiskey—a cosmetic process that keeps spirits from clouding. The point of both, he said, was “to keep all the goodies in the whiskey.” The result was a lip-smacking, powerful and flavorful Bourbon.

But why do brown spirits improve at high alcohol content while clear spirits do not? All alcoholic beverages start as some kind of fermented vegetable matter. If you feed mashed grains to yeast it creates beer. Start with grape juice and you get wine. Distilling the liquid—heating it and capturing the condensed alcohol that steams off at a higher alcohol percentage—creates a spirit. Depending on how you do it, the process can be more or less efficient—higher or lower proof. Vodka makers may distill as close to pure alcohol as possible (about 190 proof) because that removes the flavors of the beer or wine they started with—and their goal is to make a tasteless and odorless spirit. Bourbon makers want to retain the flavors from their carefully chosen grain recipes, or mash bills. The law limits them to 160 proof at most, but few distill at more than 140 and some go as low as 110, to preserve flavor. 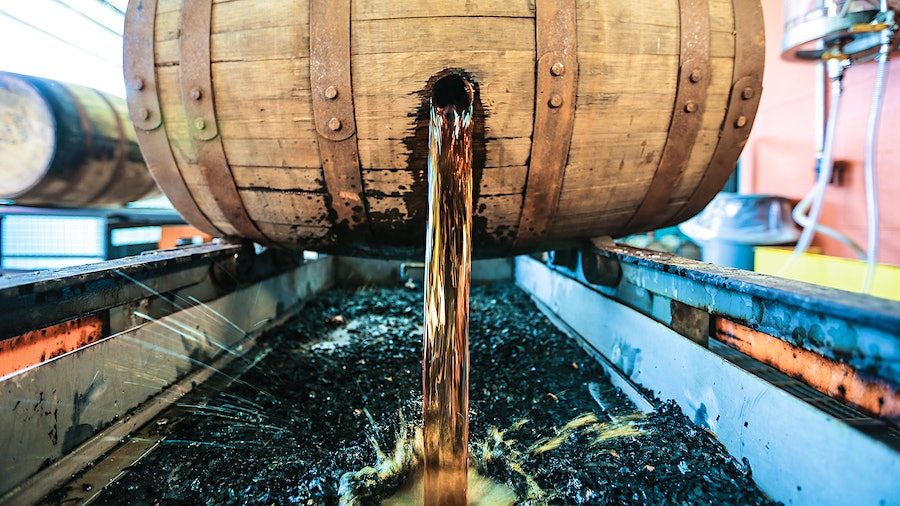 But if distilling at lower proof produces more flavor, why are high-proof spirits so prized? It’s not so much about what distillers do, but what they don’t. By regulation, distilled Bourbon goes into a new charred-oak barrel at a proof of no higher than 125, which often requires diluting it with water. There it sits for years. Because Bourbon is so often made in Kentucky where the summer swelters, the alcohol expands into the staves of the barrel, picking up flavor. The fact that the containers are new and charred on the inside hastens the process. But the heat also evaporates some of the liquid. Depending on whether it is alcohol or water that evaporates the proof can go up or down. Most Bourbon goes up. Whatever the proof, when they go to dump the barrel the whiskey is much more flavorful—and it’s far hotter than the 80-proof minimum required for bottling most spirits in America. The proof level when the whiskey is emptied is considered cask, or barrel, strength.

Most whiskey gets bottled at a much lower strength than it was made, and that’s due to distillers adding more water. Depending on your tolerance level, a bit of dilution can be merciful, and uncut whiskey can be too fiery for some. (There’s a reason why 80 proof is so popular and the 100-proof-bonded Bourbons are cherished.) But if you’ve ever let your whiskey on the rocks sit for too long and then took a sip of an overly watered-down drink you can appreciate how lowering the proof at this juncture might rob the whiskey of some flavor.

Most of a distiller’s whiskey is created exactly the same and then stored under different conditions, which greatly affect the final taste. At the critical point when it is dumped, the decision is made how much water (if any) to add. Those barrels deemed special are candidates for gentle dilution. While cask strength and barrel proof are terms meaning the whiskey in the bottle is within a sliver of the proof it was dumped at, there are also Bourbons that are bottled at similar proofs with similar effect without meeting that criterion. It simply means that far less water was added than would be for a down-market brand. A distiller may do this to maintain a consistent alcohol level from bottle to bottle. If the stated proof never varies from bottle to bottle (like Old Grand-Dad 114) it usually means that the proof was manipulated to hit that mark. Does that disparage the whiskey? Not at all. It’s just another way for a distiller to deliver full-flavored content in the bottle.

The biggest misconception about high-proof Bourbon is that just because it came off the barrel that way, it means you have to drink it that way. The beauty of the cask-strength phenomenon is that it allows the drinker to decide what strength the Bourbon should be tasted at and enjoyed. Some water is fine. Now, adding lots of water would be sort of pointless as you’re paying a premium for the privilege to bring the proof down to pedestrian levels. On the other end of the spectrum are the whiskey nerds who show up with eye droppers to add water by dribs and drabs until they consider they’ve reached nirvana. Adding water is not solely driven by an effort to tame proof nor by an overblown sense of the supremacy of one’s own palate. It helps reveal flavors.

Consider the wise ways of Booker Noe, who would add some water to the whiskey he curated himself. Many years ago, while visiting the Cigar Aficionado offices, Noe led a small tasting of four of his Bourbon brands, slowly working his way up in proof as he built to a tasting of his namesake Booker’s. It was around 10 in the morning when he poured himself a heroic amount of the 120-something-proof whiskey, and added a splash of water, bothering neither to measure or do much in the way of ceremony. He explained that the water served to break the tension in the whiskey and release its aromas and flavors. Then he raised the glass and took a big ole gulp.