Share
Lowland Scotch is known for producing softer, gentler whiskies, and the region's distilleries have large stills, such as the huge and distinctive copper stills of Glenkinchie, shown above.

When you think of the lands that produce your dram of fine Scotch, your mind’s eye might create a vision of windswept, craggy Highlands or sea-battered islands, or kilt-swathed Caledonian clansmen with tall fur hats guarding the ancient stills of this northern land. But there’s an unsung and picturesque region of the nation called the Lowland that’s quite unlike most of the Scotch-making world, and it’s home to a growing number of sublime spirits that pair beautifully with milder cigars.

Located in the southernmost expanse of the country, with England to the south and the Highland north and west, the Lowland includes such well-known cities as Edinburgh and Glasgow. It is relatively flat (although not always low) with an interesting mix of quaint, pastoral countryside interspersed with urban areas, more like England’s gentle Cotswolds than the austere Hebrides. If you’re looking for the forbidding moors of Wuthering Heights, keep driving north. But if you want a picturesque vacation spot, this is it. As well as producing laudable Scotch, the Lowland is an easy tour. Some of its distilleries can be quickly reached from the country’s two largest cities. Furthermore, without mountains and blessed with ample grass, it is home to the bulk of the great venues for the nation’s other cherished invention, golf, including St Andrews.

The history of Lowland whisky-making doesn’t abound with the kind of romantic legends that the Highland is known for. Few moonshiners hiding in glens to avoid prohibitive licensing fees. Little of the bootleggers riding at night with pistols at the ready should the law approach. The terrain wasn’t right for it, with no dells to hide out in. With the wide-open spaces of the Lowland, the move was to pay for your license and operate out in the bright light of day. Whisky men here could build their stills large, instead of using equipment made squat so it could be concealed. When they malted the barley they reached for coal heat to stop the process, instead of peat, the specialty of Islay. In the modernized Lowland very little smoke touched the grain before it was turned into whisky.

This all added to the beauty and distinction of Lowland whisky. Lowland spirit isn’t a smoke bomb like the typical Islay malt, nor the lapel-grabbing girth of a Highland. The Lowland developed its own style, a softer gentler whisky, but never at a loss for flavor. In the main, a Lowland whisky strives for flowers instead of fruit, honey rather than grit. What little smoke it has comes in small doses. In the end, the archetypal Lowland is a subtle whisky, refined and regal, but never lacking in taste. 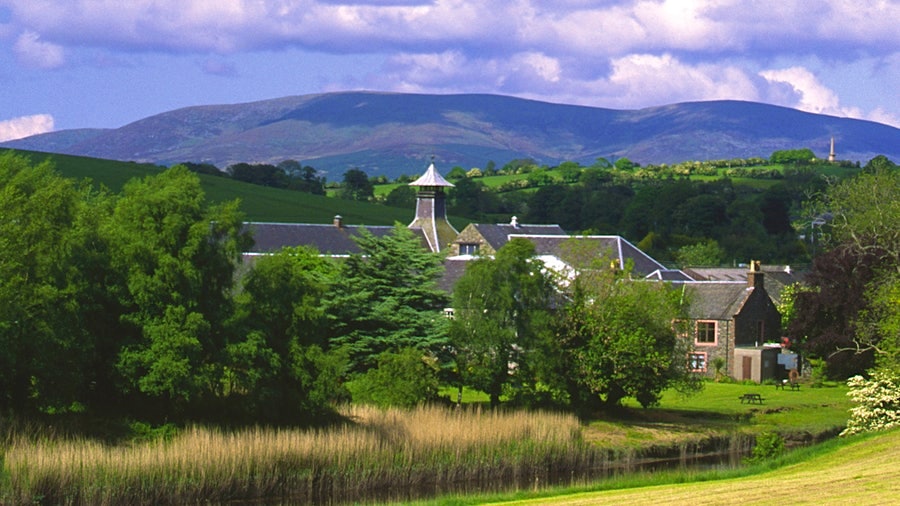 The 200-year-old Bladnoch distillery, nestled in the bucolic hills of the Lowlands.

Until recently, this least represented of Scotland’s whisky regions has been sorely underestimated. But with a flurry of new activity, the Lowland is now the fastest growing territory in the land. At the turn of the 21st century, the region struggled to keep three distilleries alive, but now 15 sites have opened here since 2005, and another seven are in development. While most have yet to market spirit or are doing so in limited circulation, these (for the most part) light and smooth drams, which speak of flowers and grasslands, show great promise for making their mark again.

“I think Lowland drinkers are showing a level of discernment because they’re drinking one of the lesser-known, but classy regions of Scotland,” says Ewan Gunn, a whisky ambassador for Diageo, which owns the Lowland distillery Glenkinchie. “It’s almost the opposite of ordering a cliché dram. It’s showing that you know your stuff a little bit.”

The term terroir—the effect the land, the atmosphere and the climate has on a product—is bandied about a lot in reference to Scotch. But it isn’t quite the same as in the wine world, from which the term was taken. Sometimes it’s something more vague: the influence of history that created a local style that was then adhered to. Certainly, at this point any distillery in Scotland could produce whatever type of whisky it wanted. There is Islay whisky with no peat. A landlocked distiller could send its casks to the shore to age in the salt air. A Lowland maker could even order up barley malt with plenty of peat smoke. (In fact, that is true of Lowland Scotch Ailsa Bay. The first malt it issued eight years after being built in 2007 was heavily peated, making it an outlier in the world of Lowland Scotch.)

In the same way, the sites of Lowland distilleries cannot be typified. The long-standing Auchentoshan and Clydeside (new in 2016) are part of Glasgow’s metropolitan area, the latter built dockside. Bladnoch is surrounded by an ancient village. Tiny Daft Mill is made in a barn converted in 2005 and is fed by grain from the surrounding area. Eden Mill (distilling since 2014) is operated by St Andrews University and makes beer as well as whisky and gin. Kingsbarns (2009) is near the famous golf course of the same name. Lindores Abbey (2017) faces the former monastery that gives it its name.

The Lowland rebirth pales, however, compared to its past. Two hundred years ago, there were some 300 distilleries operating in that great swath of land. They made the same light-style whisky that the region is still known for. Partially it was because of their proximity to the English market, just across the border. In the age of some rough hooch from up north, smooth is what the sophisticated market craved.

Another development shaped the Lowland style in the 19th century. Because of the Irish potato famine, immigrants poured into Glasgow. With them they brought their own traditions, including triple distillation, as opposed to the local two-course standard. Ironically, the practice, which creates even smoother spirits, contributed to the culling of Lowland distilleries. Triple distillation costs more and many makers couldn’t compete at the same time that the market was turning to fuller-bodied malts. 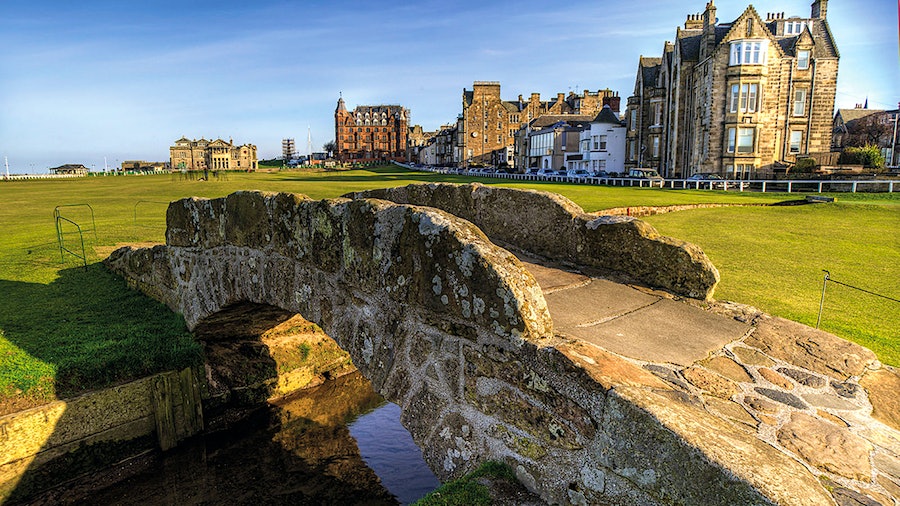 The Lowlands are also known for superb golf, especially historic St Andrews, with its Swilcan Bridge.

Nevertheless, Lowland distilling, to our gratification, continues some great traditions. In the interest of high production, Glenkinchie features some of the largest stills in the country, a feature that contributes to its light style. As the beer steams in the copper pot, the lightest vapors make it up the neck and out of the building into worm-tub condensers that turn it into liquid. Many of the contaminants, called congeners, fall off, but subtler notes are retained. Auchentoshan takes another tack at the same end. It still employs triple-distillation to arrive at its smooth spirit. With some incidental exceptions, it is the only distillery in Scotland to do this. On top of the light, aromatic spirits it produces, the maker applies novel wood treatments.

Whatever the fate of the fledgling malt revival, another factor practically guarantees survival of the region’s whiskies. While it may not have many distilleries, Lowland is the undisputed leader in overall Scotch production, because its borders contain five of the country’s six grain-whisky makers. Those are the column still whiskies that operate at a continuous clip to meet the thirst for Scottish blends. The type of malt arising from the Lowland has long been an important component in the great blends of the world. For instance, Glenkinchie is vital to the production of the world-famous Johnnie Walker blend. Both are owned by Diageo, and most of Glenkinchie’s production is actually tapped for that blend. Ailsa Bay, owned by William Grant & Sons, creates several styles of whisky aimed at bolstering that company’s blends. Single malts are made in a pot still using barley, and can only operate one batch at a time. Grain whisky is mainly used to mix with single malts and make blended Scotch. While single malts are Scotland’s exalted whiskies, blend consumption accounts for 90 percent of the country’s whisky. Given the pervasiveness of blended Scotch you may already be a Lowland fan without even knowing it.

With its generally gentle nature and subtle charms, Lowland Scotch is usually a pretty good guess when you’re seeking a partner for that mild cigar you love, the one that gets stomped all over by full-bodied whiskies. As we found in our cigar pairings (see previous pages) Lowland whisky is forever willing to cozy up to even the shyest of smokes, often rooting out personality that was too subtle to be sensed without it.

For a list of cigar pairings to go along with select Scotches from the Lowlands, see our November/ December 2021 print edition.