The second-ever Big Smoke Meets WhiskyFest—coming to Hollywood, Florida on May 28—is coming up fast, and after last year, anticipation is high. There will be plenty of drinks to sample, but it wouldn’t be Cigar Aficionado without cigars and we decided to give our readers a sneak peek at some of the many smokes that attendees can expect to receive at this year’s event, along with some of the personalities you will get to meet.

Cigar smoking will be allowed not only on the show floor inside the Seminole Hard Rock Hotel, but in the outdoor area as well.

Note that this is a partial list, and more companies (with more cigars) are expected to be added later.

Alec Bradley:
Alan, Alec and Bradley Rubin, the trio behind Alec Bradley cigars, will be at the show passing out Alec & Bradley Kintsugi Rubustos. They will also be on stage earlier that morning, taking part in a seminar on working together as a family. Seminar guests will also receive the Alec & Bradley Kintsugi Corona Gorda, Cigar Aficionado’s No. 25 Cigar of 2021.

Altadis U.S.A.:
Altadis is a massive presence in the cigar market and they have several cigars ready for the Big Smoke, including the Romeo y Julieta Reserva Real Toro, Montecristo White Rothchilde, Aging Room Bin No. 2 C Major and the Henry Clay War Hawk Toro. For the morning seminars, Rafael Nodal, head of product capability for Tabacalera USA, will not only be discussing The World of Montecristo, but will also be handing out the No. 2 Cigar of 2021, the Montecristo 1935 Anniversary Nicaragua No. 2.

Arturo Fuente:
This will be a big event for Fuente as brand owner Carlos “Carlito” Fuente Jr. will be there with his daughter Liana and U.S. director of sales Tommy Curtis. A special, events-only Fuente cigar will be handed out to attendees, though the company has not disclosed any information about it such as the name or blend of this cigar—only that it measures 6 3/4 inches by 50 ring gauge.

Fuente Jr. will also be on stage during the morning seminars, on a panel to discuss Nicaragua and the new factory he is setting up there. 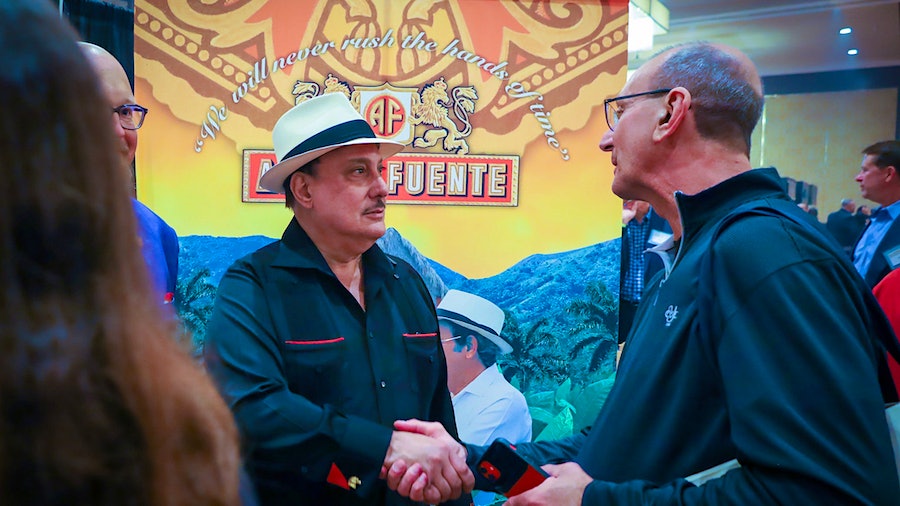 E.P. Carrillo:
Industry veteran and maker of the 2020 Cigar of the Year Ernesto Perez-Carrillo will be manning the booth at Big Smoke Meets WhiskyFest, along with his daughter Lissette, passing out the E.P. Carrillo Encore Celestial.

J.C. Newman:
J.C. Newman, which has been in the cigar business since 1895, will be at the Big Smoke with its Diamond Crown Black Diamond cigars. Look for the booth that’s a replica of the company’s historic Ybor City, Florida, factory. Eric and Bobby Newman are expected to be in attendance.

La Aurora:
La Auora, the oldest cigarmaker from the Dominican Republic, will be at the Big Smoke, distributing cigars from its 107 line.

La Flor Dominicana:
This Dominican Republic-based company will be handing out cigars from its La Flor Dominicana Ligero line. In attendance will be Tony Gomez, Litto Gomez Jr., and vice president of sales Jonathan Carney.

My Father Cigars:
José Ortega, vice president of sales and Yusef Joudeh, also part of the sales team, will be handing out Fonseca by My Father Robustos. The cigar has been rated 90 points in both Cigar Aficionado and Cigar Insider.

Oliva Cigars:
Oliva Cigars will be at the show, but the cigar they are passing out has yet to be determined.

Padrón:
The Padrón booth is typically manned by members of this Miami family. Jorge Padrón will be on stage during the morning seminar, closing out the show with a tasting of his Cigar of the Year, the Padrón 1964 Anniversary Series Torpedo, but it’s uncertain what cigar will be passed out at the evening Big Smoke.

Plasencia:
The Plasencia booth will be stocked with Plasencia Reserva Original Robustos.

Rocky Patel:
Rocky Patel, his brother Nish, cousin Nimish Desai and Hamlet Paredes will be on hand to greet those attending. The company will be passing out two cigars from its library of brands. 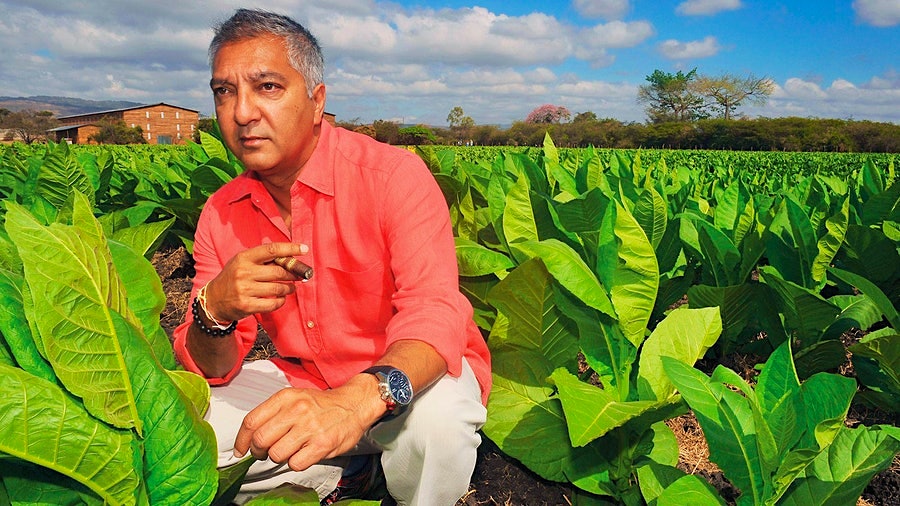 Rocky Patel, seen here in the tobacco fields of Central America, will be one of the many stars at Big Smoke Meets WhiskyFest.  (Photo/Richard Leonardi)

Serino:
In attendance will be founder and brand owner Tony Serino and his brother Paul, who also serves as the company’s operations officer. The company will be handing out the Serino Royale Connecticut Robusto and Serino Royale Maduro XX Robusto Extra.

Tatuaje:
Pete Johnson, the owner of Tatuaje, will be at the Big Smoke (he’s speaking on stage at the morning seminars). The cigar he’s chosen to hand out for the evening show is the Tatuaje Nuevitas Jibaro No. 1, the No. 9 Cigar of 2019.

Warped:
Warped brand owner Kyle Gellis will be at the Big Smoke, handing out La Hacienda Gran Robustos, a cigar that earned 90 points in the August 2016 issue of Cigar Aficionado.

To get more information about Big Smoke Meets WhiskyFest, or to purchase tickets, click here.