In a cigar world turned upside down by a pandemic, some things remain constant. Consumers continue to buy fine cigars, and in top-tier cigar shops, Arturo Fuente and Padrón reign supreme. The two brands, each of them made by family-owned companies with a long reputation for making exceptional cigars, took the top spots once again on both our hottest brands and best-selling brands list.

The editors of Cigar Insider—the twice monthly newsletter from Cigar Aficionado—polled 87 cigar shop owners, representing 141 retail stores across the United States. The retailers were allowed to name three brands as their hottest, the cigar brands requested most often by consumers. (Hot brands aren’t always in stock, so this represents consumer demand, not necessarily sales.)

Padrón 1964 Anniversary Series took the No. 1 spot, named by 29.9 percent of retailers as one of their hottest brands. The top-scoring smoke has been in great demand for much of its long history. It was launched in 1994 as a more upscale Padrón, and its box-pressed shape sparked a market trend that continues to this day. The Nicaraguan cigars are perennial high scorers in Cigar Aficionado and Cigar Insider blind taste tastings. 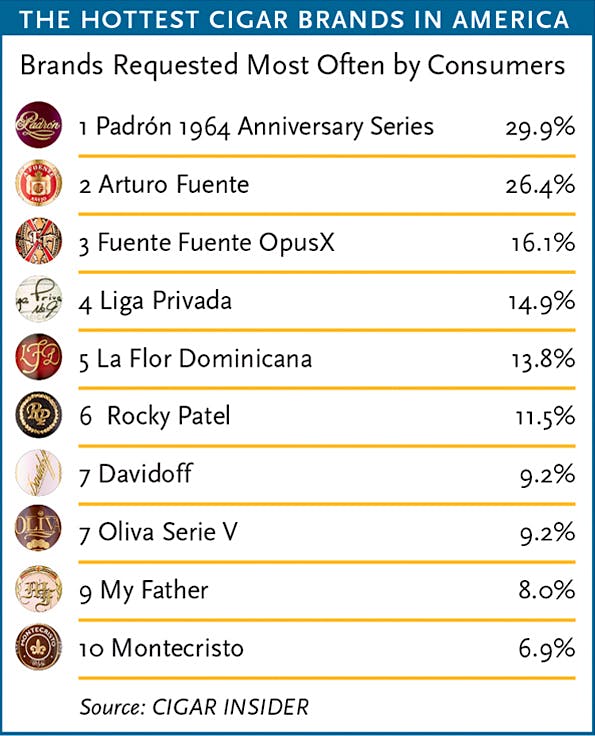 Arturo Fuente ranked second (26.4%), with many respondents naming the very upscale Arturo Fuente Don Carlos Eye of the Shark. That particular cigar has long been in high demand and short supply, a situation that only was exacerbated when it was named Cigar of the Year by Cigar Aficionado in 2017 with a score of 97 points.

In third place was another Fuente, the Fuente Fuente OpusX, the company’s top-of-the-line cigar. This is a brand that almost single-handedly defined rarity upon its launch during the cigar boom. The cigars (made with Cuban-seed, Dominican wrappers) were all but impossible to find upon their release in the mid-1990s, limited in many shops to only two singles per customer. While they are far easier to find in today’s market, they remain a hot brand nearly 25 years after their release.

Liga Privada, the bold, spicy and often allocated cigar rolled by Drew Estate in Nicaragua, ranked fourth, taking the same spot as it did in 2019. These strong smokes have a devoted following, and are made with ultra-black Connecticut broadleaf wrappers.

La Flor Dominicana jumped up to No. 5, named by 13.8 percent of retailers. (Last year, it ranked No. 7). Several respondents mentioned the La Flor Dominicana Andalusian Bull, a cigar that was Cigar Aficionado’s Cigar of the Year in 2016.

Rocky Patel—a brand with a vast array of sizes and styles—ranked sixth, named by 11.5 percent of retailers. Davidoff and Oliva Serie V tied for seventh place. My Father ranked ninth, and the Montecristo brand ranked tenth. 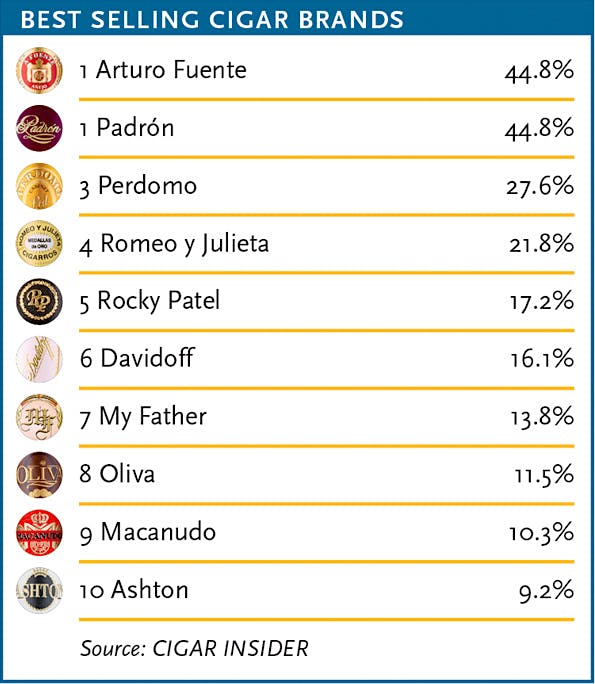 In our best-selling brands list, we had a tie at the No. 1 spot between Arturo Fuente and Padrón, which were named by 44.8 percent of retailers. Perdomo took third place, and the Nicaraguan brand showed an impressive gain from the No. 6 spot in 2019. Romeo y Julieta, the top-selling cigar brand from Tabacalera USA, ranked fourth, followed by Rocky Patel in fifth.

The top five best-selling brands come from all around the cigarmaking world: Padrón and Perdomo are Nicaraguan; Fuente and (most) Romeos are rolled in the Dominican Republic and Rocky Patel is made in both Honduras and Nicaragua.

Davidoff ranked sixth, My Father took the No. 7 spot, and Oliva ranked 8. Macanudo, a brand from General Cigar Co. that once dominated our top brand list, returned to the rankings this year by placing ninth. Ashton moved down from third place last year to No. 10 this year.

Cigar sales, of course, have been greatly impacted by the pandemic.

To see the how Covid-19 has impacted America’s cigar retailers, click here.