The cigar world is home to a huge lexicon of words. There are myriad descriptions used for how cigars are rolled, the tobacco that goes inside (not to mention how those leaves are harvested, fermented and aged) and even the packaging in which they finally reside. This cigar glossary was designed to expand your knowledge as a cigar aficionado. Here is a primer on some of the terms, complete with a pronunciation guide for the more challenging words. The far larger cigar glossary can be explored and studied here.

A heavy glass jar containing 25 or 50 cigars, typically secured with metal clips and a leather strap for carrying. Seldom seen today, this packaging was popular in the ’50s and ’60s. Cuba’s H. Upmann cigars originated the practice in the early 1900s. The jars were lined with Spanish cedar, sealed and called “factory fresh.”

A method of cigar bunching by which the cigarmaker lays the filler leaves atop one another, so they resemble pages in a book, then rolls them up like a scroll in a binder leaf. This method of cigarmaking is very quick, but can create problems with the cigar’s draw. More advanced and efficient ways of bunching include the accordion method, where leaves are folded in an “S” pattern, to allow for more airflow, and the entubado method, where each piece of leaf is rolled into a tube shape, creating many channels for air and smoke to flow through the cigar. 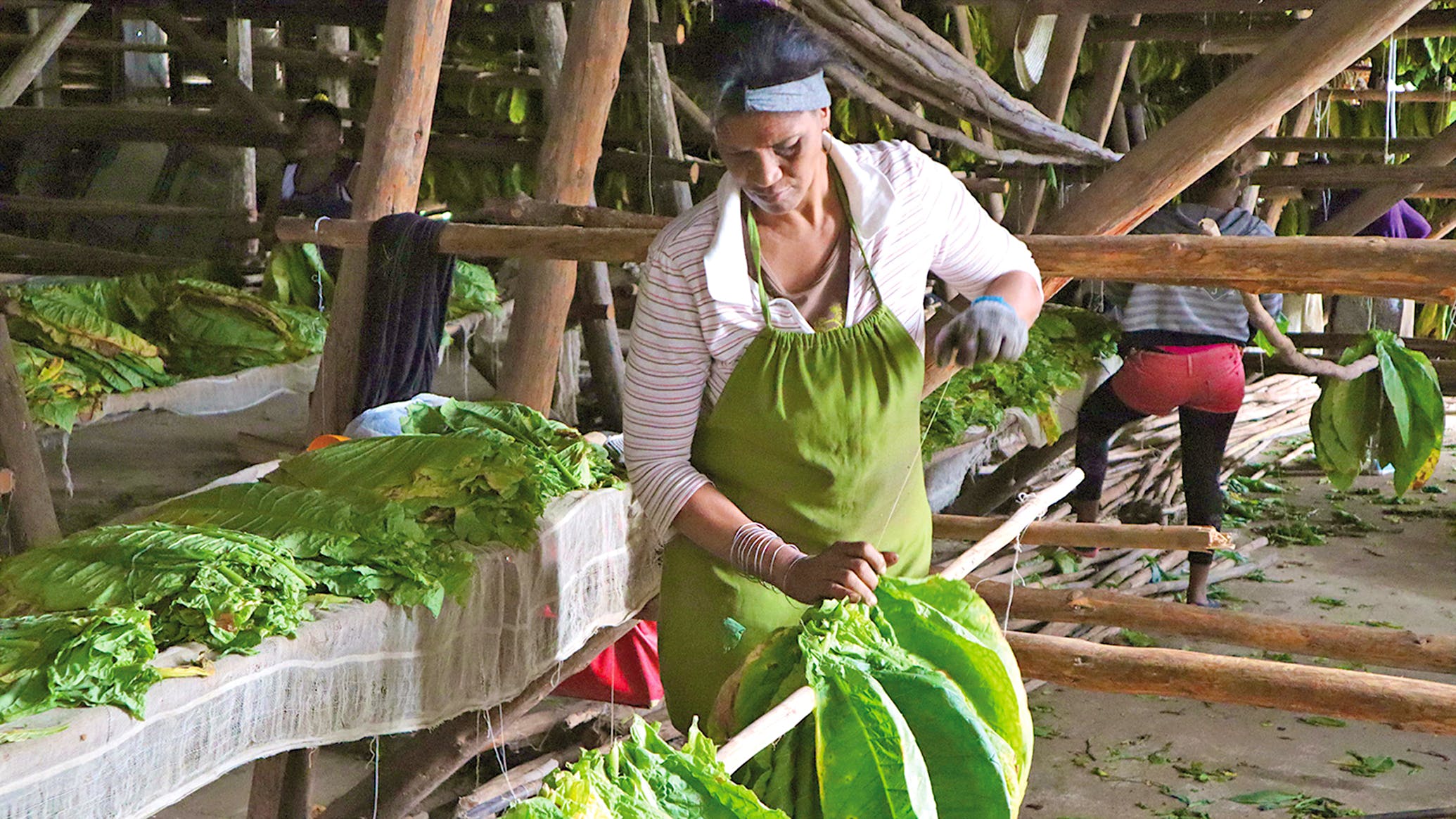 A wooden pole (also known as a lathe) used to hang freshly harvested tobacco leaves in a curing barn, or casa de tabaco. There are two varieties. Cuje cortos measure about six feet long, while cuje largos (considered superior) are about 12 feet long. The tobacco is held to the cuje or lathe using string that is sewn through each leaf. Most countries sew the leaves by hand, but in Connecticut the process is done via a special sewing machine. Some tobacco farmers skip the cuje entirely, replacing it with a wooden string, known as a sarta.

The top vent in a tobacco curing barn. It remains open to encourage air flow. (Also the place an aficionado ends up when puffing in the house without approval from a significant other.) 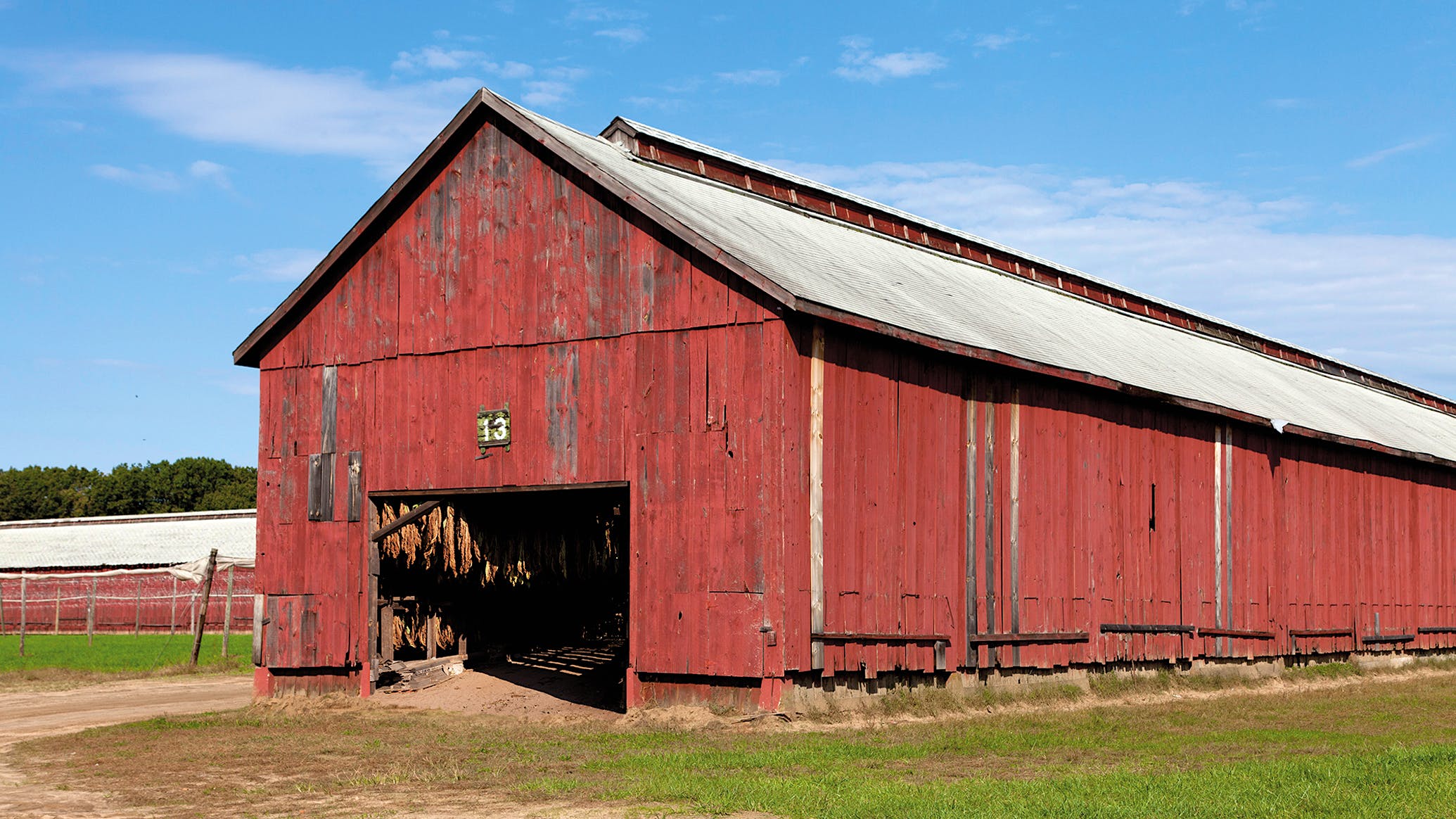 A term used to designate a cigar with a brown cigar wrapper, known today as a natural wrapper. Arcane in today’s cigar world, the term (often abbreviated as EMS) was quite popular 70 or so years ago when Cuban cigars were sold in both the United States and abroad. At the time, Americans preferred their cigars with green, candela wrappers that became known as American Market Selection, or AMS, and the cigars with natural wrappers were known as English Market Selection, or EMS. The term also has a modern-day use in the United Kingdom, where an EMS sticker on Cuban cigars refers to a box that has been vetted by importer Hunters & Frankau.

A cigar factory term for a leaf of filler tobacco that’s been stripped of most of its stem. The top third or so of the stem, nearest the tip of the leaf, is kept, the rest is stripped, leaving a leaf that somewhat resembles a frog looked at from above.

A flavorless, odorless vegetable adhesive used to secure the head of the wrapper leaf around the finished bunch. Also called gum. 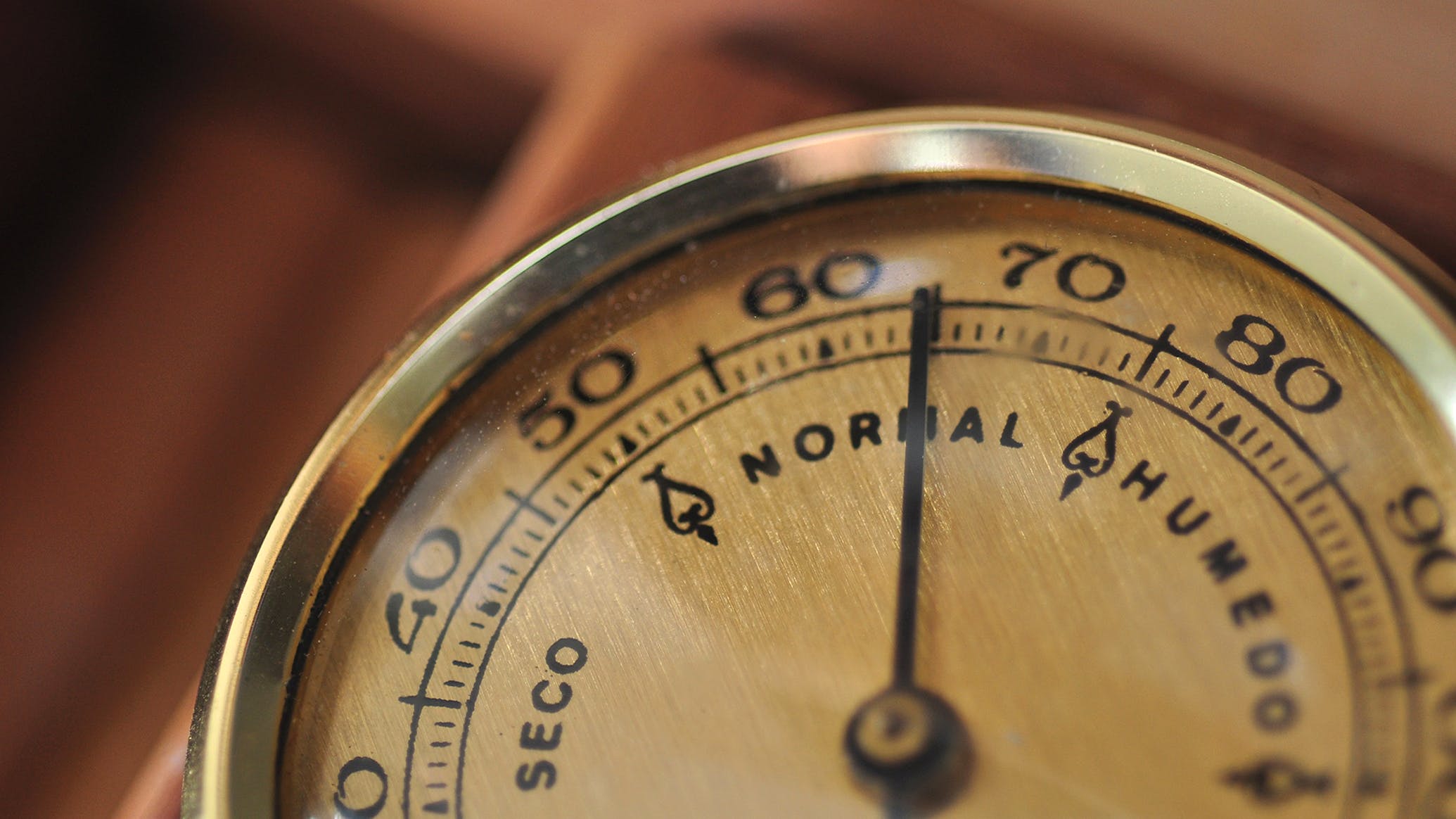 A device that indicates the humidity, or percentage of moisture in the air. Hygrometers (sometimes erroneously called hydrometers) are used by cigar companies and consumers alike. For storing your cigars in a humidor, aim for a relative humidity level of 65 to 70 percent, and know that digital hygrometers are far more accurate than analog versions.

An acronym for Island South of Miami, referring to Cuba. The term was popularized by cigar lovers on the Internet.

A valley in southern Honduras and a key growing region where fine tobacco is cultivated. Jamastran is located not far from the cigarmaking town of Danlí, and sits quite close to the border of Nicaragua.

A once dominant U.S. cigarmaking region, located on the southernmost isle of the Florida Keys. When revolution came to Cuba in 1868, many refugees fled to the island 90 miles north, where they created cigars from Cuban tobacco at a lower cost, and by 1890 the city had 130 factories making 100 million cigars per year by hand. A trio of storms (including a Category 4 hurricane) hastened its end as a cigar-producing power.

A long, slim cigar with a flag, or pigtail, head. The first lanceros were rolled at El Laguito in the 1960s with the creation of the Cohiba Lancero. True Cuban lanceros measure 7 1/2 inches long by 38 ring gauge. They are part of the panetela family of cigars, so all lanceros are panetelas, but not all panetelas are lanceros. They were named after the weapons used by medieval knights on horseback, as the cigar resembles the lances wielded during a joust.

A finishing step done on some, but not all tobacco, before it is used in a factory. Tobacco is mulled in a hot, humid room to finish tobacco leaves that may have been on the side or the top of a pilón. Away from the center of a pilón, the temperatures are not high, so tobacco may miss part of the fermentation process. The mulling room, at 95 to 100 degrees, with humidity of 90 percent, darkens and sweetens the tobacco as needed. 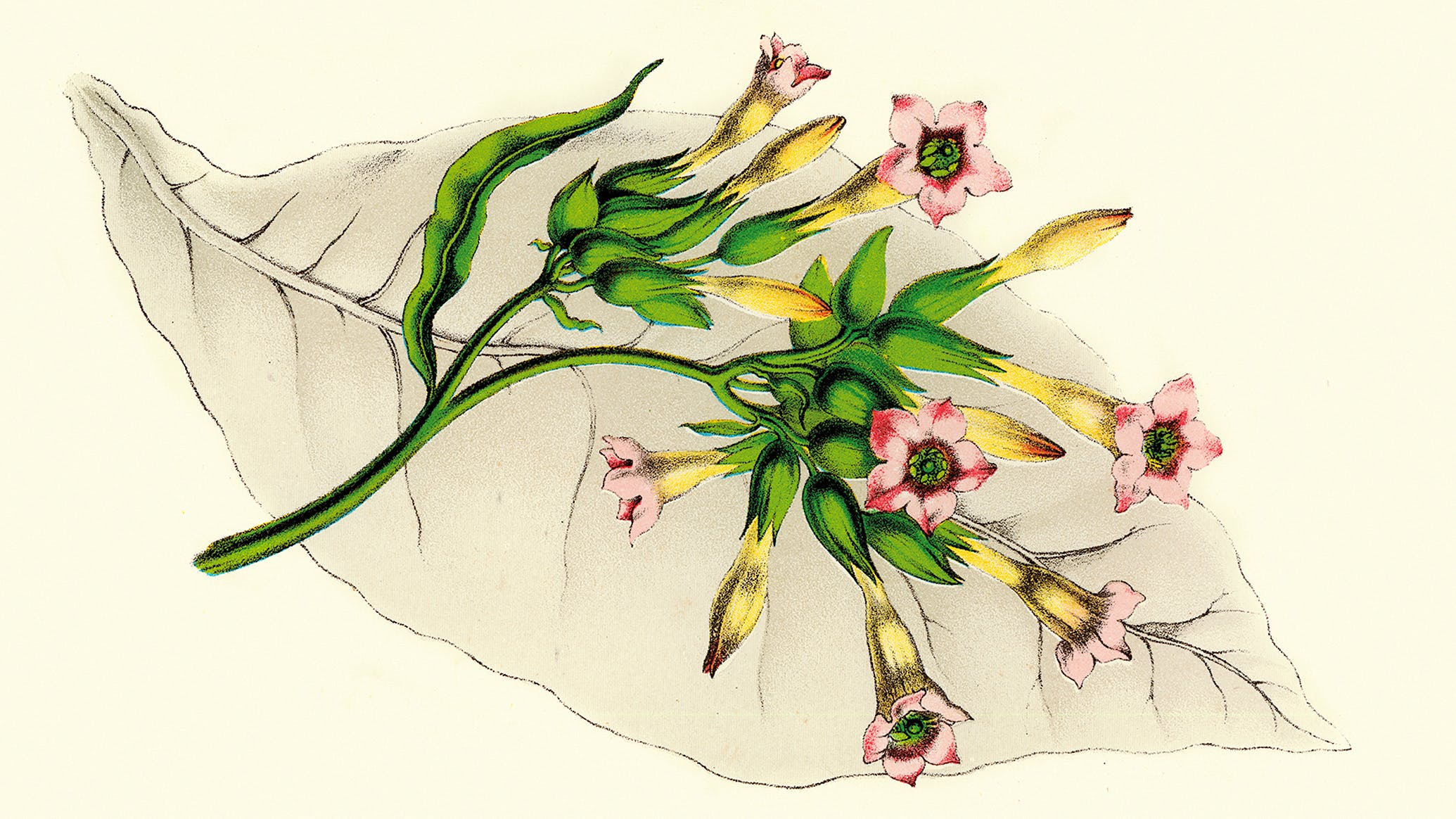 The family from which modern-day tobacco plants derive. Nicotiana Tabacum is a natural hybrid. The original tobacco plant is believed to have originated near what is modern-day Peru.

The blackest shade of wrapper, darker than maduro.

A distinctive cigar shape that is tapered at both ends, often bulging in the middle. Perfectos are members of the figurado family; all perfectos are figurados, but not all figurados are perfectos. They were extremely popular in the early 1900s, when cigars were smaller, and the La Aurora Preferidos is a perfect example of that old-fashioned size, brought back for modern-day smokers. The Fuente family is credited with bringing back the perfecto shape with its line of Hemingway cigars, which were launched in 1983.

Less sophisticated than a curing barn, quisqueyas are structures used to cure tobaccos in certain fields in the Dominican Republic. They have open sides and provide far less protection from the elements than a true curing barn, or casa de tabaco.

A Spanish term that means “rose-colored.” It is used to describe the reddish tint of some Cuban-seed wrapper. 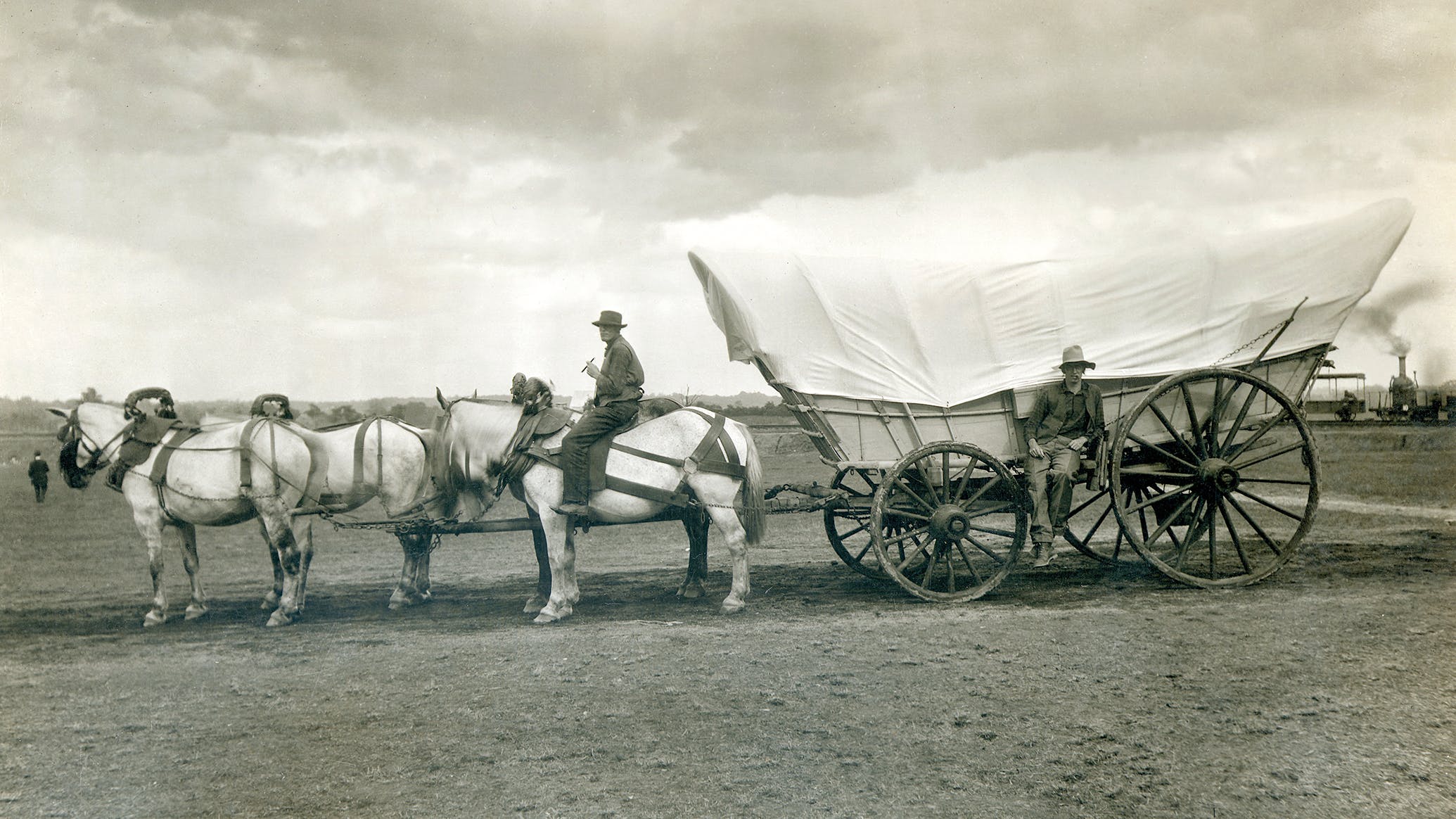 A slang term for any type of cigar, often used to describe cheap or roughly made smokes. The term comes from the long, thin cigars smoked by drivers of Conestoga wagons—heavy, horse-drawn wagons with canvas covers—in the 1700s and 1800s.

Trunk-pressed cigars have a distinctive shape, with squared-off sides and sharp angles that give them a flattish appearance, rather than the traditional rounded cigar shape. The cigars start out round, just like any other smoke, but are then placed into individual wooden slats to take shape. Pressure is applied from above, and the cigars are pressed, then later rotated. This pressing and rotation squares off the edges of a cigar to a dramatic degree, giving the cigars a very square shape. The process was popularized in the United States by Padrón 1964 Anniversary Series cigars, which debuted in 1994. The practice is commonly called box pressing, however, that is technically incorrect. Box-pressed cigars have less defined angles, and get their look from being pressed inside a dress box. 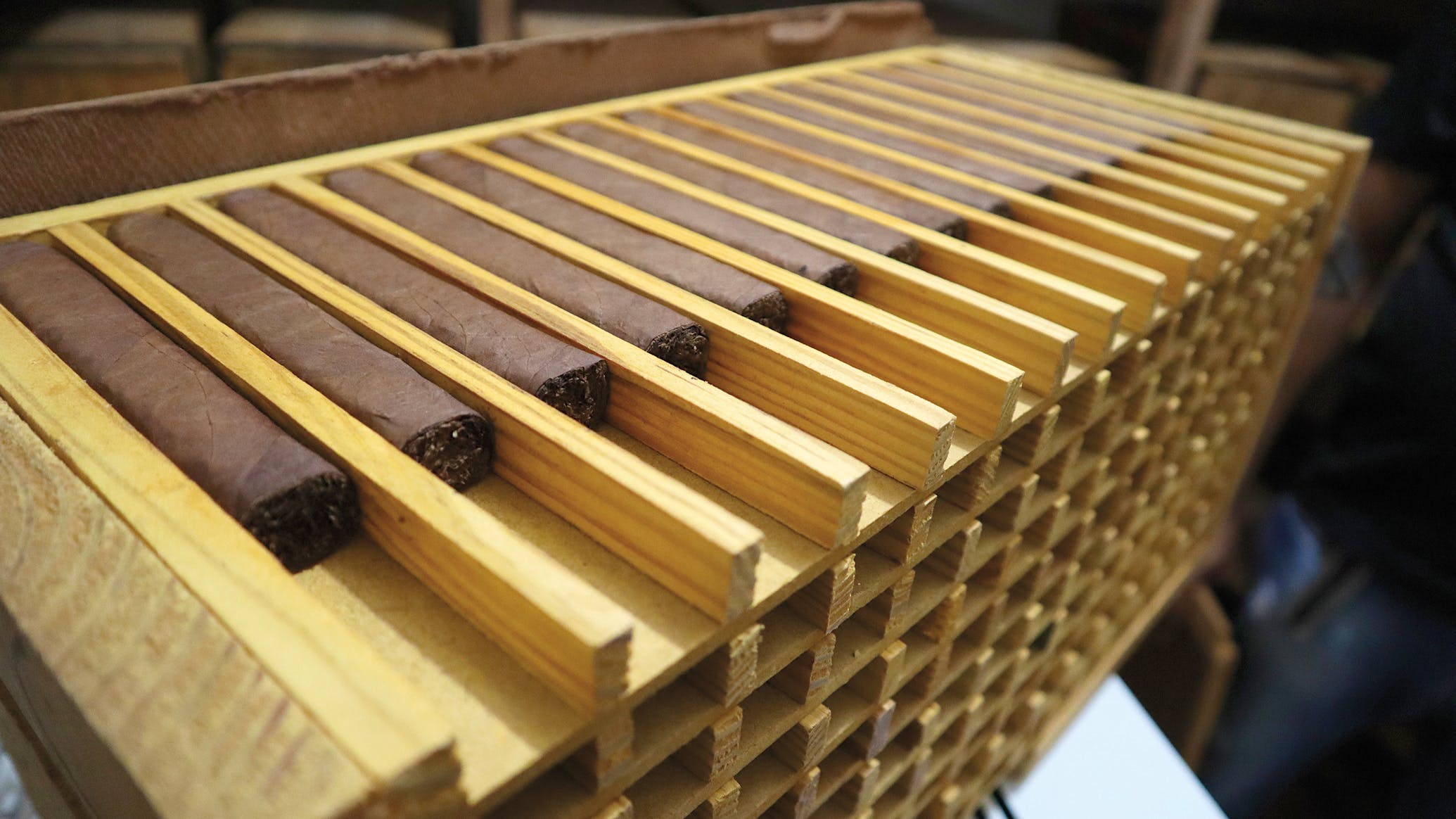 A cigar that was bunched without enough tobacco. Underfilled cigars tend to have an airy draw, will burn hot and will give you a substandard smoke. The problem of underfilling was far more common during the Cigar Boom of the 1990s, when newcomers flocked into the booming cigar business, rushing product to market. The flaw is much less common today.

A grade of filler tobacco. Volado leaf grows on the bottom portion of the plant and is less powerful than higher-priming leaves such as seco or ligero, which grow on the middle and upper portion of the stalk. Because volado gets less sun exposure than other leaves, it tends to mild, but it burns magnificently and is often used in a blend to aid in combustion.

A bundle of 100 cigars. Rollers usually use ribbon to tie the cigars they produce into wheels. These are also known as ruedas.

A 16th century Aztec statue with an early depiction of tobacco leaf. Xochipilli, among other attributes, is a god of flowers and pleasure. Carvings at its base represent sacred organisms, including tobacco and psychoactive mushrooms. The statue is now housed in Mexico City’s Museo Nacional de Antropoligía, and Mexico remains a notable producer of high-quality cigar tobacco in the modern day. 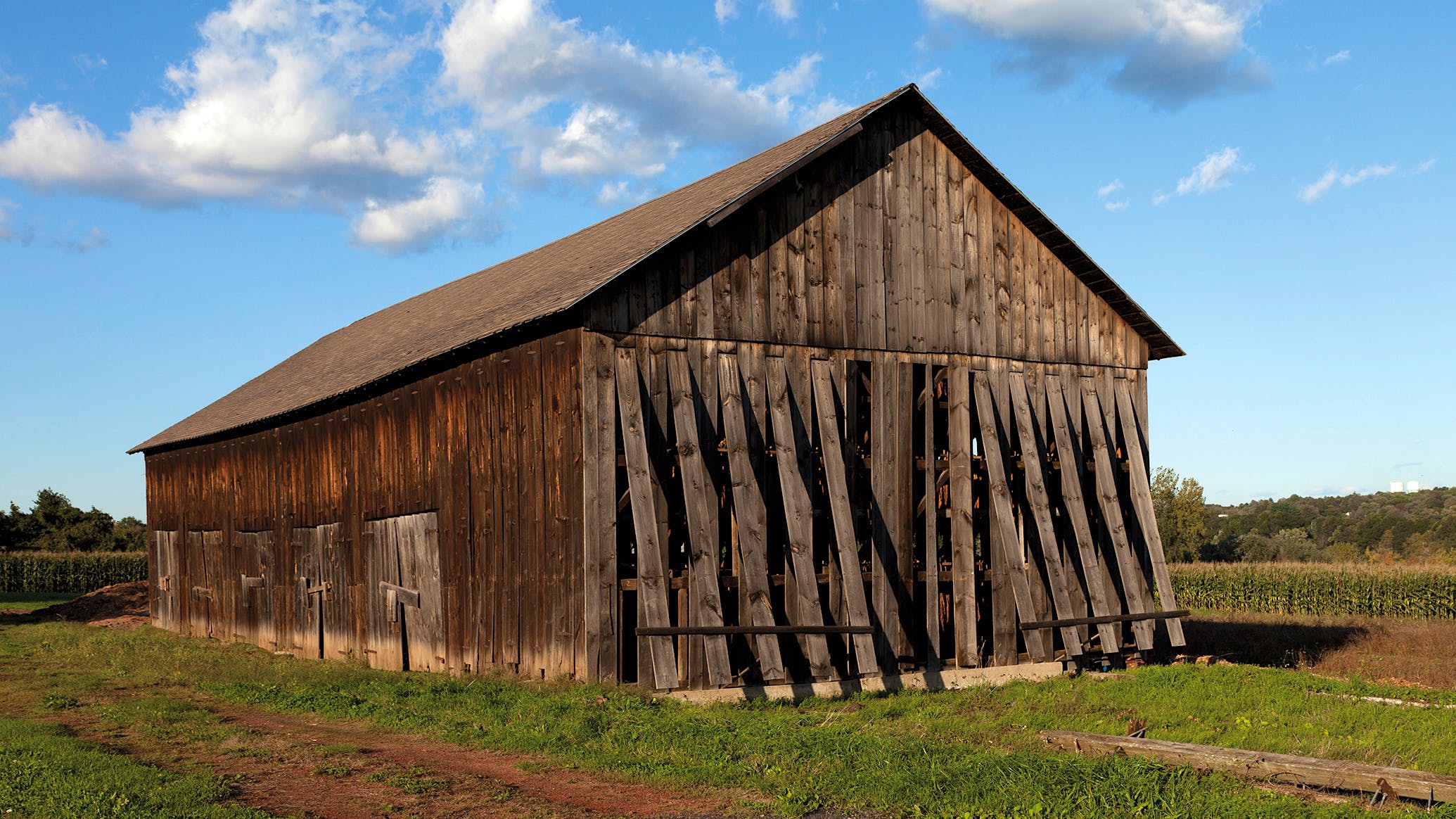 The tobacco barns of the Connecticut River Valley have been standing proudly in such towns as Windsor and Enfield for more than 100 years, holding golden brown Connecticut shade and robust, dark Connecticut broadleaf. They are sturdy and distinctive, designed with long, narrow boards on the side, running vertically with a hinge at the top, known as a Yankee hinge after the inhabitants of New England. Tobacco farmers swing them open to lower the temperature in a barn and increase air flow when needed.

The Cuban term for workers who sort cigar tobacco. In a cigar factory, tobacco leaves are sorted in many ways, including by type, size and color.