The Big Smoke Las Vegas had a new home this year, but the festivities were as good as they've ever been. This past Friday November 11 and Saturday November 12 at the new Resorts World Las Vegas, more than 3,000 cigar aficionados from all over the world gathered to celebrate cigars, meet the biggest names in the industry and mingle with like-minded folk. It was the 26th time Cigar Aficionado magazine has held the event in Las Vegas, with the first one occurring in 1995.

The show spanned the course of two days, beginning on Friday night as guests eagerly lined up more than hour before the 5:30 start time for VIP ticket holders. The energy and anticipation was palpable, not just from the attendees but from those on the casino floor as well. Anyone near the Events Center at Resorts World couldn’t help but notice that something big was about to happen, and inquiring heads turned to see the crowd getting ready to enter the venue.

As 5:30 rolled around, the first wave of guests quickly made their way inside the double exhibition halls, venturing off in every possible direction with some heading straight for their favorite cigarmakers while others gathered around a table or simply grabbed a drink from one of the many spirit vendors in attendance. The general admission crowd would soon follow, each guest sporting a Cigar Aficionado tote bag and a book of tickets ready to be plucked away in exchange for premium smokes from some of the biggest names in the industry. 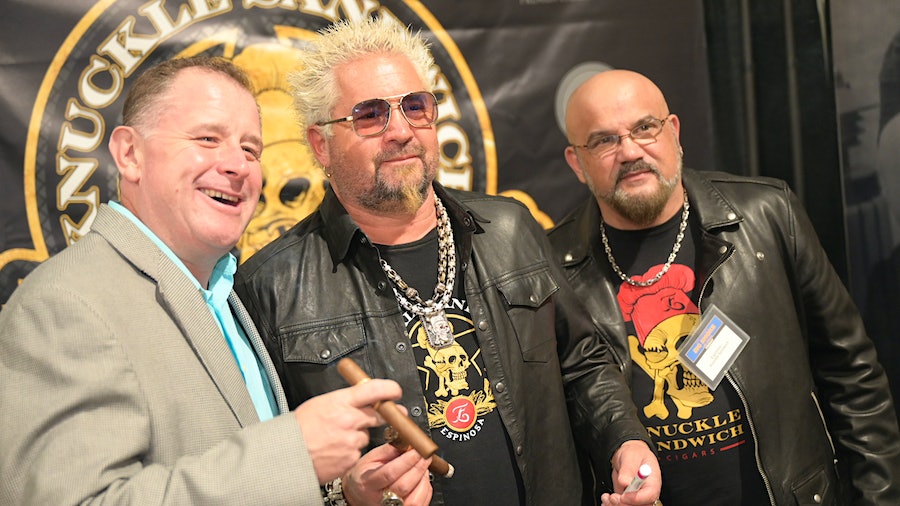 As guests came through the main entrance, they were greeted by a large, lit-up “BSLV” sign, the acronym for the event name, with the famous J.C. Newman El Reloj factory replica displayed picturesquely in the background. Big Smoke took place in two exhibition halls that largely mirrored one another, each with food and water stations, spirits, cigar and accessory vendors, and plenty of tables with chairs and cocktail tables scattered throughout. The hall where guests entered was slightly smaller than its counterpart, as the other had space for a few more vendors and tables, as well as the stage for the live band, which played a wide range of notable covers both nights, from all-time classics to modern-day hits.

There were also cigar accessory and other industry vendors present, such as Boveda, Cigar Rights of America, Eight Cigar Bar, Integra Specialty Products, Newair, Rabbit Air and The Cigador. 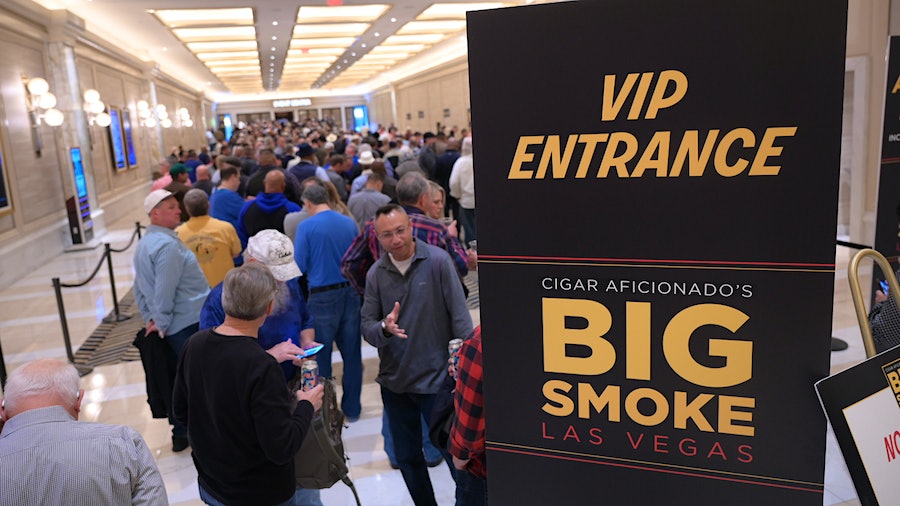 The crowd was just as lively and numerous on Saturday night as they were the evening before. In fact, the line to get in Saturday started and grew even earlier than the night before and had to wrap around as eager guests started encroaching well onto the casino floor.

As always, attendees came dressed to impress. The range of outfits mirrored that of your closet, with some casually sporting shorts and t-shirts and others dressed to the nines in well-tailored suits and eye-popping, colorful blazers. A number of groups came in coordinated outfits, with some simply sporting matching short sleeve button-down shirts, others in matching smoking jackets and one group wearing full Adidas sweatsuits with big gold chains as if they had just walked out of a Run DMC music video. 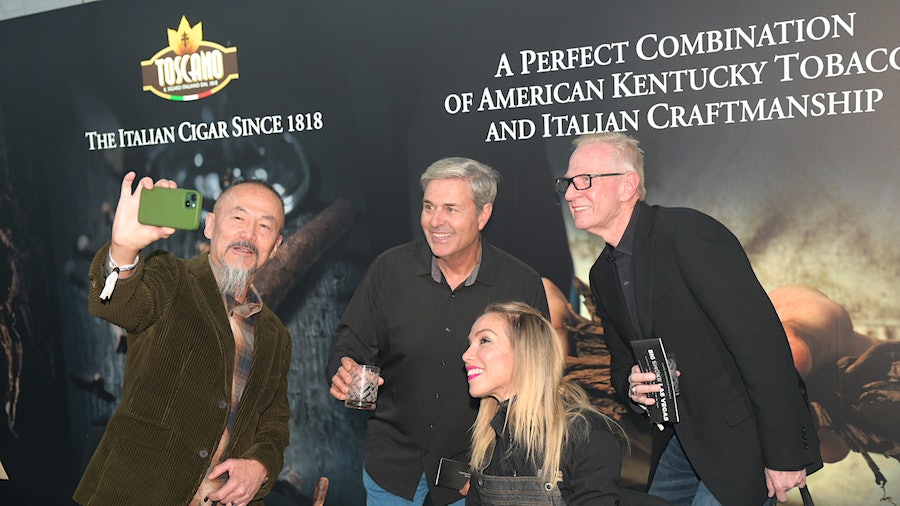 One group of friends traveled a heroic way to get to Las Vegas, attending the Big Smoke for the first time in hopes that it might replace the cigar tradition they once had as American expats living in Singapore. Tim Bethune (Minneapolis), Michael Abraham (New York City), Leonard Scott and Jonathan Scott (Houston), and Robert Stampes (Singapore) all met a few years back while they were living in Singapore. These men came from different walks of life, with varied professional occupations, but bonded over a couple distinct commonalities, which were a love of cigars and their shared status as Americans living in a foreign city. The group started having weekly cigar nights every Thursday at cigar bars throughout Singapore and what started as a small group, eventually blossomed into a squad of roughly 15 people. But eventually, it would be time to come home for some. “When we all started repatriating back to the States, we decided to make Big Smoke our new thing,” said Michael Abraham. The men have done other trips together, but hope this cigar celebration can be their new routine. Next year, they plan to get more from the group in Singapore.

Denis Thomas and Robert Tranquille have been coming to the Big Smoke for years. The two friends from Montreal relish in the opportunity to travel to Vegas each year, turning the trip into a week-long endeavor. Las Vegas and the Big Smoke, in particular, offers them the opportunity to stock up on non-Cuban cigars that are quite costly at home, as well as an enhanced freedom to smoke, which has become challenging back in Montreal.

“There’s really only two places left in Montreal where you can really smoke,” said Denis Thomas. The two do all they can to support their local industry but they look forward to the chance each year to experience a completely contrasted environment that the Big Smoke offers. 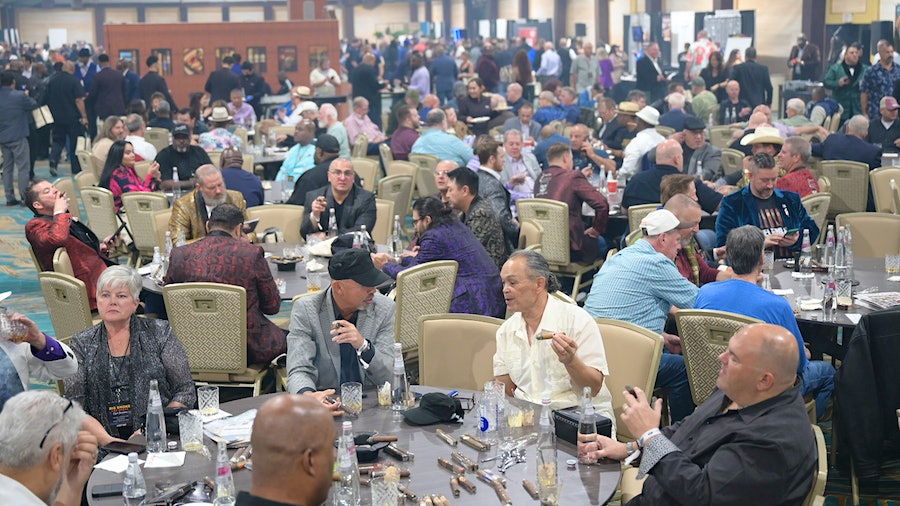 The evening sessions featured two rooms, both of them cigar friendly. Here some people take a seat while others walk the room.

Sean Roller, a middle school band teacher and National Guard reservist from Seattle, was at Big Smoke in Vegas for the 11th straight year. Sean had a big grin on his face as he sat talking at a table early on Saturday night. He was smoking his first Cuban, a Partagás that was given to him by a Canadian friend he met at the VIP All-Access event at the Eight Cigar Bar just before the Big Smoke evening on Saturday. Sean is a longtime smoker, but says he really dove into the cigar world head-first the last 10 years or so. He rarely takes time off from work as a teacher and admits he doesn’t like to do so, but can’t help himself when it comes to the Big Smoke. “Every year, my friend and I wonder at the end of Big Smoke, ‘will we come back next year?’ And every year, we end up right back,” said Sean. “We really appreciate all you guys do for us and cigars.”