Share
Part of the festival is a field trip to the tobacco plantations of Cuba's Pinar del Río growing region.

While there’s nothing quite like being at the Habanos Festival, we’ve provided what we think is the second-best thing: a photo account of the festival highlights. From seminars to factory tours to field trips out to tobacco farms, the Habanos Festival strives to give the world a firsthand look at Cuba’s premium cigar industry. The days are loaded with activities, but the nights become celebratory affairs with cocktail hours, dinners and live music.

This year marks the 20th anniversary of the jubilant event, formally known as the Festival del Habano XX. It’s an unusual time of year for Habanos S.A. as Cuba’s tobacco fields and cigar factories are normally closed to the public. During the festival, however, Habanos gives guests a comprehensive view of the cigarmaking process, from the fields to factories. Our photographer returned with many photos (perhaps too many, if there’s such a thing) and after sorting through thousands of shots, here are some of the moments in Cuba we’d like to remember and share. 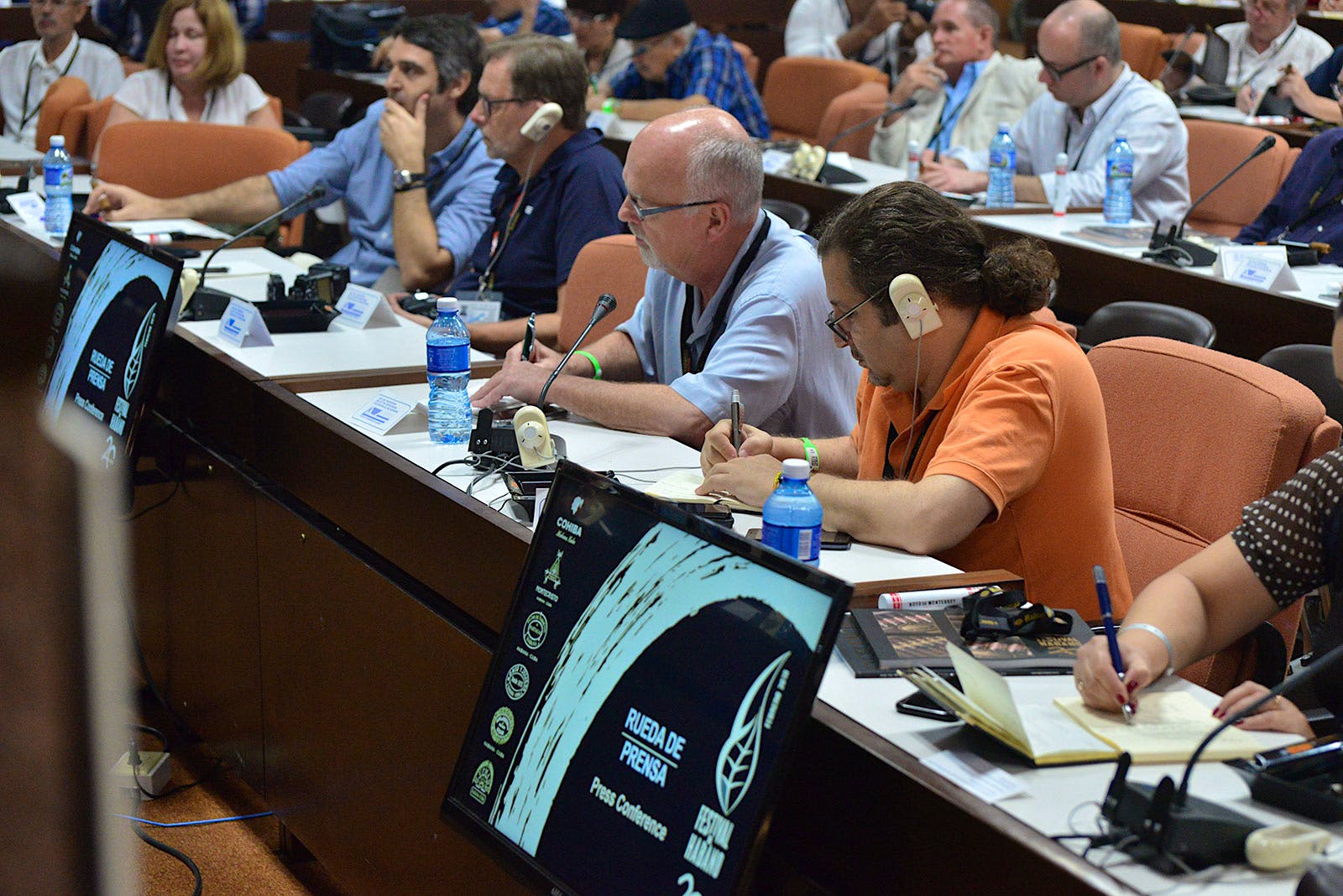 Our Man in Havana, Gordon Mott (also our senior contributing editor) takes copious notes at the official press conference. He’s the one in the blue shirt, but notice he’s not wearing a translator on his ear. Those are audio translators for those who can’t speak or understand Spanish. Mott does both. Last year, he was named Habanos Man of the year. 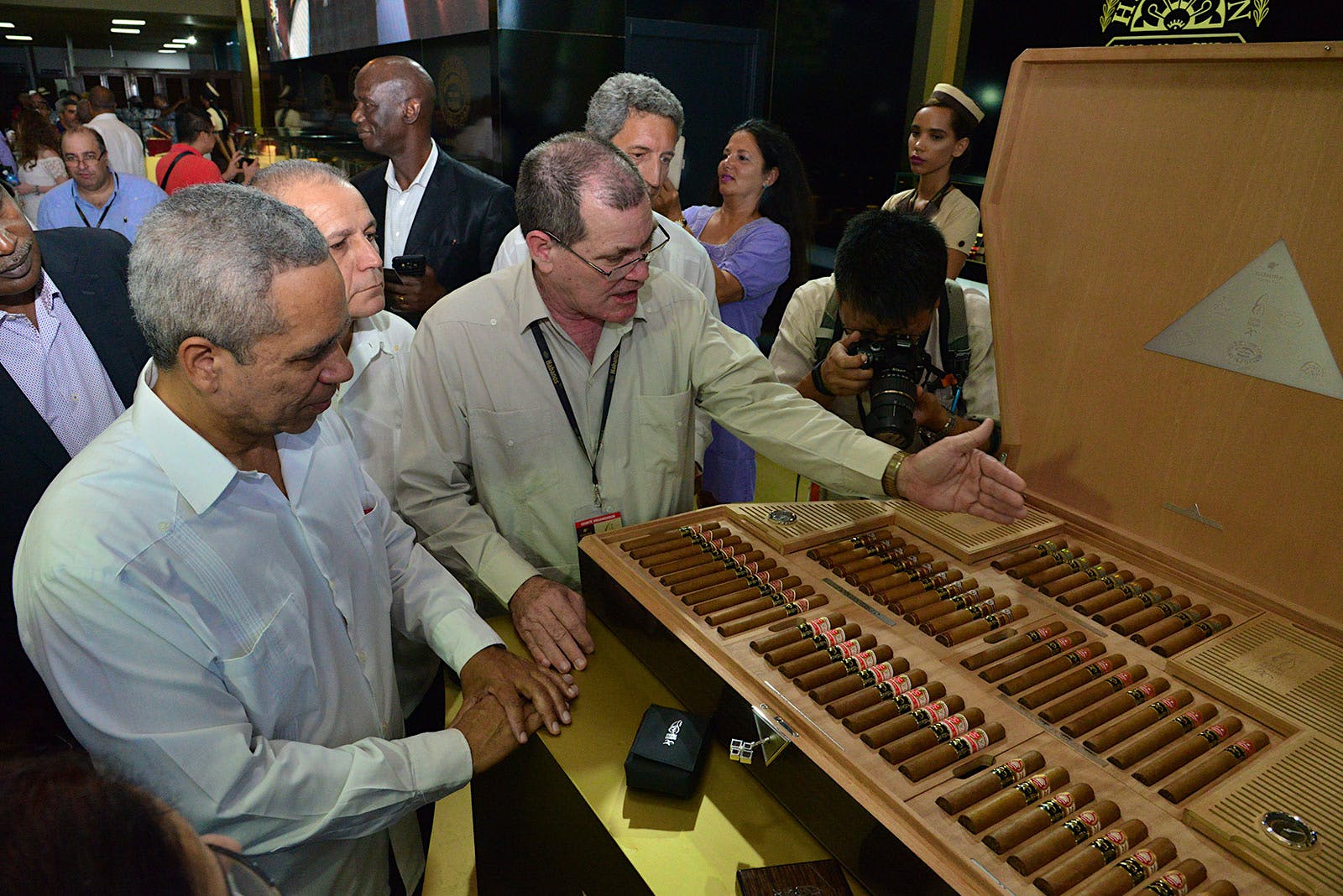 The Trade Fair is a series of pavilions set up in the Convention Center, where most of the seminars take place. One of the show-stoppers of the Trade Fair was this giant humidor commemorating 20 years of the Habanos Festival. Habanos co-president Inocente Nuñez Blanco shows off the elaborate collection of cigars, which was assembled to represent the most emblematic global brands of Habanos: Partagás, H. Upmann, Hoyo de Monterrey, Cohiba Behike, Romeo y Julieta and Montecristo Linea 1935. The humidor holds 20 of each brand, or 120 cigars in all. 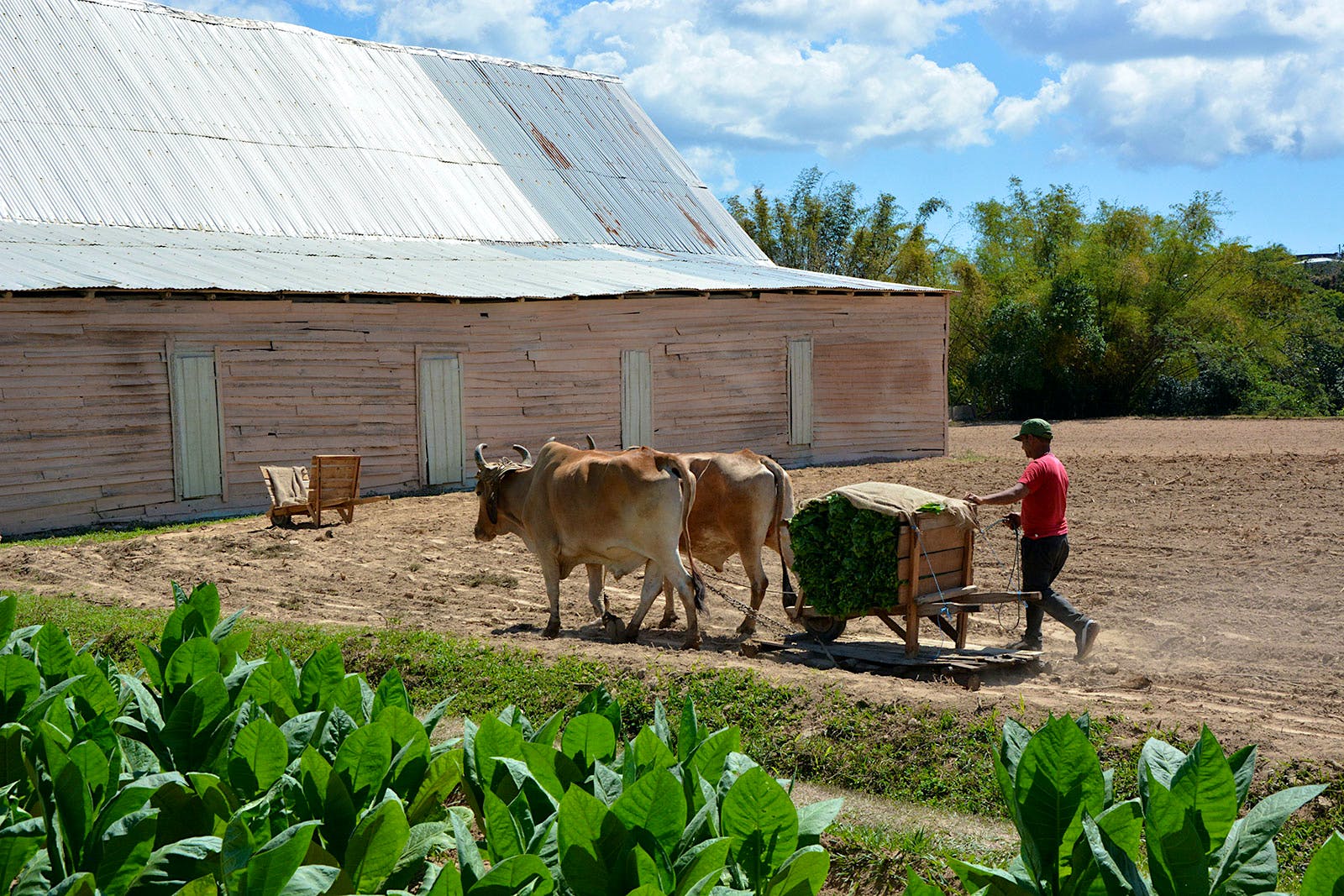 A field trip out to the tobacco plantations brought the tour to the Finca El Valle farm in Pinar del Río's San Juan y Martínez region, which is considered the country’s most fertile ground for producing the best-quality tobacco. The province is located on the Western end of the country, a few hours drive from Havana. It may seem anachronistic, but on tobacco farms, oxen are still put to work. These shown here pull a cart of tobacco to a curing barn. 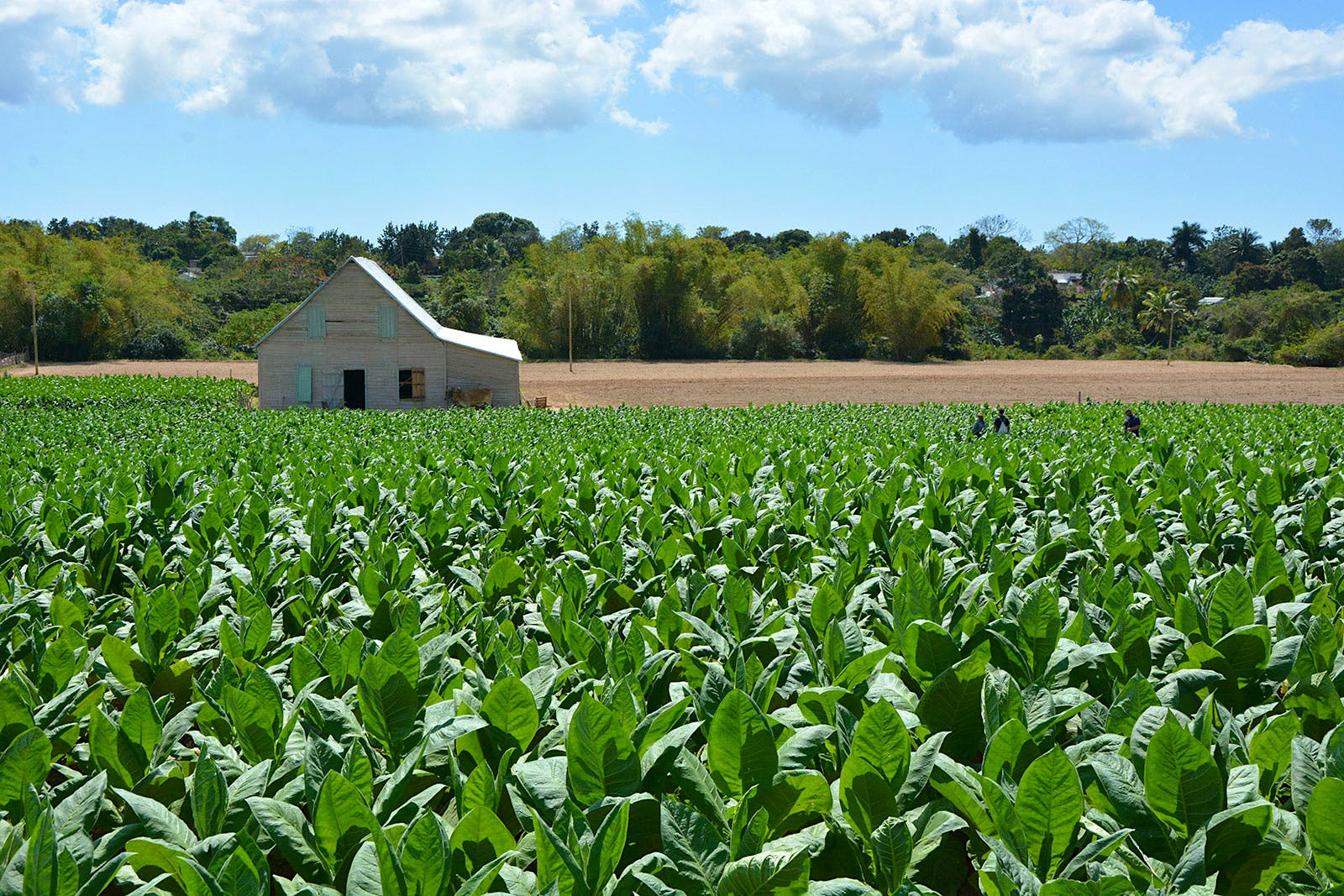 Many don’t know that most growers in Cuba can only plant seeds approved by the government’s tobacco institute. These seeds are normally chosen because they resist disease and provide high yields. However, the tobacco from these strains have all undergone a rigorous approval process through a tasting panel in order to preserve the necessary flavor and aromatic properties that define Cuban tobacco. 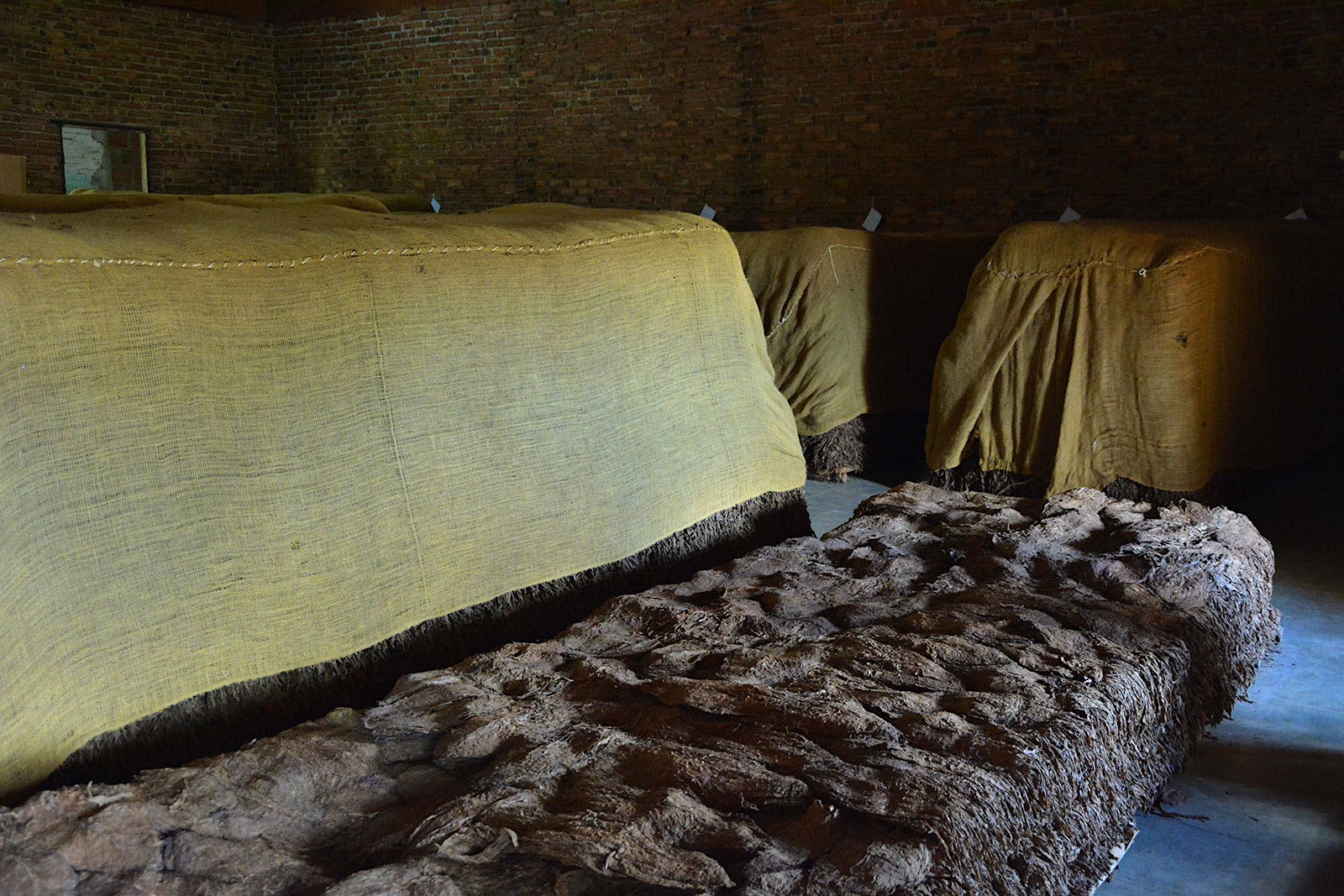 After the tobacco is hung in the barn to dry, fermentation is, of course, the next step, and perhaps the most important. In another facility, Cuban tobacco ferments in large pilones before it’s eventually sent to the factories. 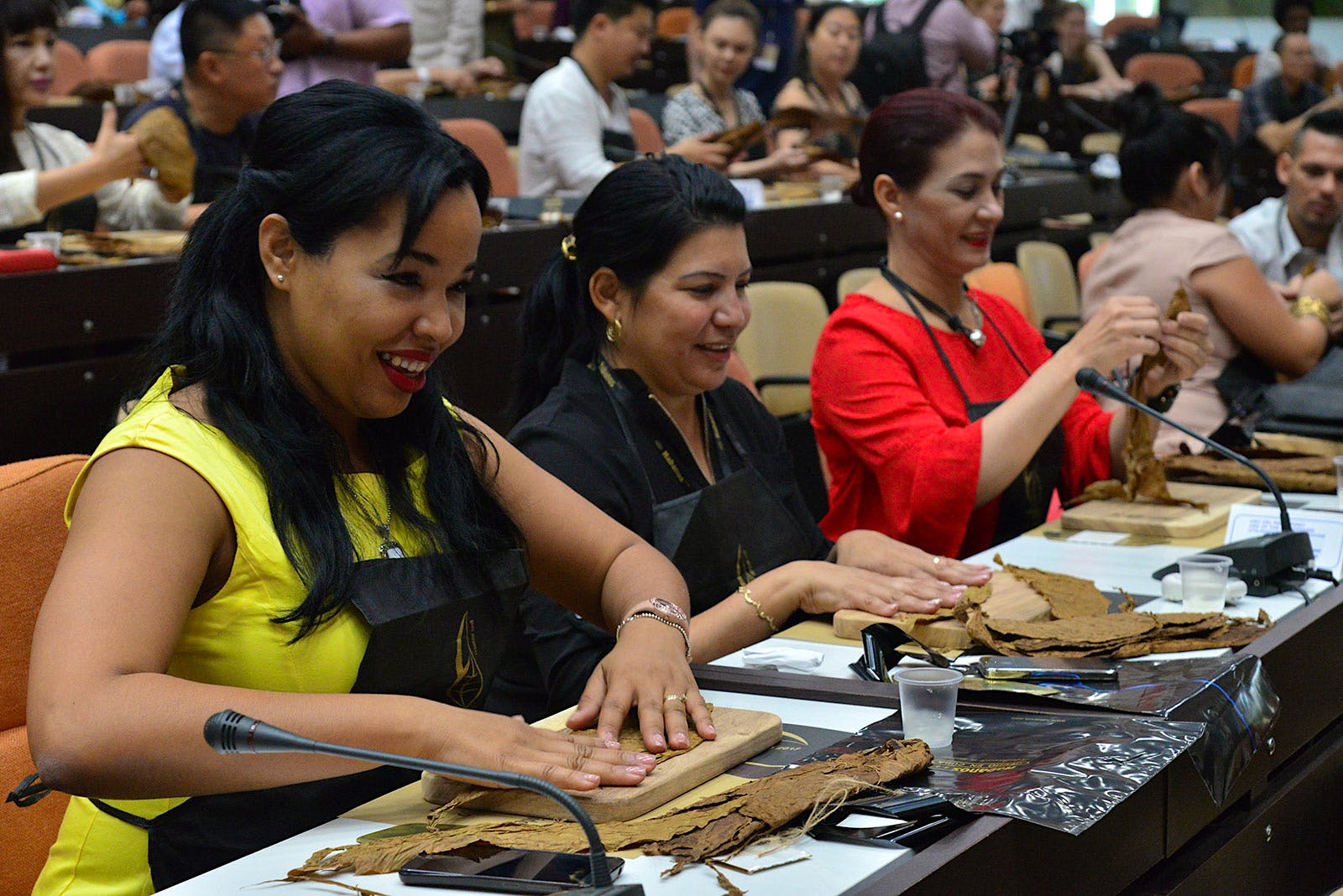 Back at the convention hall, a number of attendees learn how to roll a cigar during an instructional seminar. All get a place setting complete with a chaveta, rolling surface and tobacco. As all in the rolling seminar realized, smoking cigars is far easier than making them. 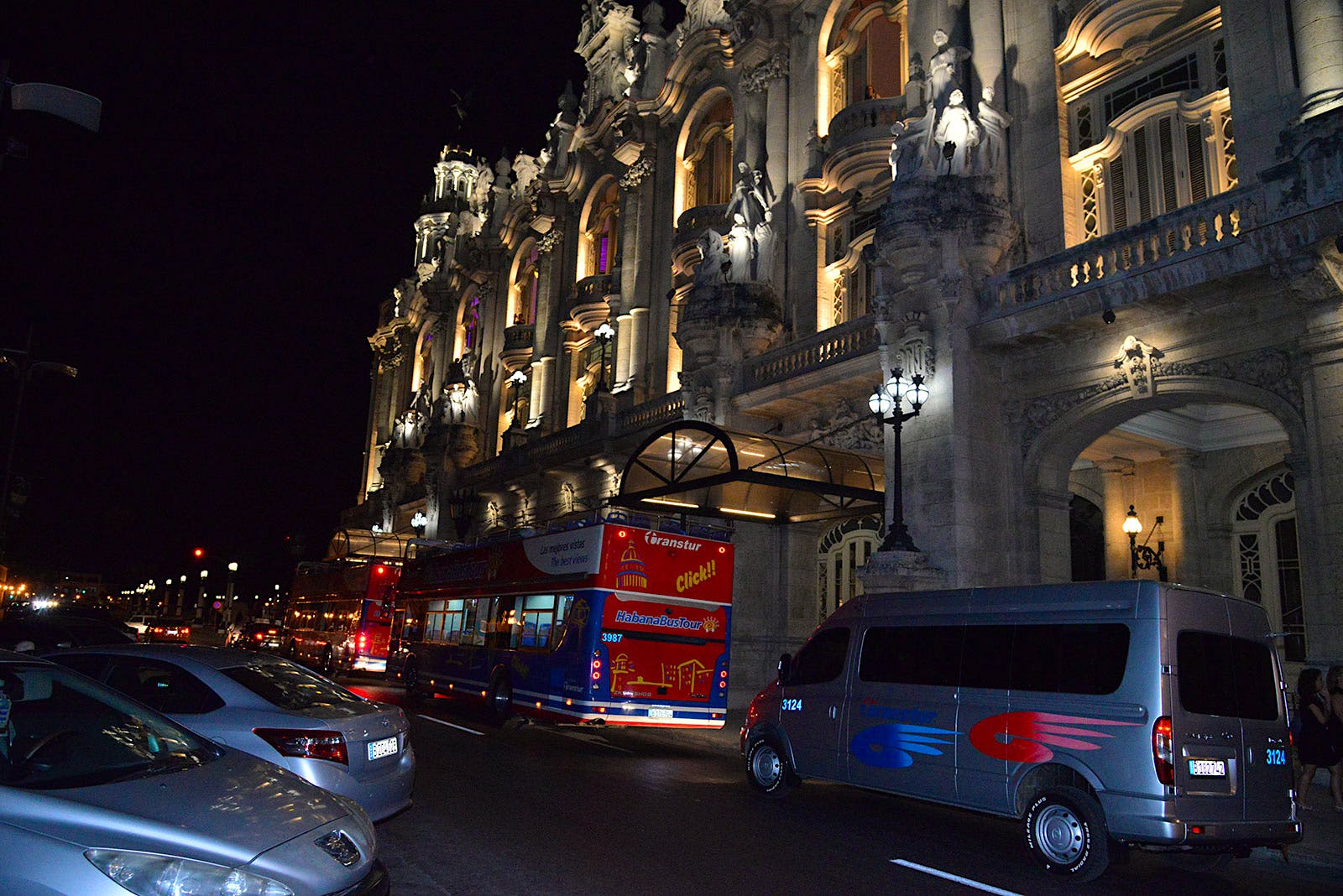 Following a series of performances at the Teatro Martí, Habanos held its lavish cocktail hour in the ballroom of the Gran Teatro de la Habana, a beautiful theater located in downtown Havana, not far from the capitol building. 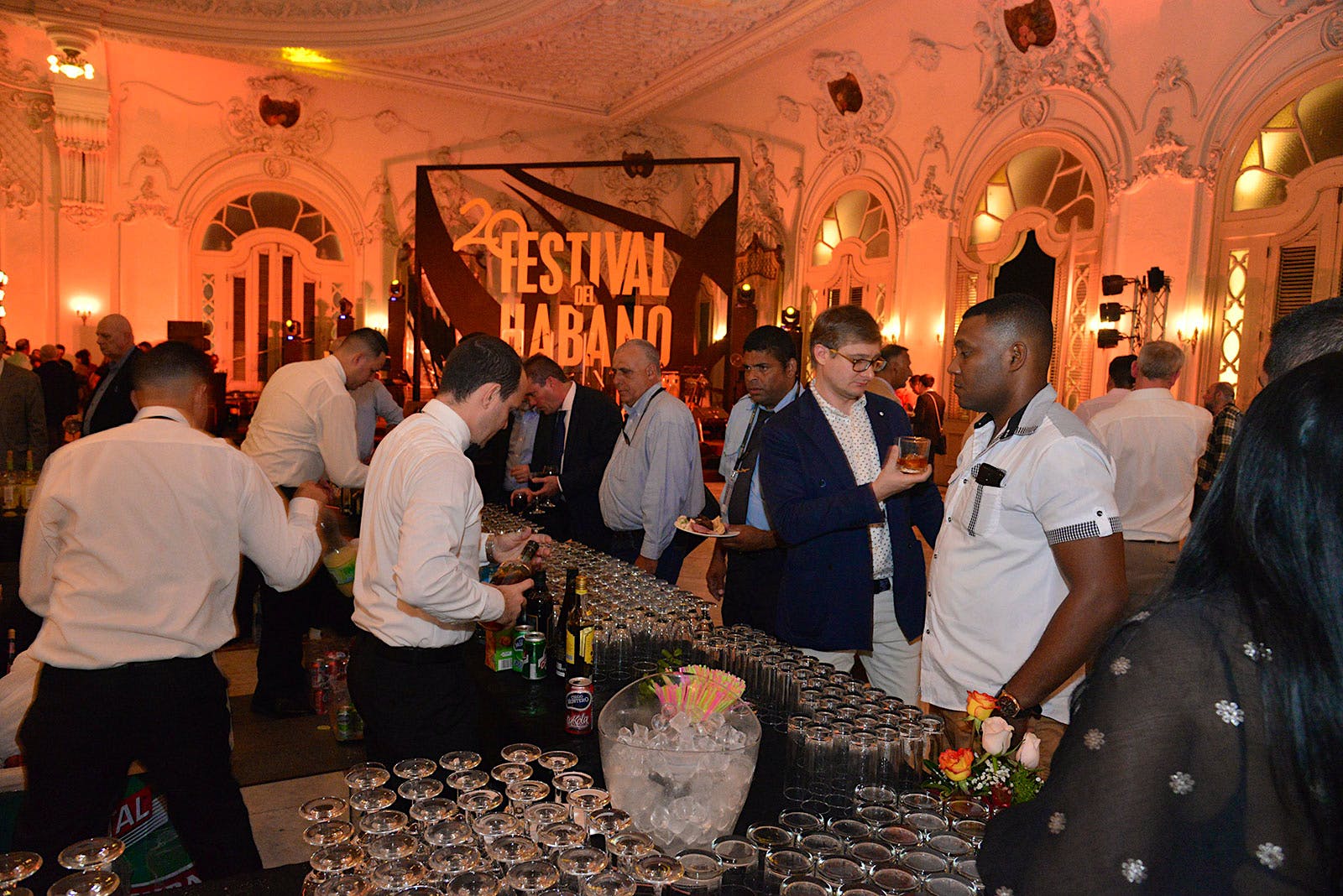 It was the 20th anniversary celebration of the festival where food, drinks and cigars were all served in a regal, ornate setting. Live music and a gift-bag of cigars set the festive tone. 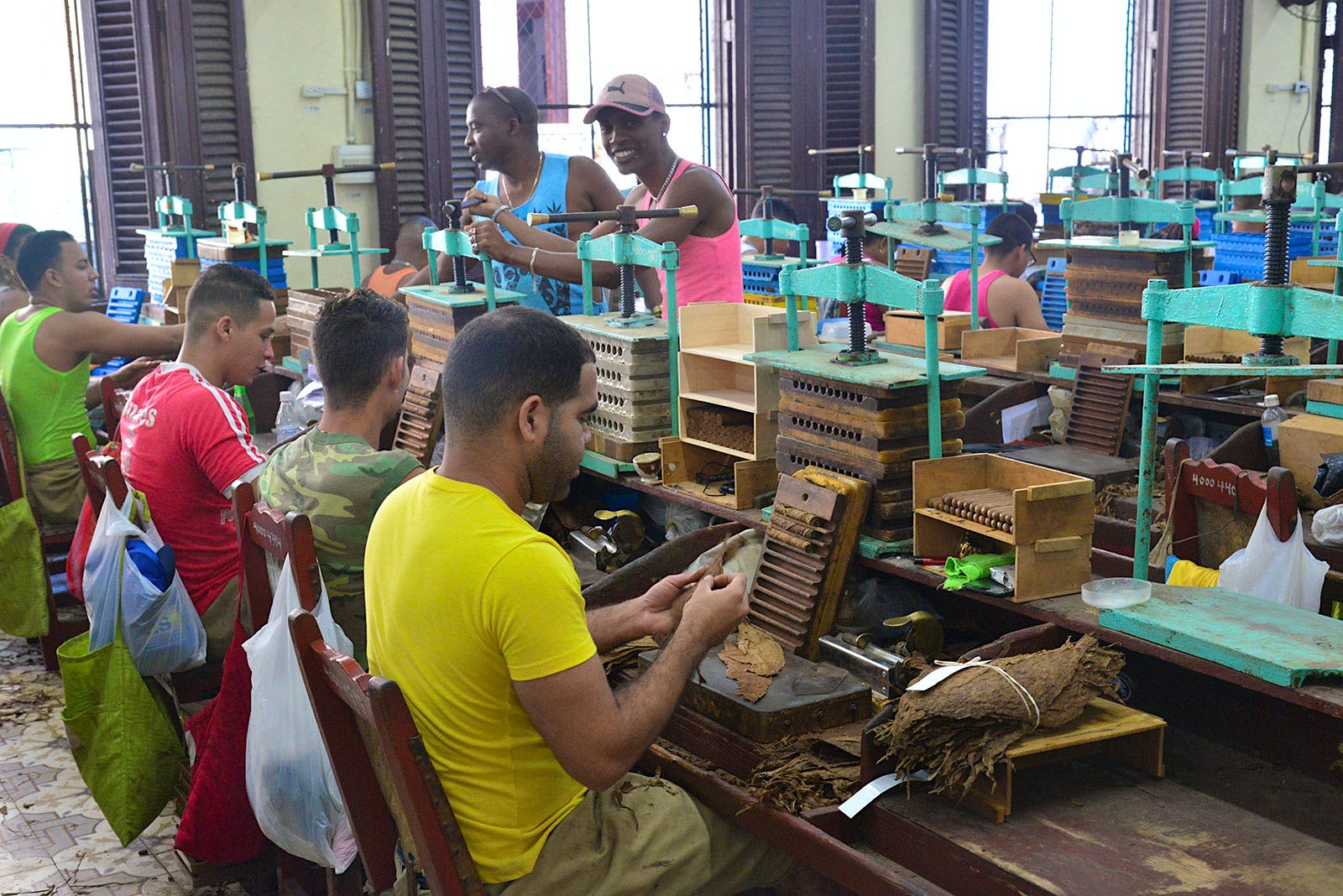 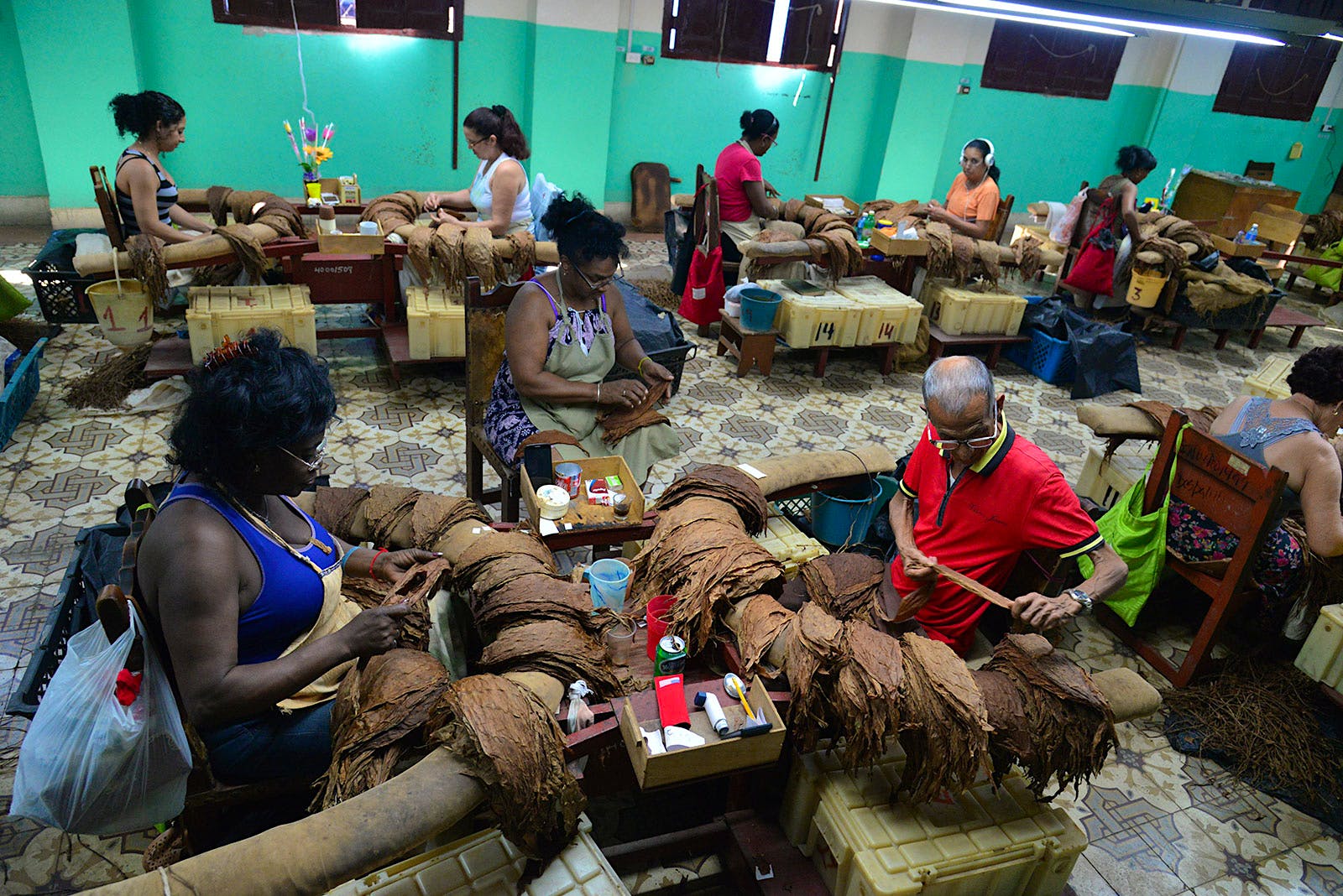 While rolling is done in one section of the factory, another is dedicated to the sorting of wrapper leaf, a meticulous process done mostly by women, who are believed to have a better sense of color variation than men. 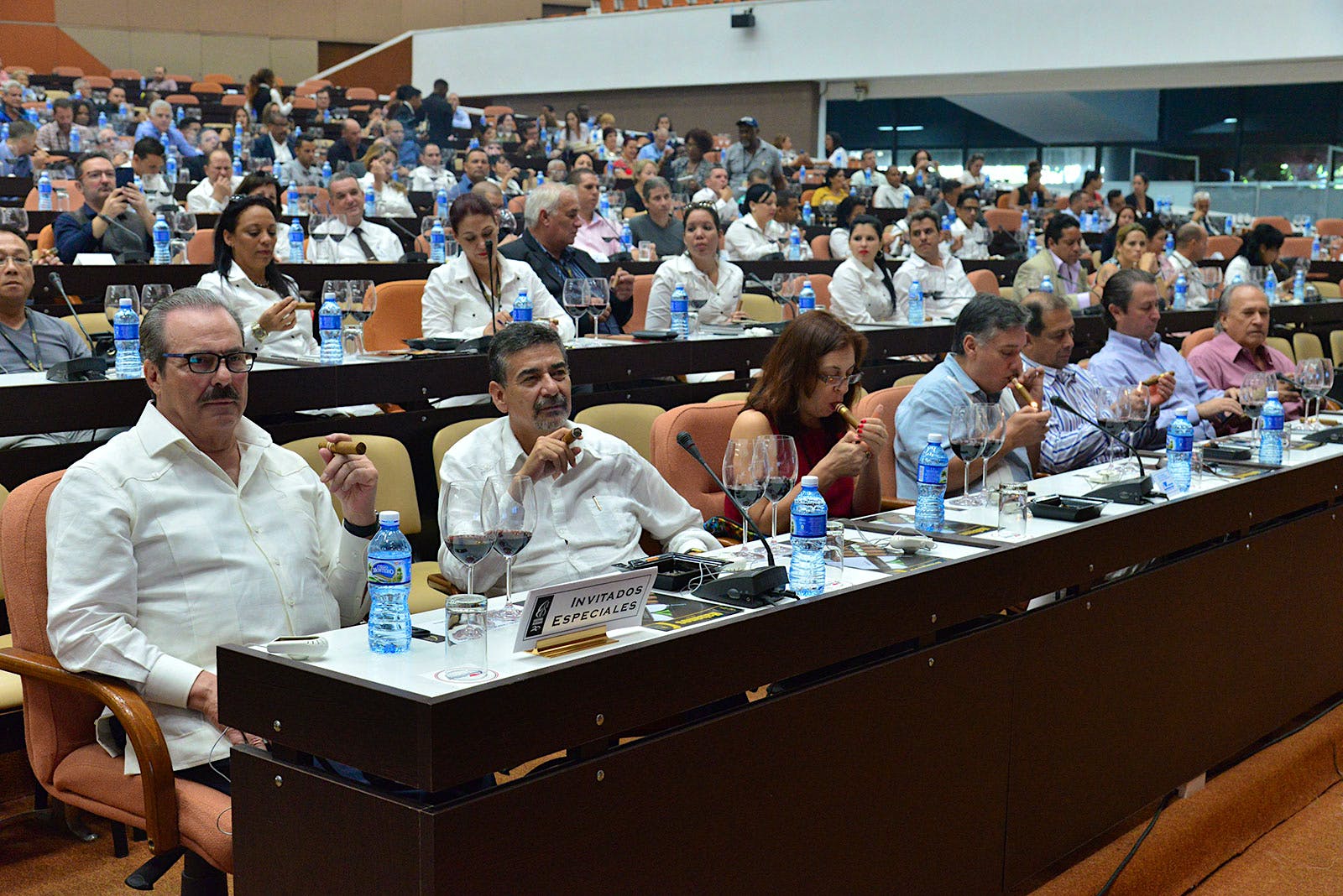 Some say that wine can’t pair with cigars on account of its acidity. This has never been the position of Habanos, as the wine-pairing seminar keeps coming back to the festival. This year, cigar enthusiasts were asked to pair Chilean wines from Viña Santa Carolina with a Romeo y Julieta Wide Churchill. 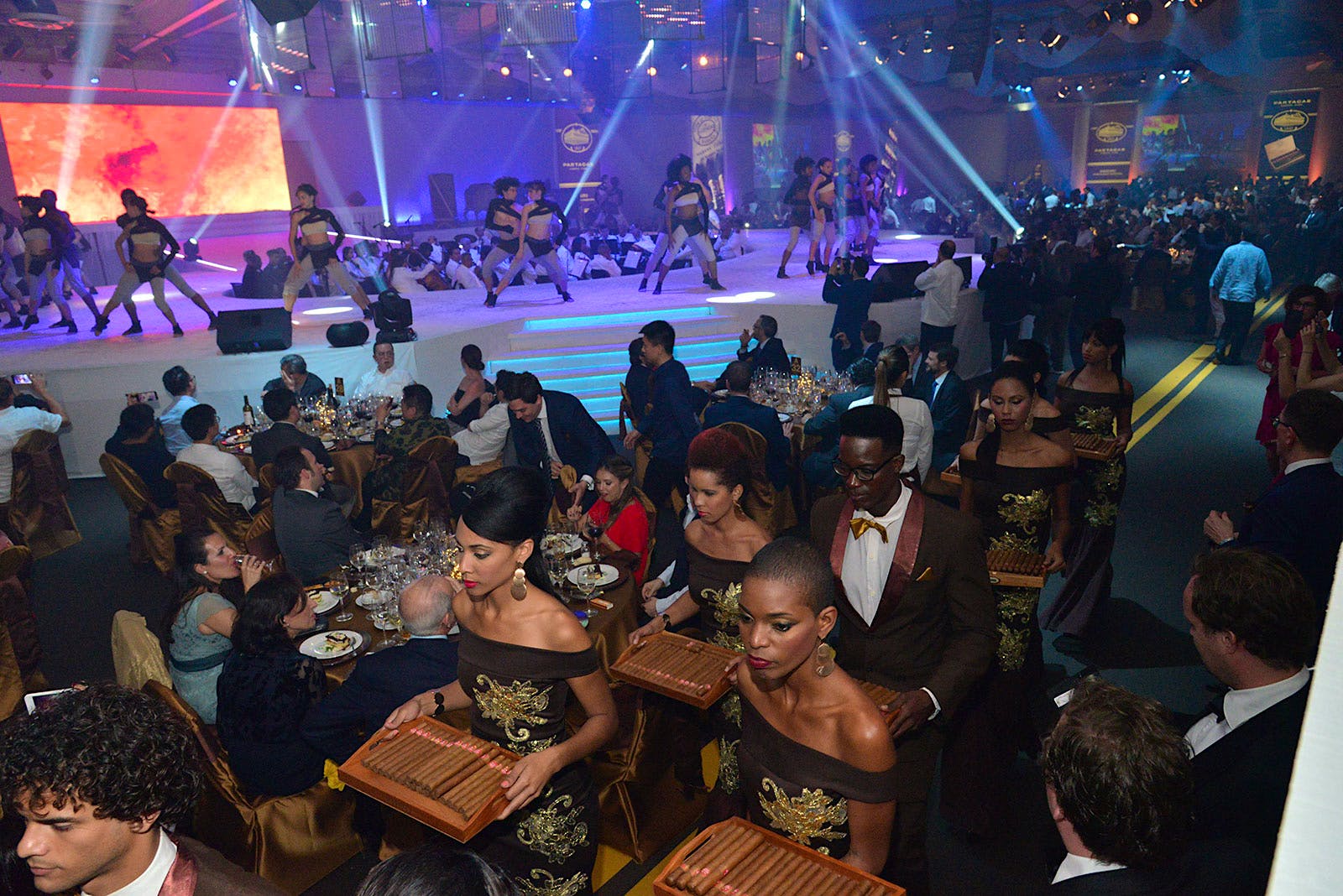 The entire Festival crescendos at the final night. The Partagás brand took center stage to highlight the new Linea Maduro series. Beautiful servers passed out Partagás Lusitanias as the final cigar for guests to smoke during the course of the evening, which ended in an auction of unique, sometimes over-the-top humidors. Take the Cohiba humidor for example. 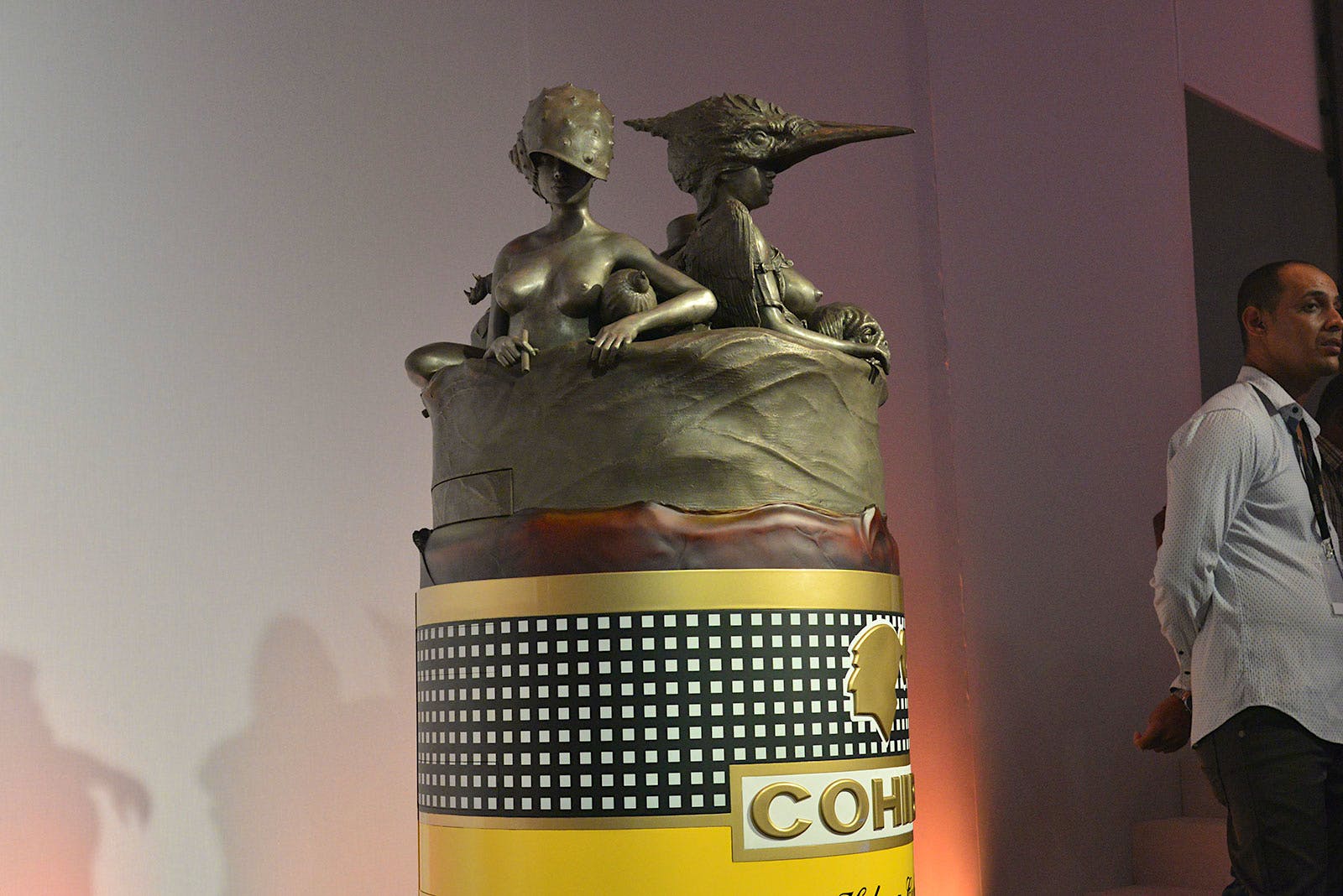 The humidor looks like a burning Cohiba cigar topped with a sculpture by Cuban artist Roberto Fabelo. It came filled with 550 cigars, including a full selection of Cohiba Behike BHKs, Maravillas, Talismáns, 1966s and the full Siglo range. It now belongs to Hamed Abouzahr, a Lebanese Peruvian who distributes Habanos cigars in Peru, Bolivia and Ecuador. He paid about $418,000 for it.