A group of tobacconists and a premium cigar manufacturer in Texas say the FDA’s new cigar warning requirements are a violation of their First Amendment rights, and so they have united to file a joint lawsuit against the government agency.

The complaint was filed last Thursday in the U.S. District Court for the Eastern District of Texas by En Fuego Tobacco Shop, which operates three locations; Cuba Libre Enterprises, owners of the El Cubano Cigar Factory; and the Texas Cigar Merchants Association that represents premium cigar manufacturers and retailers in the state.

The main contentions of the lawsuit filed in Texas are related to the FDA’s warning label and warning plan requirements, which is scheduled to go into effect on August 10 after being extended in September 2017. The requirements, which are part of the agency’s controversial Final Rule that was published in 2016, forces manufacturers and retailers to affix larger health warning labels on premium cigar boxes (and even cellophane wrappers) while imposing more stringent placement of said warnings. Additionally, the new rules demand that manufacturers and retailers submit a warning plan for FDA approval a year in advance, and also change up the requirements for warnings on cigar advertising. (Read New FDA Warning Labels Explained for more details.)

Currently, nearly every cigar package on the market displays one of four warnings that was settled upon in 2000 when the Federal Trade Commission and the then seven largest U.S. cigar manufacturers agreed to include health warnings on their products. In that case, it was decided that the FTC warnings must cover between 13 to 15 percent of one cigar box panel.

According to the new FDA's Final Rule, the warning labels on a typical cigar box will need to adhere to the following specifics:

• Comprise at least 30 percent of each of the principal display panels.

• Be printed in at least 12-point font size.

• Be printed in conspicuous, legible Helvetica bold or Arial bold type, or other similar sans serif fonts, and in black text on a white background or white text on a black background in a manner that contrasts by typography, layout, or color, with all other printed material on the package.

• Be capitalized and punctuated.

• Be centered in the warning area in which the text is required to be printed and positioned such that the text of the required warning statement and the other information on the principal display panels have the same orientation.

The Texas lawsuit argues that “by seizing 30 percent of each of the two principal panels of a package, the [Final] Rule takes up to 475 percent more of the surface area of the package than the FTC warnings do.” The suit continues by saying that the “new required warnings will cover up space where manufacturers and retailers speak to consumers … The sheer size and stark format of the warnings ensures that the Government’s message—its health warning—will become the dominant message on the box.”

The FDA is not only increasing the size requirements of warning labels on physical cigar boxes, but also on cigar advertisements. According to the new rules, the new warnings must occupy 20 percent of all cigar advertisements. The Texas lawsuit argues that the FDA’s definition of advertisement is too broad because it covers every medium, from signs, flyers and emails, to radio, television, websites, social media and “even in-store placards describing the products for sale.” 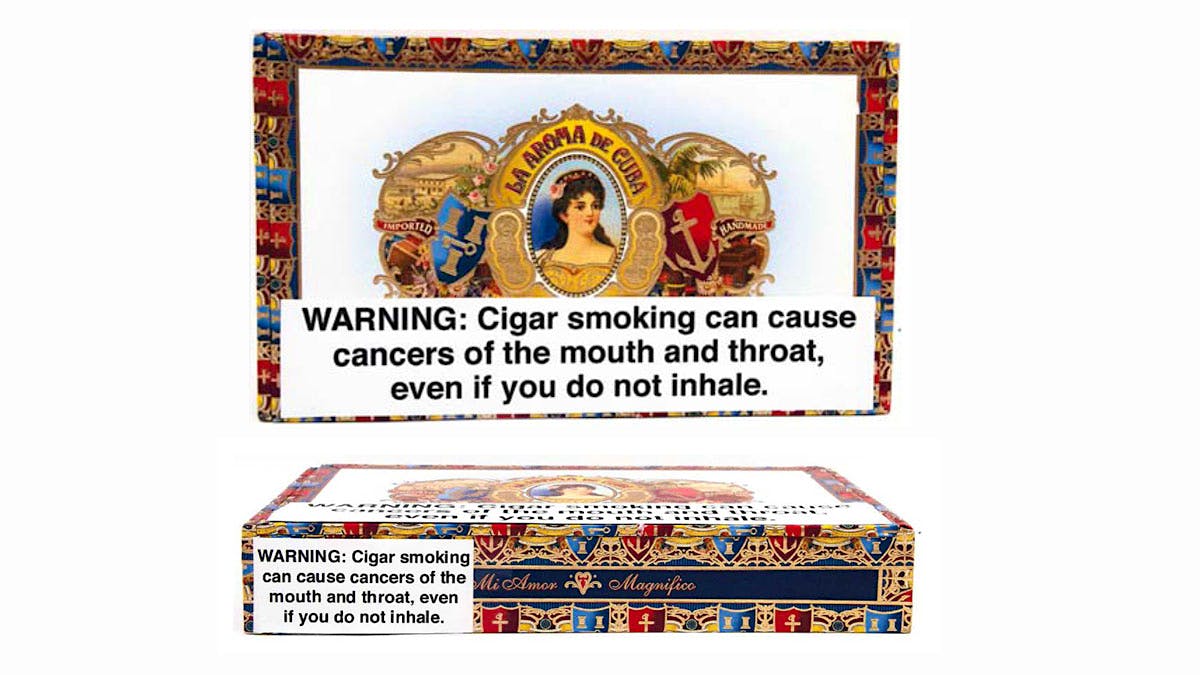 Cigar box images included in the lawsuit depict the sheer size and stark format of the warning labels.

The FTC decision in 2000 also included cigar advertising, as it requires a warning cover on 7 percent to 16 percent of an advertisement. According to the Texas lawsuit “The FDA [Final] Rule requires the Government’s message to cover 20 percent of each advertisement, up to nearly 300 percent more than the FTC warnings.”

According to the Texas lawsuit, “The [Final] Rule does not materially advance any Government interest because, among other reasons, the agency has admitted there is no reliable evidence that the speech restrictions effected by the warnings will reduce the use of cigars…”

“El Cubano Cigars is proud to represent the premium cigar industry in this lawsuit against the FDA’s new warnings regulation,” said Manny Lopez, of El Cubano Cigars. “The warning labels will mar the appearance of our products and take valuable space we use to speak to our customers. The warning labels are so large they will become the dominant message on our packages and in our stores. In addition, the FDA is requiring us to ask their permission to advertise our products at least a year in advance. We are confident this regulation violates our First Amendment rights. This is why we are going to court.”

In addition to adjusting the actual warning labels, the new FDA rules require cigar manufacturers, distributors, importers and retailers to submit a “warning plan,” similar to what cigarette and smokeless tobacco manufacturers must do. A warning plan, according to the FDA's Final Rule, ensures that each of the required cigar warning labels will be randomly displayed in each 12-month period, "in as equal a number of times as is possible on each brand of cigar sold in product packaging and randomly distributed in all areas of the United States.”

The Texas lawsuit argues that the warning plan “is an unprecedented incursion on First Amendment liberties. The harm to freedom of speech is especially severe for retailers: If a neighborhood tobacconist wants to announce a sale, or even just to tell its customers about a new cigar on offer, it must ask the FDA’s permission with at least one year of lead time.

Daniel Trope, the director of federal legislative affairs for the International Premium Cigars and Pipe Retailers association, is backing the new Texas lawsuit. “IPCPR applauds the decision by plaintiffs in the Texas suit to stand up for their constitutional rights and file suit against the onerous aspects of the FDA’s deeming rule,” Trope said. “We look forward to monitoring these developments as the legal process unfolds. We also continue to pursue a remedy on behalf of the industry through separate and ongoing litigation in Washington D.C.”

The Cigar Rights of America also sees the lawsuit as a positive step in the cigar industry’s fight against the FDA’s Final Rule.

“En Fuego Tobacco Shop, El Cubano as a manufacturer of premium cigars, and the Texas Cigar Merchants Association brought their own lawsuit in a Texas federal court against the FDA’s warnings regime,” said Glynn Loope, executive director of the CRA. “The lawsuit asks the court to strike down the new warnings as unconstitutional. Cigar Rights of America shares the view of these new plaintiffs that the rule violates the First Amendment. The warnings are too large and they inhibit too many routine communications with consumers.”