The Football Gods were watching over Knoxville, Tennessee on Saturday for an epic night of college ball that included a major top-10 upset victory, stolen goal posts and a whole lot of victory cigars.

The No. 6 ranked Tennessee Volunteers squeaked out a nail-biting victory in a thrilling SEC heavyweight battle by defeating perennial juggernaut and No. 3 ranked Alabama, 52-49, ending a 15-game losing streak to the Crimson Tide. The post-game celebration included the typical exuberant chaos we get a few times every college football season, but between the field rushing and adrenaline-fueled screams, fans, players and coaches were lighting up cigars everywhere you looked in a time-honored tradition that goes back more than 60 years. 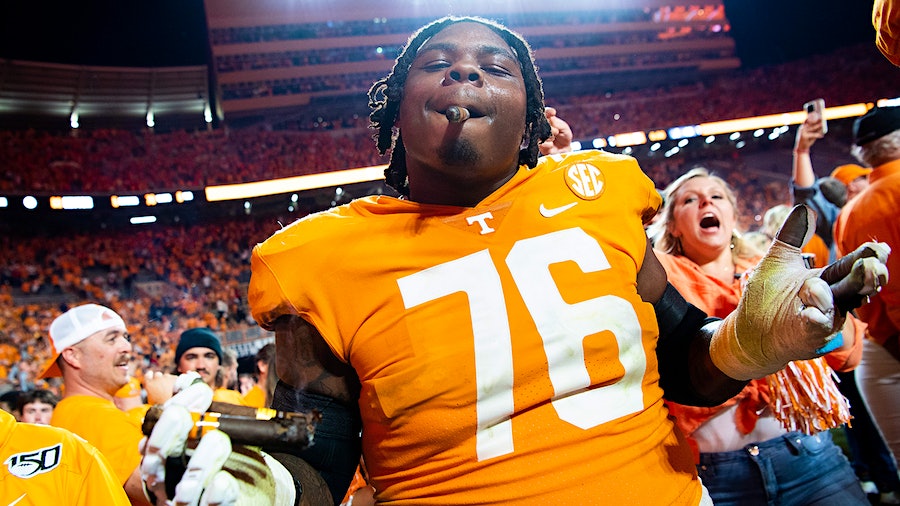 Known as the “Third Saturday in October,” referring to the date the game used to always be played, the Alabama-Tennessee rivalry is one that stretches back to 1901. The colleges are located just 310 miles from one another and have had a fiery passion for battles on the gridiron for over 100 years. Alabama leads the all-time series by a comfortable margin, but no program in the nation has beaten the Alabama Crimson Tide more than the Volunteers.

The historic rivalry introduced a new tradition in 1961, one that has been more consistently honored than their expected playing date, with victory cigars for the winner. Legend has it that back in ’61, the head athletic trainer for Alabama Jim Goosetree said he’d have stogies for the team if they could end their losing streak against Tennessee, which at the time went back to 1954. When Alabama won the game, it’s said that Goosetree lit up a cigar and danced around naked in the locker room. Ever since then, the winning-team has lit up smokes to cap off the yearly rivalry. 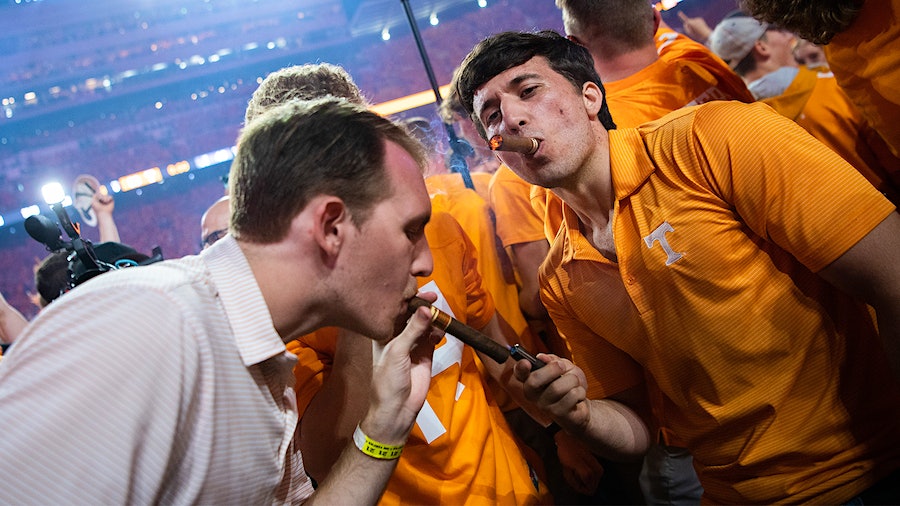 Fans helping one another enjoy a good smoke during the post-game celebration in Neyland Stadium. (Photo/Brianna Paciorka/News Sentinel/USA Today Network)

Coming into this weekend, the rivalry was the most anticipated it's been in years, with the undefeated Volunteers re-emerging as a top national contender this season and given the chance to prove themselves on the big stage against the powerhouse Alabama program. As the Volunteers were seeking their first win over the Tide in 16 years, the stage was set for a potential victory of epic proportions.

The game itself was a slugfest as, despite a hot Tennessee start, the Crimson Tide railed to take the ballgame deep into the fourth quarter. Led by a once-in-a-lifetime performance by wide receiver Jalin Hyatt (207 yards, 5 Touchdowns), Tennessee was put in a position to seal the game as time expired with a field goal attempt in a 49-49 ballgame. The Volunteers kicker Chase McGrath lined up and drilled the kick as the game clock hit zero, sending the stadium and entire state of Tennessee into a rapturous frenzy.

Within minutes of victory, fans could be seen all over the TV screen with cigars in hand, most already lit. CBS sideline reporter Jenny Dell gave Tennessee head coach Josh Heupel a box of cigars on live TV following their post-game interview after the victory. Even the Hall of Fame quarterback Peyton Manning, a Tennessee alum who was in attendance, was seen on the field and in the locker room puffing on a big smoke as he celebrated with the players and coaches. 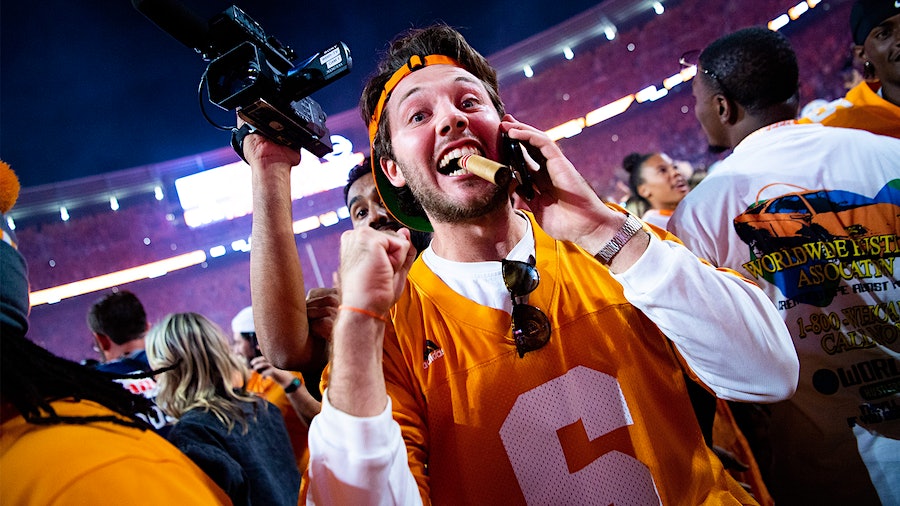 The thrill of victory sets in for this Tennessee fan amidst a win and celebration for the ages. (Photo/Brianna Paciorka/News Sentinel/USA Today Network)

The trained and experienced eye likely noticed a few familiar cigar brands during the celebration as smokes of every kind and make were lit up. Some of the noticeable brands seen on the field included Rocky Patel Decade, Oliva Serie V Melanio, Romeo y Julieta, Outsider from Jay Cutler and much more.

Inside the locker room, the team and staff luckily had a hearty supply of smokes waiting for them as Tim Ozgener of Nashville-based Ozgener Family Cigars sent 120 cigars earlier last week in hopes for such a victory. Ozgener, a Volunteer fan himself, got connected with the equipment manager for the team early last week and offered to help out when he heard their supply was limited. “To have a little part of that history to me would be the most meaningful thing," said Ozgener.

As the cigar smoke continues to clear in Rocky Top and fans and players alike come down from the high of victory, it will come time to look ahead to what’s next. As big as the win was for the program, it has now elevated Tennessee to a pedestal among college football’s elite, of which it is so very easy to fall. But for now, the Tennessee-Alabama rivalry will have to wait another year, and once again, the cigars will all come out on the Third Saturday in October.

Read Next: Betting Billions On Sports