Christopher Columbus, the first foreigner to visit Saint-Barthélemy, “discovered” the island in 1493—and then promptly forgot about it. The speck of dry land had no natural resources and for nearly five centuries was considered worthless. It seems incredible today, but it proved such a financial burden that in the late 1800s one-time owner Sweden happily sold back to France the island it had traded for a century earlier.

No one ever found gold, diamonds or oil on Saint-Barthélemy, better known by its nickname St. Barths (pronounced Barts). But today, the island is a hub of affluence, transformed by the riches of tourism. The country’s first hotel, the Eden Rock, opened in 1953 wowing ahead-of-the-curve celebrities such as Howard Hughes and Greta Garbo, who came for a three-night stay but adored her visit so much she didn’t leave for three weeks. At about the same time David Rockefeller fell in love with the untouched natural beauty of its lush green hills, pristine beaches and perfect sailing conditions. He built a hilltop estate, further fueling public curiosity. The billionaires and stars have been coming ever since.

Today, the economy of St. Barths is based entirely on luxury tourism, something it has mastered so well that it is France’s only region, home or overseas, that runs a budget surplus, despite having no taxes. It is to the Caribbean what Monaco is to Europe: small, extremely manageable and focused on the finest lodging and gastronomy. But it enjoys a uniquely laid-back and fairly unpretentious twist on this paradigm. Sure, this is a celebrity playground and there are visitors who casually drop thousands on a bottle of Champagne delivered by a parade of waiters with sparklers and entrance music. You might see a supermodel taking photos on a beach or a spirited tourist dancing atop a restaurant table. But there are no casinos here and, aside from the occasional hotel manager, no one on the island seems to own a blazer, let alone a tie. Despite crystal clear waters filled with super yachts, there are no exotic cars, and the tiny, white-knuckler airport is too small to handle any kind of jet.

What St. Barths serves up in spades is decadent gourmet relaxation and a unique sense of welcome. The island’s “X-factor” is that for a place entirely dependent on tourism, it is remarkably not touristy. There is no social or cultural divide between visitors and locals, and every bar, restaurant, store and beach caters to both. Everyone goes everywhere, mingles, and visitors feel like family members. Even the “local joint” eateries hide in plain sight as the island is simply too small to have hidden gems. Instead, it just has gems, and St. Barths is first and foremost a place to relax in the truest sense, enjoying gourmet meals and fine wines, often with toes in the sand. The finer things are revered in a low-key manner, usually with an ocean view, and as such, it remains one of the most cigar-friendly destinations in the world. 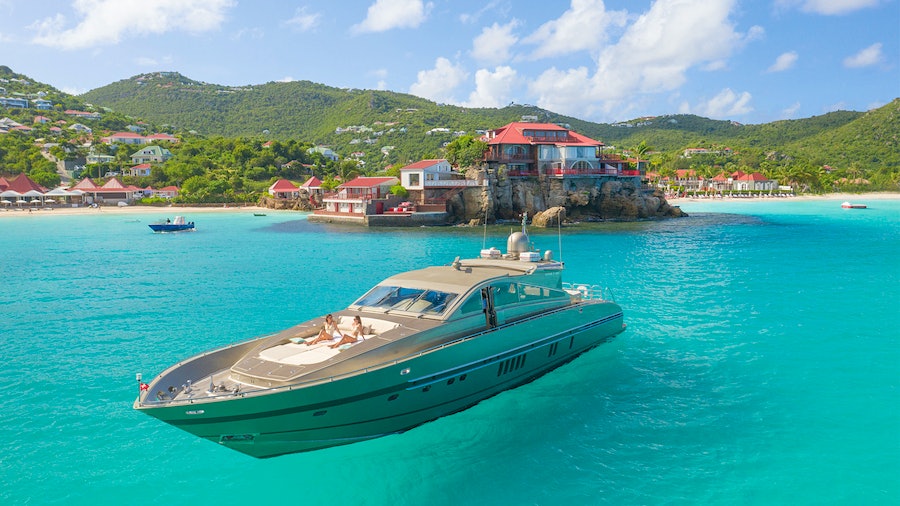 St. Barths is a land of stunning views, endless beaches and tranquil relaxation, as on this yacht floating on the waters off Eden Rock.

Virtually every lodging here, whether a hotel or villa, has some form of outdoor space, and ashtrays and matches on your deck are as standard as shampoo in the bathroom. Likewise, nearly all bars and restaurants have extensive outdoor areas or are entirely open-air and allow smoking. The top hotels have humidors in bars or restaurants, where cigars are embraced as the culture of St. Barths dovetails with a quality smoke. The island has no golf course, no bike rentals, no amusement parks, no sidewalk tour stands pushing dinner cocktail cruises, no museums, not even a movie theater. The chief activity is dining and relaxing and, with the exception of watersports and yoga, there are virtually no active pursuits.

But there are multiple well-stocked cigar shops, including a Casa del Habano just steps away from the beach in Saint-Jean (see sidebar, page 58) and a cigar bar in the capital of Gustavia called Rhum Room with more than 700 kinds of rum. In an interesting twist, when it comes to tobacco and spirits St. Barths is a bargain hunter’s dream, truly surprising as this island is considerably expensive for everything else. Centuries ago, the Swedes declared the island a “free port,” and it has remained one since, with no duties, import, export, VAT or sales taxes. So, while lodging and dining is extremely expensive, Cuban cigars and fine agricole rums are steals—so long as you are buying in a retail shop, rather than a restaurant or bar.

Other than choosing what to smoke and drink, the toughest decisions when planning a trip to St. Barths are where to stay and where to eat, but it is nearly impossible to go too far wrong on either count. There are less than 30 hotel or cottage accommodations on the island, none of them budget oriented, and 10 rate five-stars or higher on the French national system. The top resorts are truly top tier and so intimate that the largest, the Rosewood Le Guanahani, would still be “boutique” anyplace else, with just 66 rooms and suites. The average hotel has less than 20 rooms and, due to 2017’s Hurricane Irma, arguably the worst to ever hit the island, much of the lodging here has been rebuilt.

But even among the excellent array, there are some standouts. Le Sereno is a sister hotel to the luxury outpost on Italy’s Lake Como with the same name and it brings a unique spirit of the Mediterranean to the thoroughly French island, down to the prosciutto di Parma served alongside croissants and baguettes at breakfast. The Italian hotel closes for winter, so in peak season St. Barths gets its staff, including the Michelin-starred chef. The restaurant’s bar has a custom humidor, a miniature of the hotel, and the curated retail boutique devotes nearly as much room to high-end humidors, cutters and lighters as Italian linens. With just 39 rooms and three villas, Le Sereno sits on one of the best and least crowded swimmable beaches: Grand Cul de Sac, which it shares with nearby Le Barthélemy and Le Guanahani.

The first hotelier to arrive naturally chose the most prime location on the island. The Eden Rock occupies a stunning rocky peninsula jutting into the Caribbean at one end of large, crescent-shaped St. Jean Beach, the island’s busiest. At the very tip of the promontory, the Eden Rock is impossible to miss, with its distinctive red roofs, an imposing two-story main building and wave-kissed waterfront suites. Most other rooms are in terraced red-roof cottages cascading down either side of the point. Several have private pools, and there is an exclusive beach club hidden in a natural alcove. It’s a superb hotel and, unlike most of its competition, is within a short walk of attractions, in this case, the charming town of Saint-Jean, which is full of great shops. The Eden Rock also offers a wonderful choice for lunch: Sand Bar by Jean-Georges, with tables right against the beach. Diners sometimes finish a meal, walk into the water and enjoy the gentle waves.

The Eden Rock is next door to Nikki Beach, one of the world’s most famous sandy “day clubs,” a lunch-only restaurant known for its deejay, fashion shows and occasional dancing on the tables. It also has a serious wine list, with such treasures as Petrus and Domaine Romanée Conti, not to mention oversized formats of prestige Champagnes. This is a high-energy spot but the food is unfailingly good, from pizza with truffles to some of the island’s best sushi. With the exception of the hidden underground VIP wine room, Nikki Beach is open air. It boasts a humidor, and after lunch ask for an ashtray and linger to watch the scene.

For a more serene experience, look to Cheval Blanc, the sole luxury resort on Flamands Beach, one of the island’s longest and widest, with rooms laid out along wooden boardwalks through jungle-like palms, giving it a secluded, escapist and tropical feel.  It has more amenities than other resorts here, with multiple retail shops, a large gym and spa, tiki bar and two restaurants, La Case and La Cabane. The latter is an impossibly charming beach spot, with half its tables on the sand. After your meal, choose a cigar from the personalized Elie Bleu humidor. 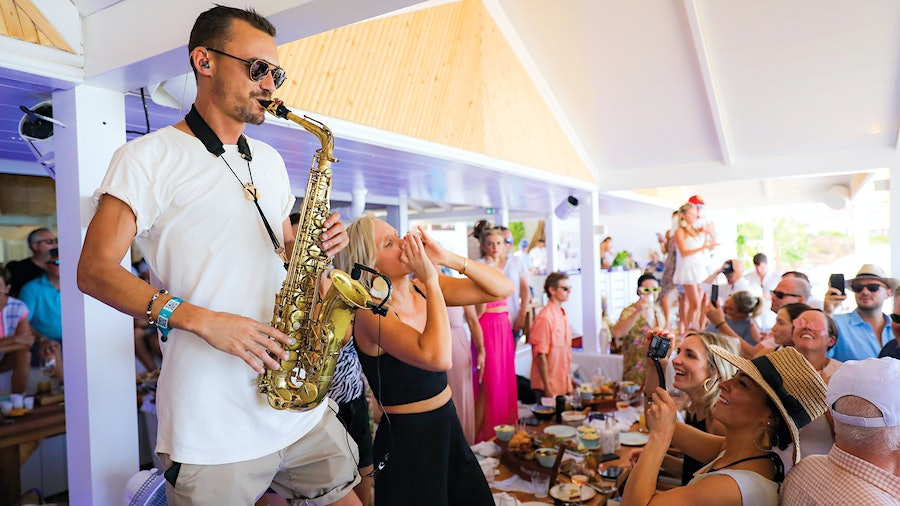 Lunch at cigar-friendly Nikki Beach is always a party, with fashion shows and music.

The Christopher is considered the most affordable of the high-end St. Barths hotels, a relative concept on an island where shoulder season rooms begin in the four figures and in winter it is hard to ever find anything less than $2,000 a night. It lacks a beach—its major drawback—but makes up for it with two restaurants, a large pool complex, humidor, three villas and one of the best spas on the island.

The unstuffy Manapany is another high-end outlier, a relaxed thatched-roof-style eco resort hidden on Anse des Cayes beach, such a hidden gem that it is not on most tourist lists of island beaches. Nine of the 43 rooms sit directly on the beach.

There’s not a bad looking stretch of sand on St. Barths. At the opposite end of the spectrum from buzzy Saint-Jean Beach are Saline and Columbier Beaches, generally the least-visited on the island as neither has facilities and both can be reached only on foot—but they are worth the journey. The walk to Saline is just a few minutes from the parking area through the dunes, while Columbier requires either a steep path or a more circuitous hike of 20 to 30 minutes. Gouverneur Beach is also fairly quiet and it too is lacking facilities, but it boasts easy access and parking.

There are only about 500 hotel rooms on St. Barths but the roughly 800 luxury rental villas the island is famous for comprise five times as many bedrooms. These cost as much, or more, than most hotels and run the gamut from cottages to mansions. Almost all have private pools and the most lavish come fully staffed. Since the hurricane, the new trend has been villas at the full-service resorts, which offer the best of both worlds.

Eating out is the number one activity on the island, and true to its connection to France, dining is taken very seriously. You can dine beautifully at the top hotels, but there are also many independent standouts, almost entirely French or French fusion. (Oddly there is almost no “Caribbean” cuisine to be found.) Two beloved local favorites are Bonito (French/Peruvian) and Orega (French/Japanese). There is also an outpost of Atelier Joël Robuchon; La Petite Plage, a sister property to the St. Tropez gem of the same name; L’Esprit de Jean Claude Dufour and Tamarin, a beautiful garden spot in Saline.

There are no chain restaurants here, but you can still eat casual. Chez Rolande, near Flamands Beach, looks like a shack. Fish Corner is a new local favorite in Gustavia serving fish tacos. And  there is always the divey burger joint Le Select, said to have inspired Jimmy Buffett to write “Cheeseburger in Paradise.” Buffett, a man legendary for his ability to relax, is a St. Barths regular. A trip to this unforgettable island might have you following in Buffett’s sandals—and planning your return.