Share
The Rocky Patel ALR, which stands for Aged, Limited and Rare, has been reblended and repackaged for 2019.

The annual IPCPR trade show (now called PCA) is the only time of year where so much of the premium cigar industry is gathered in a single room. Most companies are there to show off new releases, some of which are quite interesting.

After attending the show and surveying booth after booth of new and upcoming cigars, we highlighted the products we thought were the most intriguing in concept, style and blend. Some are shipping as you read this. Others won’t make it to your local cigar shops until the end of the summer and a few won’t go out until the fall.

Regardless of the time frame, the second half of 2019 will be full of creative collaborations, limited editions, anniversary smokes and vibrant blends for every palate and price point. 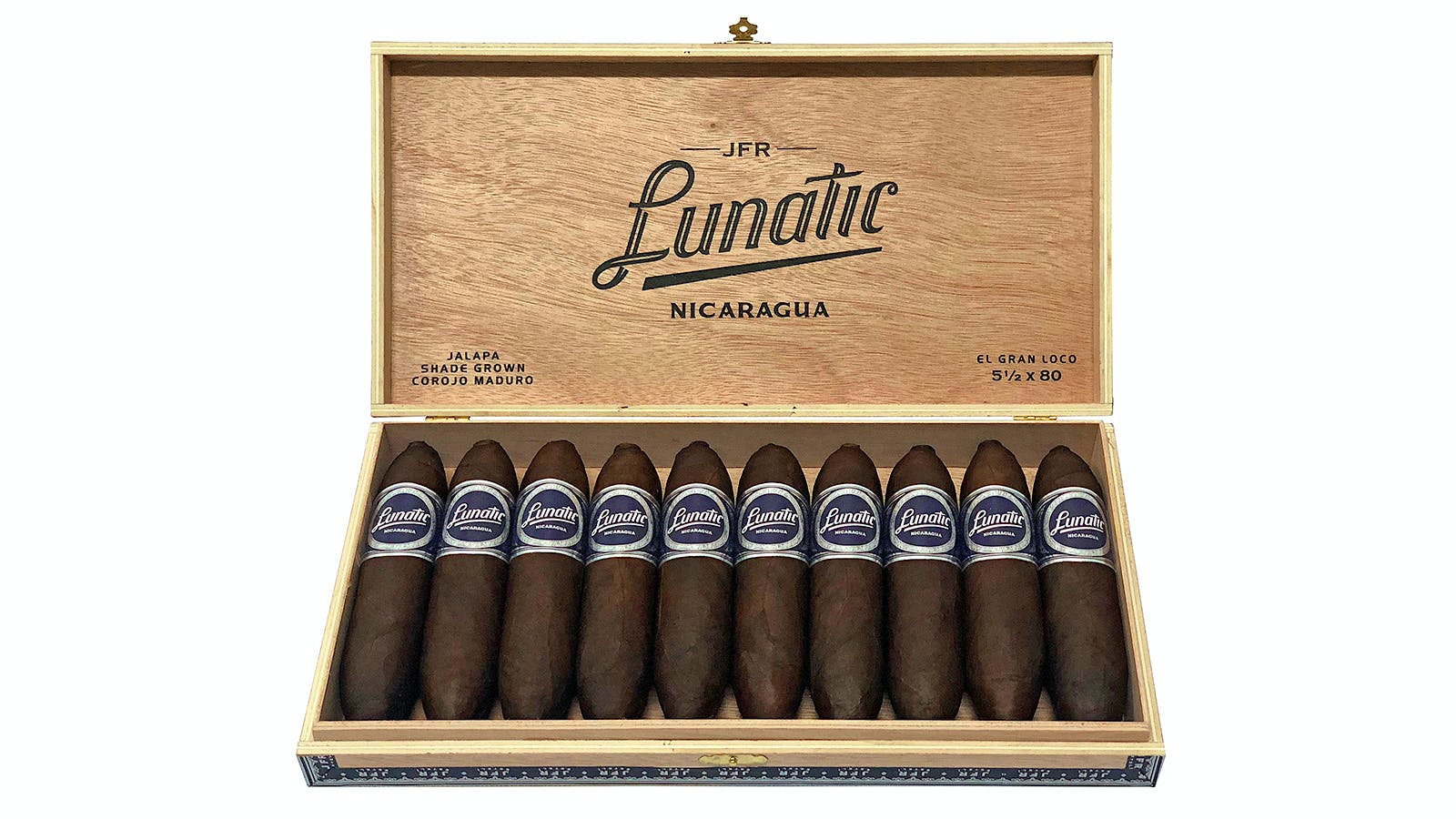 The JFR Lunatic Loco is a series of fat perfectos that could be considered a sub-brand of a sub-brand. First came JFR. Then JFR Lunatic. And now, the Loco, which is composed of Nicaraguan tobacco grown by Aganorsa’s agricultural arm. The cigars are made in the factory of the same name and come in three short, stout sizes: El Loquito, measuring 4 3/4 by 60; El Loco, 4 3/4 by 70; and El Gran Loco, 5 1/2 by an incredibly fat 80. Lunatic Loco will come packed in 10-count boxes, and range in price from $8.70 to $9.99. 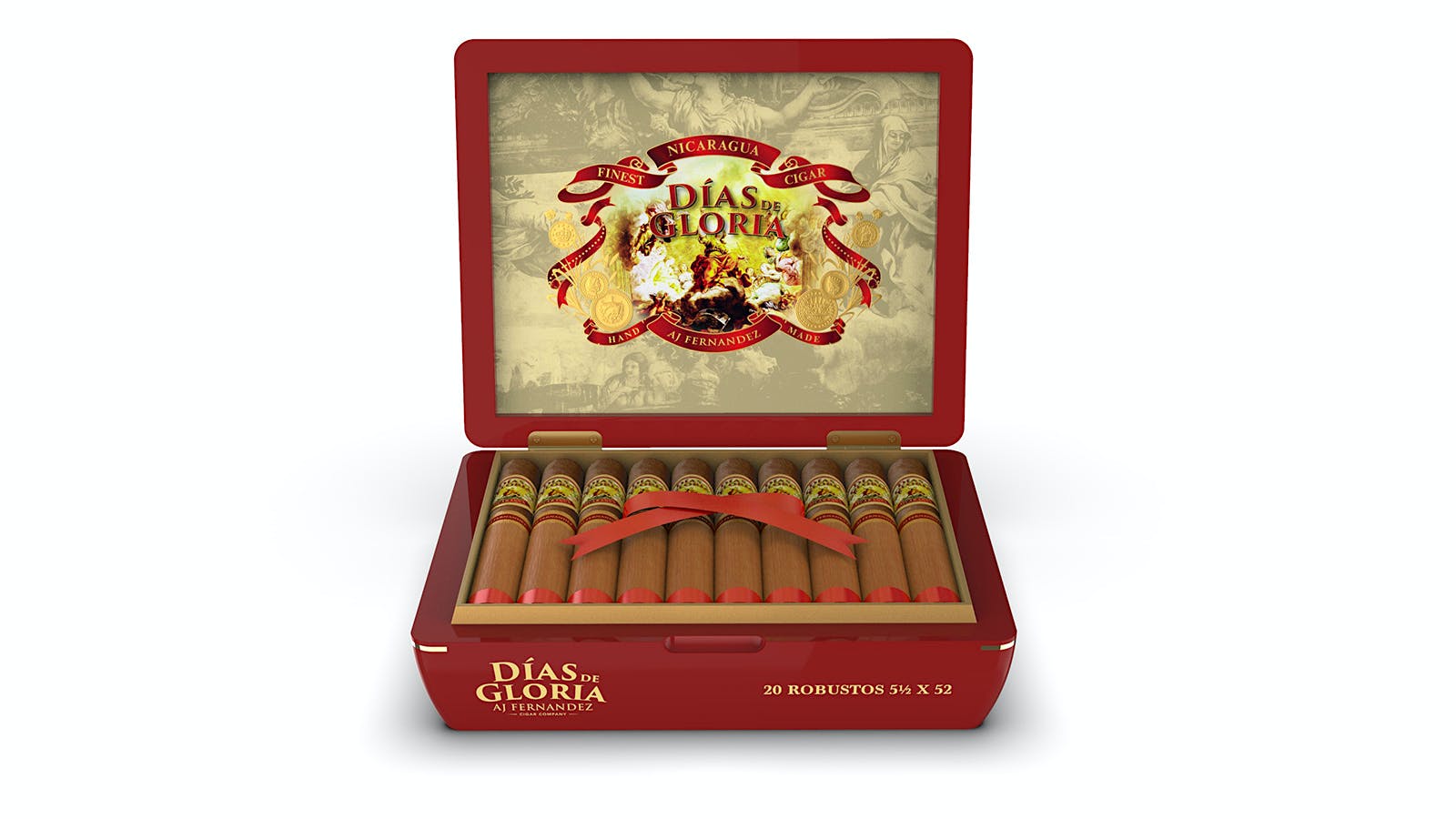 Días de Gloria, or “days of glory,” is a nod to the romanticized period in Cuba’s history before the Revolution, although the new cigar contains no Cuban leaf. Rather, it’s made up of tobacco from four of Fernandez’s oldest farms in Nicaragua and comes in four sizes: Short Churchill, 6 1/2 by 48; Robusto, 5 1/2 by 52; Toro, 6 by 56; and Gordo, 6 by 58. The cigars retail from $9 to $12, respectively.

The young Rubin brothers have teamed up with cigar veteran Ernesto Perez-Carrillo for a project dubbed the Alec Bradley Gatekeeper. It’s a follow-up to last year’s Blind Faith brand and is a combination of Ecuador Habano wrapper, Nicaraguan binder and filler from Nicaragua and the Dominican Republic. Made at Perez-Carrillo’s factory in the Dominican Republic, the Gatekeeper comes in four sizes: Corona, 5 1/8 by 42; Robusto, 5 by 50; Toro, 6 by 52; and Gordo, 6 by 60. The line will retail from $8.75 to $12. 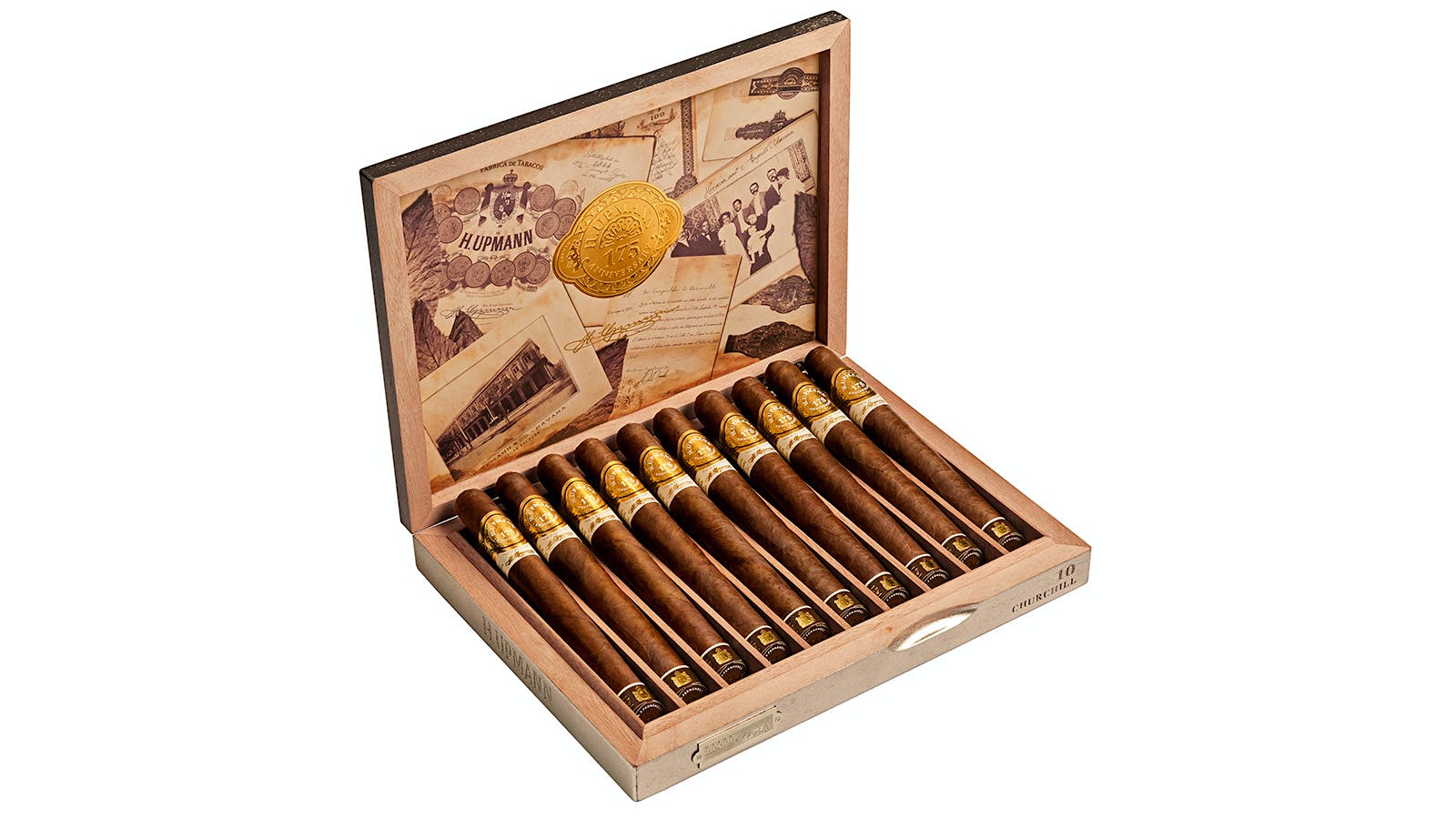 The H. Upmann brand turns 175 this year and Altadis is celebrating with the H. Upmann 175 Anniversary Limited Edition (pictured above). Made by A.J. Fernandez, the commemorative cigar is made entirely from Nicaraguan tobacco grown on Fernandez’s farms. The hallmark is a medio tiempo wrapper. The $18 cigar measures 7 by 50 and is made in Nicaragua.

The Trinidad Espiritu is a collaboration between Fernandez and Rafael Nodal, head of product capability for Tabacalera USA. Composed of only Nicaraguan tobacco, Espiritu marks the first time that Fernandez has ever blended a Trinidad, and comes in four sizes: Robusto, at 5 inches by 52 ring gauge; Belicoso, 6 1/8 by 52; Toro, 6 by 52; and Magnum, 6 by 60. 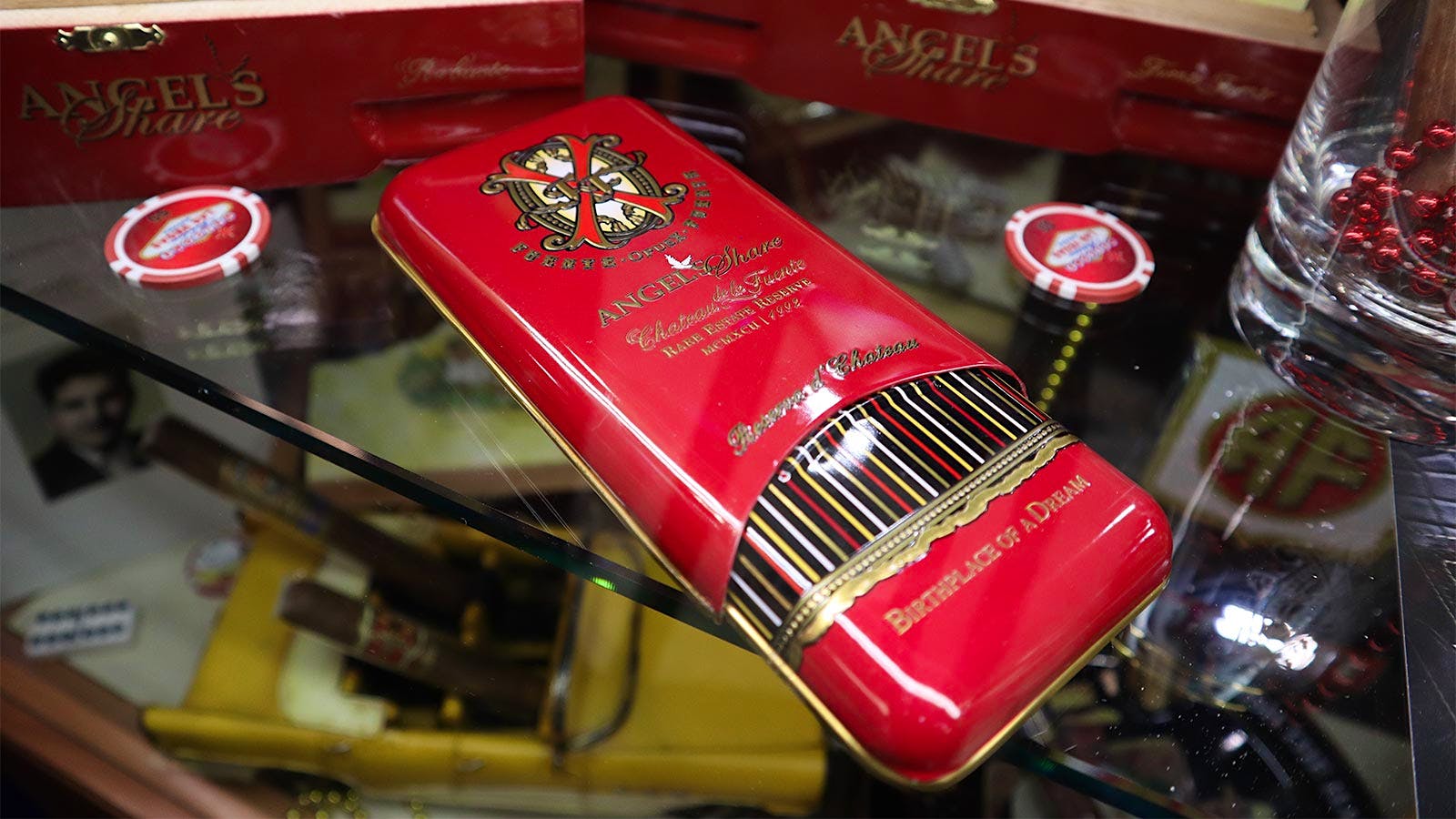 Fuente is packaging three sizes from its Fuente Fuente OpusX Angel’s Share cigar line in these red, glossy tins: Reserva D'Chateau, PerfecXionX and Robusto. Angel’s Share is a bit milder than the core OpusX line, as these cigars are made with older wrappers taken from the middle of the tobacco plant as opposed to the higher-priming leaves that grow near the top. The wrapper is grown in the Dominican Republic at Chateau de la Fuente. 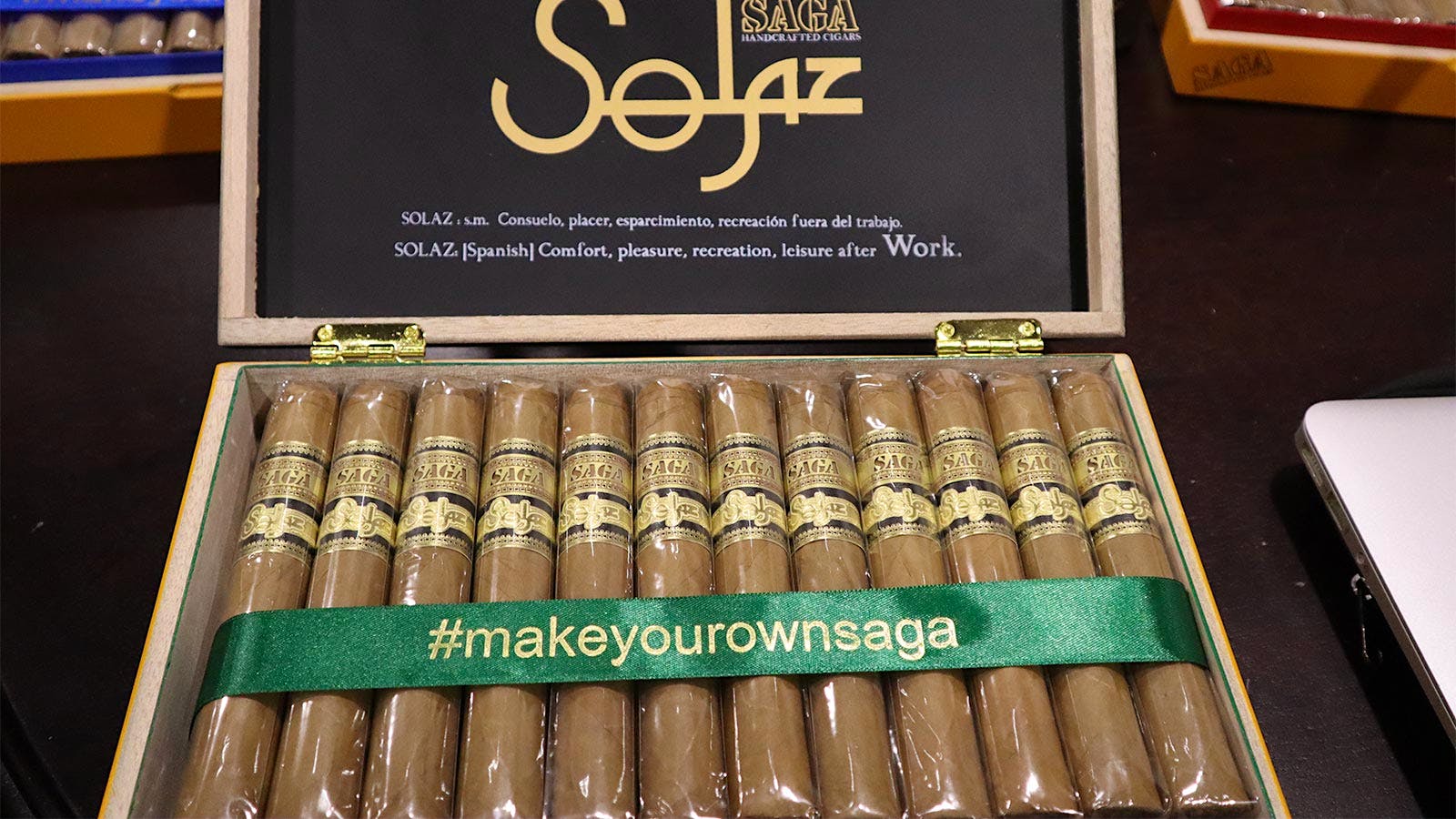 In Spanish, the word solaz means solace, or comfort. But Solaz is also the new brand from De Los Reyes that comes in a light, Ecuador Connecticut wrapper with a Dominican binder and filler. Retailing from $8.30 to $9.50, Solaz is offered in three sizes: Robusto, 5 by 50; Churchill, 7 by 48; and Gordo, 6 by 58. 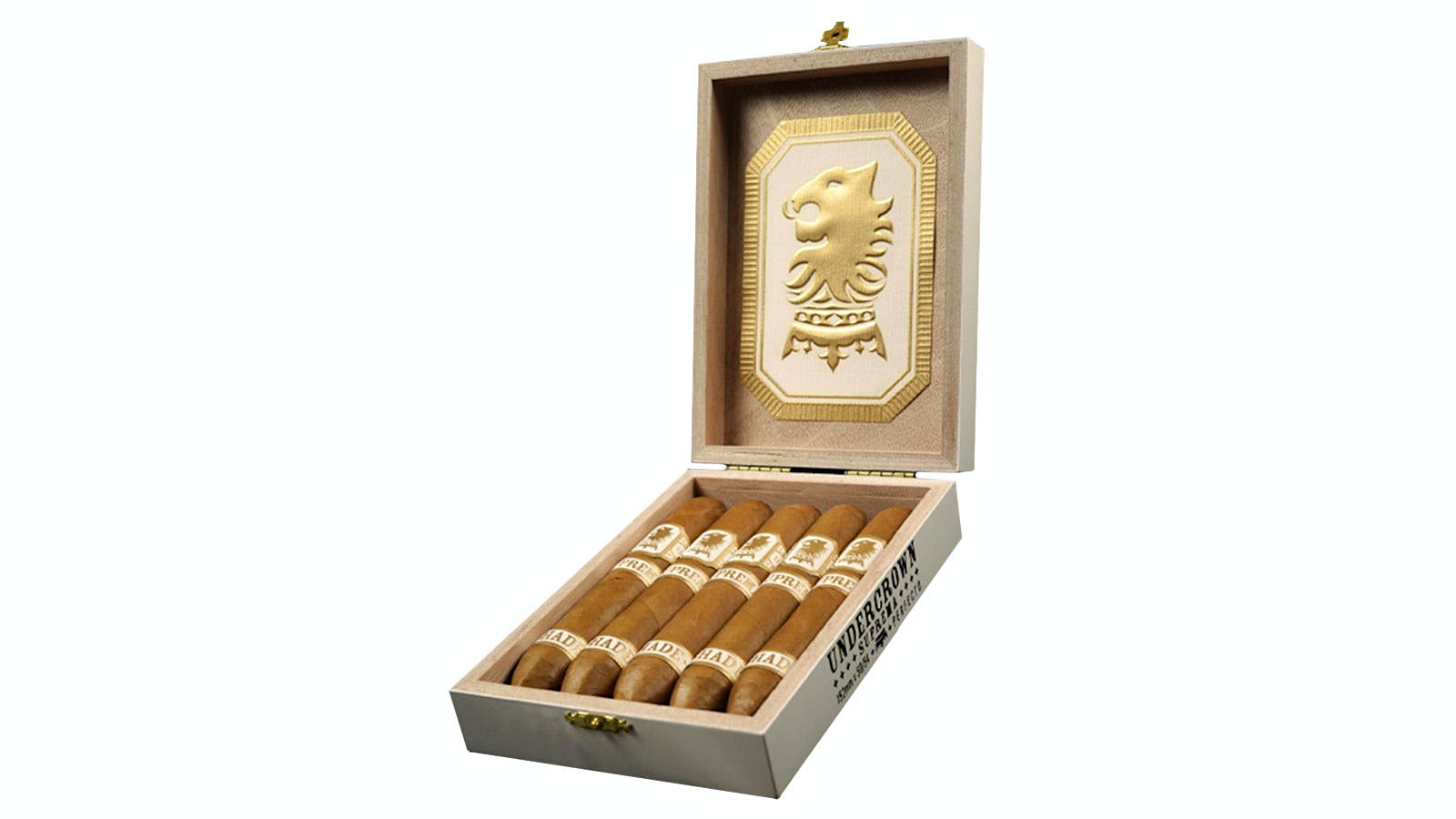 The Undercrown Shade Suprema from Drew Estate is a 6 by 54 perfecto that will retail for $9.60. It’s the same blend as the other sizes in the Undercrown Shade line: an Ecuador Connecticut wrapper, Ecuador Sumatra binder and a filler mix of Dominican Criollo ’98, Nicaraguan Corojo and Criollo tobaccos. 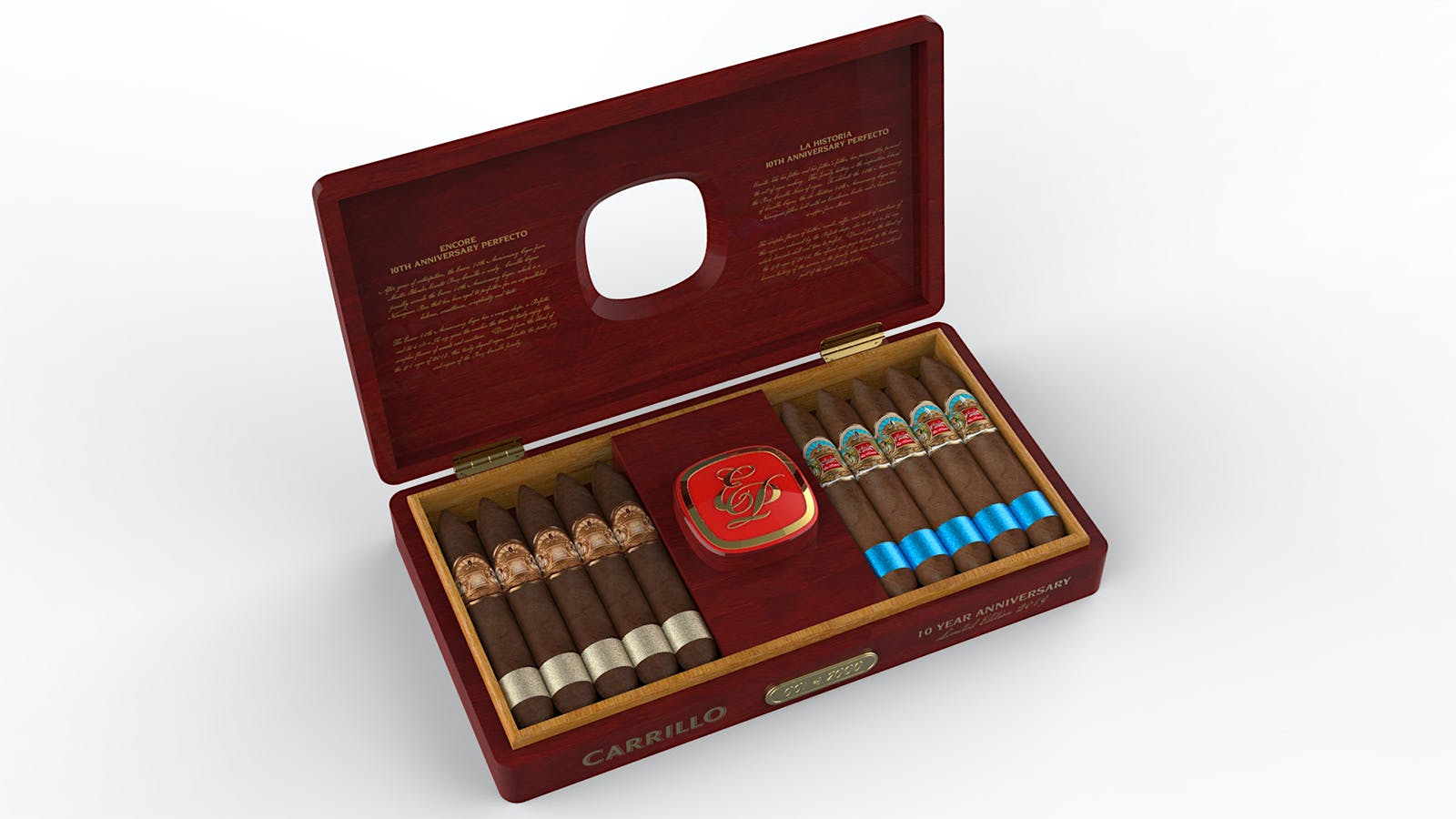 Ernesto Perez-Carrillo is making two new sizes of his two highest-rated blends into a box-pressed double figurado that measures 6 1/2 inches by 56 ring gauge: La Historia (No. 2 cigar of 2014) and Encore (2018 Cigar of the year). They will be packaged together in a commemorative box and retail for $20 each. 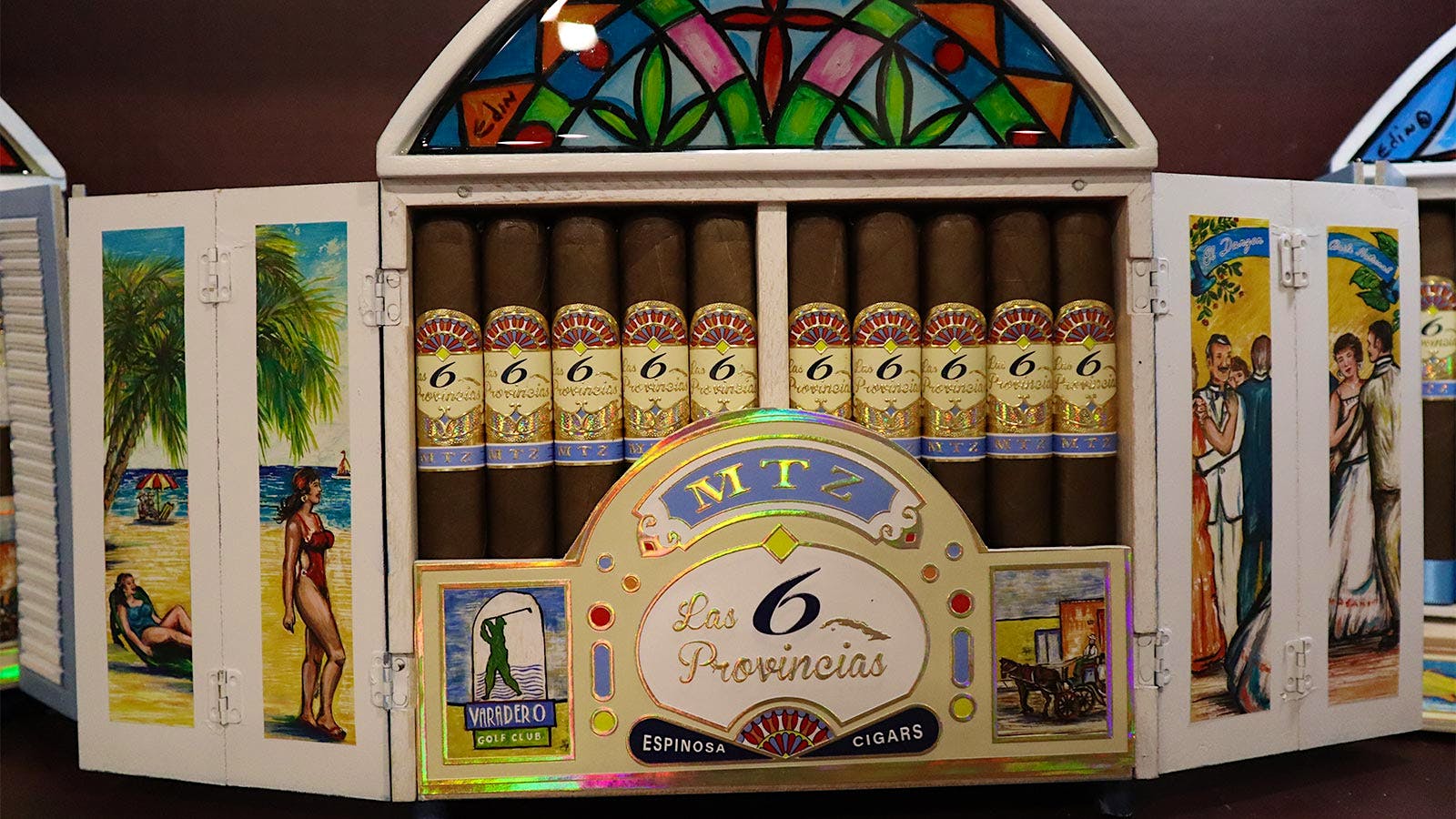 A follow-up to last year’s Las 6 Provincias, this year’s release comes in a new ornate package that also pays homage to Old Havana. The limited-edition smokes measure 6 by 52 and retail for $16.50 each. All the tobacco is from Nicaragua and the cigars are made at San Lotano, A.J. Fernandez’s second factory in Ocotal, Nicaragua.

Foundation is adding a slim new Lancero size to its Tabernacle Havana Seed CT #142 brand. It’s the fifth vitola in the Havana Seed #142 lineup. At 7 by 40, the cigar is rolled with a dark, Cuban-seed wrapper grown in Connecticut. Underneath lies a Mexican San Andrés binder and filler tobacco from Nicaragua’s Estelí and Jalapa regions, as well as Honduran tobacco from Jamastran. The Lanceros retail for $12.75 each. 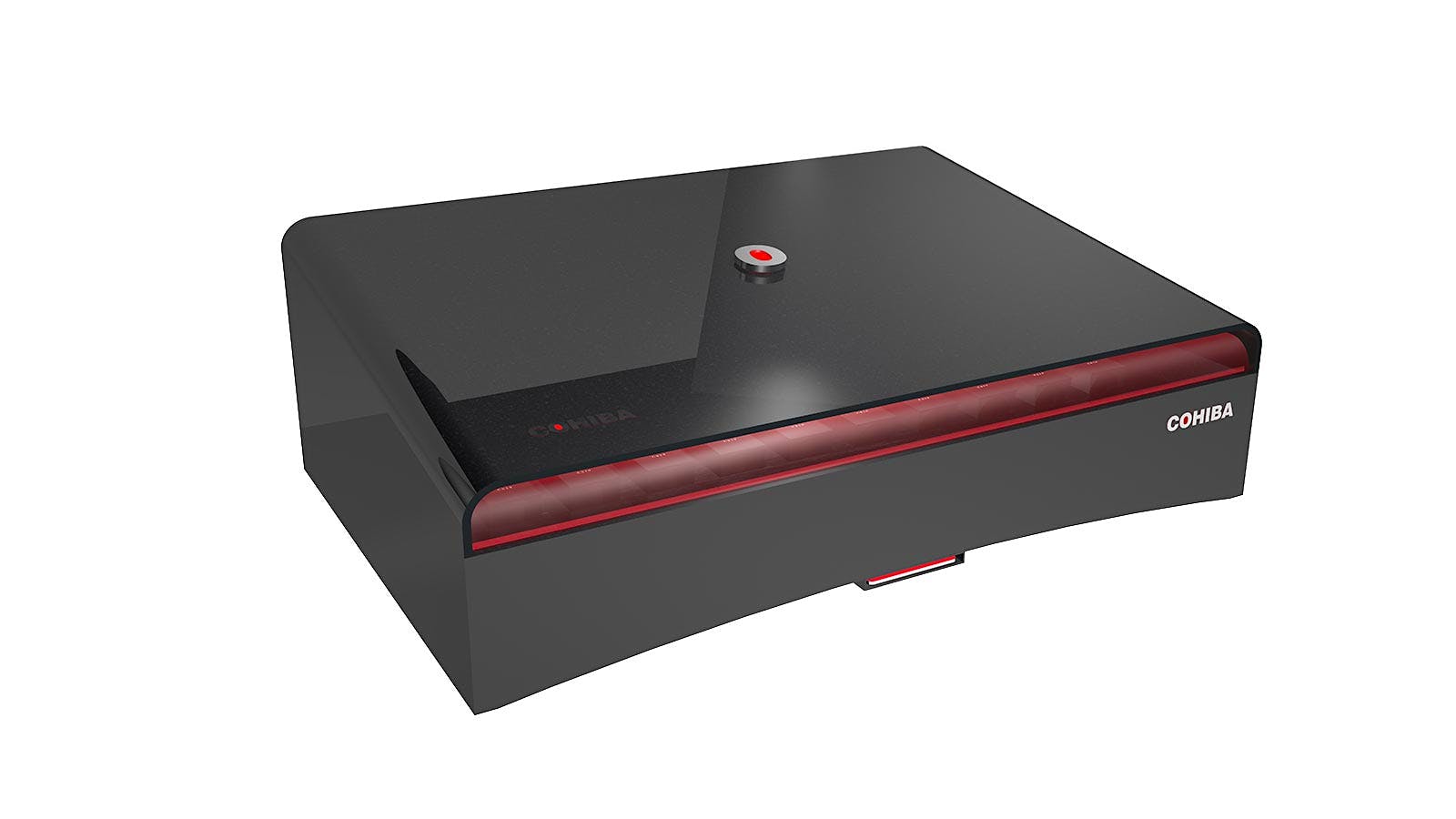 General showcased the most expensive cigar of the trade show—again. At $90 per cigar, this is the second year that the Cohiba Spectre (pictured above) makes an appearance, this time with new packaging. It measures 6 by 49 and consists of a Nicaraguan wrapper, broadleaf binder and a filler of Nicaraguan tobacco finished in sherry casks. There’s a bit of Brazilian Mata Fina in the filler as well.

The Macanudo Heritage Nuevo is a limited-edition cigar with an Ecuadoran Connecticut wrapper. It’s the first time that a Macanudo from the Café series has ever been wrapped in a Connecticut seed cover leaf from Ecuador and it will come in three sizes: Robusto, 5 by 50 ($12.99), Toro 6 by 52 (13.99) and Churchill, 7 by 50 ($14.99).

The Illusione Singulare 2019 is a limited-edition diadema measuring 6 3/4 inches by 52 ring and contains only Nicaraguan tobacco. It’s produced at the Aganorsa Leaf factory and retails for $15. 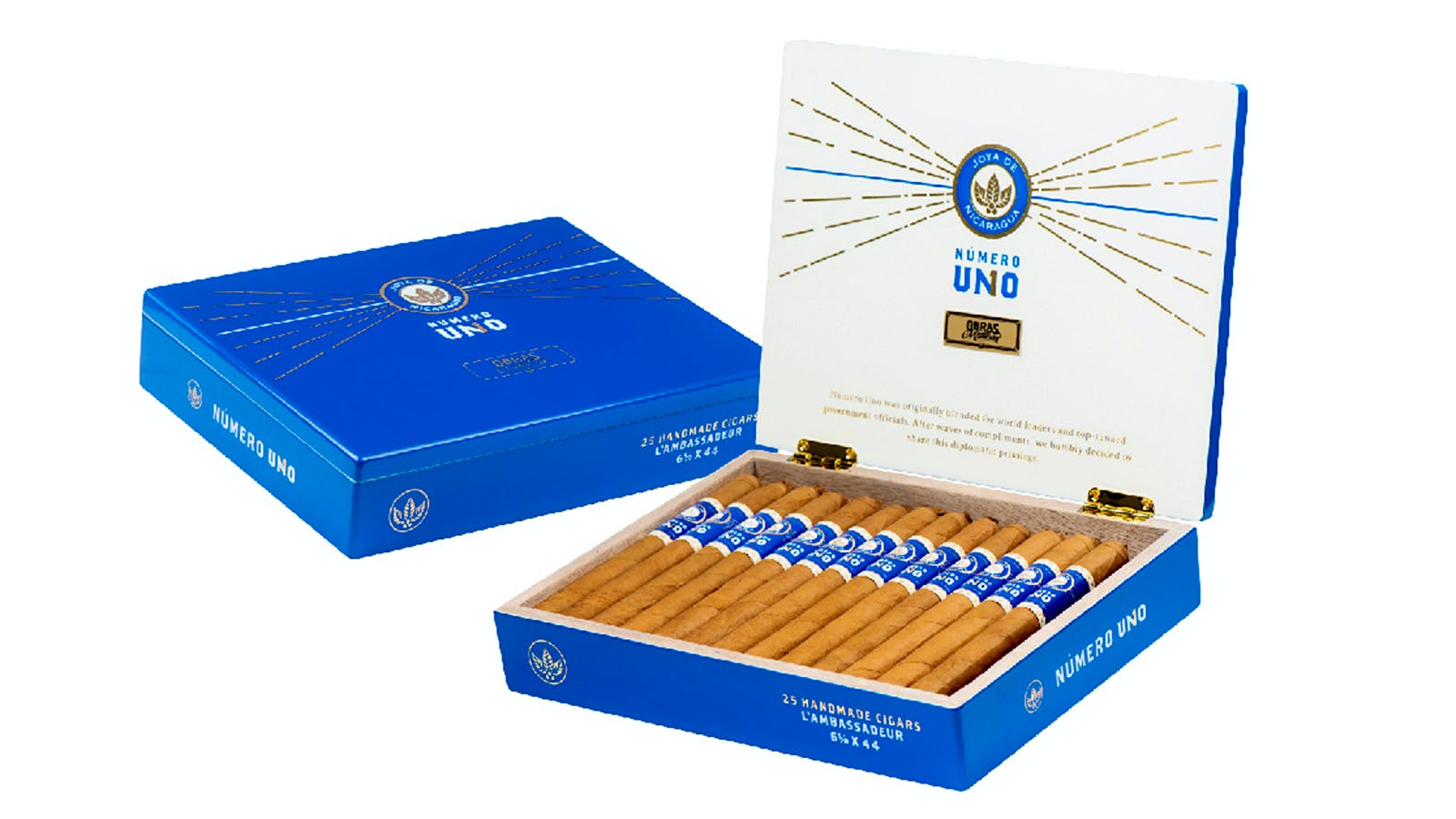 What was once a diplomatic gift from Nicaragua given only to world leaders will soon be a cigar anyone can purchase for $15. The Número Uno L’Ambassadeur is now available on a limited basis (only 1,500 boxes made). It’s a 6 5/8 by 44 lonsdale with a fantail cap and Ecuadoran Connecticut wrapper.

La Flor celebrates 25 years in business with a limited-edition called La Flor Dominicana 25th Anniversary. The new $25 cigar comes in a 7 by 52 parejo, and is rolled with a Corojo wrapper grown in Ecuador along with binder and filler tobaccos from Gomez’s farms in the Dominican Republic. 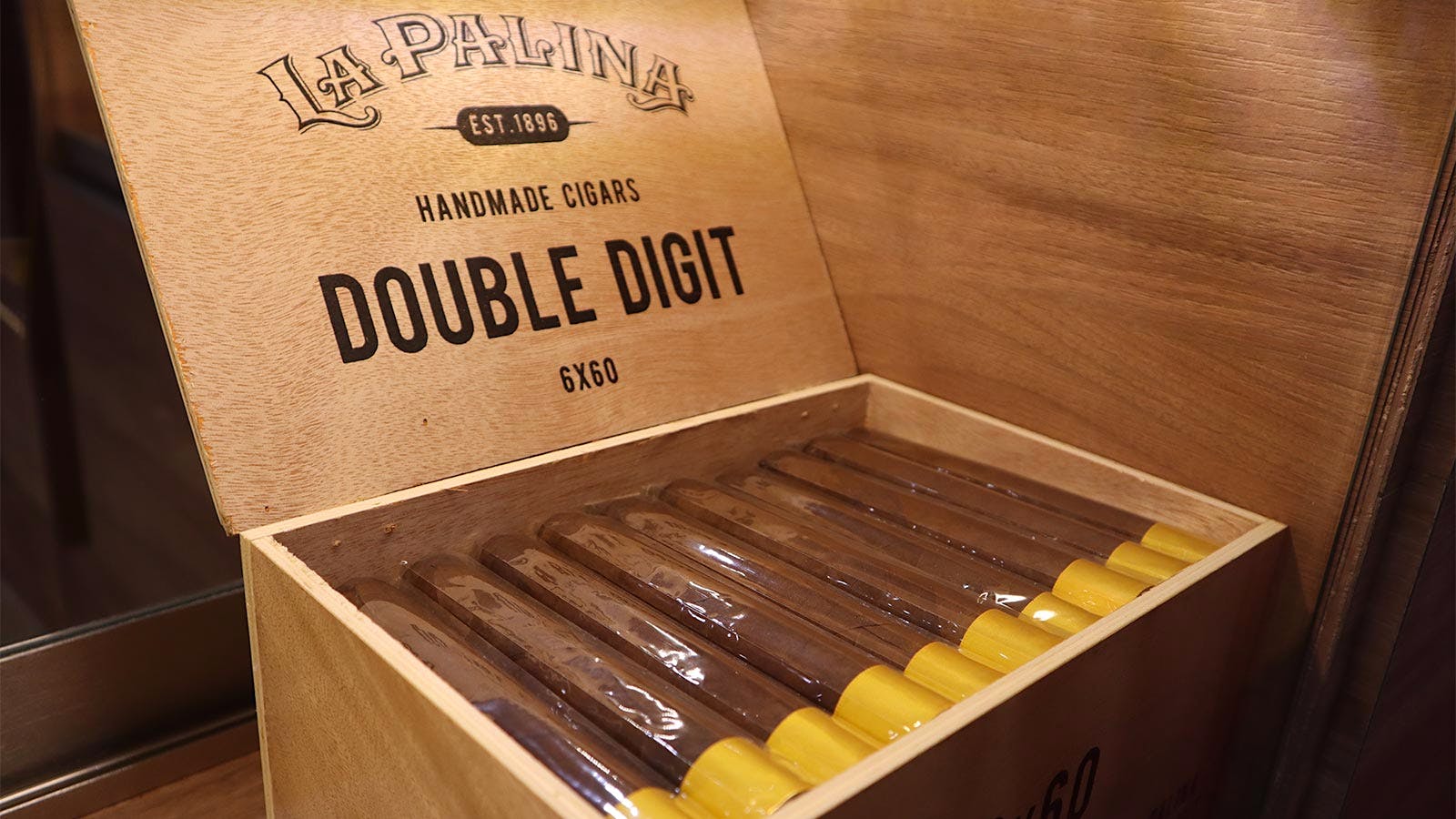 In stark contrast to some of its pricey smokes that can cost more than $20, La Palina has gone the other way with a value-oriented cigar called The Double Digit, a 6 by 60 that comes in 50-count cabinets and retails for $6.99 each. It’s covered in an Ecuadoran wrapper and blended with Dominican and Nicaraguan tobacco, as well as another tobacco of undisclosed origin. 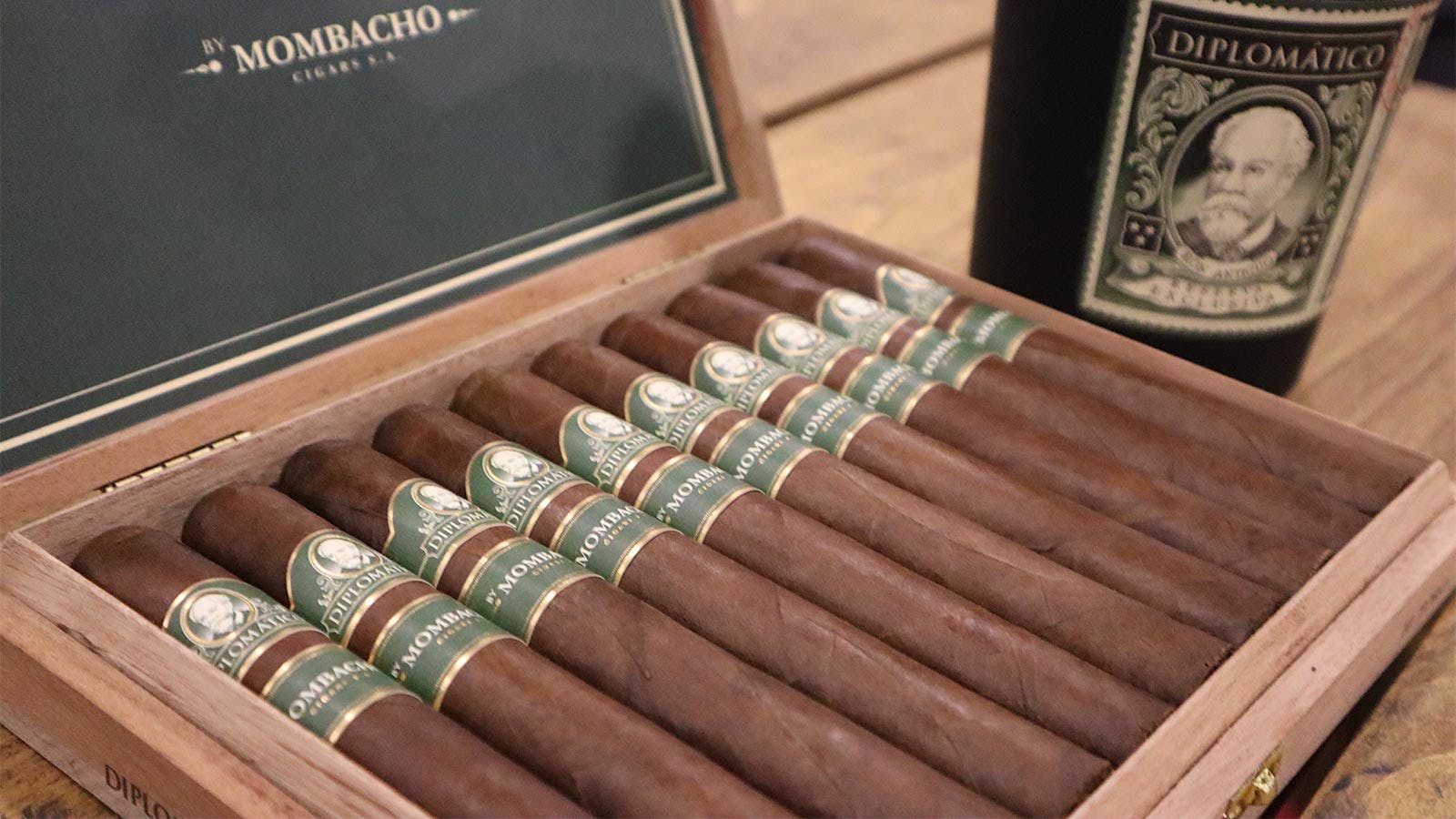 Mombacho has teamed up with Diplomatico rum and created a cigar intended for puffing and sipping. The Mombacho Diplomatico comes in Petit Corona, Robusto and Toro with retail prices from $9.95 to $14.95. All the tobacco is Nicaraguan, save for the silky Ecuadoran Habano wrapper. 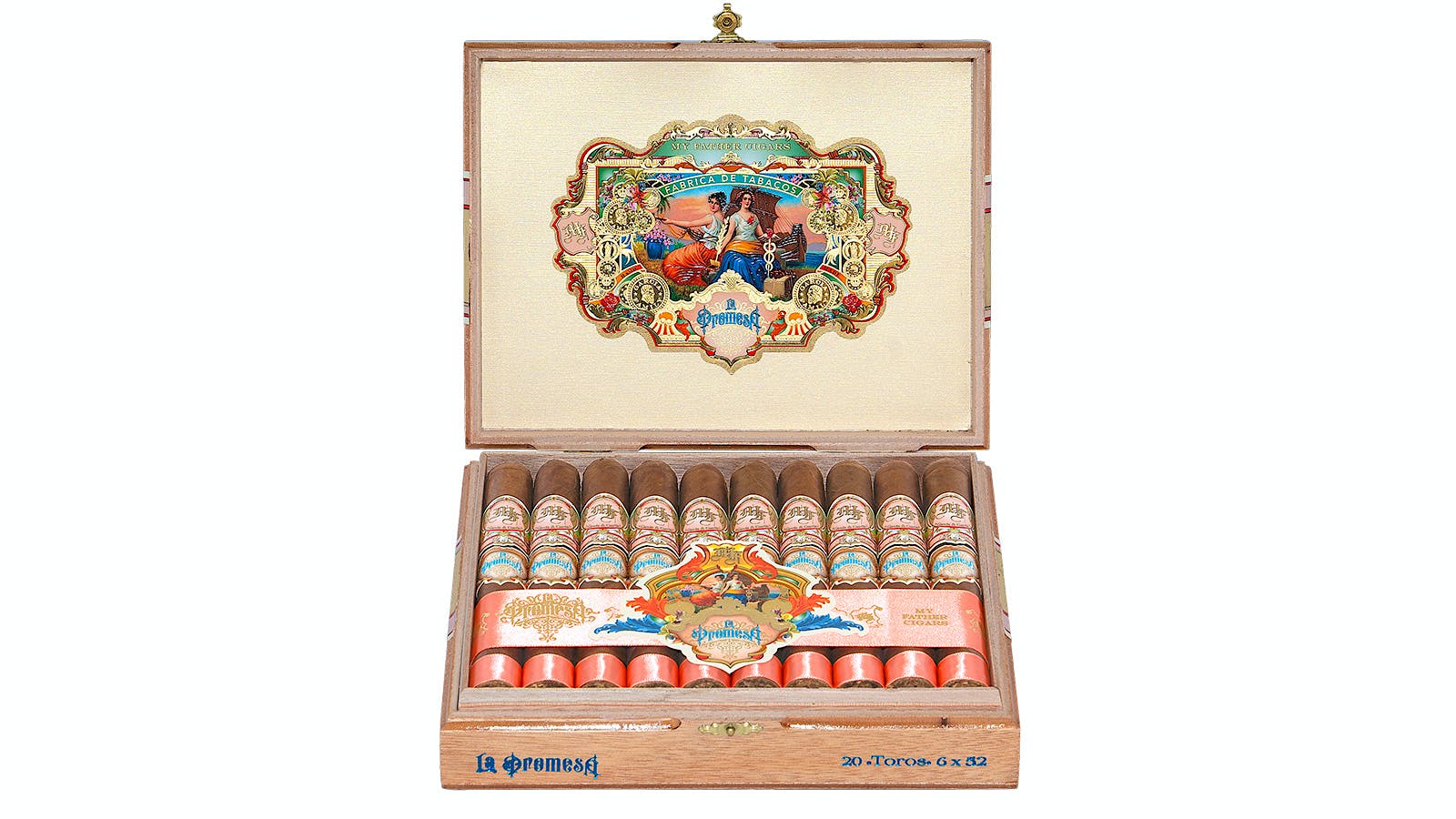 This year’s new brand might be the most personal of all the releases from My Father. Meaning “the promise,” La Promesa refers to a promise that company patriarch José “Pepin” Garcia made to honor his family’s tobacco heritage and to be successful in the tobacco industry after he left Cuba. The blend of Ecuadoran wrapper atop Nicaraguan tobacco—all of which was grown on the Garcia family farms—represents the fulfillment of this promise. My Father La Promesa comes in five sizes: Robusto Grande, 5 1/2 by 54; Toro, 6 by 52; Lancero, 7 1/2 by 38; Petite, 4 1/2 by 50; and Corona Gorda, 5 1/2 by 48. They range in price from $7.80 to $10. 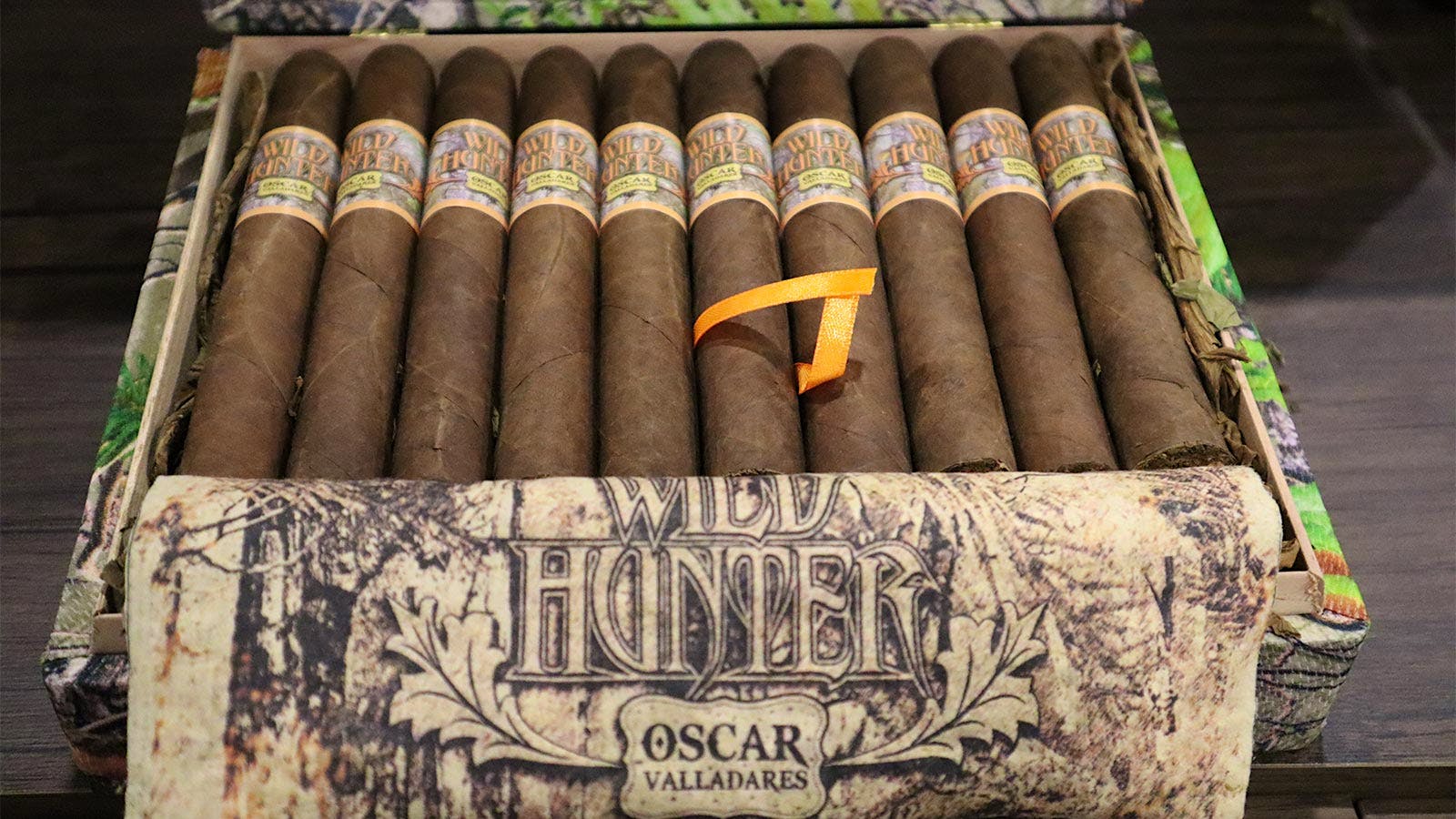 There weren’t too many new Honduran puros at the show, but The Wild Hunter consists of only Honduran tobacco and is made in Honduras by Oscar Valladares. Packaged in camouflaged boxes of 20, the cigars come in one size, a 6 by 52 Toro that retails for $9.50. It’s offered in a natural or oscuro wrapper. 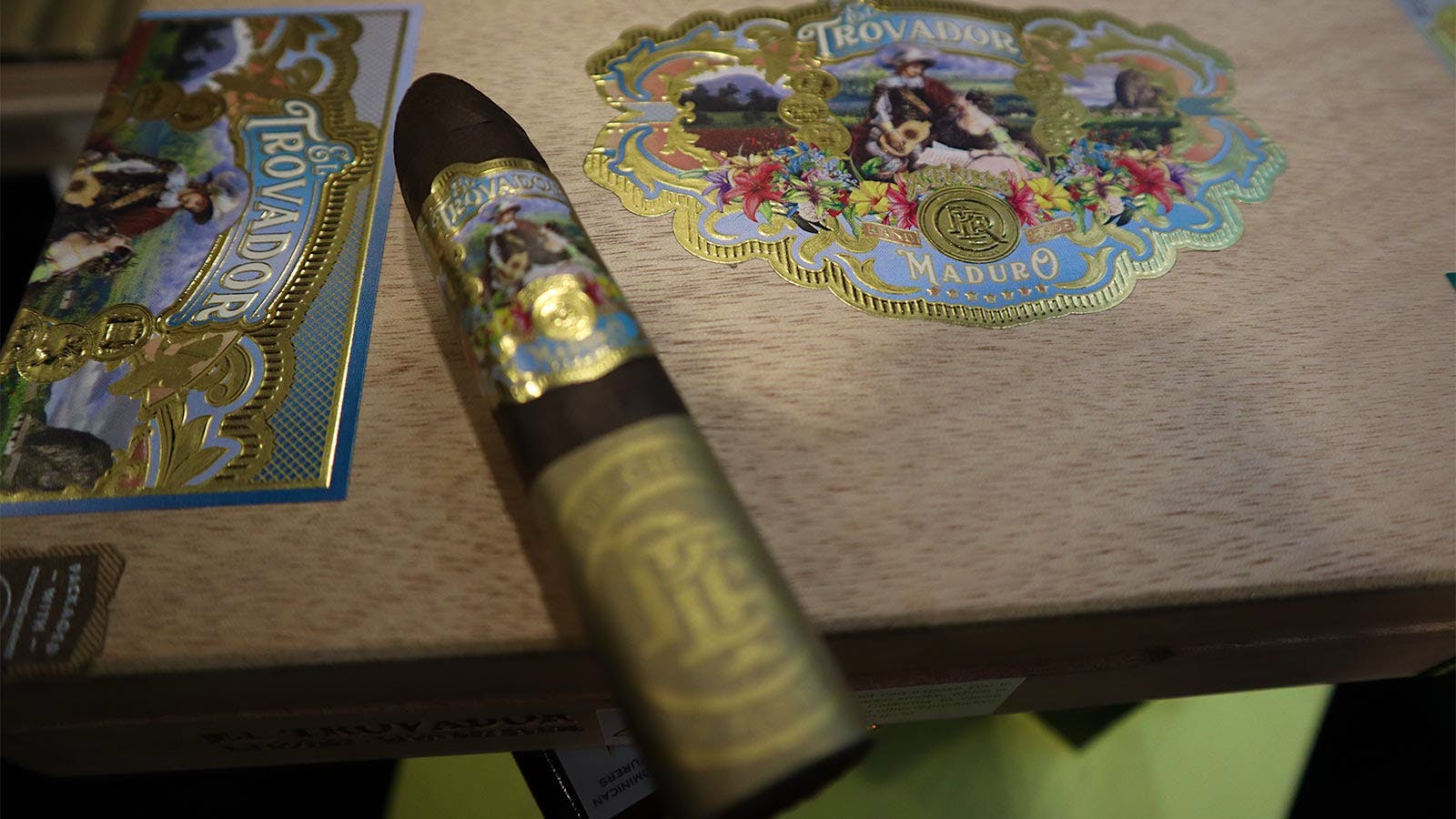 While El Trovador isn’t a new cigar, its packaging has been completely changed from the simple brown band and plain wooden box to a more ornate presentation reminiscent of vintage Cuban branding and old stone lithography. El Trovador is made in the Dominican Republic and comes in two wrapper options: Rosado or Maduro.

Consider the Plasencia Alma del Fuego to be Nestor Andrés Plasencia’s love letter to Ometepe, a volcanic island in Nicaragua that produces distinct tobacco. While the wrapper is from the Jalapa region of Nicaragua, one of the two binders is from Ometepe, as well as half the filler. All the tobacco was grown by the Plasencia family in Nicaragua. Alma del Fuego comes in three sizes: Candente, measuring 5 by 50 ($15); Concepción, at 6 by 54 ($16); and Flama, a 6 1/2 by 38 panetela with a retail price of $17. 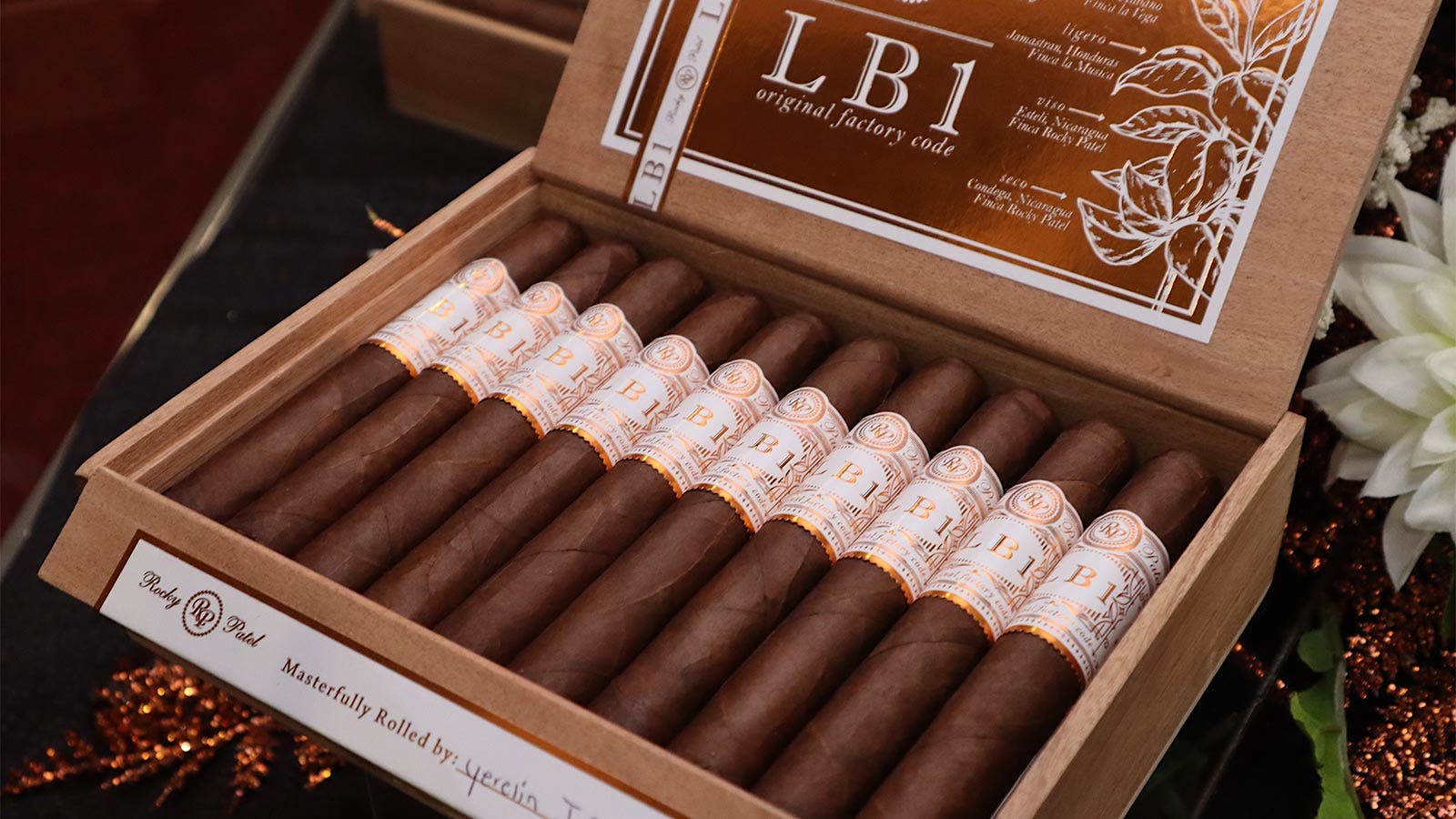 The Rocky Patel ALR stands for Aged, Limited and Rare. According to the company, the cigars in this line have been aged for two years after rolling. It comes in three box-pressed sizes: a Robusto, Toro and Sixty retailing for $13, $14 and $15, respectively. All come in a Mexican San Andrés wrapper and are made in Nicaragua at the TaviCusa factory. Although an earlier version came out in 2018, this new blend is completely different. 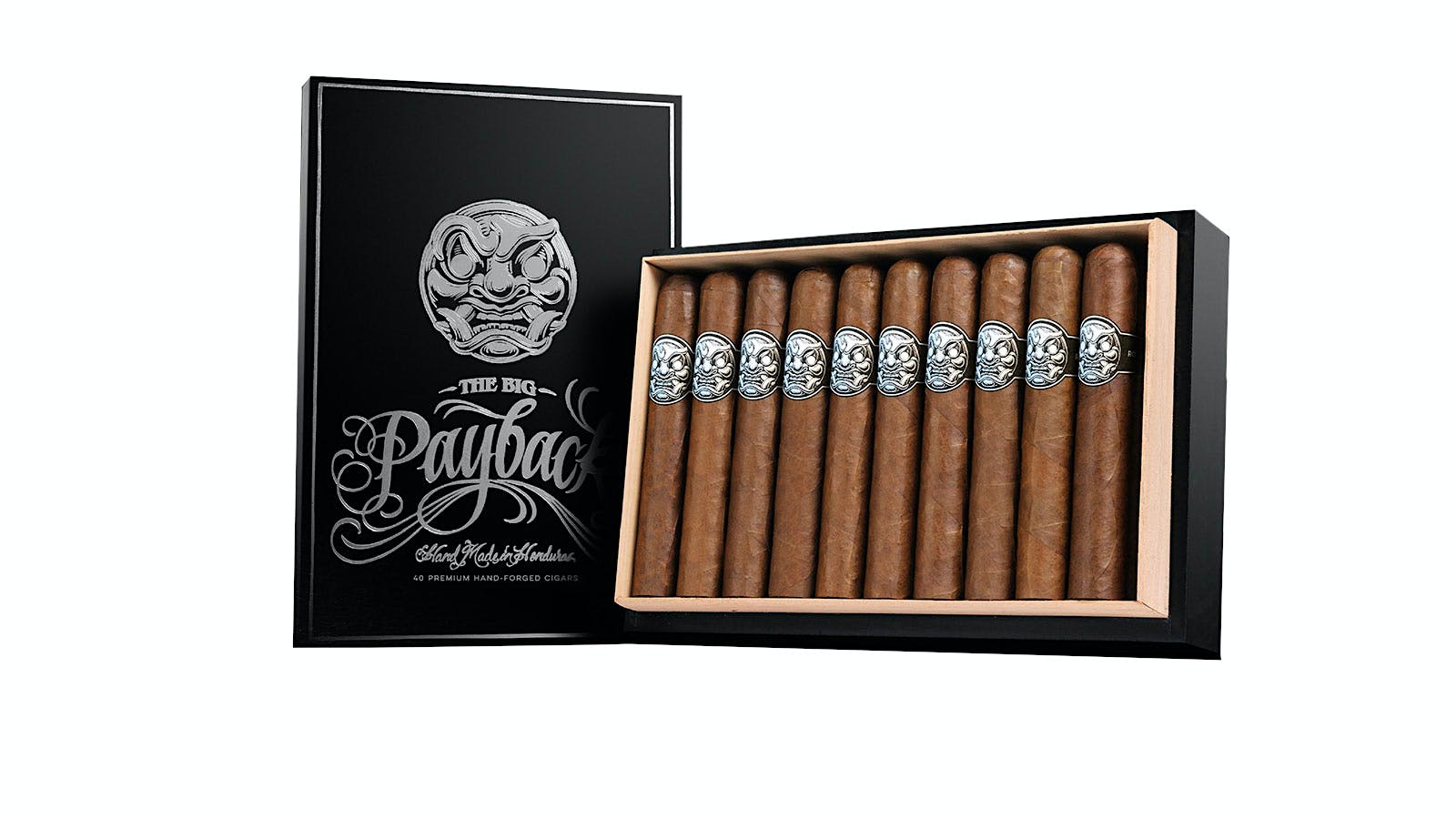 Brand owner Matt Booth is taking back The Big Payback. It’s a cigar line from 2014 that was manufactured and distributed by Davidoff. When Booth left Davidoff in 2017, he said that he left behind all the remaining inventory of Room101 cigars, but retained the rights to the brand names. Now, Booth has brought back a new version called The Big Payback Maduro. It’s made at General Cigar’s HATSA factory in Honduras and consists of a Connecticut broadleaf wrapper, Connecticut shade binder leaf and filler from Honduras, Nicaragua and the Dominican Republic. The draw here is the price. It comes in a Robusto, Toro and Gordo (6 by 60), all retailing for $6.50 to $7.50.

ME and MEII stand for the Mexican Experiment, and this new smoke from Pete Johnson of Tatuaje is made with Nicaraguan tobaccos blended to showcase the dark, Mexican wrapper used to complete the cigar. The line comes in four sizes, all of which are set to retail for $10: Robusto, 5 by 54; Belicoso, 5 by 52; Toro, 5 3/4 by 50; and Churchill, 6 1/2 by 48. A stronger version called MEII is also available in the same sizes and price point. ME comes in bundles of 15, but the MEII is packaged in boxes. The cigars are made in Nicaragua. 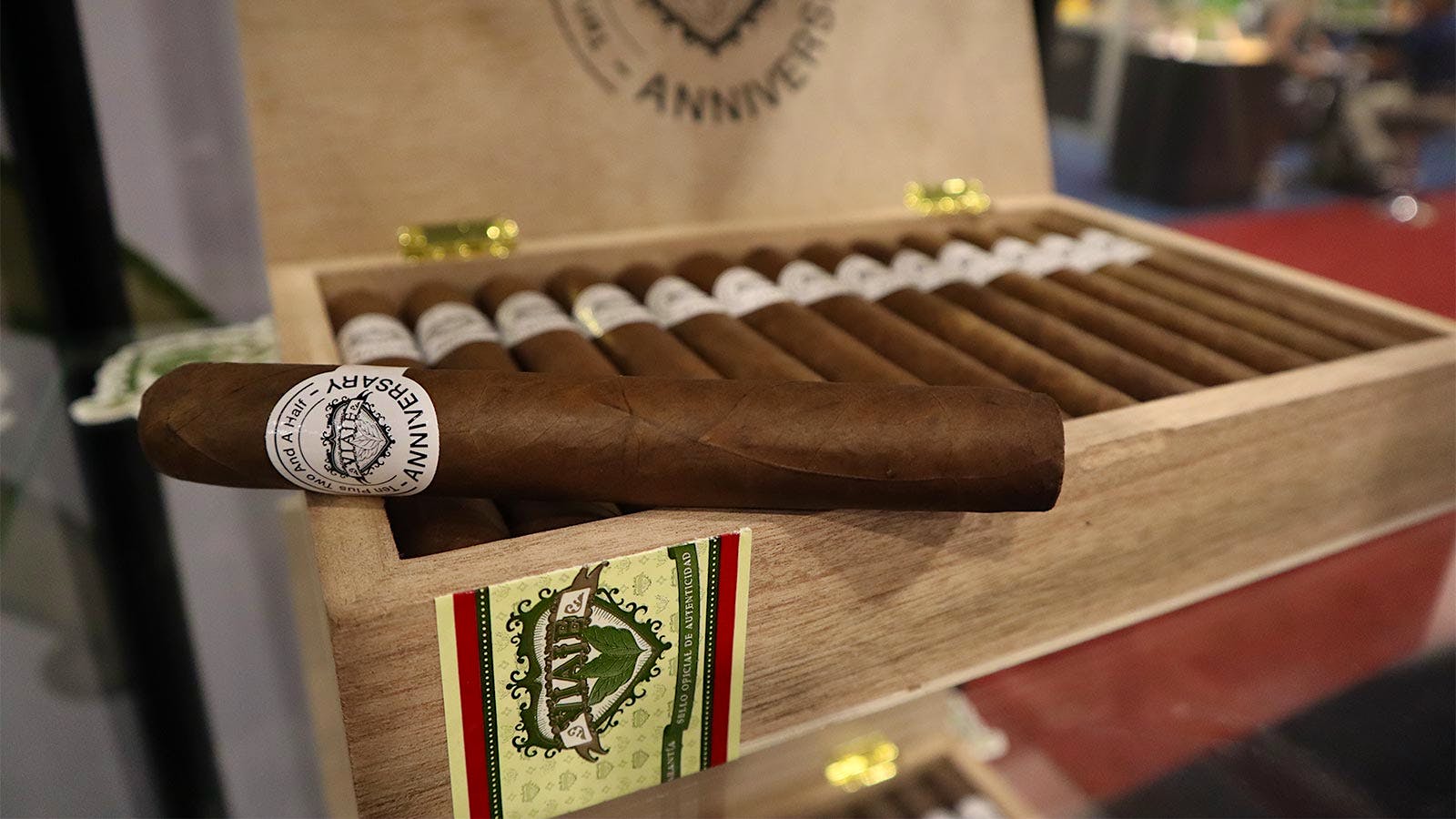 Brand owner Andre Farkas didn’t comment on why he named his celebratory cigar after a math problem rather than simply calling it the 12th anniversary, but that’s exactly what it is. The Viaje Ten Plus Two and a Half commemorates Viaje’s 12th year in business and comes in three varieties: Silver (all Nicaraguan tobacco, $13.28), Red (Mexican San Andrés wrapper, $14.48) and Gold (all Nicaraguan with some medio tiempo tobacco, $13.28). It measures 6 by 54 and is made at the Aganorsa Leaf factory in Nicaragua. 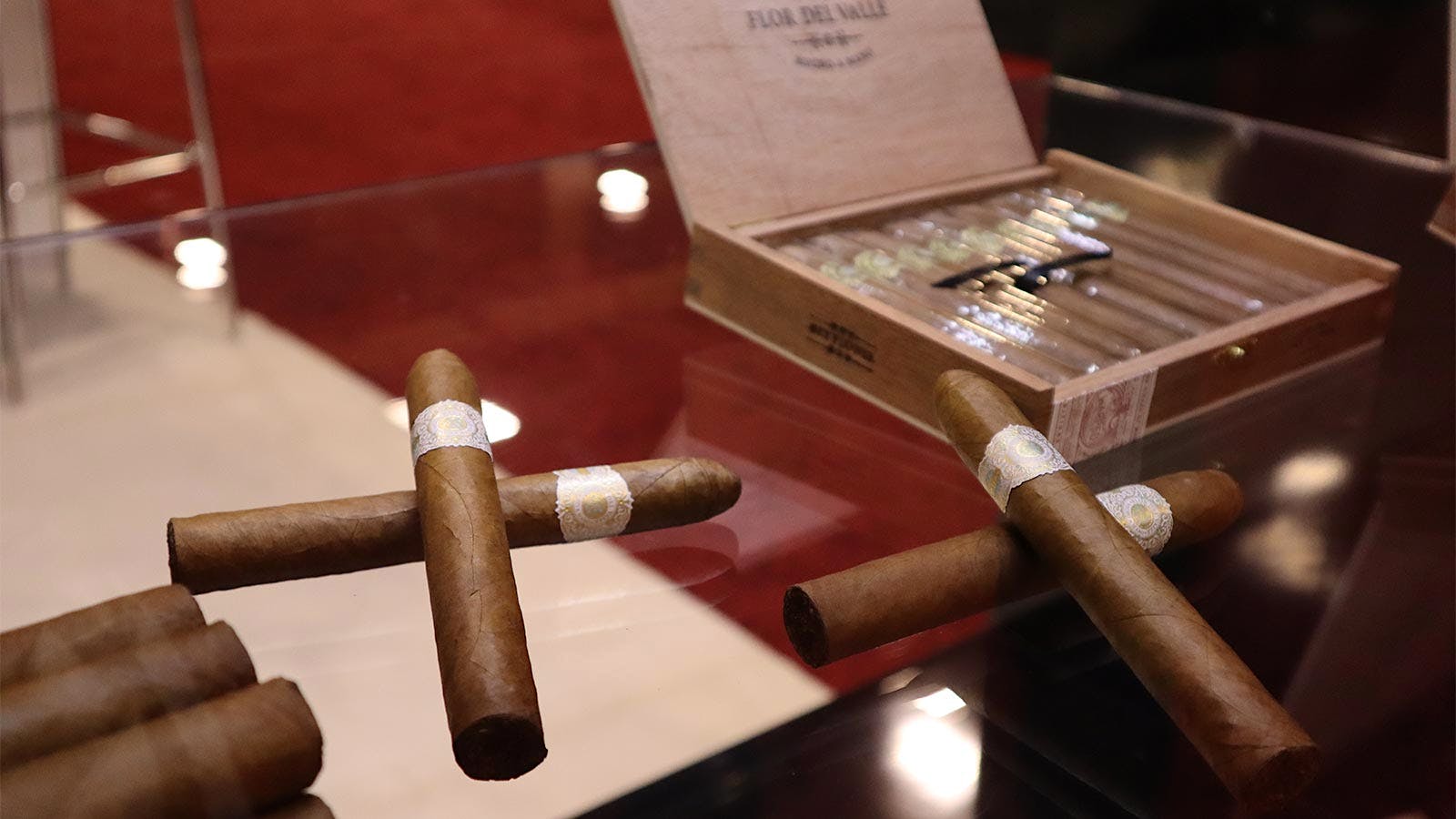 Fans of the Flor del Valle line will now have a new shape rolled with a 109-style head. Also known as a drop-head, the 109 is shaped with less of a taper than a belicoso or campagna bell-shaped head. At 6 by 52 ($12.95), it’s made in the Aganorsa Leaf factory with the same mold used for the Futuro Selección 109. All the tobacco is from Nicaragua.