Share
The chair in which Churchill sat at London's James J. Fox.

Imagining the great Sir Winston Churchill without a cigar clamped in his jaws or between his fingers is almost impossible. Stories that relate his prodigious drinking abound. His appetites for both, in quantities that would render even the hardiest among us incapacitated, seem superhuman. What is real and what is legend? Was he truly—as he is so often portrayed—never without a smoke, drinking morning, noon and night? To uncover the truth, we reached out to the experts: Lee Pollock, trustee and advisor to the Board of The International Churchill Society, and Rob Fox, a co-owner of James J. Fox in London and Ireland.

Reality: By any reasonable standard.

“The number of cigars he smoked is truly extraordinary,” says Fox, whose company sold its first cigars in 1787. Churchill was a client of the store (then called Robert Lewis) at London’s 19 St. James Street. Fox has handwritten ledgers, telegrams and other records that document that the soldier/statesman bought hundreds of thousands of cigars there. During one six-month stretch in 1964—the year before he died—Churchill bought 825 cigars: 250 in April, 275 cigars in June and 100 per month in July, August and September. “It was a pretty consistent pattern of what he was buying,” says Fox. And that wasn’t the only shop supplying him with cigars. “He was doing business with a lot of cigar stores,” says Fox, “but we were one of his largest suppliers.”

Legend: He would smoke just about anywhere.

Reality: According to photographic evidence.

While visiting New York City in 1931, Churchill momentarily forgot that Americans drive on the right (or wrong, in his view) side of the road and was struck by a car. Upon his return home to England, Churchill was strapped to a gurney and put into an ambulance. A photo of the moment shows him smiling happily, puffing on his cigar. It wasn’t the only time Churchill was photographed on a stretcher smoking a cigar. 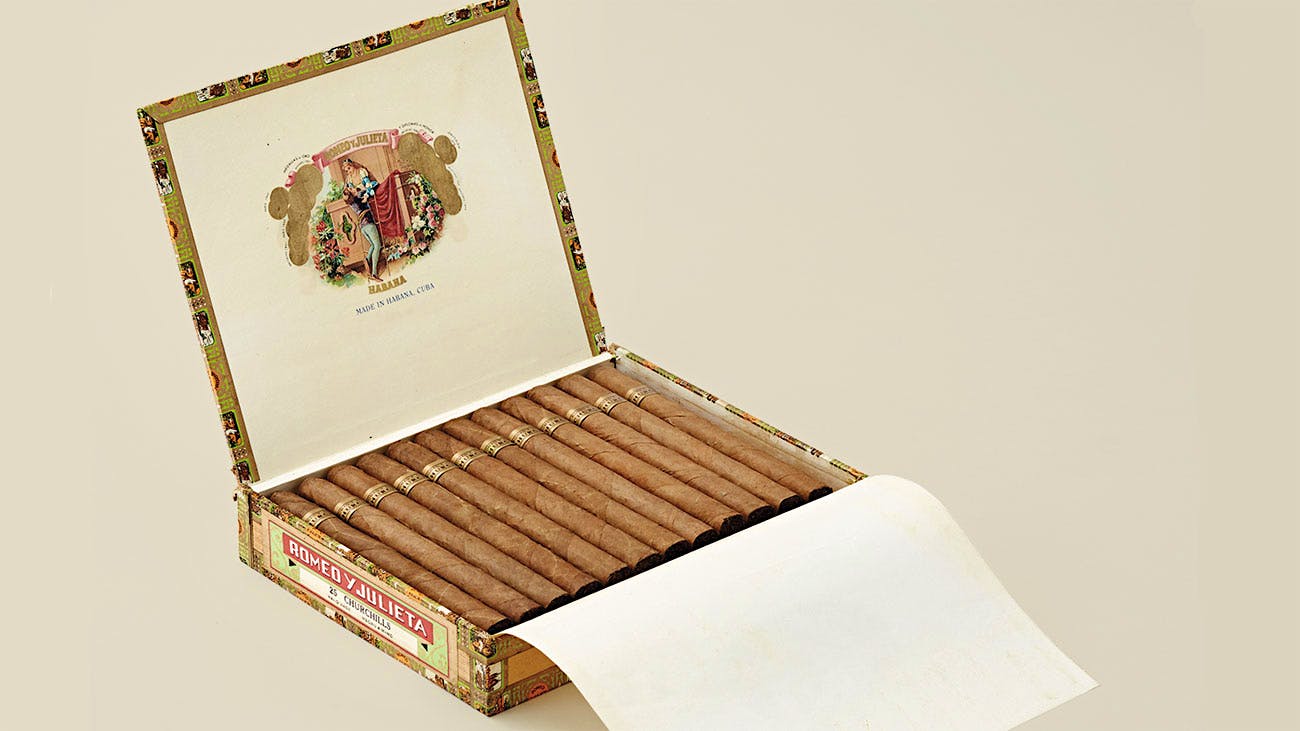 Photo/Jeff Harris
Vintage Romeo y Julieta Churchills, one of the most famous Cuban cigars. To find out when Churchills became Churchills, click here.


Legend: He only smoked Churchills.

Reality: Close, but no cigar.

Cuba’s Churchill size—seven inches long by 47 ring gauge—was named for the great statesman, but he smoked cigars of varying size. “He bought all sorts of different brands and sizes,” says Fox, whose ledgers show repeated purchases of Romeo y Julieta Pirámides and Romeo Epicure Grandes, which are no longer part of the main Cuban Romeo line, as well as other smokes.

Legend: He never shopped for bargains.

Reality: Depended on the occasion.

A telegram to the Robert Lewis shop, dated October 8, 1963, details Churchill’s order for a gift of cigars for his grandson. “A box of 25 cigars of good quality, but not quite as good as the Romeo & Juliet,” it reads. On a trip to the United States in the 1930s, according to Pollock, he bought Royal Darby Longfellows, paying $147 for 1,000 (less than 15 cents apiece). “He had to economize here and there,” says Pollock. “His bills for cigars, wine and food were considerable.”

Legend: He had vast stocks of smokes.

Reality: How big is your humidor?

Legend: His day began with a glass of Scotch.

Reality: It did indeed.

Just as portrayed in the film Darkest Hour, Churchill greeted the morning with a cigar and a Scotch and soda while in bed. Pollock explains that he would wake around 8 a.m. and begin reading through a stack of newspapers, not leaving bed until about 10. He would sip his Scotch, adding water to it throughout the day.

Legend: He was often inebriated.

Reality: He held his liquor.

“He drank a lot, but he didn’t drink near as much as popular legend would have it,” says Pollock. “The amount he drank was exaggerated.” It is true that Churchill drank Champagne with lunch, French reds and whites with other meals, Cognac later in the day and more Scotch at night. He also liked Martinis. (And he liked them exceptionally dry, unlike his ally, U.S. President Franklin Delano Roosevelt, who made them “very long on vermouth,” says Pollock.) But all this drinking didn’t mean Churchill was stumbling around. “There’s almost no record of him being drunk in public,” says Pollock, giving credence to Churchill’s famous line: “I have taken more out of alcohol than it has taken out of me.” 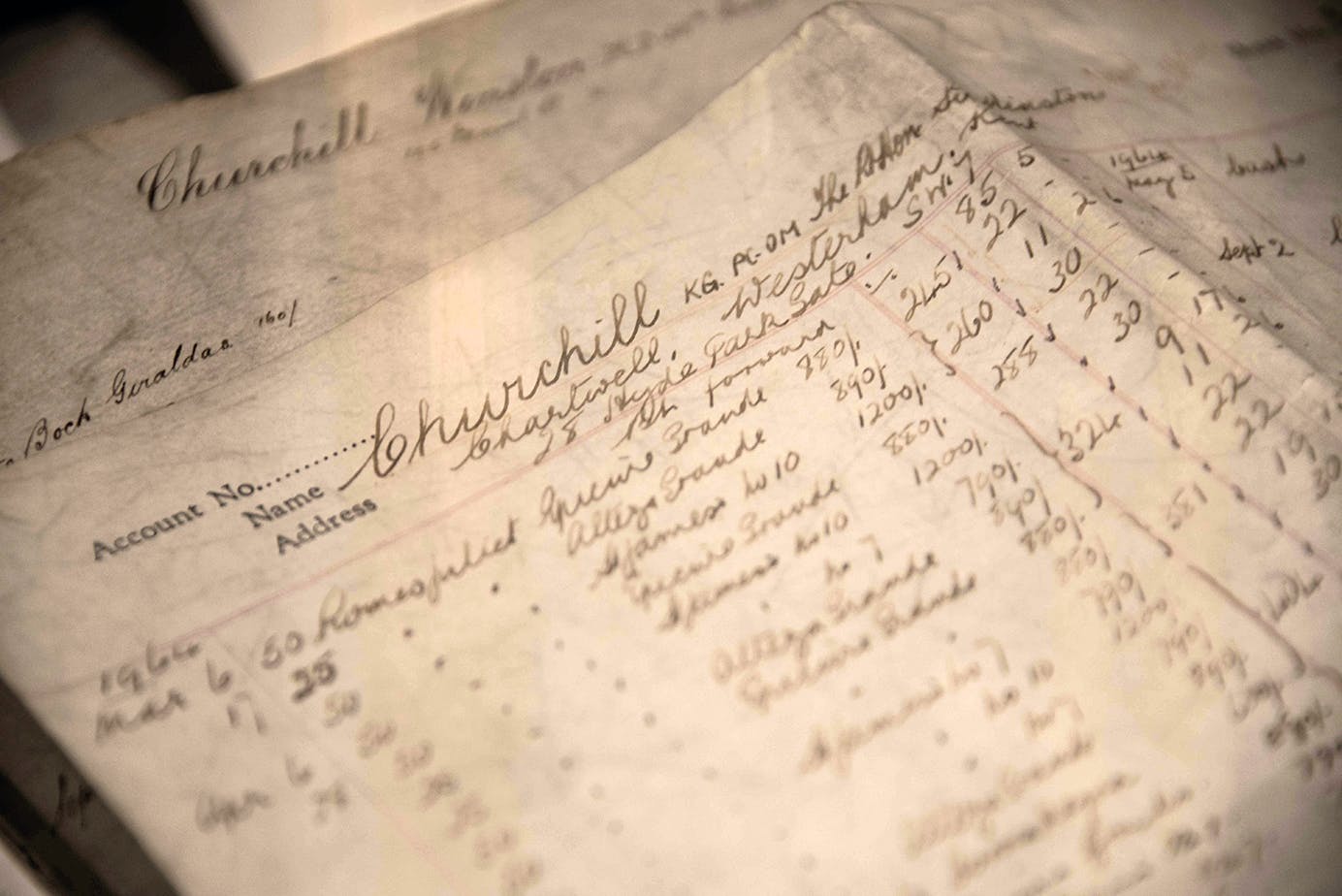 
Legend: He was brand loyal.

Reality: True, for his drinks….

Churchill’s Scotch of choice was Johnnie Walker Red or Black (blends were far more prevalent than single malts in his day) and he adored Pol Roger Champagne. “He became quite friendly with the Pol Roger family,” says Pollock. Pol Roger created a special Champagne in his honor, Pol Roger Cuvée Winston Churchill.

…But not his cigars. “His favorite brand was Romeo y Julieta, but it wasn’t the only brand he smoked,” says Fox. Most cigar smokers in Churchill’s day stuck to one size from one brand. Not Sir Winston, who puffed a variety, much like the cigar smoker of today, only on a far grander scale. “He was buying all sorts of different brands and sizes,” says Fox. “He bought multiple boxes of multiple lines per order. One order could be three or four brands, and multiple boxes within those lines.”

Legend: He left few cigars behind.

Reality: He smoked most of them.

“There was never a big, huge auction of cigars at the end of Churchill’s life. It wasn’t as if he was buying to collect,” says Fox. “He was buying to consume.” A box of cigars once owned by Sir Winston—along with the Romeo y Julietas it contained—is on display at Fox’s shop in London, under glass, along with a cigar case once carried by the Prime Minister.