The waiter pours your coffee, strong and hot. As you take that first, bracing sip, you stare out from your perch and look down upon the verdant green carpet stretched out far beneath you, the lush Cibao Valley of Santiago, Dominican Republic. Puffs of morning mist blanket the hills below, rising slowly, and you light your first cigar of the day.

The view from the wraparound balcony at the Camp David Ranch, a hotel and restaurant perched high above the city of Santiago, is breathtaking in the morning, and nearly as beautiful at night. From up here one can look down upon nearly the entire city, where most Dominican cigars are rolled. The small homes and buildings far below that dot the landscape—bright and green, small plots of farmland between houses and offices—seem to go on forever. It’s the second-largest city in the Dominican Republic.

It’s a city built on cigars. Arturo Fuente, La Flor Dominicana, Ashton, Macanudo, E.P. Carrillo, Aging Room, Davidoff, La Aurora, Quesada and so many other brands are rolled here. Much of the tobacco that goes inside of them (as well as cigars made in Nicaragua, Honduras and elsewhere) are grown in the fertile fields nearby. But Santiago didn’t always look this way. Thirty years ago, it was far smaller, more sleepy. As the demand for handmade cigars began to boom in the early-1990s, so did Santiago. The city grew, cigarmakers expanded their operations, and the owners and workers prospered. The hotels and restaurants in the city grew as well, and the airport was expanded, allowing easy access from many major cities in the United States.

Where once there were only Spartan hotel lodgings and few choices to dine, today there are comfortable places to lay your head and an ever-growing collection of restaurants for superb dining, as well as plenty of places to light up.

Camp David Ranch
Secluded, small and picturesque, Camp David has become our preferred spot for staying in Santiago. Getting there the first time is an eye-opening experience. It’s built at the top of a 2,000-foot peak (some call it a hill, but miniature mountain might be a more apt description) and at times the car taking you there might struggle with the incline. But once you arrive you are treated to relaxation and a particularly cigar-friendly atmosphere.

There are 18 rooms at Camp David, and 14 of them have small balconies for you to enjoy a smoke, but the ideal spot is on the porch that surrounds the restaurant. Part of it is smoker friendly, and it offers views that cannot be beat. You’ll look down from high above, basking in the reward of that long drive up. The food here is good, particularly at breakfast, and grilled meats or perhaps a platter of jamón sate your appetite in the evening. We often end a day seated outside, smoking a cigar.

The rooms were once quite rustic, but a recent renovation has made them far nicer. Renovation on that long road taking you to the hotel has also made the drive easier. 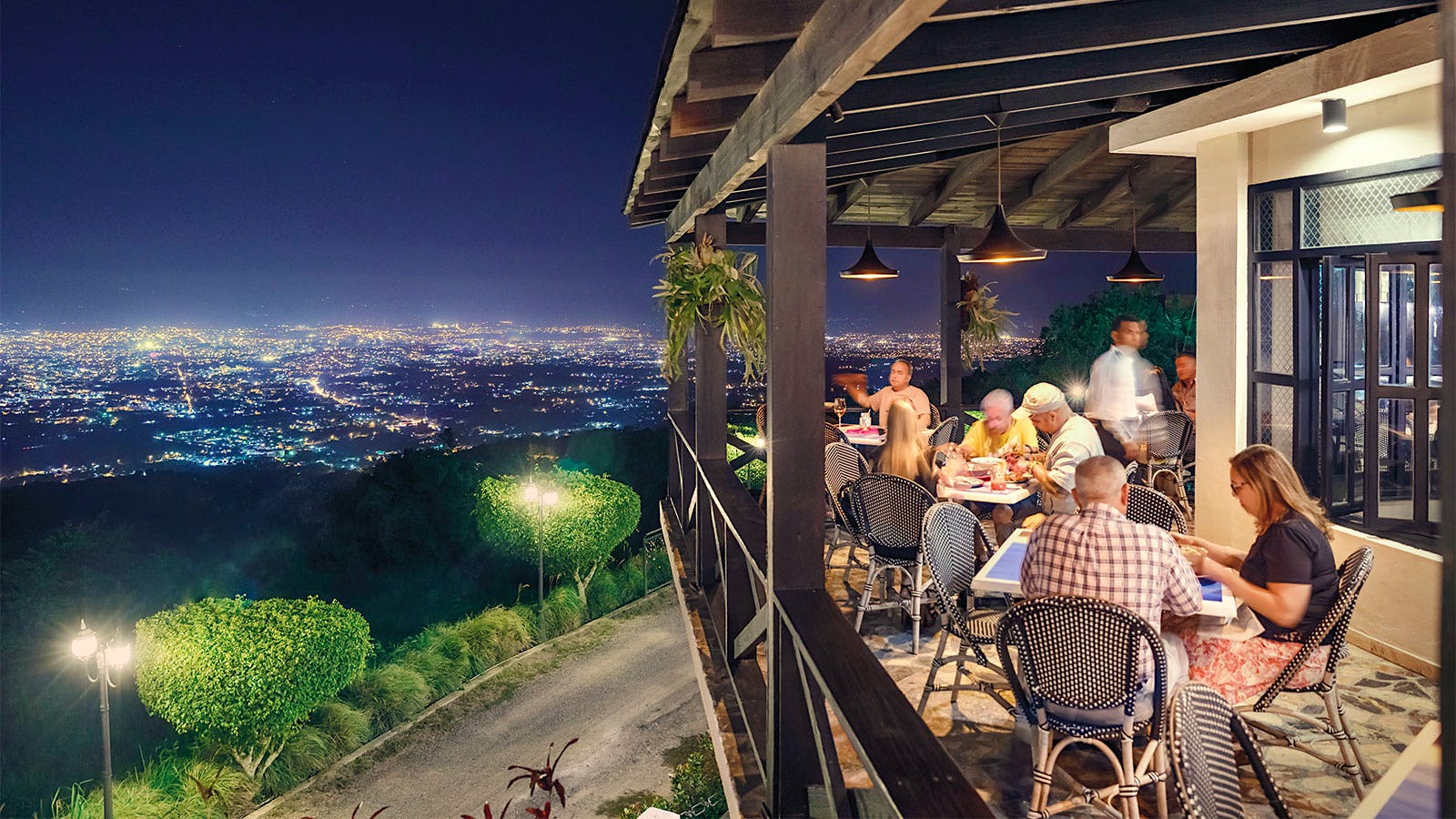 The lights of Santiago are like a carpet of stars on display for diners at Camp David. Photo/Peter Garritano

Hodelpa Gran Almirante
The largest and most popular hotel in Santiago, the Gran Almirante is a five-story tall hotel with 154 rooms and a casino. Back when the Dominican cigar industry was in its pre-cigar boom stage, the hotel was small, but as the cigar industry surged, the Almirante expanded. Today, it’s large and comfortable, with a beautiful pool.

One sad side effect of the expansion is that the hotel no longer fully caters to the cigar smoker. The lobby, once the preferred place to puff, is no longer cigar friendly, and for a time there was no spot to smoke except for the pool. (For a short time, the hotel tried to put smokers at a table inside the parking garage, if you can believe it.) A few years ago, the Almirante created a small but workable cigar smoking area just off the lobby, in the open air. The hotel also has a cigar shop with a very good selection.

Meals in the hotel are decent, especially for breakfast or a quick bite, but for dinner you can do much better elsewhere in Santiago. Its central location on an extremely busy street makes it easy to get to just about everything in the area, including the airport. The rooms here are clean and modern, although they can be loud, especially in the vicinity of the casino or the pool. And they are especially good on the executive floor, known as Club Imperial, which features its own check-in area, a private restaurant and much better room amenities, including Egyptian cotton linens and quite a comfortable bed. Rooms in season begin at $170.
Av. Salvador Estrella Sadhalá Santiago, (809) 580-1992 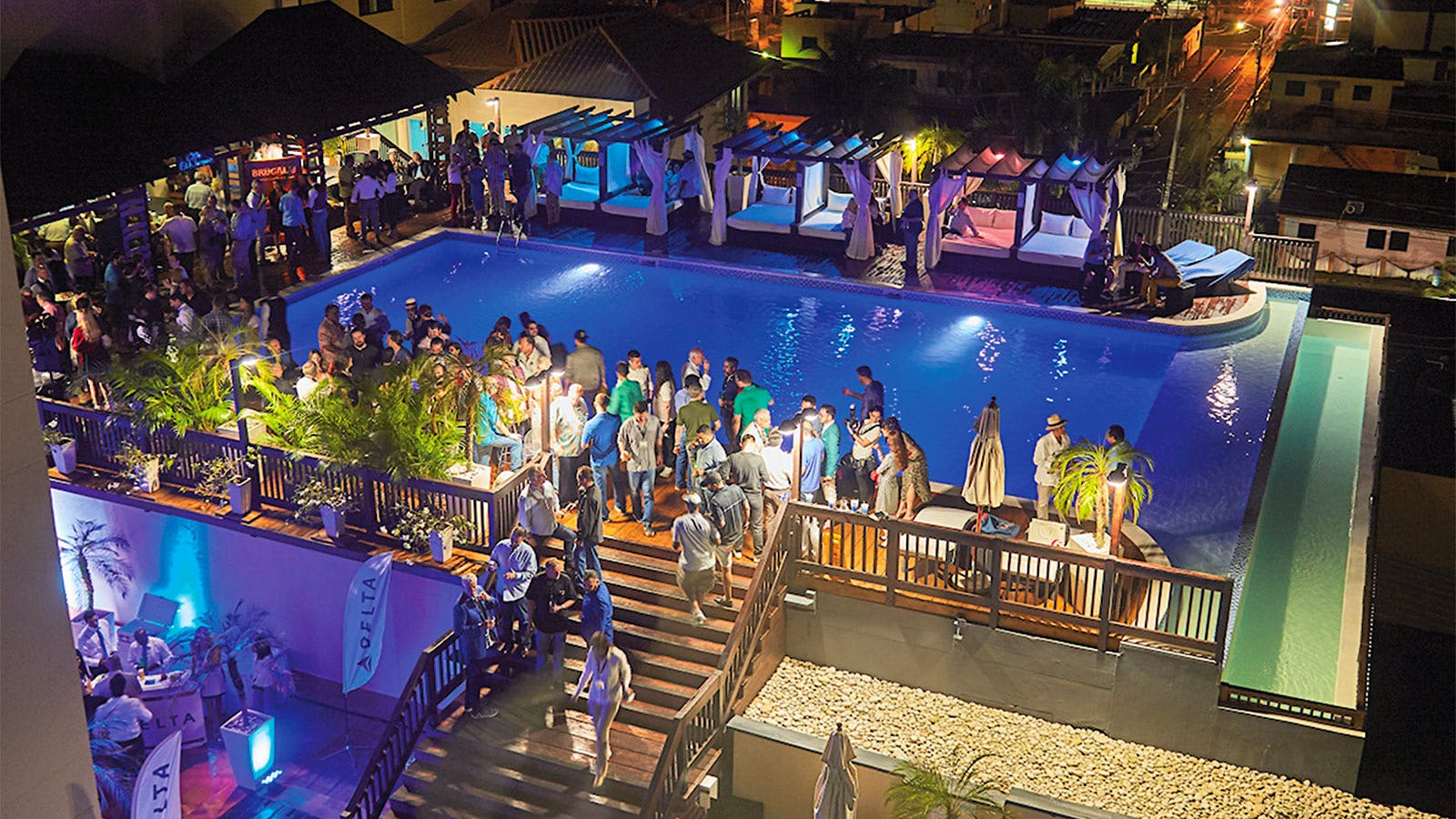 La Aurora Cigar World
The oldest cigar factory in the Dominican Republic has proudly put its entire operation on permanent display. A visit to La Aurora S.A., which has been making cigars since 1903, will give you a fascinating lesson in its long family history to enhance your appreciation for Dominican cigars.

Company owner Guillermo León’s vision was to create a cigar experience that goes beyond a mere stroll through the factory floor. A highlight is the tobacco museum, an elaborate exhibit designed to detail the art and craft of cigar production as well as the cultivation of tobacco. There’s a great sense of history and romance to every part of the exhibit, which is full of industry props and interesting displays, and even makes full use of live plants and real tobacco, adding a bit of fun to an otherwise academic presentation. The tour ends in the factory store, which sells the entire range of La Aurora cigars, plus rum and coffee.
Ctra. Santiago–Tamboril, Km 5, (809) 734-2563 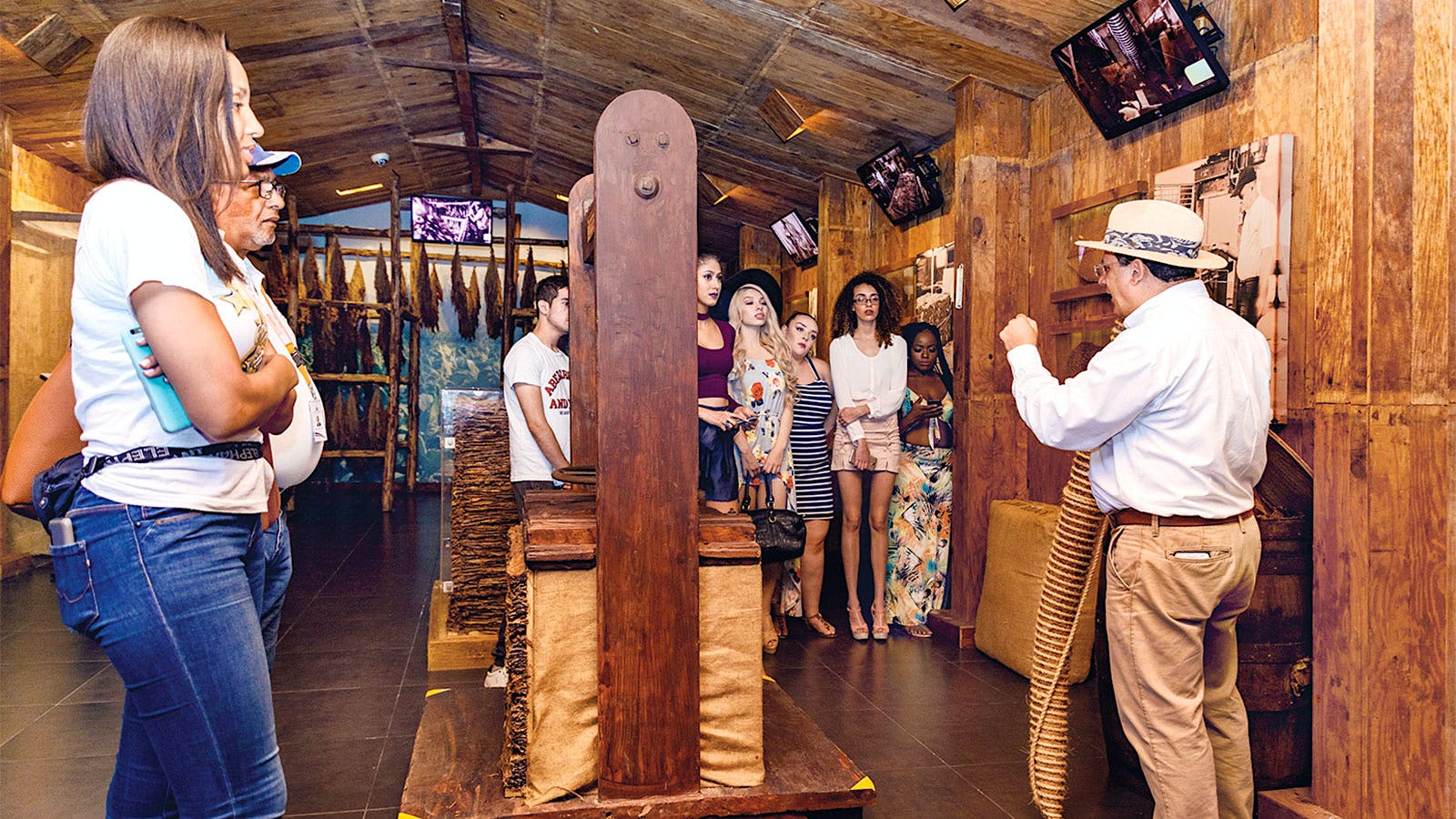 ProCigar Festival
If you’ve never smelled the honey-like aroma of tobacco as it hangs in a curing barn or witnessed the focus of cigar rollers in action as they toil at their rolling tables then you’ve yet to take your cigar appreciation to the next level. Normally, most cigar factories and tobacco fields in this country are closed to the public, but the festival is a time of hospitality and unusual transparency. Cigarmakers open their doors, giving you full access to their operation, from cigar factories to tobacco fields. While the five-day festival begins in La Romana, most of the action takes place during the second leg, in Santiago. Almost every major cigar company in the Dominican Republic participates. Each night, there’s a big cigar dinner where all the attendees and industry members converge. The dinners go late, the dancing goes later, the music is loud and you are always flush with cigars—sometimes even more cigars than you can comfortably carry.
Visit procigar.org

There’s no better way to connect with local culture than through its cuisine. This is especially true in the city of Santiago, where certain dishes help to define the region’s identity. But the search for authentic experiences can sometimes be confusing, if not intimidating, especially for less adventurous diners. Here are some of our favorites, as well as those of Santiago’s cigarmakers.

Barttola Brasserie
“Everything is spectacular,” says La Flor Dominicana maker Litto Gomez, a frequent guest of Barttola. The menu is broad, with eclectic choices ranging from miniature tacos to risotto with chivo (goat). Chef Francisco Javier Cabrera Peréz has a Michelin star from his previous work in Spain. The cigar-friendly terrace is ideal for puffing while you dine.
Av. 27 de Febrero, Jardin Plaza, (809) 971-9294 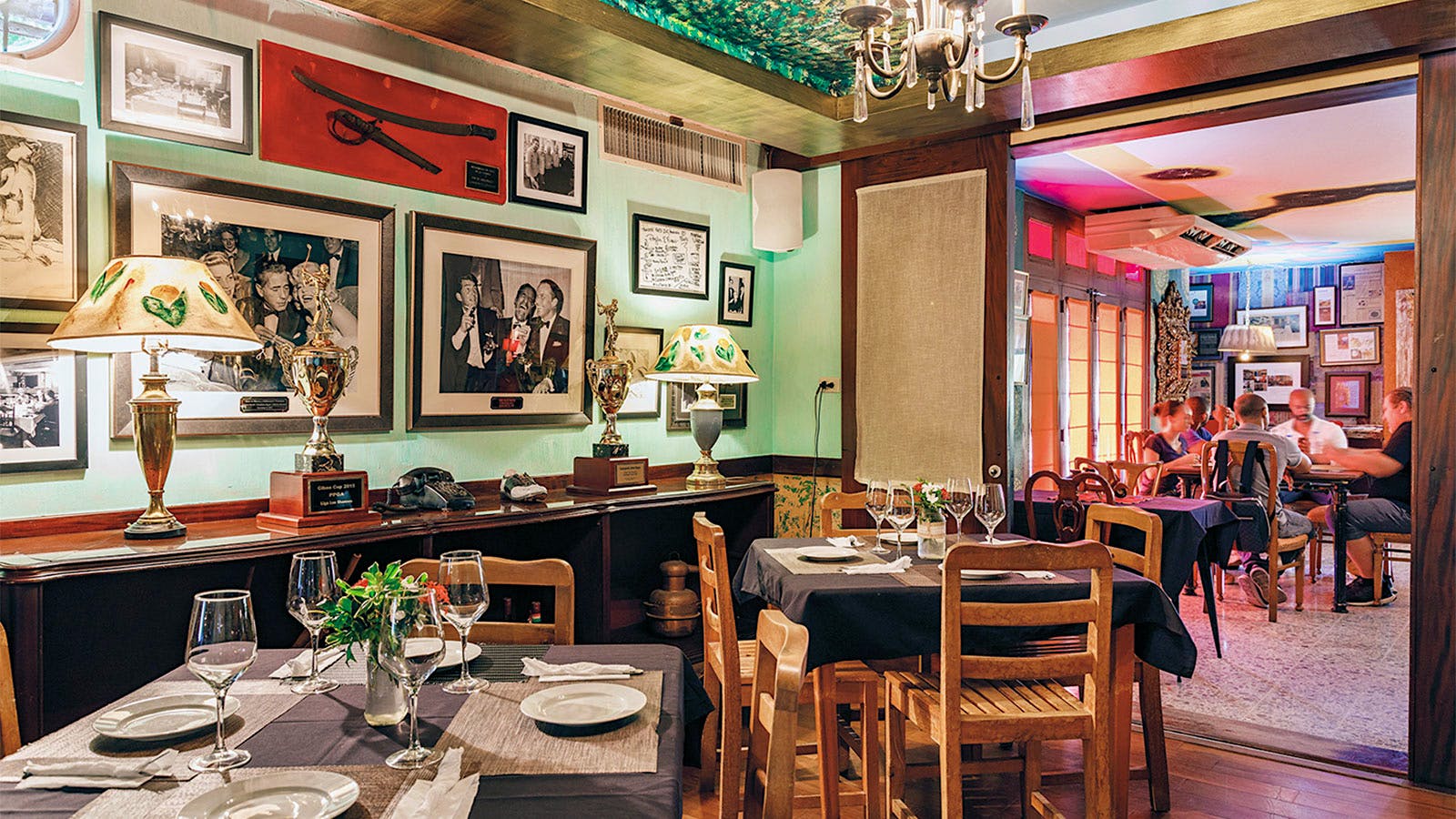 Il Pasticcio Cucina Italiana
The reason you can smoke in the backroom of this pleasant bistro on a quiet street is that years ago cigarmaker Carlos Fuente Sr. was so impressed with the cuisine that he offered to enlarge the space and make a cigar room. Walk inside and you’ll likely be greeted by gregarious host Paolo Modolo. Once the food begins hitting the table you will smile. Each bite is artfully done, reflecting the creativity of the owner.
Av. El Llano Esquina Calle 3, Cerros de Gurabo, (809) 806-1277

La Campagna
You may find yourself at La Campagna for breakfast and then again for lunch in the same day. The restaurant’s desayuno Criollo (native breakfast) is a gut-filling combo and the restaurant makes a great Cuban sandwich. You can smoke under the thatched roof.
Av. Juan Pablo Duarte, (809) 724-2353

La Parrillita
Mofongo might be an odd-sounding word to Americans, but it’s a beloved, starchy staple in the Dominican Republic (see page 92) and an essential must-eat if you want to dine like a local. A good place to start your mofongo research would be La Parrillita, which serves it five different ways.
Av. Juan Pablo Duarte 162, (809) 583-1925

Noah Restaurant and Lounge
Noah is visually striking, and its ceviches and risottos are particularly good. Cigarmaker Manuel “Manolo” Quesada goes there for quality sushi. “It’s hard to get sushi in Santiago,” he says. The restaurant has an area up front where smoking is allowed.
Calle del Sol Esquina Francia, (809) 971-0550

Pedro Restaurant
Spain may be the birthplace of paella, but Santiago has co-opted the classic rice dish. Abe Flores says Pedro serves a solid rendition, and in a cigar-friendly atmosphere. Be sure to get a table in Pedro’s smoking room. It’s a closed-off area of the restaurant where your cigars can happily coexist with your crustaceans.
Salome Ureña #18, Los Jardines, (809) 582-2144

Restaurante El Zaguán
As one of the Dominican Republic’s national dishes, mofongo is available almost everywhere in Santiago. According to Ernesto Perez-Carrillo, you’ll need to leave town a bit if you really want to experience the gold standard. The casual, ranch-style restaurant in question is called El Zaguán, and it’s in the La Vega Province, which is about a 25-minute drive from downtown Santiago. They simply stick to script and make it with traditional technique and national pride—no different than the country’s cigarmakers.
Av. Pedro A. Rivera, Concepción de La Vega 41000, (809) 573-5508 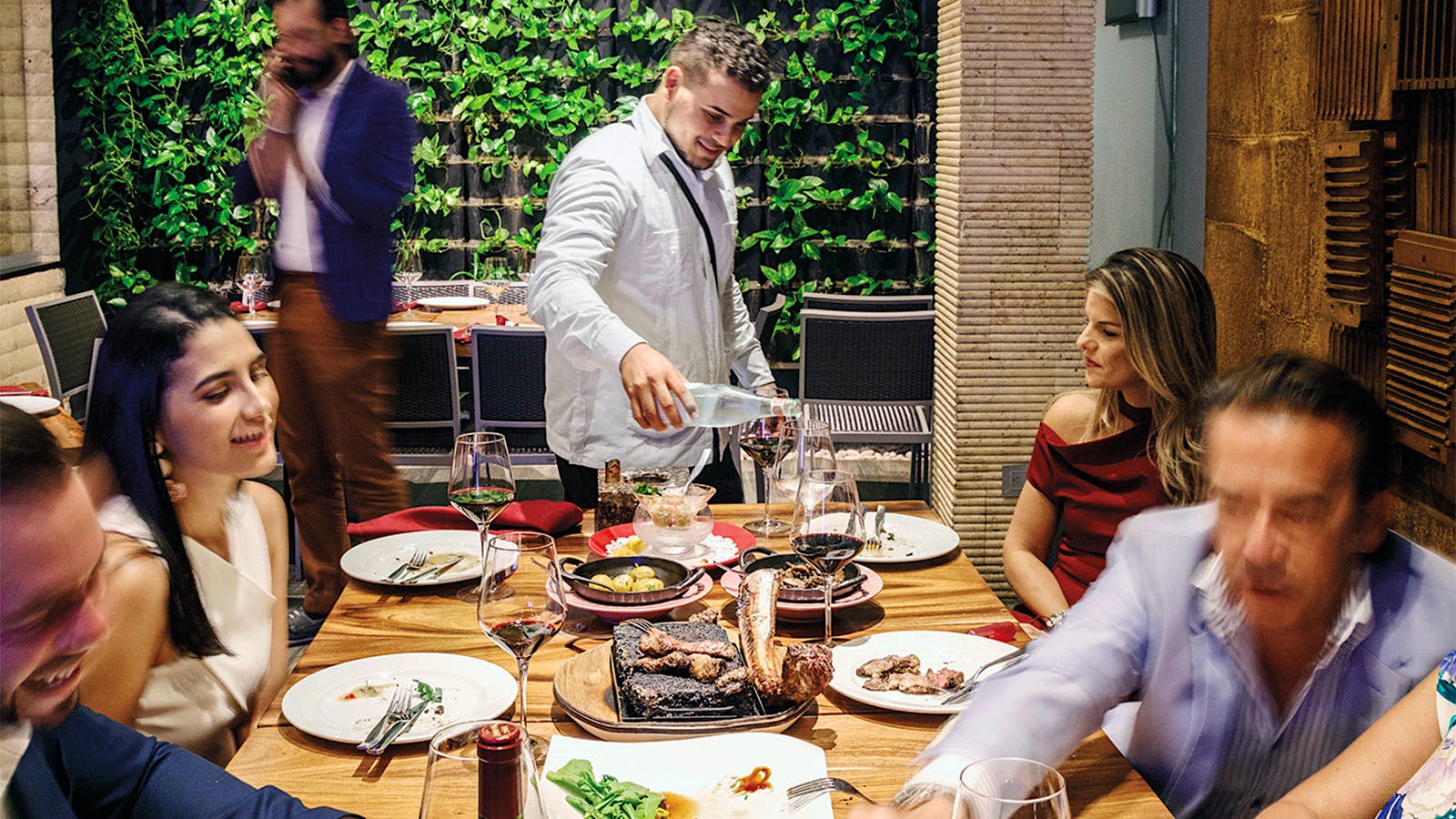 Saga Restaurant & Cigar Club
You smell it first, and hear it soon after. It’s beef—great beef—sizzling in protest against the phonebook-sized slab of salt that it sits upon. The salt is black and angry, holding what seems like the heat of 100 suns, and the meat is thick and juicy, its fat oozing onto the salt and adding even more aroma to the air. Welcome to Saga, home of the Cowboy Steak. The Tomahawk-style ribeye is the trademark dish of a restaurant that will change the way you feel about a meal in Santiago.

Saga takes cigar friendly to a new level. The standout wine list comes in a cigar box, and smoking is welcome here. It won’t surprise you that it is owned by cigarmakers: Augusto “Fufi” Reyes and his daughter Nirka, from De Los Reyes cigars. The restaurant has an upscale, modern décor, and there’s far more to the menu than beef. There are pastas and risotto as well as sushi, croquetas made with decadent jamón ibérico and more.