Cigar smokers looking to pair their tobacco with amicable drinks have been well-supplied in recent years by a boom in spirits, particularly American Bourbon and rye whiskeys. But another category, which has an even longer heritage in the New World, has also added alternatives at a dizzying pace: high-quality, aged rums.

If you have been thinking of rum as simply the alcohol delivery system for the insipid cocktails served seaside on a tropical vacation, a world of flavor awaits. It’s time to graduate from clear, unaged and unexciting rums to the many rums that have been carefully and patiently wood-aged, which opens up an unexpected spectrum of sultry flavors that are perfect partners for your favorite robusto.

“Aged rum has more complexity. That comes from the barrel,” says Julio Cabrera, the founder of Miami’s Cafe La Trova and 2019’s Tales of the Cocktail bartender of the year. “It is very elegant, so you can get flavors like tobacco and caramel.”

The reasons that rum and cigars make a pretty pair are myriad. First they share common ground: sugar cane and tobacco are often grown in the same regions, sharing similar soils in the Caribbean and Central America. Such countries as Nicaragua, the Dominican Republic and Cuba raise both crops. Furthermore, many cigarmakers are rum drinkers, and it’s not much of a leap of logic to imagine them blending with a partnership in mind. But the proximate reason is that as a sugar spirit, rum delivers the sweetness that so often complements the wood, spice and leather notes of a hearty cigar. 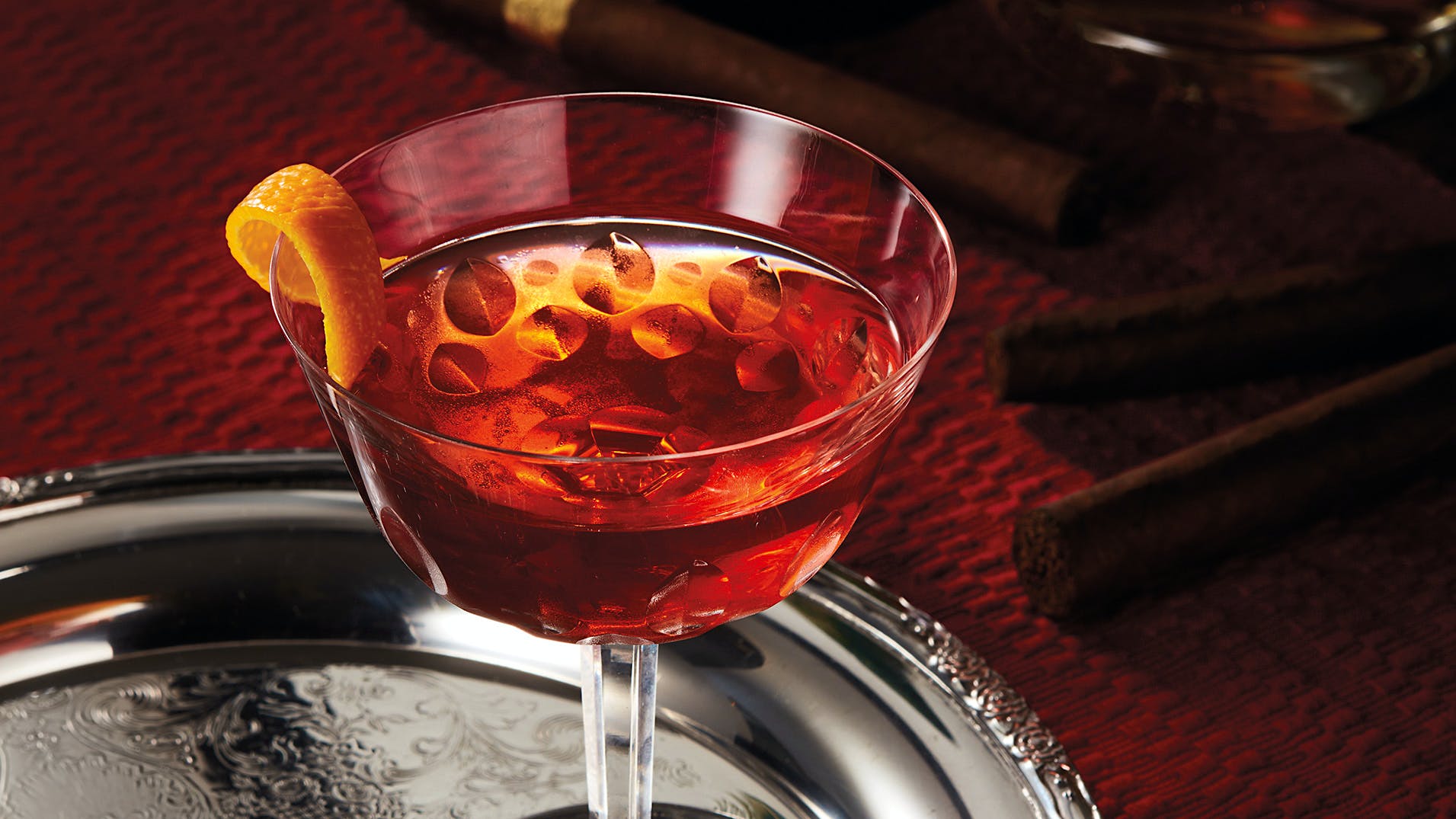 The El Presidente originated in Cuba as a cocktail made with aged rum, white vermouth, curaçao and grenadine.

Aged rums also unlock new possibilities for mixed drinks. While white rums lead the way for summer cocktails, swapping in mature rums instead can result in more grownup cocktails. The outcome can be more savory and appropriate for drinking in the evening as you might with other aromatic cocktails. “I can say an aged Rum Old-Fashioned is even better than a Bourbon Old-Fashioned,” says Cabrera. “Especially with cigars.” Tim Wiggins, beverage director of Yellowbelly in St. Louis, concurs, saying that rum adds coconut and other tropical notes to the drink.

“For some reason, some classic rum cocktails are much better with aged rums,” says Cabrera, ticking off a few, such as the Rum Manhattan (made with bitters and sweet vermouth); Hotel Nacional (with pineapple, lime juice and apricot liqueur); the very similar Air Mail and Old Cuban (both made with lime juice and Champagne) and one of our favorites, El Presidente (see below). Each combines the flavor of the ingredients with the sweet and hearty notes found in a fine, old rum. “With aged rums you are adding more than just alcohol,” says Cabrera.

Wiggins cofounded Yellowbelly to showcase a wide selection of rums. Knowing that cocktails would be a calling card to introducing patrons to rum, he says, they focused on creating more sophisticated cocktails than the typical tiki fare. The approach was to think of a particular rum in terms of its stylistic similarity to another spirit—say Highland Scotch or Kentucky Bourbon—and use it in that way to create drinks.

Because rum is made in so many places across the globe, it offers a wide range of styles. Alas that creates a caveat for the category: it is not well-regulated by law. A host of additives are allowed and age statements can vary in meaning. Does the number represent the youngest rum in the bottle as with many whiskeys? Perhaps. Or it could be an average age of what’s inside, or even that there’s one ounce of very old rum hidden inside, which prompts a claim of antiquity in an otherwise very young spirit? “It’s marketed as the outlaw spirit and I think that’s the worst part about rum,” says Wiggins. “Rums can be drastically different.” As the lack of regulation can lead to disappointment, he adds that part of his job is helping customers find their way in the rum renaissance. With that in mind, we tackled 14 aged rums from a host of nations to illustrate perfect partners for your next great cigar:

A World of Cane: 14 Aged Rums to Pair With A Cigar

Appleton Estate Black River Casks (Jamaica, $65):
This new release, with a minimum 15 years of age, is a nod to its source of limestone-filtered water. The spirit melds pot- and column-stilled rums.  Palate includes orange, banana, pineapple, ginger and nuts.

Bacardi Gran Reserva Limitada  (Puerto Rico, $100):
This is the longest matured of the Gran Reserva line at an average of 12 years in lightly toasted American oak. The bottles are numbered and dated by batch. Lush notes of leather, caramel and toffee meet banana and vanilla.

Ron Barcelo Imperial Onyx (Dom. Rep., $25):
This Dominican rum is the 12-year-old big brother to Barcelo’s Gran Añejo Dark Series. Both are aged in Bourbon casks of very deep char, but the Onyx edition is also filtered through the stone of that name. Cherry, spice and a parade of cocoa and tropical fruit.

Brugal 1888 Doblemente Añejado (Dom. Rep., $40):
Brugal is among the drier of aged rums, and makes a good transition into enjoying cane spirit. Finished in first-fill Sherry casks for tastes of nutmeg and cinnamon alongside caramel.

Diplomático Reserva Exclusiva (Venezuela, $40):
Diplomático ferments both molasses and sugar cane juice for its pot-still distillation, which is then aged in small casks. Notes of maple candy, caramel and fruits like cherry and wild berries.

Flor de Caña 12 (Nicaragua, $35):
Column-stilled and made from molasses sourced from a single estate not far from some of the world’s greatest tobacco fields, it smacks of molasses, caramel, orange, pecans and walnut.

Papa’s Pilar Ernest Hemingway (Various Countries, $35):
We’d be partial to Papa’s Pilar based only on its championing of cigar-and-rum pairings (gear sold online includes a flask with a cigar holder). But the big reason to try it is a range of flavors that include apricot, cocoa, coffee, cinnamon and butter rum.

Zacapa Centenario 23 (Guatemala, $40):
Another solera rum, Zacapa grows its sugar in the valley and ages the distillate in the cooler mountains. Complex with caramel, vanilla, orange and snaps of ginger and anise.

Zafra 30 Years (Panama, $210):
Released in very limited quantity, this ultra-aged Panamanian may prove harder to get than its 21-year-old younger sibling, but it’s worth the search. It comes on very syrupy and then opens up to reveal a wide scope, including vanilla, cherry, tropical fruit, brown sugar, cinnamon and banana.

Zaya Gran Reserva (Trinidad, $30):
The calling card for this Trinidadian rum is its smoothness, which makes it an apt aged rum for mixing. Notes include brown sugar, hard candy and baking notes like Christmas pudding.

The ballot of rum drinks may be long, but El Presidente stands apart with distinction. It embraces the implicit sweetness of the base spirit, but appeals with an aromatic that shows off the savory character of a classic cocktail. Once dubbed “the aristocrat of cocktails,” El Presidente is no longer the type of drink you see on every menu. But once you get this elegant cocktail right, it may be voted commander-in-chief of your bar. This is a serious cocktail that gets along very well with a cigar.

Born in Cuba around 1915, El Presidente would later become a favorite among vacationing Americans who were dodging Prohibition. The namesake president was surely Mario García Menocal, but the inventor is not as clear. One of the claimants, Eddie Woelke, would tweak it a decade later by adding Curaçao and rededicating the drink to a subsequent head of state.

No formula is definitive, as recipes have wavered over the decades, from white to gold rum with changing ratios. We prefer a mild-aged spirit—mainly for its gravitas, but not incidentally for its soothing color. This, after all, is not a poolside drink. We’ve also boosted the rum-to-
vermouth ratio from 1:1 to something closer to Manhattan proportions. Furthermore early recipes were inexact, calling for “French vermouth.” Recent research suggests that the original ingredient was the sweeter “blanc” type of white vermouth, as opposed to “dry.”

Ingredients:
- 2 oz. rum, aged about 8 years old
- 1 oz. white vermouth (look for Dolin Blanc)
- 1/2 oz. dry Curaçao (this spirit will be orange or clear. Do not use blue Curaçao, a bottle that should be removed from your bar immediately.)
- Splash of grenadine
- 1 dash aromatic bitters
- Orange twist

Directions: Stir the ingredients, sans twist, with ice in a mixing glass. Strain into a coupe or cocktail glass. Top with orange peel.