It seems that Habanos spared no expense on Friday night when the company threw its final gala cigar dinner to conclude the 22nd Habanos Festival. The PabExpo center in Havana was decked out in a romantic shade of red and converted into a sensuous banquet for more than 1,200 people, all of whom were among the first in the world to try the Romeo y Julieta Línea de Oro, a new ultra-luxe line from Romeo that surpasses the original in both strength and price.

But the real show stopper of the evening was the annual humidor auction, which made Habanos history with a sleek, large cabinet of Cohibas that closed at a bid of 2.4 million euros ($2.7 million)—the highest ever raised for any humidor in the history of the festival. 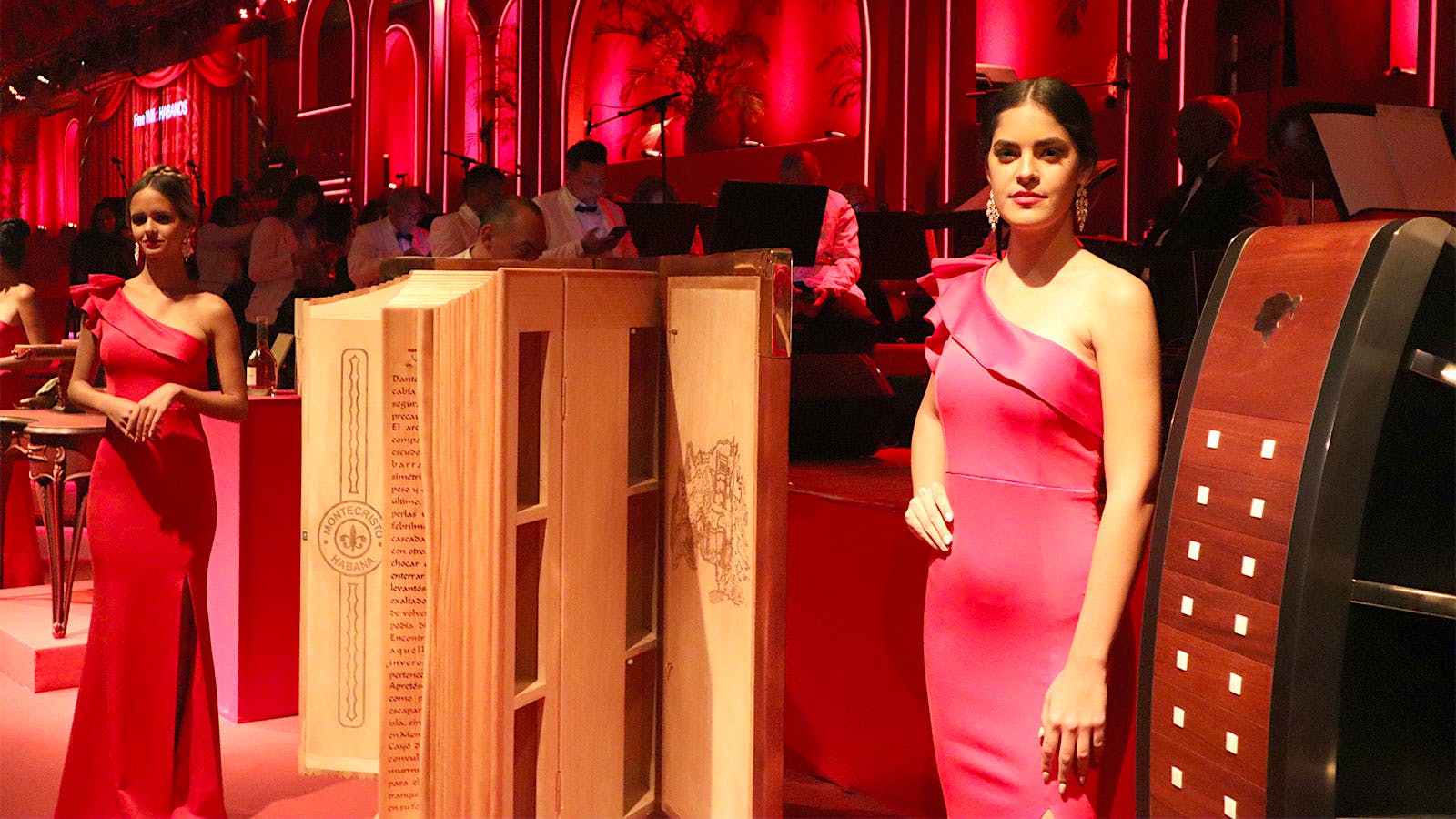 The Montecristo Humidor (left) holds 450 cigars, while the Cohiba Humidor contains 550, many of which are quite extraordinary. Both humidors commanded high prices at auction.

The evening—the last event of the weeklong Habanos Festival—was a tribute to Romeo y Julieta, an iconic brand celebrating its 145th anniversary. To honor such impressive brand longevity, Habanos will be releasing the Línea de Oro line later this year. On Friday, the dinner guests got the chance to preview all three of the sizes. The Hidalgos (which measures 4 7/8 inches long by 57 ring gauge) were the first cigars of the evening, handed out in the ballroom lobby by a cadre of hosts and characters dressed for a Verona masquerade. 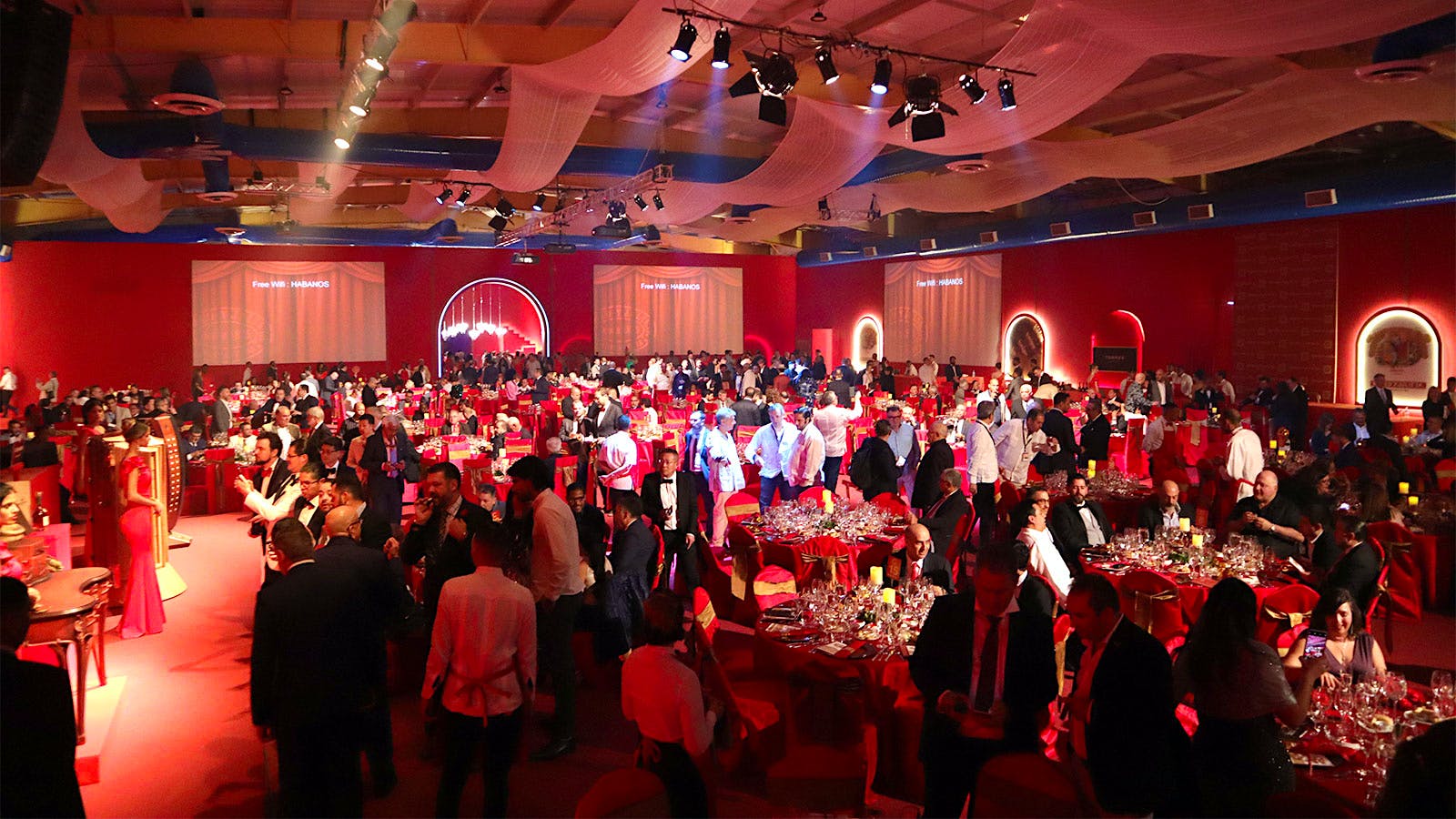 Romantic shades of red make a large ballroom of more than 1,200 seem more intimate, playing to the theme of Romeo y Julieta.

“This could be the golden year of Romeo y Julieta,” said Habanos co-president Inocente Núñez Blanco from the stage as he joined in the welcoming toast with his fellow co-president, Luis Sánchez-Harguindey.

The night was scored by one musical act and dance performance after the next, showcasing everything from Flamenco to big band to ballet, all in some way referencing the legendary romance of Romeo and Juliet. The audience smoked contentedly through the show and the meal, and with each dinner course came a new cigar, passed out by servers carrying trays of Cuban smokes. 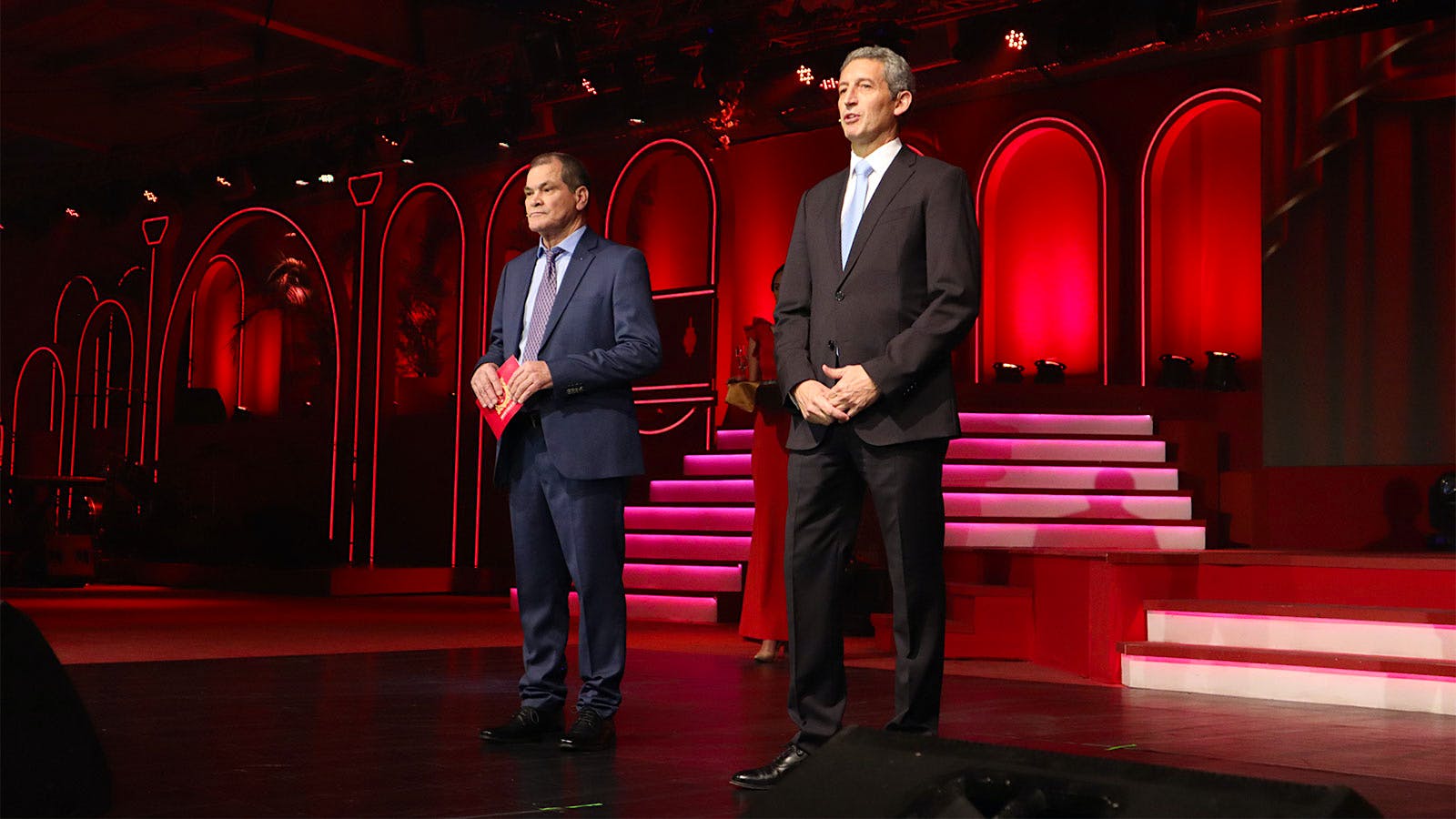 The second cigar of the evening was another new size in the Línea de Oro line, the Dianas (5 3/4 by 52) followed by the Nobles (5 3/8 by 56), completing the line. The final cigar of the night was a Romeo Churchill (7 by 47). Commonplace, perhaps, when compared to the gilded luster of the new Línea de Oro, but undoubtedly the most emblematic size of the brand.

The tone of the evening quickly changed from sentimental to electric when the humidor charity auction began. It’s an annual tradition where one-of-a-kind humidors filled with rare and classic cigars are auctioned off to international collectors, vendors and distributors, with all the proceeds going to the Cuban healthcare system. 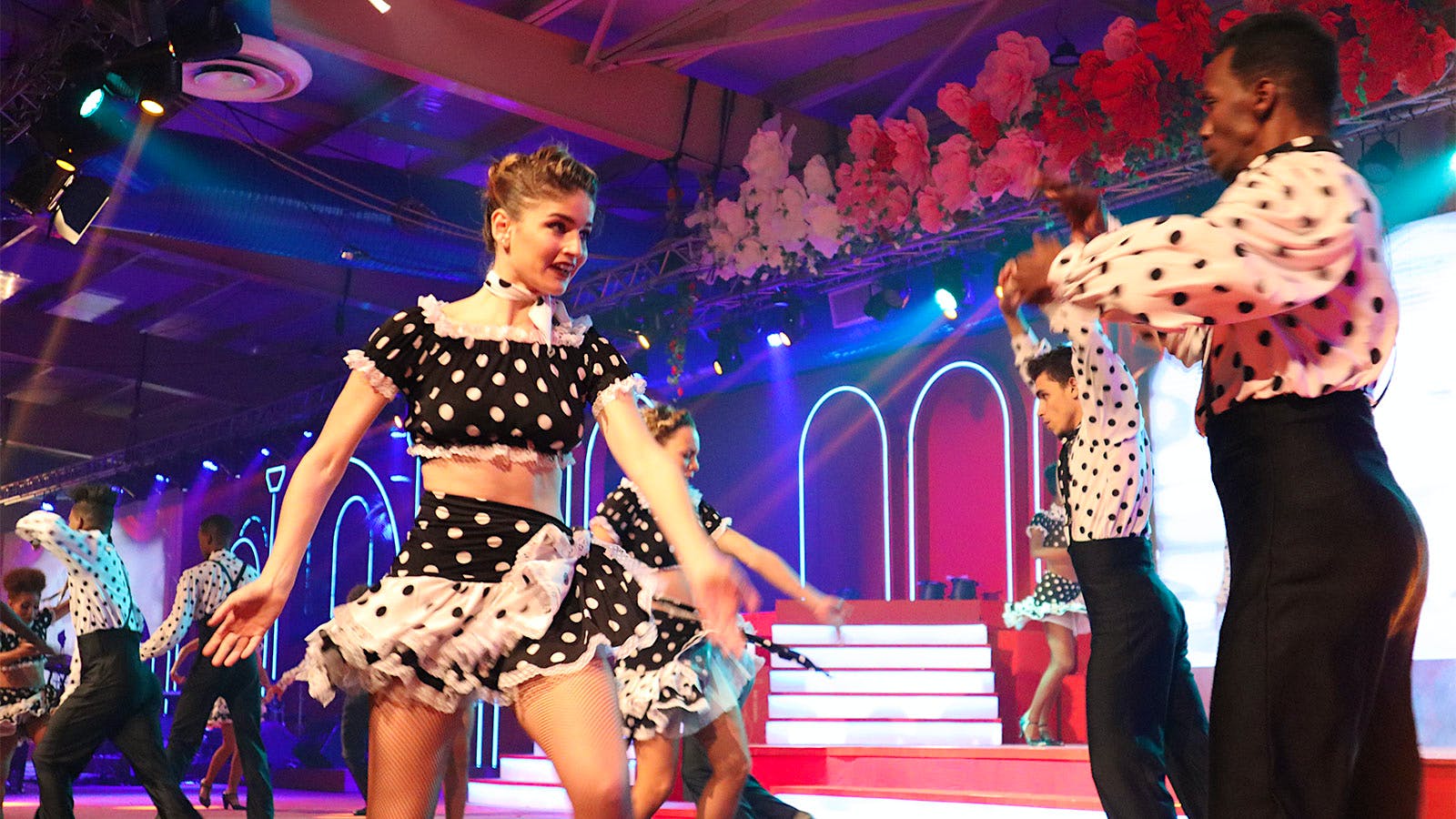 This year, the auction was conducted by Dalia Padilla and assisted by María Eugenia Álvarez, both from the famed Christie's auction house, and both with extensive experience in auctioning fine art.

Cigar fans might remember when Hunters & Frankau released the Ramon Allones humidor commemorating the U.K. distributor’s 225 years in cigar importation. This was an unexpected, last-minute addition to the auction, and was donated by the family of the late Simon Chase, who used to lead these auctions before he passed away in 2019. 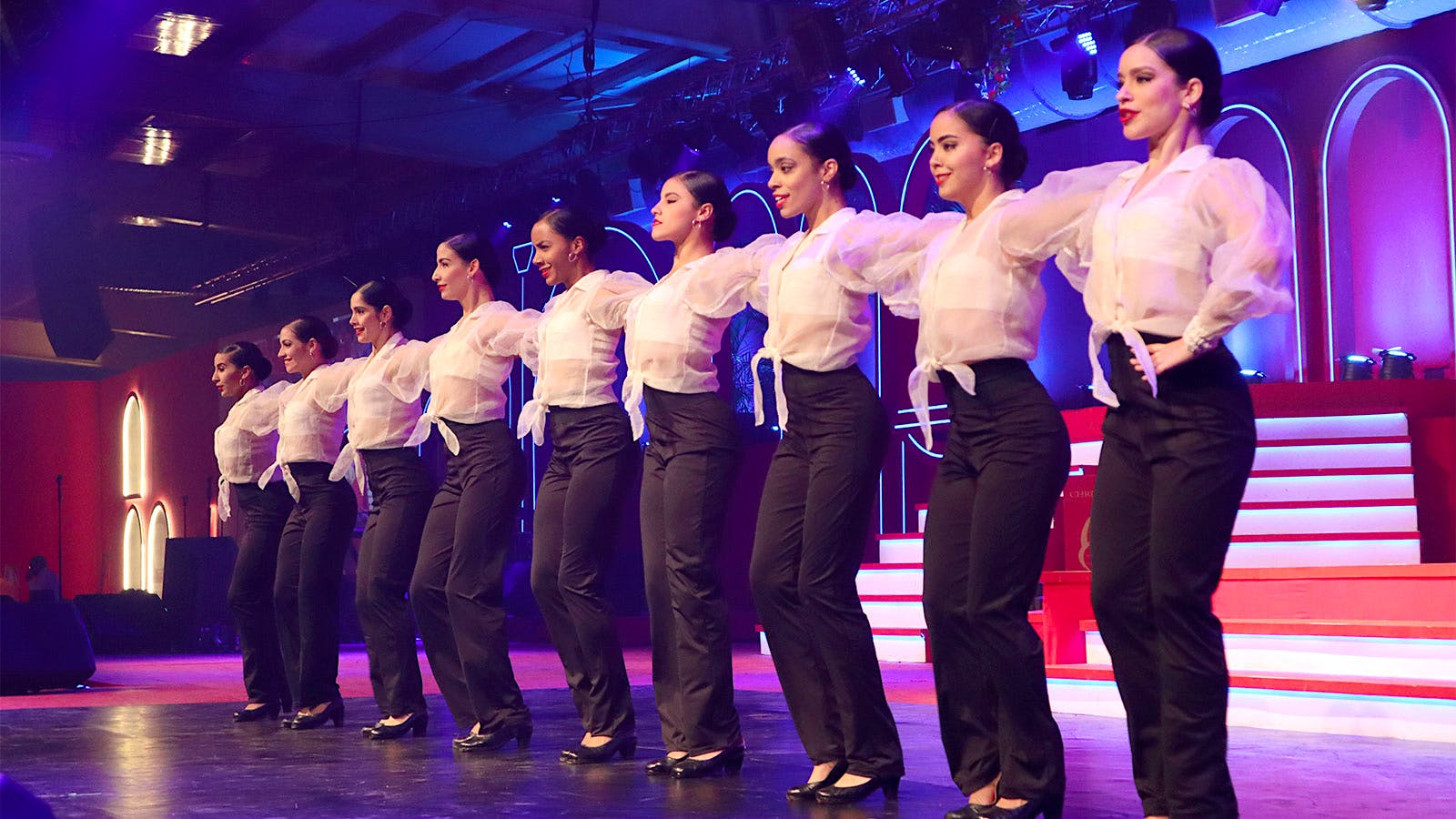 It was the first auction item of the night, and it came with four boxes (100 cigars) of a unique Ramon Allones belicoso made with a 109-style “drop head” (cabeza tumbada), as well as a bottle of Havana Club rum especially blended for this package, plus an extra box of Ramon Allones petit coronas from the 1970s. Upon release five years ago, the suggested retail price for the humidor was £4,275 ($5,480), but on this particular evening it drew a tremendous interest from the audience, with heavy bidding from the room. In the end, it sold to Li Thet from China for 380,000 euros ($425,000). The auction was off to a promising start. 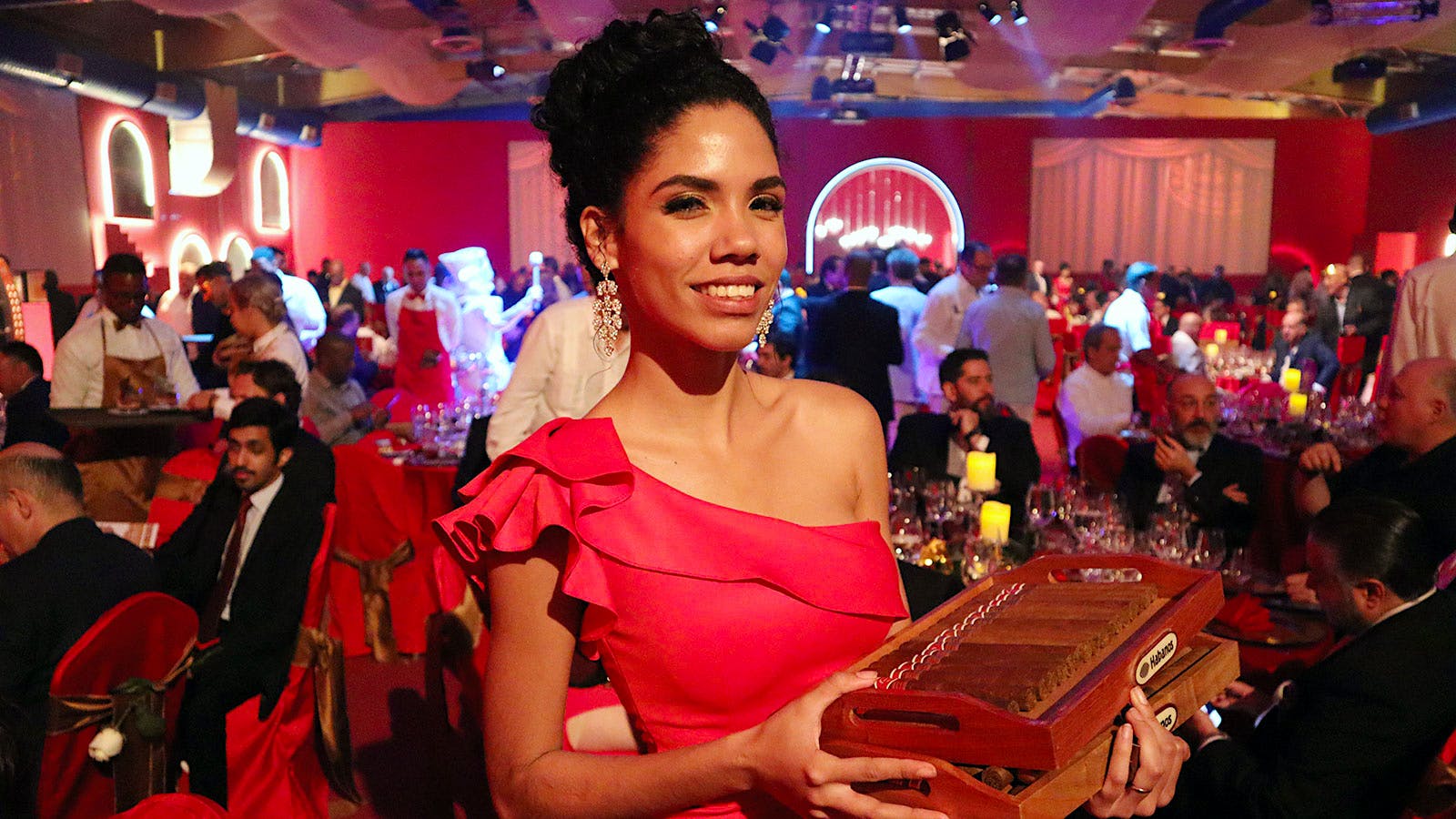 An ambassador of the evening passes out Romeo y Julieta Churchills to each guest, the last cigar of the night.

Padilla moved to the next lot, a Romeo y Julieta humidor designed to resemble an antique writing desk and a cigar-rolling table. It came with 380 cigars, including 40 of each size of the new Línea de Oro, which won’t be on sale for some time, as well as a bottle of Reserva del Mamut brandy. The lot went to Sun Yang of Beijing, and like the previous lot it also sold for 400,000 euros ($447,000). 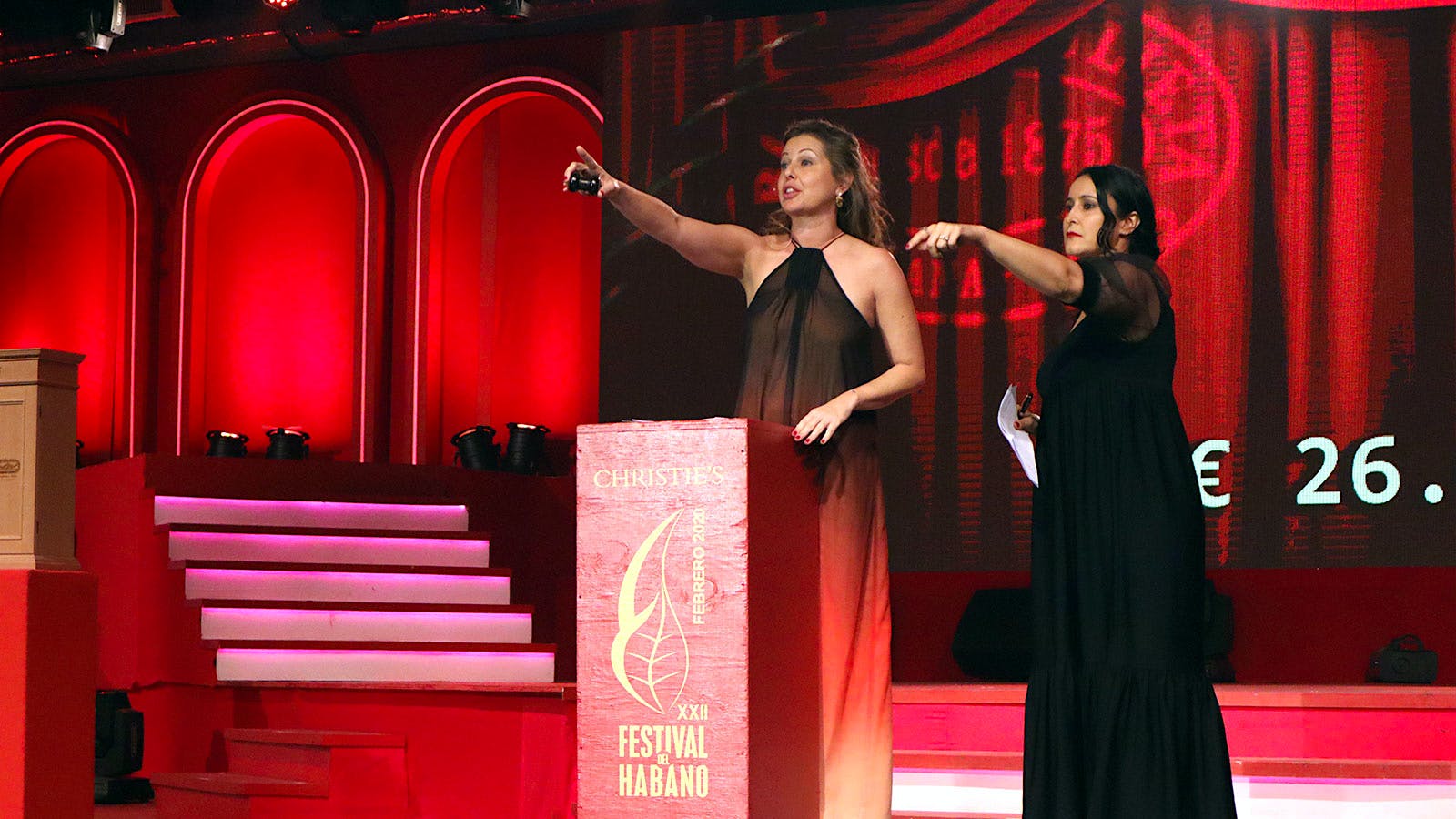 The auction starts as Dalia Padilla of Christie's steps up to the podium and starts the bidding with her colleague María Eugenia Álvarez.

The Montecristo humidor came next, and it is literally an open book. Full of 450 cigars (including 20 Maravillas and 50 Herederos), the mahogany humidor resembles an open volume of an old tome, a literary nod to Dumas’ “The Count of Montecristo.” Thet took that humidor as well for a winning bid of 420,000 euros ($470,000).

The bidding was aggressive all night, but despite the high bids of previous lots, the room was stunned by what came next. Habanos history was made on the final lot, a curvy, convex, five-foot-tall cabinet of 550 Cohibas. Sleekly made in Cuba with cigar drawers from top to bottom, the humidor contains rarities such as 30 Majestuosos 58, 20 Behike BHK 52, 20 Behike BHK 54, 20 Cohiba Edición Limitada 1966 and 50 Novedosos. As a bonus, the lot also came with a bottle of Havana Club 1519 Cuban rum, made from what Habanos says is “from the oldest and rarest rum reserve on the island.” 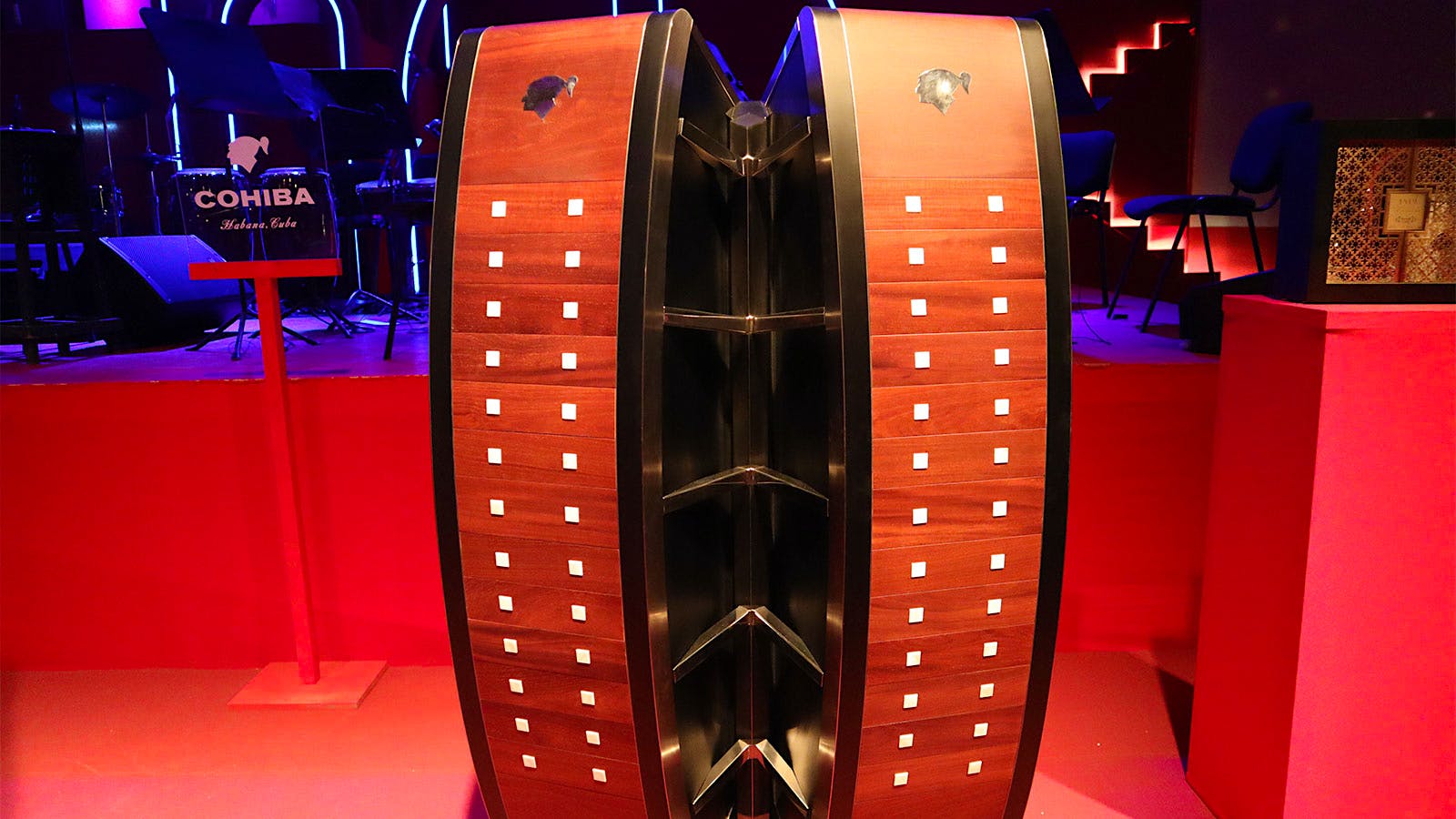 It's the Cohiba humidor that broke all the records, commanding 2.4 million euros, showing the big buying power and generosity the Festival can generate.

A spirited bidding war took over the room, and the audience roared in shock and pleasure when the lot reached 1 million euros—the first time any humidor ever reached the million euro mark. Almansoori was one of the parties fighting to take home the night’s most prized trophy, but when the bidding concluded at 2.4 million euros—by far the most ever bid for an auction lot in the history of the Habanos Festival—it was Thet who had his hand in the air. The winner of the first lot returned to the auction to take home the last. 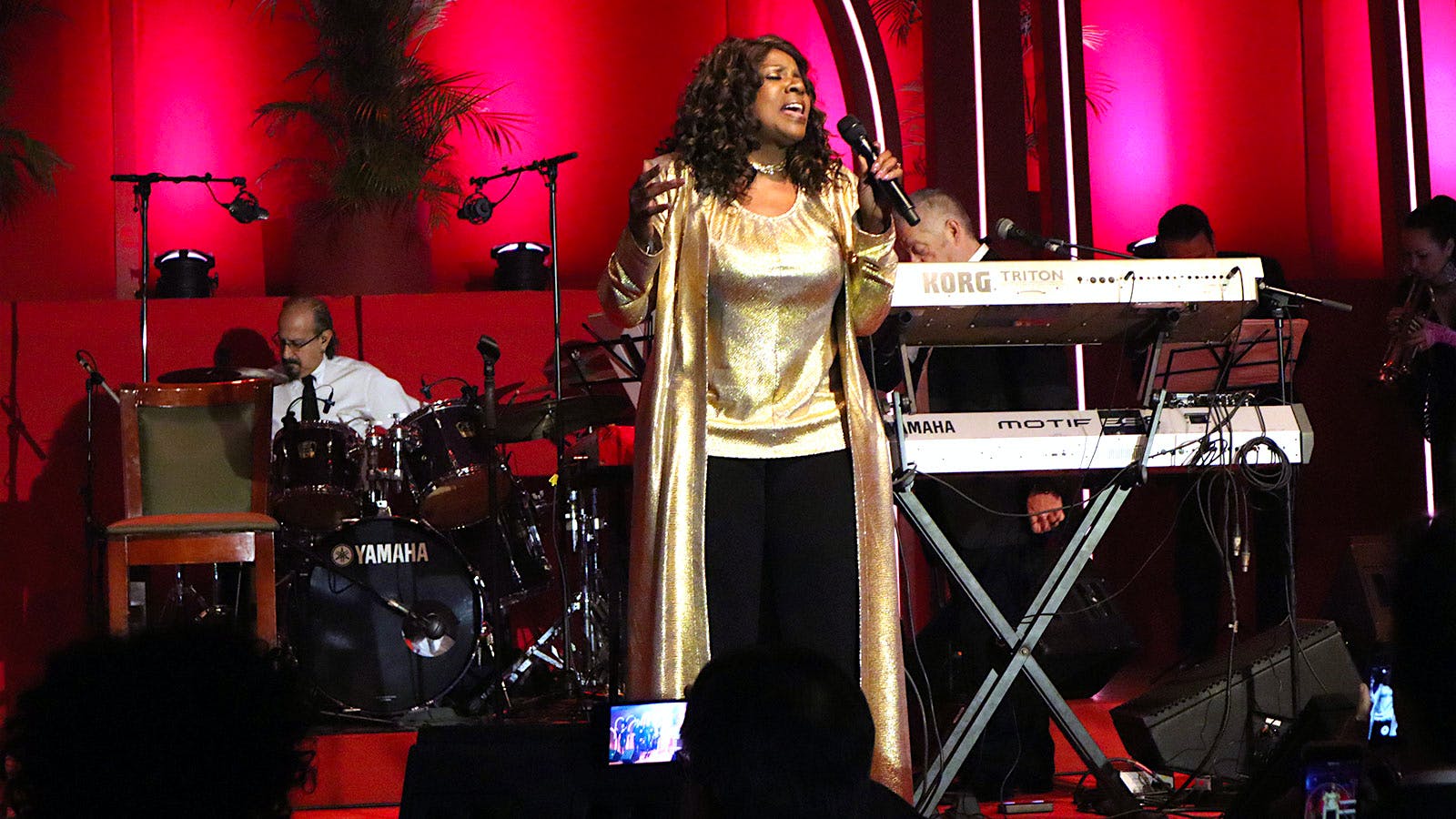 After all these years, Gloria Gaynor still sounds fantastic. She closed the festival with a smoking, late-night concert.

As the clocks approached 1 am, the party wasn’t even close to ending. Tuxedo jackets came off, ties were loosened, and disco icon Gloria Gaynor took the stage, opening her late-night concert in Havana with the song “Goin’ Out of My Head.” Of course, she covered most of her standards into the early morning and was sure to sing the disco anthem “I Will Survive,” which topped the charts in 1978. More than 40 years later she still sounds fabulous.

As the guests filed out of the hall, they were handed gift bags containing a sample box with all three sizes of Romeo y Julieta Línea de Oro. The XXII Habanos Festival ended with a flourish, and was a night few would soon forget.