It’s a difficult thing to balance retro and modern aesthetics at the same time, but S.T. Dupont seems to have pulled it off with its latest Ligne 2 lighter, which reaches into the past for its design inspiration. At the International Premium Cigar & Pipe Retailers trade show this summer, the luxury accessory maker debuted a new soft-flame lighter called Fire Head Under Lacquer, inspired by the company’s Diamond Head lighters from the 1950’s.

At first glance, the rectangular shape of the lighter is instantly recognizable as a Ligne 2. This style of lighter, measuring 2 1/2 inches tall by 1 1/2 inches wide, is celebrated among cigar smokers for its soft flame, flint-wheel ignition and distinctive “ping” sound when opening the cap of the lighter. It’s also satisfyingly heavy—made from solid brass and coated with a palladium finish.

But the new model adds an interesting design element that‘s never been seen before on a Ligne 2: A triangular guilloche pattern that’s topped with layers of deep-blue lacquer. According to S.T. Dupont, the precise, machine-made geometric pattern is a tribute to the company’s Diamond Head lighters from long ago, which were notable for their diamond-shaped engravings. The modern twist—applying lacquer to the guilloche—is a process the company says takes months to complete, involving many applications of lacquer and repeated polishing. The end result is a lighter that is both visually impressive and smooth to the touch.

But how does Fire Head Under Lacquer perform as a cigar accessory? Cigar Aficionado fueled up the luxury lighter and took it out for a test drive—first in our cigar lounge, then around New York City. 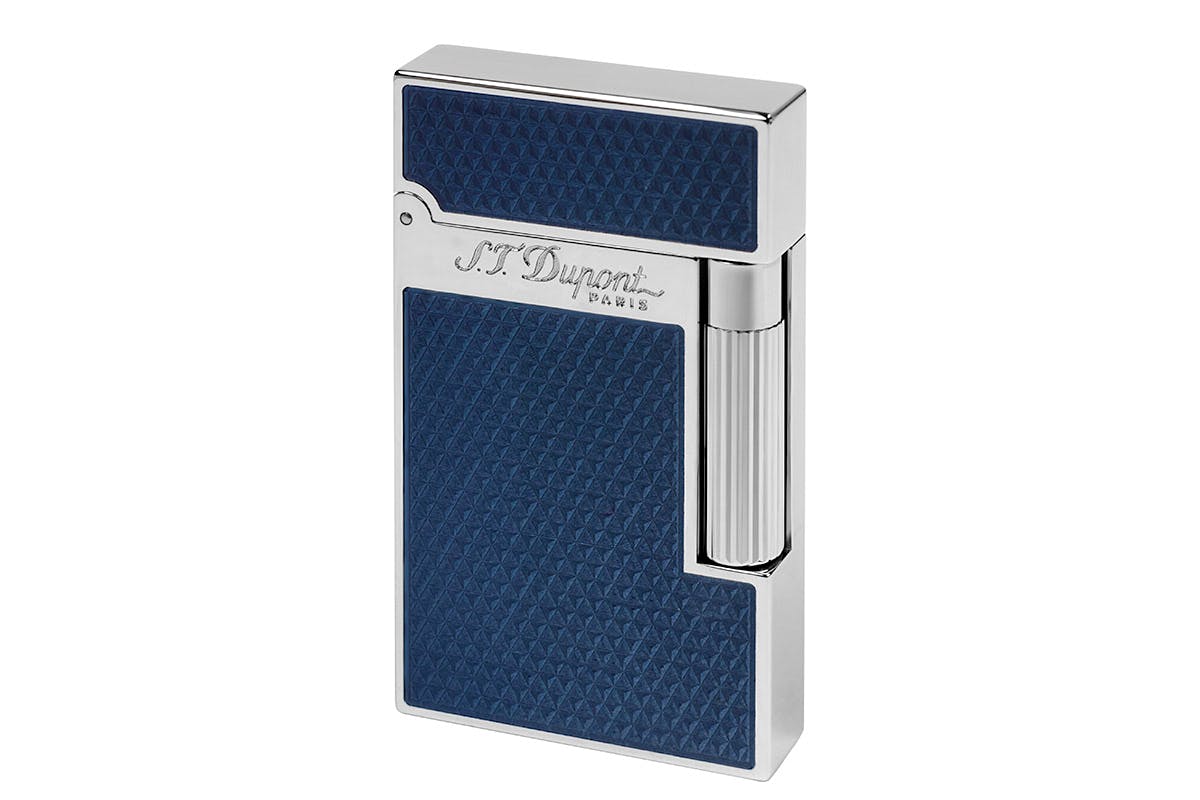 Over multiple experiments, we found that the lighter works best in a controlled, indoor environment like a cigar lounge. Its gentle soft flame had no trouble lighting up a range of different sized cigars, from elegant lanceros to big ring-gauge grandes.

Smoking outside with the Fire Head Under Lacquer was a bit more of a gamble. On a casual stroll through the city, the lighter performed well, but its flame tends to flicker in windy conditions. On calm afternoons and peaceful evenings, however, the lighter is a strong performer, toasting and lighting cigars without issue.

Overall, Fire Head Under Lacquer excels in its luxury presentation, and is a useful accessory for lighting up your finest smokes. It’s in stores now, with a retail price of $1,169. The lighter is manufactured in France, and distributed by Davidoff of Geneva in the United States.

To learn more about Fire Head Under Lacquer and find a S.T. Dupont retailer near you, visit st-dupont.com.