To get to Cigar Point, a cigar and whisky lounge in Mexico City’s Roma neighborhood, you first have to traverse the culinary obstacle course that is the ground floor of the Mercado Roma. Take your time and browse the offerings of tacos, barbeque, seafood and gelato as you navigate to the back-right of the food court to the elevator. Press “two” to get to the beer garden and to the cigar lounge. Take two rights out of the elevator to an unassuming glass door. Enter and you’ll see the walk-in humidor right in front of you.

Cigar Point opened in June of 2016 and offers a limited selection of Cuban and non-Cuban cigars. On this visit, the Partagás Serie D No. 4 (at about $22) beckoned, but only after long consideration of the Bolivar Belicoso Fino and the Trinidad Vigia.

“Here we sell about 70 percent Cuban cigars,” explained Roger Montoya, the general manager of Cigar Point. Montoya said that some of his favorites were not available at the moment, but that they’d come in soon. Still, with a Hoyo de Monterrey Epicure No. 2 or Montecristo Double Edmundo to choose from, guests are not without good options. 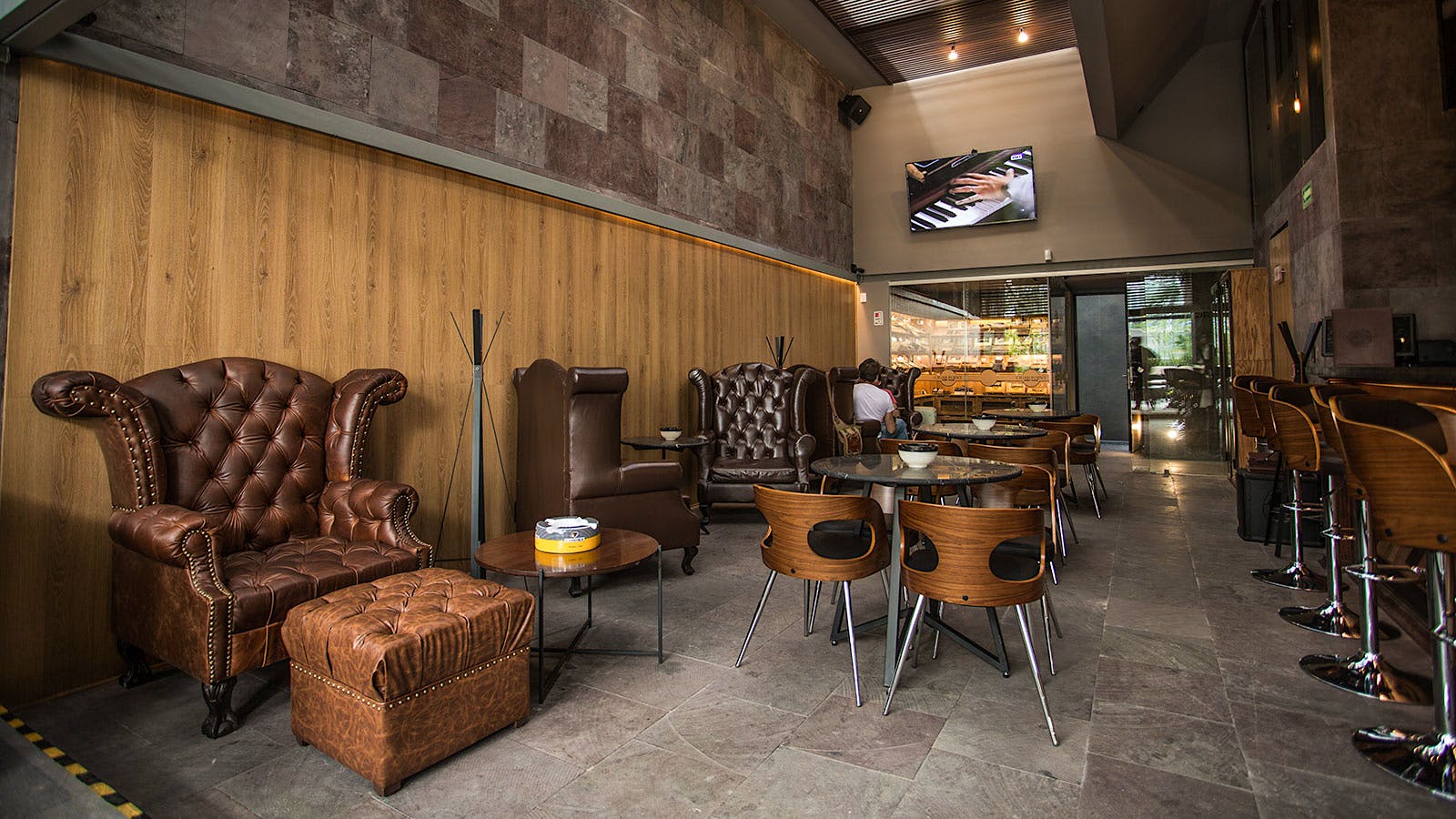 Indoors, there are about 16 comfortable seats and a large TV.

The Cuban selection was rounded out by Partagás Serie P No. 2 and Serie D No. 5; Punch Punch 48; various shapes of Montecristo Open; a Montecristo No. 4; a couple of Romeo y Julietas and a H. Upmann Magnum 50.

Pick your favorite and walk into the lounge. The bar to the left has a vintage photo of Jack Nicholson with spiked hair and blowing a smoke ring from his cigar. Another image of Jack hangs to the left of the bar. That’s about it for artwork, save the small model of a 1950s Chevy with a Cuban flag on its door. 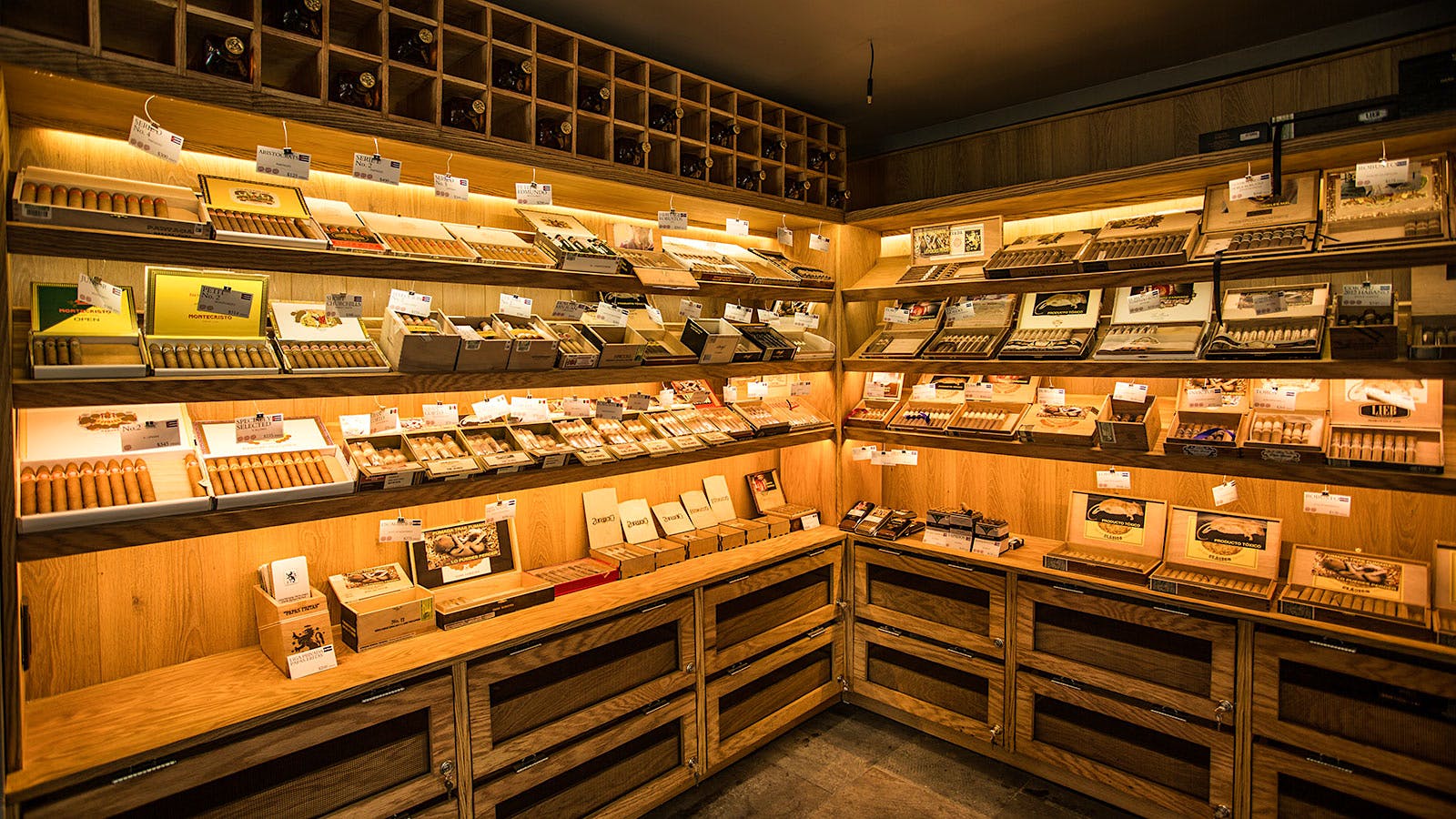 The walk-in humidor is stocked with a variety of Cuban and non-Cuban cigars.

With more than 300 spirits at the bar, choosing a drink to pair with your cigar becomes a real labor of love. The menu is divided by type of liquor and has more Tequila and mezcal than you likely ever considered. Scotch and rum are also featured. A map of the Scottish isles with arrows pointing to the proper brands helped choose a single-malt. Jura Superstition is on the top left at about $11. Ardberg belongs to the Islay arrow and goes for about $13. The “Glens” are well represented, from Glenfiddich 12 to 21 years old to Glenmorangie and back to Glengrant Major at about $21 a pour. Macallan 12 to 18 are available.

The U.S. liquor list was relatively sparse, but had Woodford Reserve ($10) and Buffalo Trace ($9) on it. The rum list is impressive, with a range of Flor de Caña—from Flor de Caña 4 Extra Seco to Flor de Caña 25 (the latter being more Cognac-like at $48 a pour). If you haven’t tried the Havana Club Selección de Maestros, start there. There are many Mexican beers, but also some Belgian dubbels and quadrupels available, as well as well as two dozen cocktails.

In a couple of ways, Cigar Point is really two lounges in one. It’s as much a whisky bar as a cigar bar, and it offers both an indoor area and an open-air terrace. 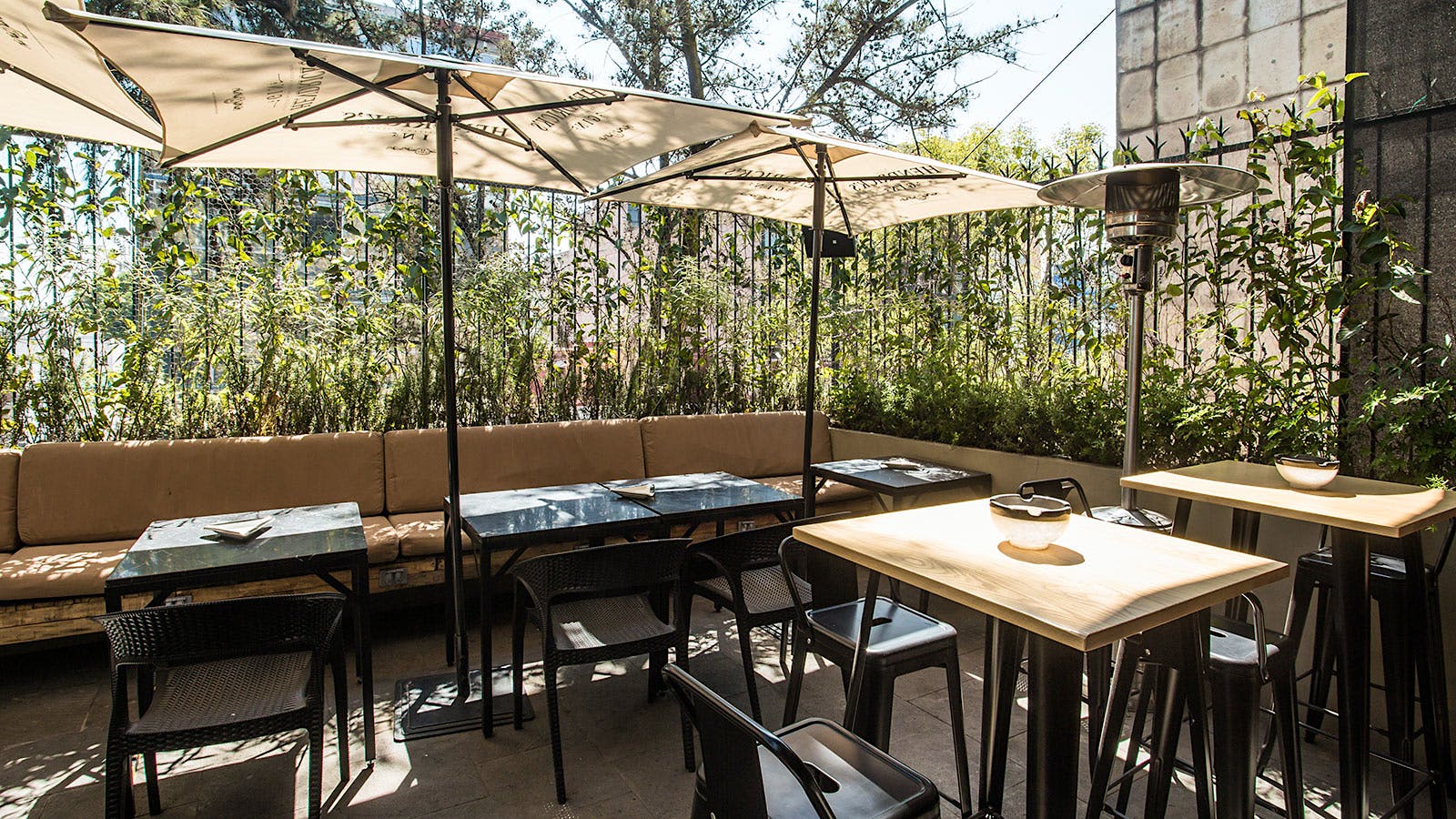 A leather couch and several tables seating about 20 offer comfort out in the open.

Indoors, there are about 16 comfortable, some overstuffed, seats. The lounge has excellent ventilation. There is a TV showing boxing and soccer. A second TV is on the terrace as you enter it. A leather couch and several tables seating about 20 offer comfort out in the open. A glass door divides the inside from the terrace, but it’s usually kept open. There are proper cigar ashtrays on the small tables, most of them displaying cigar brands.

Cigar Point does not charge a cutting fee and invites guests to bring their own cigars. Cigarette smoking is allowed and food is available from a menu that draws on some of the neighbors downstairs. Paella anyone? Pair it with an Hoyo Epicure No. 2 and an Ardberg single-malt. Montoya said that the busiest times for the lounge were before dinner, starting around 5 p.m.