Carson Serino is the vice president of Serino Cigar Co., a company headed by his father Anthony Philip Serino. The father-and-son team launched Serino Cigar Co. in 2016, after meeting Omar González-Alemán, owner of the La Corona Cigars, S.A. factory in Estelí, Nicaragua. Together, they blended Serino Royale, the company’s first cigar line. Now Carson has stepped forward within the company to introduce his own blends and brand concepts, launching a cigar line called Wayfarer, in 2017, and another brand called Taíno, which debuted last year.

The 29-year-old Serino recently spoke with Cigar Aficionado assistant editor David Clough about his introduction to the cigar industry, his tobacco blending philosophy and his plans for a new cigar project with Jochy Blanco of Tabacalera Palma in the Dominican Republic.

Cigar Aficionado: How did you get started in the cigar industry?
Serino: I began working with [APS Distributors, LLC, his father’s warehousing and distribution company] while I was in middle school. My father would pick me up from class and I’d head to the warehouse to help in the packing room until daily shipping was over. I can definitively tell you I was not interested in cigars during this time.

Q: Tell me more about your father’s company. When did he start APS Distributors, LLC?
A: APS Distributors, LLC stands for Anthony Philip Serino. It was formed in the mid 2000’s. My father offers a wider variety of his own blends and products to retailers. He produces a long list of retailers’ house brands. And he imports, warehouses and distributes [cigars] for other manufacturers.

Q: Where is APS Distributors located?
A: Pompano Beach, Florida.

Q: What finally got you interested in cigars?
A: My father opened a members-only retail lounge named My Cigar Club next to APS. I began working there while in high school. I’d say this is where I became interested in cigars. The beautifully ornate brands, the members, the romantic mystique of cigars neatly presented on the shelves began to win me over.

Q: How did the idea of creating your own cigar brand come about?
A: My father met Omar González-Alemán through mutual friends in Nicaragua while I was attending Florida State University. It coincidentally happened while my father and I were developing the idea of jointly building a high-end premium brand.

Q: Can you tell us more about González-Alemán?
A: Don Omar’s background in cigars is extensive. He was born and raised in Cuba. He began his career at a young age as his family was involved in farming and the raw material side of the industry. Wanting to gain a complete understanding of the cigar-making process, he became an assistant at the Partagás Factory.

Q: Where did he go from there?
A: After a long tenure at Partagás, Don Omar was hired as a director at the La Corona Factory in Havana—one of Cuba’s largest factories.

Q: And after he left Cuba?
A: After his time at La Corona, Omar moved to Costa Rica and then to Nicaragua, where he established his farm and factory, La Corona S.A., paying tribute to the Havana factory where he garnered his invaluable experience.

Q: You met him in Nicaragua, correct?
A: We were touring factories, intent on developing the Serino brand. My father and I both flew down to Estelí to tour La Corona and discuss our brand values. We knew immediately that Don Omar was the right person to build the Serino brand with. His operation is vertically integrated, the rollers are highly skilled, all the bunches are crafted by hand without the use of a Lieberman machine. Most importantly, Omar is as passionate about quality as we are. 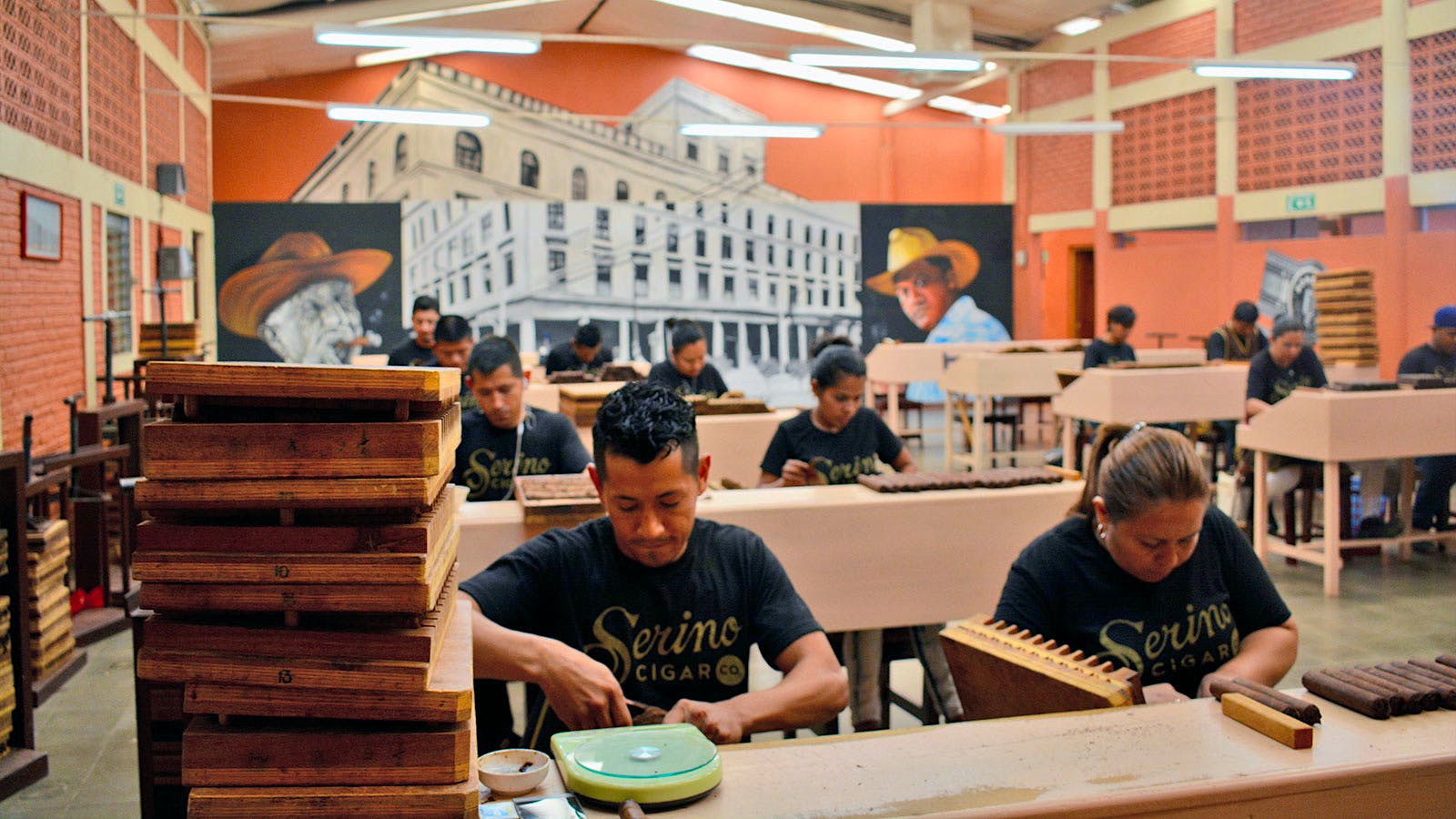 Q: So you knew it was a good fit?
A: Everything felt right, everyone felt like family. I feel immensely blessed to be working with Don Omar, his son Luis Omar, and the La Corona Family.

Q: How many rollers at the factory work on Serino brands?
A: Twelve pairs.

Q: When did Serino officially launch?
A: We launched Serino Cigar Co. at the 2016 IPCPR.

Q: What were your debut brands?
A: We debuted the Serino Royale line, which consisted of four blends: an Ecuadoran Connecticut, the Medio [a cigar rolled with an Ecuadoran Habano Claro wrapper], the Maduro and the Maduro XX.

Q: Your father and Omar González-Alemán created these cigars?
A: Yes.

Q: So, at this point, you were still learning how to blend tobaccos?
A: Yes, during this time I used the opportunity as a learning experience.

Q: What was the first cigar that you helped blend?
A: Our Wayfarer line.

Q: Let’s talk about Wayfarer. How did you come up with this cigar?
A: Wayfarer was conceptualized during a two-week backpacking trip in Iceland. I planned on bringing cigars with me for the trip, but upon arrival I realized I left my travel humidor behind. I then sought out several Cuban cigars from the duty-free shop and the single tobacconist in downtown Reykjavik. This wasn’t my first experience with Cuban blends, but it was the first time that it was all I smoked for an extended period. After returning to the states, I flew down to La Corona to create a blend inspired from the smokes I had on my trip.

Q: So you created a blend to fit the concept?
A: A new blend usually comes by way of a narrative. I believe you should blend with purpose and that every cigar has a story to tell. This also helps me identify the style of blend to start crafting.

Q: What tobaccos did you choose for Wayfarer?
A: An Ecuadoran Corojo '99 wrapper, a Nicaraguan Jalapa Criollo '98 binder and a Criollo '98 and Corojo '99 filler blend [from] three regions: Condega, Jalapa and Ometepe.

Q: Specifically, what elements do you look for when you’re creating a cigar?
A: There are characteristics in a cigar that I believe every well-rounded blend should consist of. They are: balance, complexity and vibrancy. Balance and complexity go hand in hand. I believe a cigar should have a strong core group of flavors yet have a clean finish. Next is vibrancy. Does the blend grab your attention and keep it? Does it deliver a memorable experience from beginning to end? A good cigar should do both.

Q: Last year you introduced a brand called Taíno. What’s the narrative behind this cigar?
A: The Taíno blend was developed to pay homage to the indigenous tribes of Hispaniola and the Caribbean islands that many historians believe was the origin of tobacco culture. It’s a special project for me because I feel our industry uses a lot of ephemera from their culture but no one has quite paid homage to the people.

Q: So the cigar is a tribute to the Taíno people?
A: After doing independent research as well as studying their culture at more formal places such as Centro León in the Dominican Republic, these people should be remembered and celebrated. The Taíno were easy-going, yet rich in character and laid the foundation for what cigars are today. I tried to convey what I learned about their culture as authentically as possible via the blend, design and packaging.

Q: And what’s the tobacco blend of Taíno?
A: The wrapper is Ecuadoran Habano 2000 Medio, the binder is Condega Corojo '99 and the filler is Corojo '99 Estelí, Criollo '98 Jalapa and Criollo '98 Ometepe.

Q: Who is your target audience?
A: Being a newer brand and using social media as one of our primary avenues of exposure, we naturally have a younger consumer. I’d say between the ages of 25 and 45, albeit I don’t believe our product is solely for the young consumer. I believe we have a cigar within our portfolio for everyone. Younger smokers are just more apt to try something new. I know if an older, experienced smoker were to try our brand he would be satisfied with the quality.

Q: Are Serino Cigars sold outside the United States?
A: We do sell internationally. [Serino Cigars are sold in] Switzerland, Holland and the Dominican Republic. We are looking to expand this year as we plan to make our InterTabac [European tradeshow] debut.

Q: Are you working on any new projects?
A: Yes, I’m currently in the process of developing a blend with Jochy Blanco of Tabacalera Palma. Jochy has a first-class inventory of tobacco and I’m excited to be able to work with it. We’re hoping it will be ready in time for this year’s IPCPR.

If there is a humidor-maker to the stars, it’s probably Daniel Marshall. Self-taught with a talent …