Americans will no longer be allowed to come back home with Cuban cigars, Cuban rum, or to stay in Cuban hotels, President Trump announced in a White House speech today. New U.S. sanctions leveled against Cuba have removed the permission for Americans traveling abroad to return with Cuba’s most famous exports, and also ban future U.S. travelers from staying at any government-owned hotels on the island—a restriction that essentially forces all future U.S. visitors to stay in Airbnb-style lodgings in private homes, since the Cuban state holds full or majority ownership in all Cuban hotels.

The regulations issued today by the Treasury Department’s Office of Foreign Assets Control (OFAC) stated that OFAC was amending authorizations, issued during the Obama administration, “to exclude the importation into the United States of Cuban-origin alcohol and tobacco products” that had previously been allowed into the country in “accompanied baggage” for personal use.

As part of the Obama administration’s policy of “positive engagement” with Cuba, restrictions on buying Cuban cigars were eased considerably. Under Obama-era policies, Americans could bring back up to 100 cigars (or four boxes) duty-free, no questions asked, from almost any country in the world, as long as they were for “personal use” and not commercial re-sale. Travelers with more than 100 cigars were subject to taxation, and excessively large amounts were deemed to be “commercial quantities,” although the exact number that constituted a commercial quantity was never explicitly defined by OFAC. 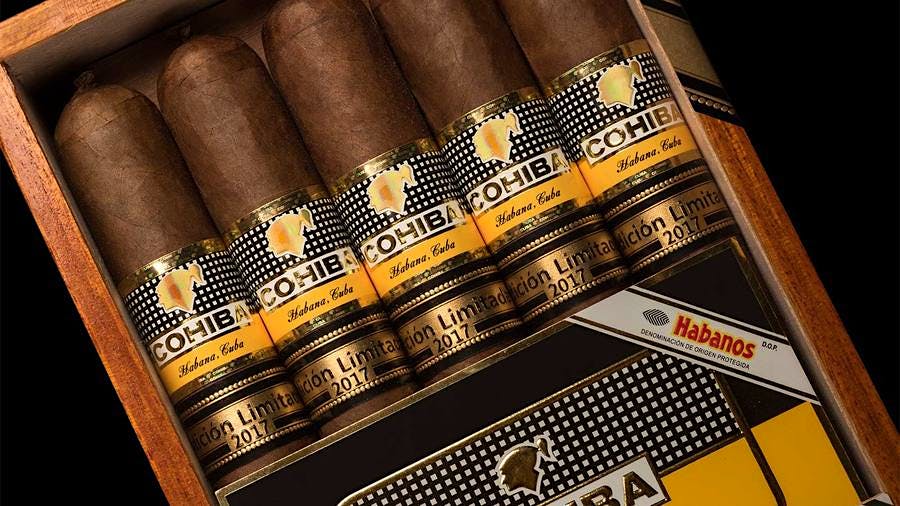 One of the most prestigious Cuban cigar brands, Cohiba, will again be off limits to Americans.

The new regulations not only prohibit the importation of cigars and rum for Americans who travel to Cuba, but prohibit their importation into the United States after being purchased from Cuba or any other country that maintains free trade with Cuba, such as Canada, the United Kingdom and Mexico. (The purchase of Cuban cigars and rum via mail-order or the Internet by Americans has long been banned, and remains illegal.)

As part of the new package of sanctions, the State Department also announced the creation of a “Cuba Prohibited Accommodations List” that will contain the names and addresses of Cuban hotel properties where U.S. citizens can no longer legally book a room. The new regulations state that “no person subject to U.S. jurisdiction may lodge, pay for lodging, or otherwise make any reservation for or on behalf of a third party to lodge, at any property in Cuba that the Secretary of State has identified as a property that is owned or controlled by the Cuban government, [or] a prohibited official of the Government of Cuba,” or close relatives of such prohibited officials.

Since the Cuban state holds at least a majority stake in all hotels on the island, today’s regulations effectively render them off-limits to U.S. travelers. State Department officials said today they had already identified 422 hotels and lodging properties for their list of prohibited accommodations.

The new sanctions will also eliminate a category of travel which has allowed U.S. citizens to go to the island for professional meetings and conferences, as well as the general authorization of travel to attend public performances, workshops, clinics, exhibitions and events. The new restrictions will curtail U.S. citizens from attending annual gatherings such as the popular Havana Jazz Festival or the famed Habanos Festival, described as “the most prestigious event in the world dedicated to premium cigars.” Future travel to the island for the purpose of attending meetings or events will now require an OFAC license.

Travel providers to Cuba were quick to denounce the Trump administration’s new restrictions. “The Cuban people are facing a tough economic situation due to a drop in tourism as a result of Trump Administration policies and the Covid-19 pandemic,” stated Collin Laverty, who runs Cuba Educational Travel. “There are still a number of ways for Americans to travel to Cuba legally, but these prohibitions will create more confusion and complications, resulting in less travel and more hardship for Cuban families.”

The new regulations are scheduled to be published in the Federal Register tomorrow, making them law. At present, international travel to the island is severely restricted and the Cuban tourism industry remains mostly shut down due to the Covid-19 outbreak.

Clarification
The original version of this story reported that purchasing Cuban cigars and rum had been banned. The letter of the new law specifically speaks to a prohibition on their importation back into the United States, and the story has been updated to make that clarification.