Share
Phoenicia Trading’s Casa del Habano at the Beirut airport is the largest of its kind, and a shop where some visitors spend upwards of $100,000.

It’s 8 a.m. in the VIP lounge at the Meliá Cohiba Hotel, and breakfast is being served. Although this is Cuba, smoking is prohibited here, but soon the familiar aroma of lit cigars meets the nostrils of an American. It’s coming from the back, and the waitstaff doesn’t seem to care. His curiosity overcomes him, and he walks toward the smoke, finding the back room filled with people he doesn’t know, all with fat cigars in their hands.

Who are these guys?

Turns out the morning smokers are from Phoenicia Trading A.A. in Cyprus. And while the average American cigar lover has little idea of who they are, these men are some of the biggest players in the Cuban cigar world. They smoke cigars for breakfast, sell more Cuban cigars than most other companies (ranking in the top three worldwide among Cuban cigar distributors) and they are the men behind some of the world’s most desirable Regional Edition smokes.

“They are huge in the cigar game,” says Ajay Patel, one of London’s top Cuban cigar retailers. “The collection they have is insane.”

The company is one of the world’s largest Habanos distributors, covering the Middle East, part of Europe (Greece, Malta, Cyprus and Ukraine) and most of Africa, 60 countries in all. Fernando Dominguez, chairman and CEO of Tabacalera Group, calls Phoenicia one of the world’s largest Habanos distributors, and one of its main commercial partners. “They were pioneers in developing the very first Casa del Habano walk-in humidor at an airport location around the world,” he says, “with events and activities that have become benchmarks when it comes to luxury goods as premium cigars.” One of those events will be the celebration for Cohiba’s 55th anniversary, which Phoenicia is hosting in May in a combination virtual and in-person event, complete with the launch of the new Cohiba 55 limited-edition cigar.

Phoenicia, named for the ancient traders of the Mediterranean, is run by chairman Mohamed Zeidan, 74, and chief executive officer Walid Saleh, 54. Both men frequent the Meliá Cohiba on their many travels to Cuba. Zeidan has been to Cuba too many times to count. “I used to come four times a year. Until 2005, I came to Cuba 125 times,” he says. “After that, I stopped counting.” His first visit was back in 1979. 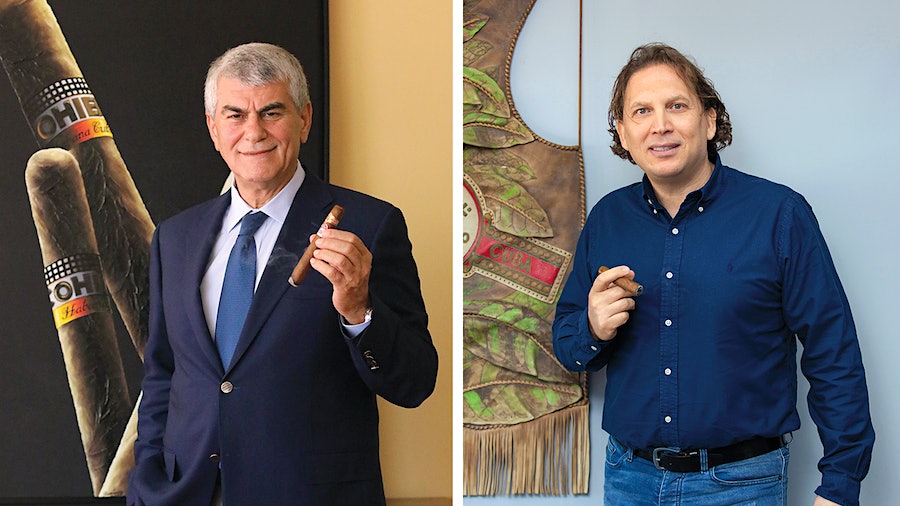 The company marked 40 years in business in 2019. To celebrate, it created the Ramon Allones Phoenicio 40, a limited-edition smoke measuring 6 1/2 inches long by 54 ring packed in Elie Bleu humidors, each holding 40 cigars and retailing for up to $24,000. Standard boxes followed.

Of course, few are traveling to Cuba right now, as the world remains in a pandemic. While the virus has increased cigar demand, it has squelched travel, cutting into Phoenicia’s business. “In normal years, we were selling 13 million to 14 million sticks,” says Saleh, sitting in a conference room in Cyprus, where the company makes its headquarters. The company sold around 10 million cigars in 2021 as local sales rose while duty-free sales (which usually account for 70 percent of revenues) dropped. Saleh expects things to normalize in the second half of 2022.

Phoenicia’s crown jewel is its store in the Beirut airport, what it calls the largest duty-free Casa del Habano in the world.  “Around 430 square meters [4,600 square feet],” says Saleh. “There is a regular humidor, there is a vintage humidor and there is a cigar lounge.” Members can access the lounge, drink, dine, smoke and kill some time before flights. “Some passengers they come three hours before their flight, four hours before, just to sit down there and have a cigar,” says Saleh. Some visitors have enjoyed the experience so much they missed their flight.

The duty-free is not the typical store. For one, you can’t buy a single cigar, only by the box. A “normal” purchase might be $1,000, and it’s not uncommon for someone to spend $100,000 or more. “A lot of passengers come with their private jet, buy their cigars in Beirut and fly back,” says Saleh. 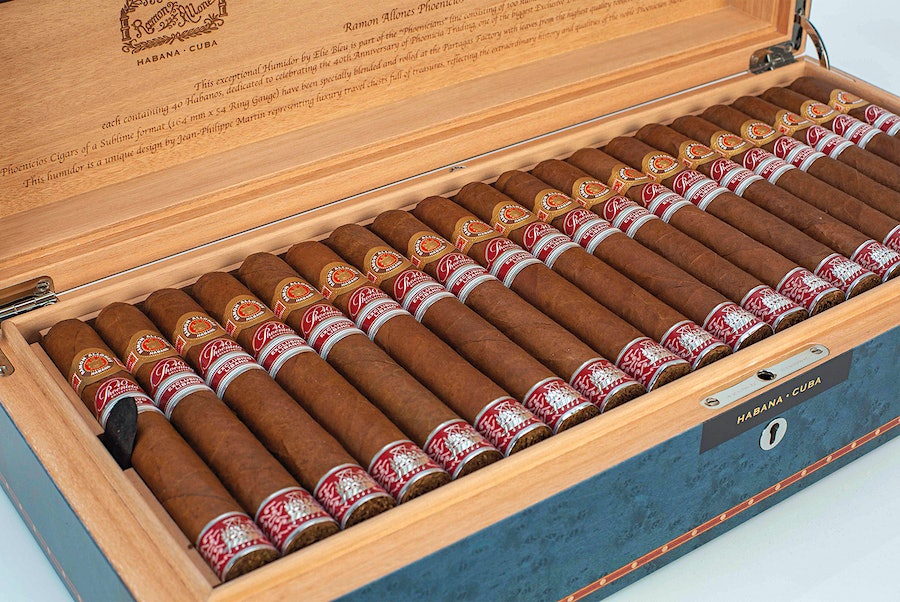 One of the company's newest specialities, the Ramon Allones Phoenicia 40, in its elaborate Elie Bleu humidor.

Phoenicia has also been dealing with shortages of Cuban cigars as the pandemic has impacted Cuba’s ability to keep up with demand. Zeidan has long believed in carrying a massive inventory—standard is one and a half year’s worth of cigars—keeping the company supplied. The inventory is smaller than normal as limited shipments have forced the company to dip into its reserves. “We are lucky we have a huge level of stock,” says Saleh. “Partagás Serie D No. 4, for example, which is one of the top-selling items, usually we have 300,000 sticks in stock. Nowadays, even with the D4, I have maybe one or two months in stock.”

Saleh has been in the business for 30 years, enough to witness sea changes in the buying habits of consumers. “In the old days, Churchills, double coronas were the best-selling cigars. So now, the demand in our territory is in the big ring gauge cigars.” In addition to the ubiquitous Partagás Serie D No. 4 and the all-but-impossible to get Cohiba brand, Saleh points to the demand for Romeo y Julieta Wide Churchills, Hoyo de Monterrey Le Hoyo de Río Secos and other fat cigars. “Everything 54 [ring gauge] and above is in high demand.”

In addition to having a preference for fatter cigars, the Phoenicia folks have an affinity for larger boxes. “The first Regional Edition for us was a cabinet of 50,” says Zeidan. “They age better, and it’s better for the cigar; that’s why I prefer to go to 50. If you are cooking at home, to make the food, if you make it in a big bowl for a family it tastes better than one or two.”

For all their treasures, for all the cigars they sell, there is one item that won’t get a price tag. The company still has one original Behike humidor, which was made for  Cohiba’s 40th anniversary. “We have one left,” says Saleh. When asked if Phoenicia would sell it, he just smiles. “No.”