The newest feature from Cigar Aficionado poses a question cigar lovers ask each other every day: “Which is your favorite?” Beginning with this issue, we’ll be putting that question to aficionados from all walks of life—old friends as well as new faces. Join us as we start a conversation around our shared passion. Look for My Favorite Cigar in each issue of the magazine. 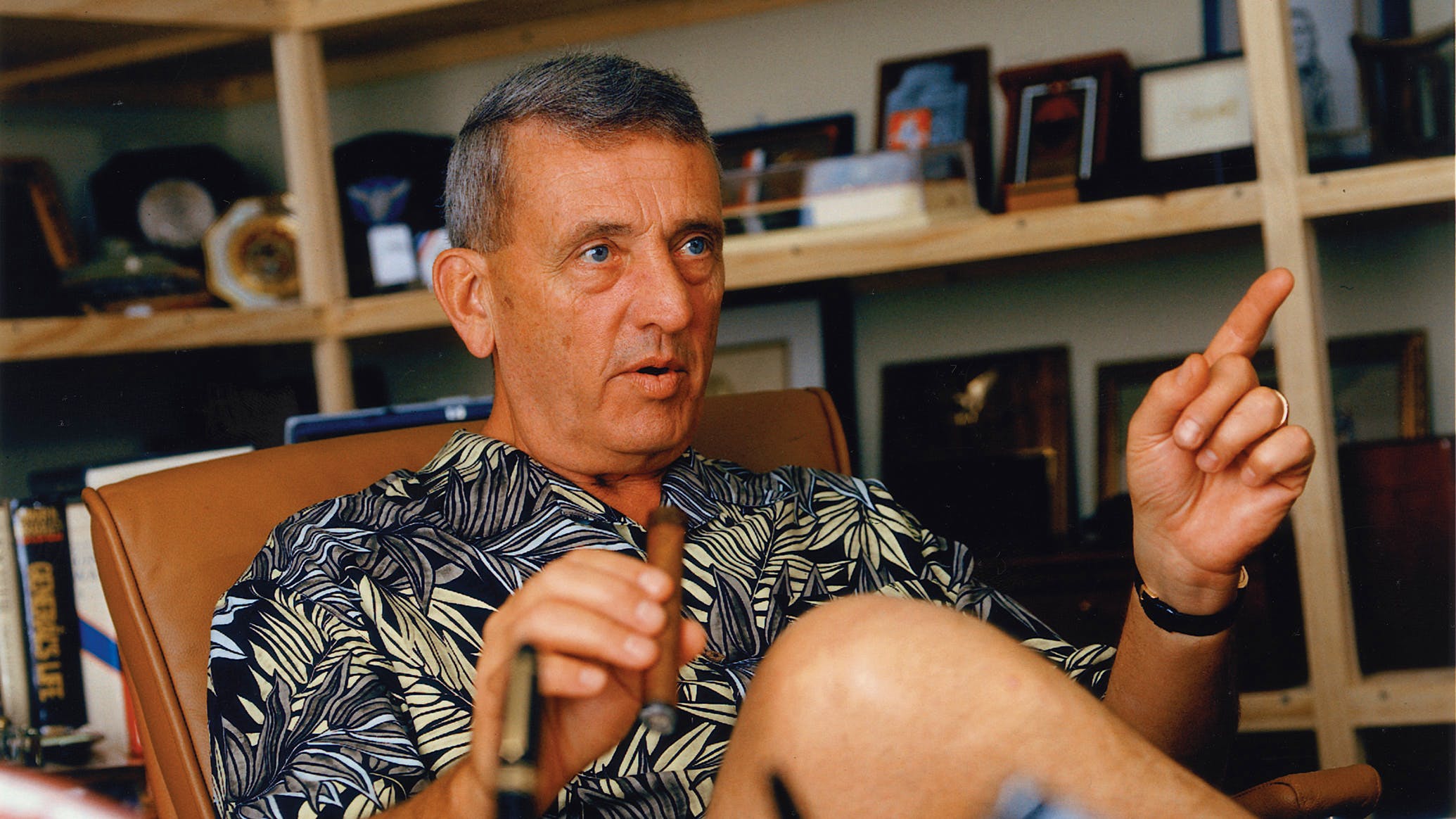 “I may run out of furniture in my houses, but I damn sure won’t run out of humidors,” says Gen. Tommy R. Franks, who spearheaded America’s military response after the 9/11 terrorism attacks. Franks oversaw American military operations in Iraq and Afghanistan in Operations Enduring Freedom and Iraqi Freedom. He spent his entire career in the Army, enlisting in 1965 and serving in Vietnam, and ultimately being promoted to Commander In Chief, United States Central Command.

Today, Franks is 75 and retired, with several places he calls home, each with a cigar-friendly spot. “I make sure in each place that I have a place where I can smoke,” he says. “I smoke at least one cigar everyday.”

He keeps busy nowadays in his retirement pastime, helping future leaders of America with the Gen. Tommy Franks Museum and Leadership Institute. In his downtime, he likes to congregate with his buddies for cigars. Normally, that would be at the Oklahoma City outpost of Burn by Rocky Patel, but since the pandemic they have moved their smoky gathering to Zoom.

In addition to Padróns, he also puffs Montecristo No. 2s, Cohiba Behikes and Oliva Serie Vs.

In 2004, President George W. Bush awarded Franks the Presidential Medal of Freedom. Serving his country, he says, “certainly was the highlight of my life.” — David Savona 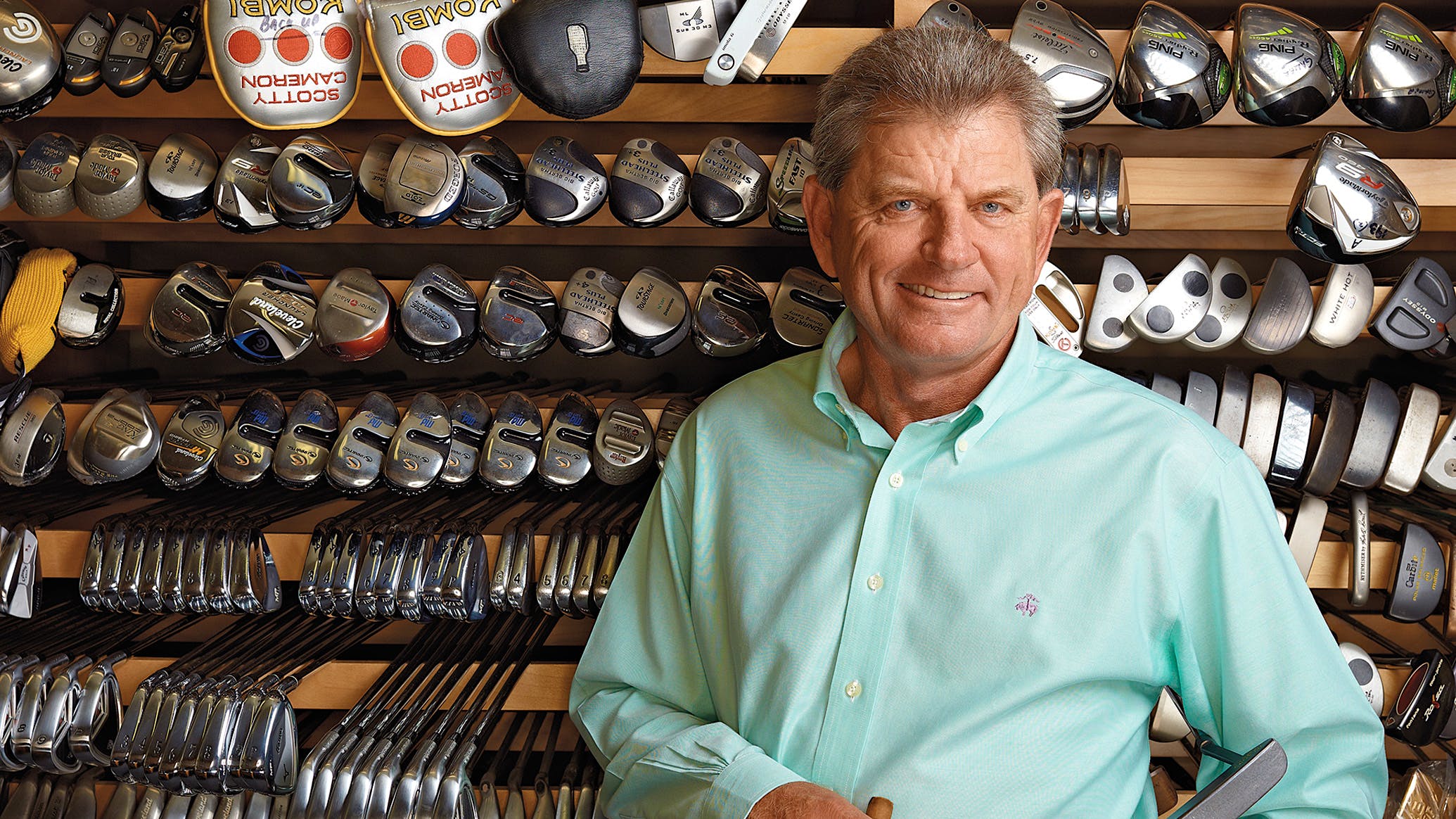 Nick Price, three-time major champion, is enjoying the fruits of his labor in retirement at his Florida home, where he plays a little golf, does a little fishing and always finds time for a great cigar.

Price won the PGA Championship in 1992 and both the PGA and the British Open Championship in 1994. The Zimbabwean ascended to No. 1 in the world and is credited with 48 victories worldwide. For about 20 years now he’s enjoyed smoking cigars. Olivas and Davidoffs are his regular smokes, but if he’s really looking for something luxurious he goes for a Cohiba Behike. “I just really enjoy that smoke, lots of flavor but not too strong,” says Price. “I have a friend who gets boxes of them, and every now and then he gives me some. I’m lucky.”

So where does Price puff such a top-quality smoke? He loves sitting on the back of his boat in the Bahamas late in the afternoon. “Just enjoying the beautiful scenery, watching the sun going down in the Bahamas, anywhere in the Exumas,” says Price. “Cohiba Behike—that’s the creme-de-la-creme of cigars for me.” — Jeff Williams 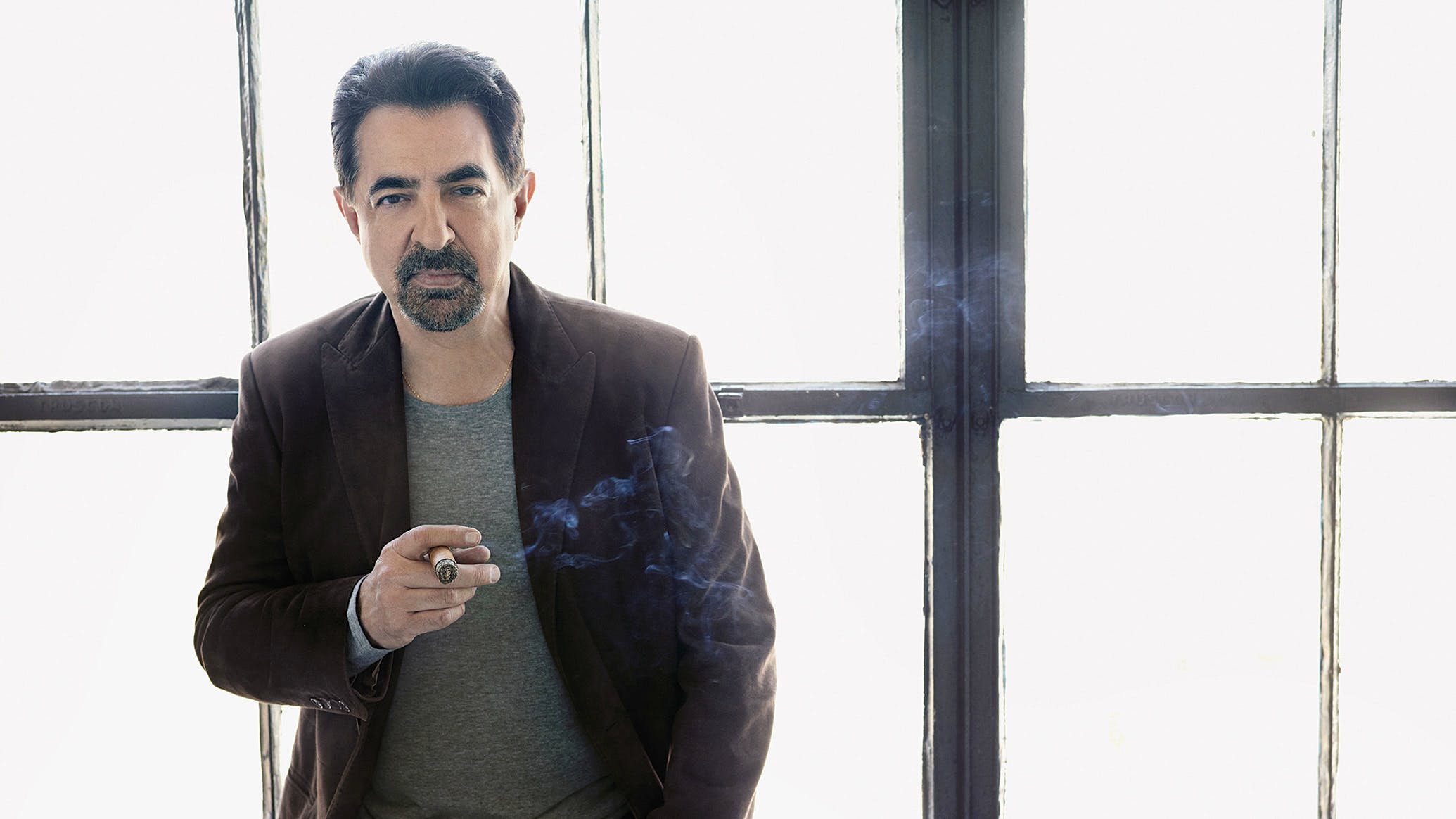 When actor Joe Mantegna told Cigar Aficionado that he liked Arturo Fuente cigars in 1994, he didn’t realize it would be the start of a lifelong friendship. After the story came out, Mantegna was introduced to Carlos “Carlito” Fuente Jr., who later presented Mantegna with specially branded boxes of cigars when the actor got his star on the Hollywood Walk of Fame.

Mantegna says that when they met, “Carlito opened his arms and embraced me. He said, ‘You had the balls to name our cigar as your favorite.’ And that started our friendship.”

The Tony Award-winning actor, 73, started smoking cigars as a Chicago teen: “We’d play poker in high school and smoke Hav-A-Tampa Jewels,” he says. “It wasn’t until later that I started being exposed to high-quality cigars.”

A longtime collaborator with writer-director David Mamet, Mantegna has more than 200 films and TV shows to his credit, and was an original member of the Grand Havana Room in Beverly Hills. While he will occasionally trade up—to the Fuente Fuente OpusX—it’s the Hemingway Classic he prefers. “I just like the fucking things,” he says. “All I can tell you is that, when I light up, it’s always there for me.” — Marshall Fine 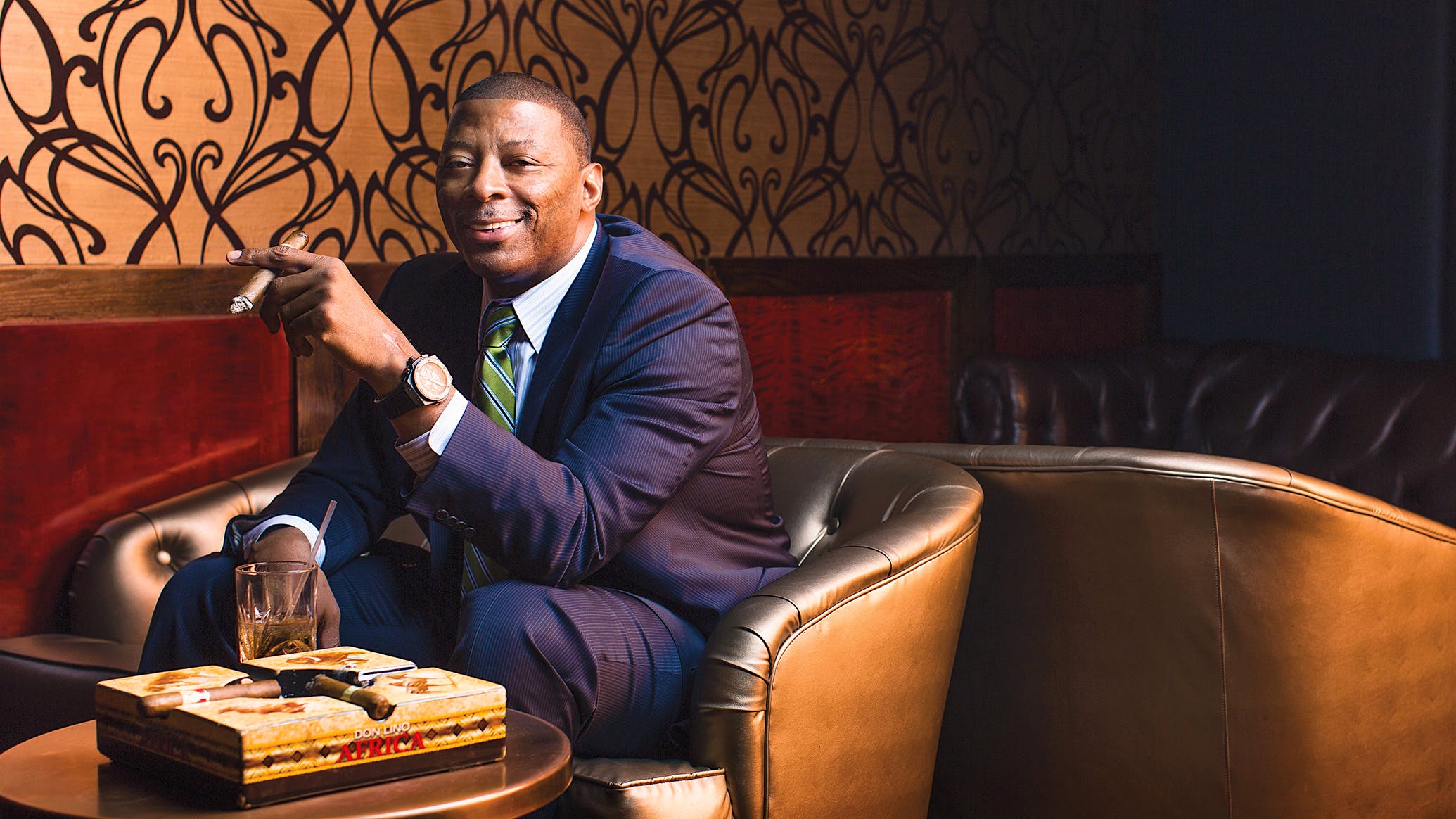 “My home humidor is well stocked,” says Carl Banks, who played in the NFL from 1984 to 1995, most notably winning two Super Bowls with the New York Giants as one of the league’s top linebackers. His favorite is the Fuente-made Ashton Virgin Sun Grown Belicoso No. 1, and he’s also taken a recent liking to Liga Privada No. 9s from Drew Estate. Fittingly, this is a man who likes his cigars with copious amounts of power.

Born in Flint, Michigan, Banks knew he wanted to play football when he was just nine years old. (He loved basketball too, but when he played on the same court as Magic Johnson at a basketball camp, he realized he was too short to make it in the NBA.) He played college ball at Michigan State, and was chosen No. 3 in the 1984 draft by Bill Parcells. Today, he analyzes football games on Sirius and
WFAN, and owns the Starter jacket brand.

The pandemic hasn’t impacted his cigar smoking, as he has access to a private cigar lounge with a 24/7 policy that doesn’t allow guests. On truly special occasions? He goes for the Padrón Serie 1926 40th Anniversary, the first cigar ever named Cigar of the Year by Cigar Aficionado. — DS 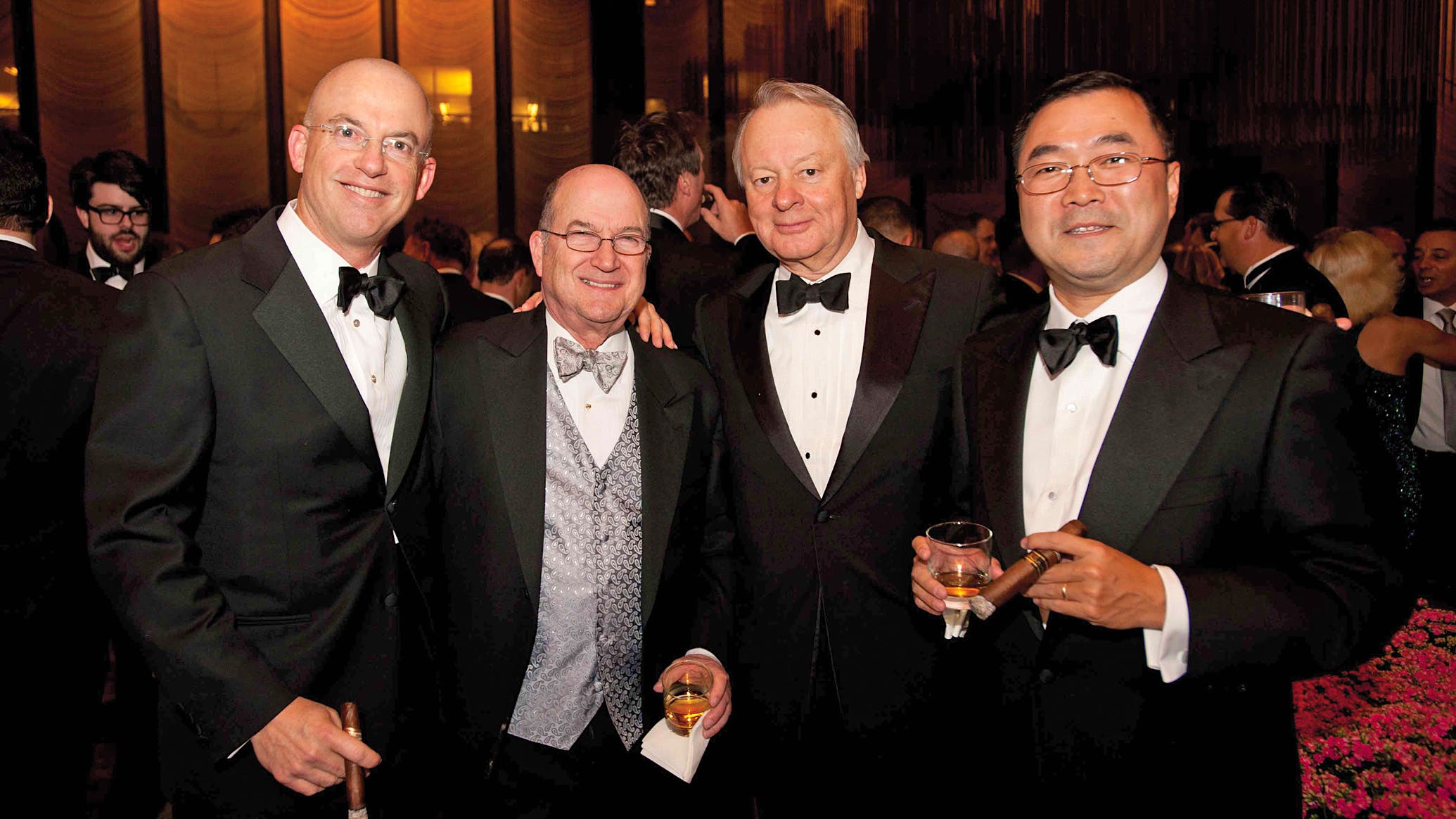 When Michael Gelband (far left in the above photo) lights up a cigar, it sometimes brings up memories of his uncle Jerry, who fought in Korea. “He always had a cigar,” says Gelband, CEO of ExodusPoint, a $13.5 billion hedge fund. “The smell of it, it sort of reminds me of my uncle, who I was very close to. He was one of my best friends, and he’s passed.”

Gelband, 61, has been working in finance for 38 years. ExodusPoint, which he co-founded, launched in 2018 and became the biggest start-up ever in that industry. “We have approximately 600 people around the globe,” he says. “I’m proud of our team.” When he’s traveling to his offices in Europe and Asia, his go-to cigar is Romeo y Julieta. In the U.S. he enjoys Padróns and Arturo Fuentes.

Gelband grew up in South Florida, where cigars were ubiquitous. “My Cuban friends’ families, they were always smoking cigars,” he says. He enjoys the social element of cigar smoking, especially when he’s playing golf. “It makes instant friends. You smoke on the course, smoke when you finish a round—it’s a wonderful barrier remover,” he says. “Everyone’s off their phones, you sit and you talk to people. It’s a wonderful bond.” — DS 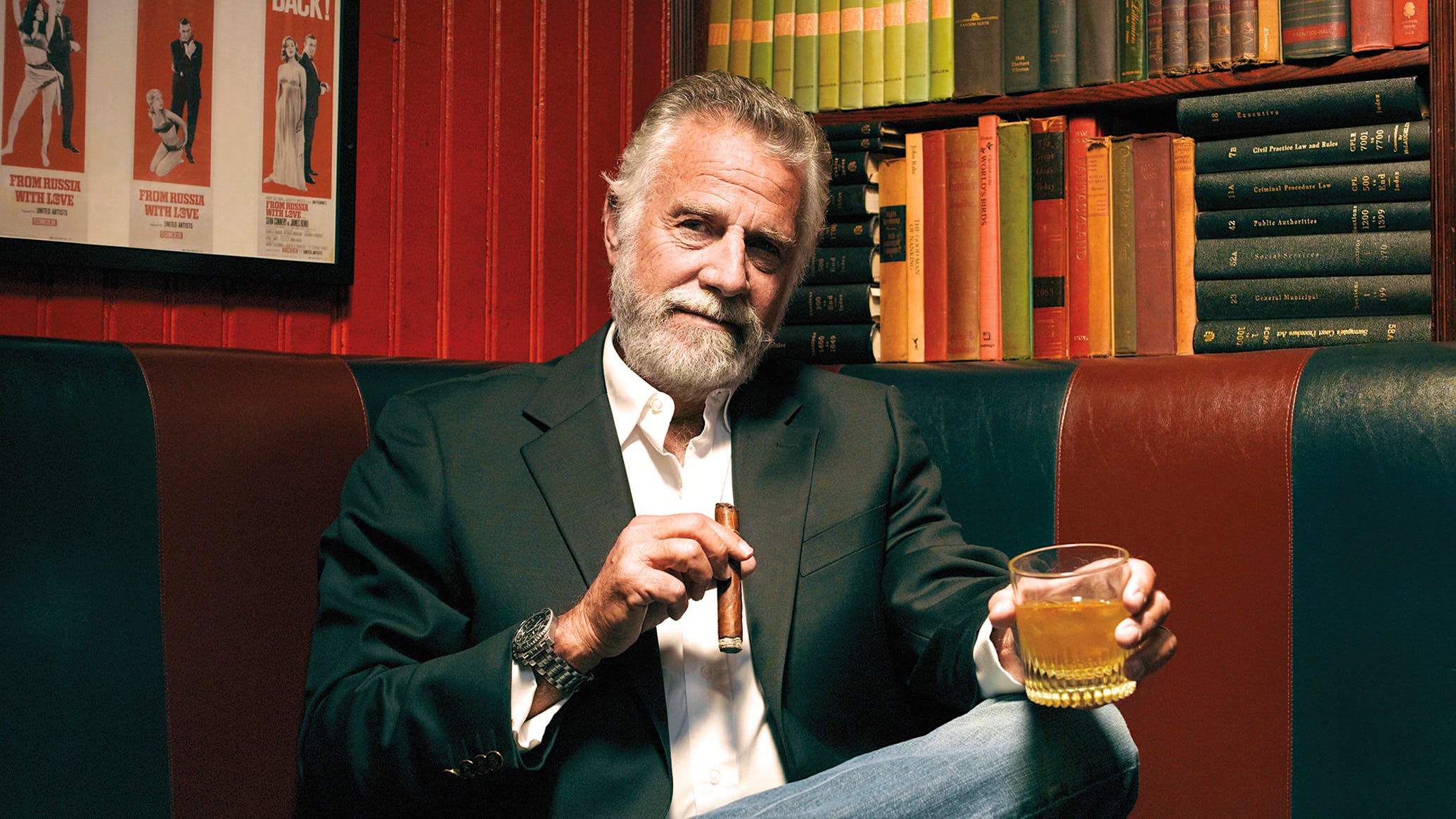 The original Most Interesting Man in the World, Jonathan Goldsmith, is a man of many cigars, including an array of top-scoring non-Cubans. “For years it was cocktails with a Short Story, after dinner a Punch Gran Puro. Lately, I have very much enjoyed the E.P. Carrillo Encore Majestic,” he says, speaking of Cigar Aficionado Magazine’s 2018 Cigar of the Year.

Goldsmith is a career actor. Born in the Bronx, he got an unlikely break when he landed a role in a Western, after lying about his ability to ride a horse (the city boy had no idea how) and nearly dying while atop the saddle. He later learned proper form, and embarked on a career that included roles with John Wayne (the Duke shot Goldsmith, multiple times) and Burt Lancaster. But Goldsmith’s star never shined brighter than when he was pitching Dos Equis in one of the most memorable ad campaigns in modern memory.

His onetime character may not always drink beer, but Goldsmith always smokes cigars. He’s been puffing them since the 1960s. Now 82 years old (he looks far younger), he lives a quieter life in Vermont, where he enjoys fishing. When he ties flies, it reminds him of his father, who was also a cigar smoker. “My father was my hero,” he says. — DS 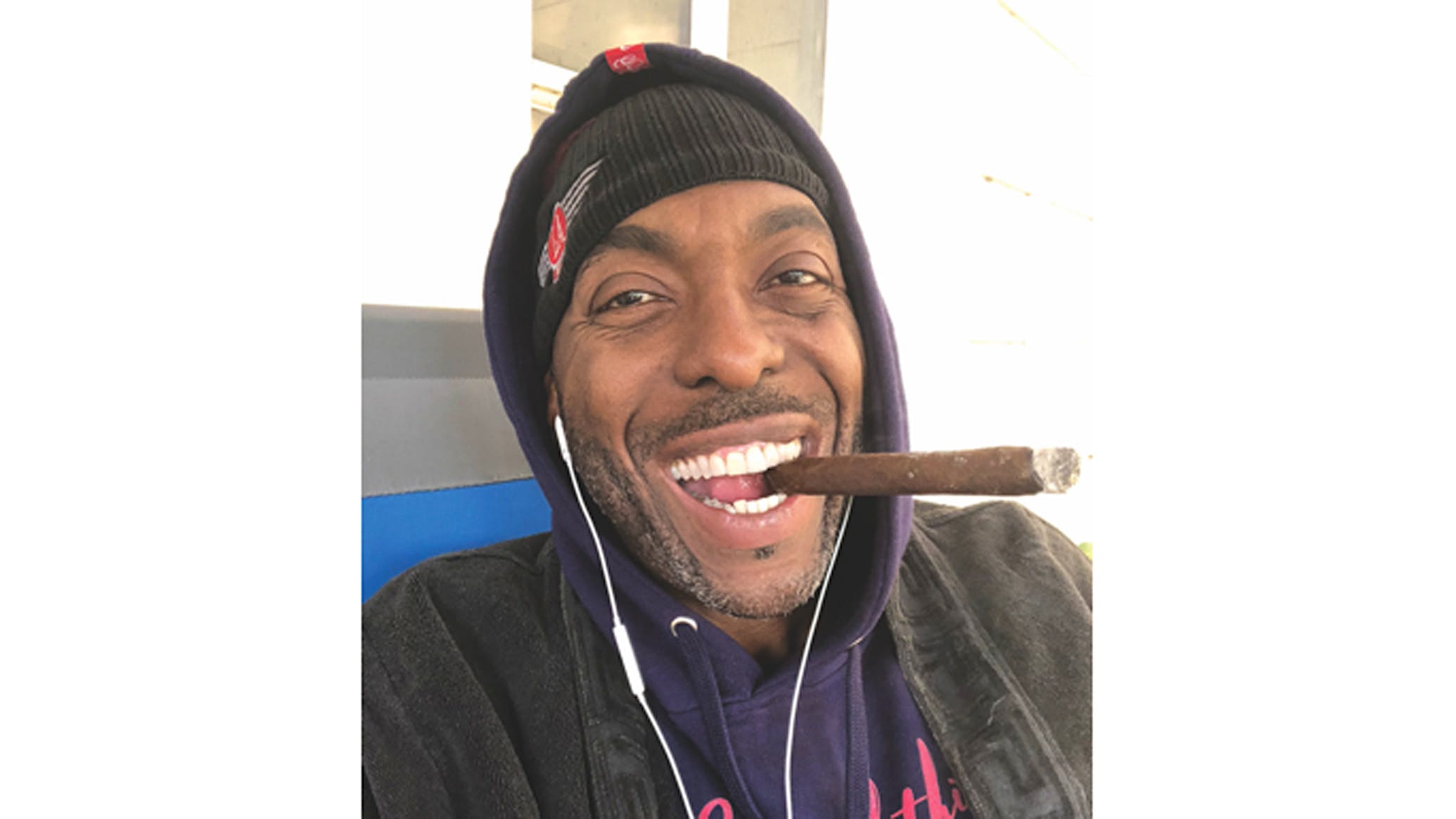 When friends are stuck for what to buy John Salley for a present, he makes it easy for them: Padrón Anniversary Diplomatico. “They all know to call Fat Stogies and use my code,” says the holder of four NBA championship rings about his local cigar purveyor in Encino, California. “They always keep a few boxes on hand for me.”

Salley may seem unusual—a vegan who smokes cigars. But the 6’11’’ power forward, who played for the Bulls, the Heat, the Pistons and the Raptors, swears by a regime that includes cigars, whiskey and wine along with yoga and health food. “Everything I enjoy is grown from the earth.” His cigar tastes include Rocky Patel, My Father and Tatuaje, and Salley reels off tasting notes for each. “You must smoke the best,” he professes. “People put a lot into these cigars. It is part of why I like them.” He spends a lot of time with his cigars, sometimes to the consternation of those around him. “They say, ‘How long are you going to smoke that cigar?’ I say, ‘I don’t smoke the cigar. The cigar smokes itself. I just help it along.’ ” — Jack Bettridge 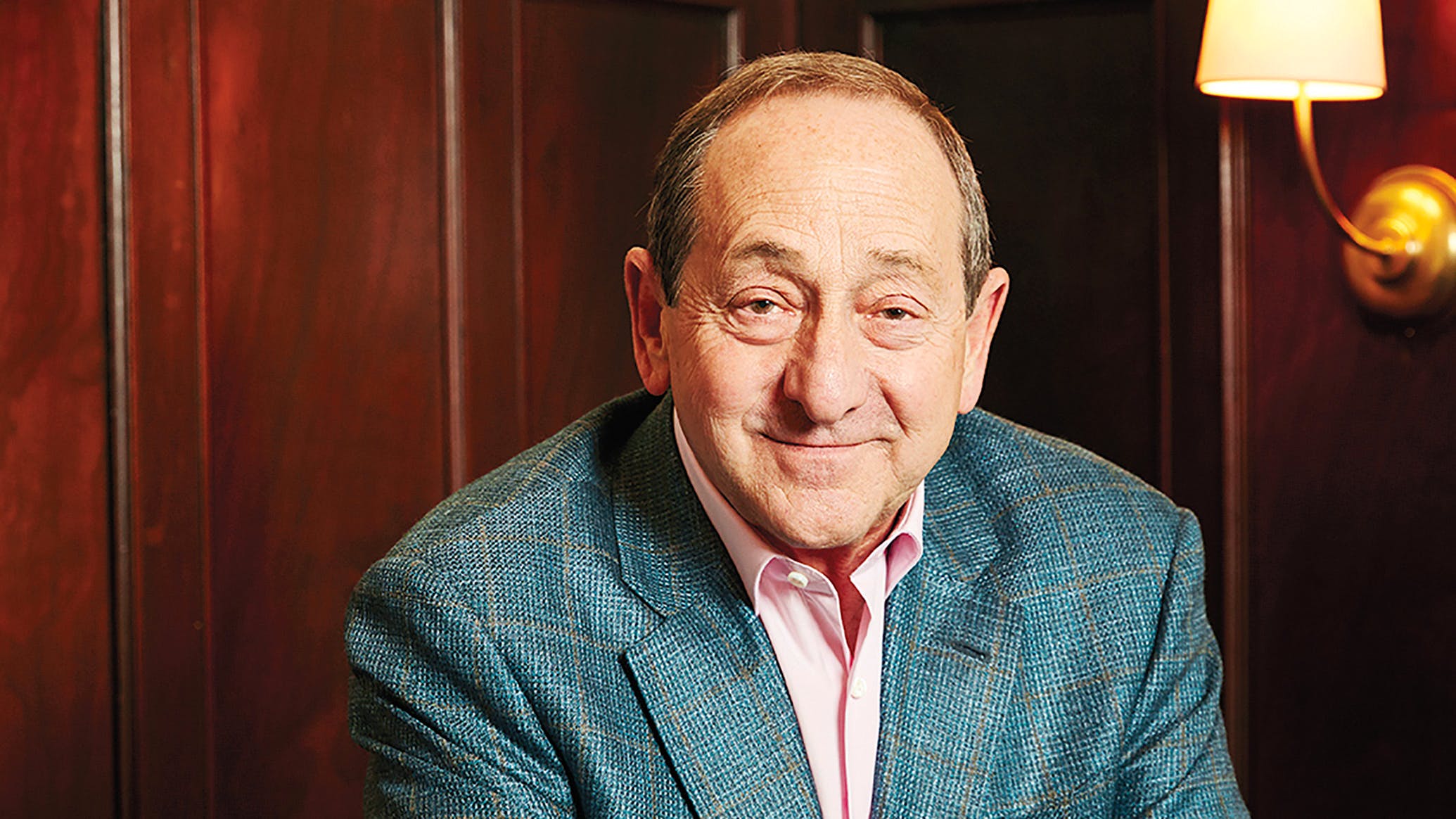 “If I get to smoke, it’s only one a day,” says Chicago trial lawyer and best-selling novelist Ronald Balson. “Here in the frozen Midwest, we can go days without a cigar. I’m not a guy who smokes indoors. I need to wait for the nice weather and the golf course.” The one? “I’m still smoking Ashtons,” he says, describing the original Ashton blend. “Light wrapper, Dominican Republic.” He also smokes some Davidoffs.

Balson’s calendar is bursting. Since his first novel Once We Were Brothers (2013), he has fired off five more, all in the same series of historical fiction. Next up is Defending Britta Stein, due in September. “I can reach far more readers than I did before,” he says, extolling the virtues of Zoom conferences.  “Readers have the opportunity to ask questions,” he says. “It has expanded the number of readers who are now introduced to my writing.” Never a quantity smoker because of his hectic schedule as a professor, attorney and writer, Balson’s opportunities to light up are sweeter for their rarity. He confesses to another cigar indulgence for whenever he finishes a new book: “I have a few Cubans saved up.”  — Kenneth Shouler 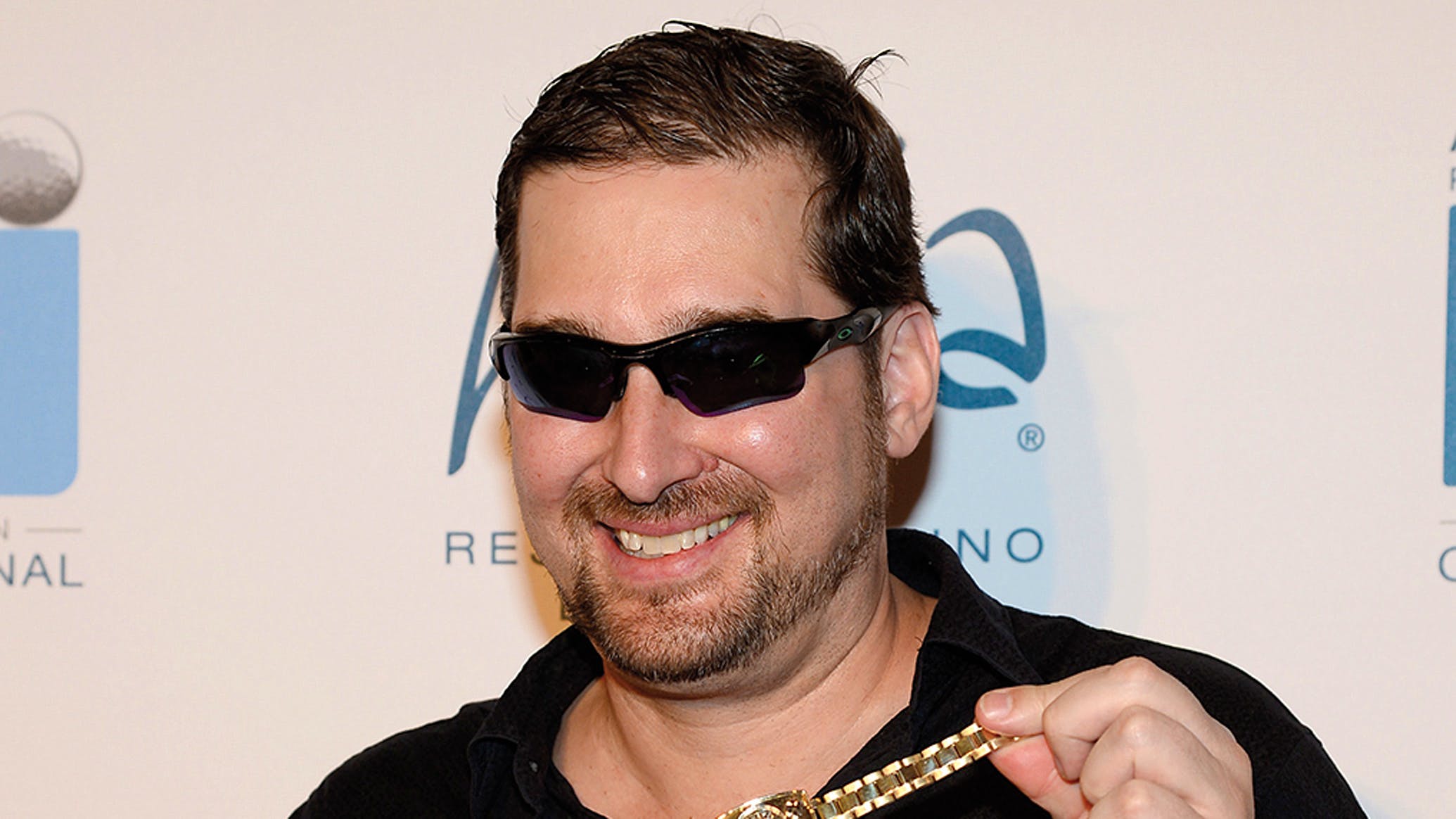 Wander out to the fire-pit behind the Palo Alto, California, home of poker great Phil Hellmuth and a cigar is mandatory. “Half the cigars I smoke, they seem to be smoked out here,” says Hellmuth, who holds a record 15 World Series of Poker bracelets. “Lately, I’ve been smoking the Cohiba Toro Tubo from Santiago. I like medium-bodied cigars, which this one is, and the ring-gauge suits me. Plus it’s relaxing. With a glass of Kimo Sabe mezcal on the rocks, the Cohiba makes me feel pretty good.”

Hellmuth recently flew to Vegas to take on Antonio Esfandiari. The idea was to play three matches, starting with a buy-in of $50,000 each and the loser able to double succeeding buy-ins. “Antonio was very cocky during the first match,” says Hellmuth. “I beat him.” After the victory, Hellmuth retired to Aria’s high-limit lounge for a smoke and mezcal. “Next match, Antonio wanted to play for $100,000. I won again.” He went back to the lounge for another cigar and mezcal.

After losing a year to the pandemic, the Els for Autism Pro-Am golf tournament got an assist from the …