How can customers in a cigar lounge smoke a cigar if they have to keep their masks on at all times? That’s exactly what Michigan business owners are trying to figure out. In an effort to reduce the spread of Covid-19, the Michigan Department of Health and Human Services issued a mandate late last month stating that masks must be worn at all times in smoking lounges and that the removal of a mask could have severe legal and financial consequences.

“Clearly this is an attempt to ban smoking under the guise of public health and safety and it will have an impact on revenue for the foreseeable future,” Andy Hyde, owner of Nolan’s Cigar Bar in Traverse City, Michigan, told Cigar Aficionado. White also serves as president of the Michigan Premium Cigar & Pipe Retailers Association.

According to the current order entitled “Gatherings and Face Mask Order,” the removal of a mask in a gathering (defined as “any occurrence, either indoor or outdoor, where two or more persons from more than one household are present in a shared space”) is allowed for eating and drinking only.

Failure to comply will result in a misdemeanor, punishable by up to one year in jail for the smoker and/or a $200 fine, and may result in a civil citation of $1,000 for each violation or day that the violation continues. Along with that, businesses that permit smoking on their premises may also be cited for the violation.

The mandate is quite clear: smoking in a cigar lounge in Michigan is illegal.

An email from a MDHHS official to cigar lounge owners stated the following: “The Director’s order is clear that there is no exemption for mask removal for the purpose of smoking. Accordingly, it is a violation of the order for a person to remove their face mask to smoke tobacco or any other substance (including vaping, marijuana or herbal substances) while participating in a gathering. This means that tobacco specialty retail stores, hookah lounges, cigar bars, and other venues that hold an exemption from Part 126 of the Public Health Code cannot permit smoking in their facility.”

It’s not surprising that some cigar lounge owners feel specifically targeted, especially considering the dispensations given to other businesses. On February 1, for example, restaurants in Michigan were allowed to reopen at 25 percent capacity, and diners were allowed to eat and drink without wearing masks. 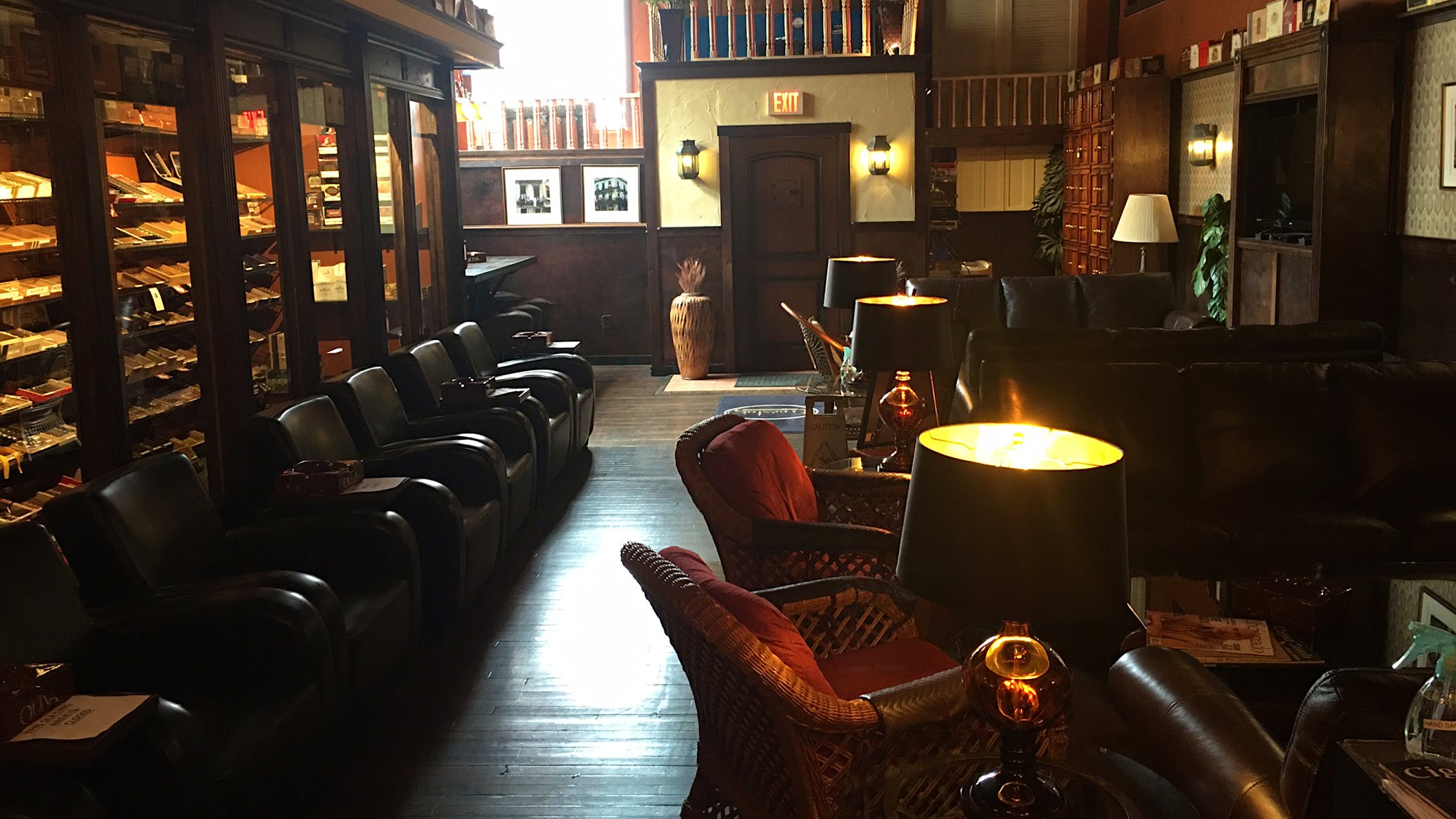 Ernesto’s Cigar Bar & Lounge in Petoskey, Michigan is one of many cigar bars adversely affected by the state's Covid-19 restrictions. (Photo/Phil Harmon)

“I totally think it’s unfair to be able to eat and to drink and also be able to do the same at casinos but not being able to smoke in our lounges,” said La Casa Cigar Lounge’s owner Ismail Houmani, who has locations in both Detroit and Ann Arbor. “I don’t really see a difference when we are complying with the Health Department procedures by social distancing and keeping at 25 percent capacity. I don’t see where that’s going to be an issue in the difference between eating and smoking,”

Alex Engelman, owner of Ernesto’s Cigar Bar & Lounge in Petoskey, shares Houmani’s sentiment: “So, you can sit at the cigar bar with your mask removed to consume beverages, but you are not allowed to consume cigars. You can sit at a restaurant with your mask off to consume food and beverages, but you can’t smoke a cigar in a place that has a license from the state that says this is what you are legally allowed to do here. Makes a lot of sense, right?”

In the initial months of the pandemic, cigar lounges, among other establishments, were closed down in the state of Michigan. Over the summer, cigar lounges and cigar bars such as Ernesto’s were allowed to operate at 50 percent capacity with social distancing, hygiene and mask policies in place until November 15 when all bars, cigar lounges and restaurants were shut down again by the MDHHS (for dine-in service, in the case of restaurants) until February 1. When the businesses were allowed to reopen in February, occupancy in these establishments was reduced to 25 percent capacity with stricter guidelines in place. After a few weeks, the MDHHS issued a clarification that masks could not be removed for the consumption of tobacco products.

While this measure has a drastic effect on business for cigar bars that serve alcohol, the mandate has a particularly devastating effect on cigar lounges that don’t provide food or alcohol, rendering the lounge space essentially open to no one.

“The bulk of our business is lounging—where they come to sit down and drink and be able to smoke. By them not allowing that, that is really going to hurt us more than the 25 percent capacity. We are also losing a big portion of the retail sales because our customers like to buy a cigar and smoke it in the lounge,” Houmani said.

“We are in a fight now for our very existence, fighting to use the licenses we have all paid for year after year, and fighting for our rights as cigar smokers,” Engelman stated. “In Michigan with a cigar bar exemption license, 10 percent of your sales must be from selling cigars. The concern is that many cigar bars and cigar bistros will have a much more difficult time upholding this percentage as many of our cigar sales come from the ability to smoke a cigar indoors. If you are at 9.99 percent it doesn't matter, the state will revoke your license.”

Yesterday, Hyde had a video conference with the state’s health department director Elizabeth Hertel and her staff in hopes of reaching some sort of compromise, but Hyde was not alone. He was joined by Dave Jessup, who serves as Michigan contract lobbyist for the Premium Cigar Association; PCA state advisor Glynn Loope; and the PCA’s head of government affairs Joshua Habursky. Habursky told Cigar Aficionado that the department was open to their feedback and receptive to them providing follow-up information to come to a quick resolution, although no further details were given.