Share
The new Eight Cigar Lounge has plenty of comfortable seating, high-end spirits and classy accents such as its sparkling chandelier.

Las Vegas has always been a great cigar city. It’s the home of the famously exclusive Casa Fuente line, gamblers tie Blackjack sessions to how long it takes to finish a smoke at the table and every casino host worth his salt discreetly maintains a humidor of Cubans for top players.

Beginning tonight (one day before the kickoff of Cigar Aficionado's Big Smoke Las Vegas weekend), things will get a notch better for Sin City cigar lovers. Eight Cigar Lounge is having its grand opening tonight (it will open to the public at 11 pm following the invitation-only party) at Resorts World Las Vegas, the newest, priciest hotel/casino in town, and it promises to provide premier experiences for smokers. Dreamed up by local entrepreneur Giuseppe Bravo and superstar attorney David Chesnoff, with Clique Hospitality serving as operator, it’s a 4,500-square-foot haven with top-notch food, drinks and cigars. It also has a ventilation setup that claims to recirculate the air every four minutes, putting it on par with the systems found in most hospitals.

The walk-in humidor is set to hold 150 lines of cigars, with a couple of treats for high-rollers: Bravo is expecting to bring in pre-embargo Cubans that will start at $300 per stick and Gurkha HMRs (His Majesty’s Reserve, said to be made with Louis XIII Cognac). Other fine smokes will come courtesy of Altadis, Drew Estate, Fuente and Padrón. “I’m expecting couples to come here and enjoy cigars together,” Bravo told Cigar Aficionado on the eve of Eight’s opening. “This is not an old, smoky cigar lounge. It’s the kind of place where a CEO can hold meetings during the day and come in later on after a night of gambling or clubbing.” 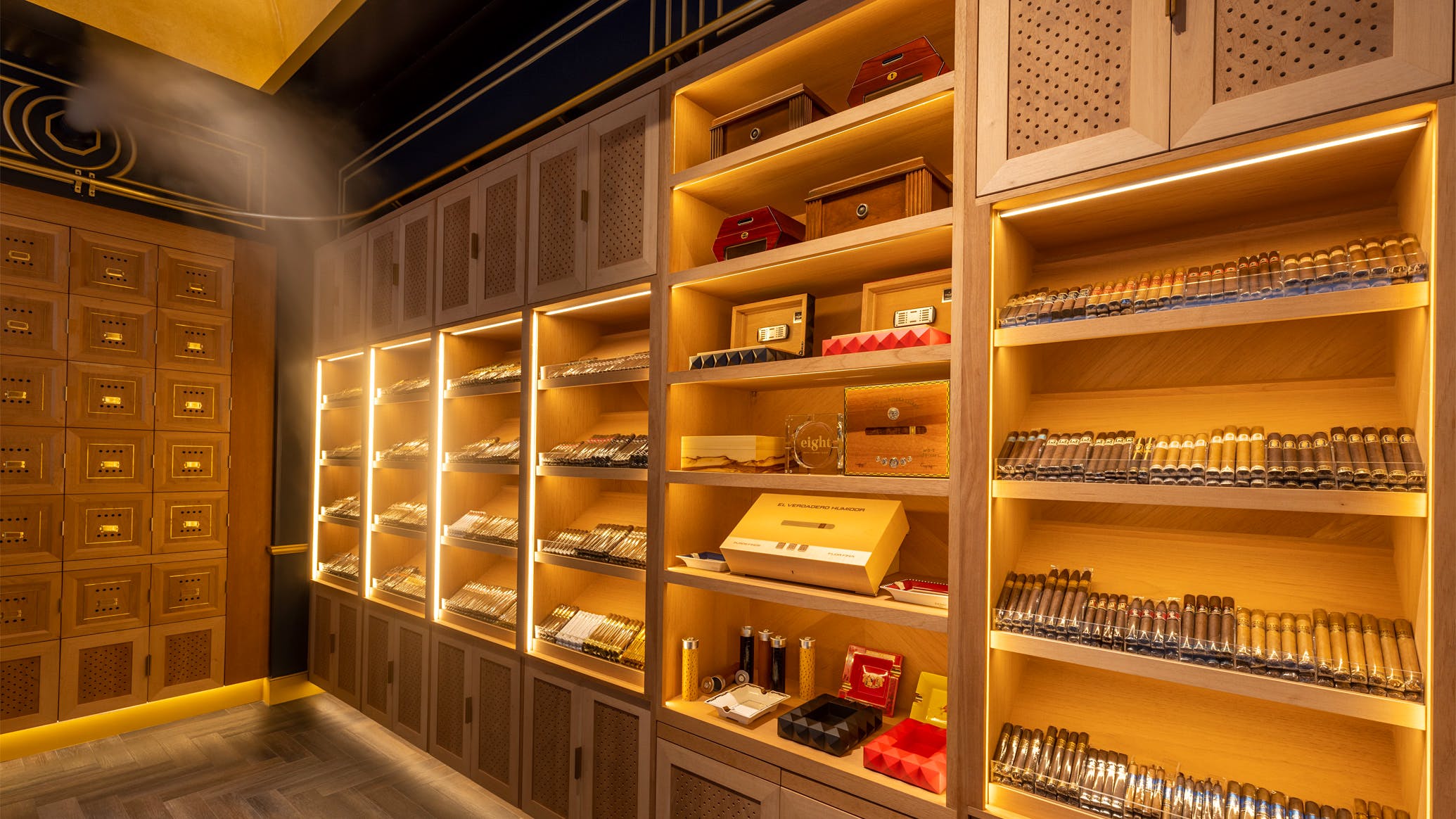 The walk-in humidor at Eight Cigar Lounge features an array of premium cigars, as well as high-end accessories like lighters, ashtrays and humidors.

Helping to push things to the next level will be a cool music program—jazz during the day, heavier beats at night, DJs on the weekends and live music when the feeling strikes—TV monitors that contain works of art when the games aren’t going and food brought in from the excellent Brezza, chef Nicole Brisson’s Italian restaurant next door. Her mortadella melt and panzano burger with gorgonzola mascarpone promise to go way beyond bar food. Cigar rollers will be brought in on special occasions.

Eight has an outdoor component as well, a 2,300-square-foot landscaped patio (complete with an outdoor fireplace) which serves as a perfect retreat for those who want to do a bit of stargazing while puffing. The lounge also has cigar and whisky lockers for members, an outrageously cool chandelier and a bar that offers cigar pairings that promise to make smoking/drinking experiences more than the sums of their parts.

The drink selection includes such standouts as Caymus cabernet sauvignon and Larceny Barrel Proof Bourbon. “The pairings are great,” says Bravo, revealing that that he has a personal favorite. “Give me a glass of Macallan 18 year with a Montecristo White Vintage and I am in paradise.”