Share
Exceptional views, cigars, and drinks are all on the menu at the Legacy Club atop the new Circa Casino Resort in Old Downtown Las Vegas.

Old Downtown Las Vegas, where the city so colorfully started, has seen a renaissance in recent years, and is once again drawing visitors away from the mega-resorts of the Strip with its updated historic charm. New corporate headquarters, condos and full-time residents have driven an explosion of independent restaurants, bars and attractions, from parks to museums. There has also been casino and hotel renovation, but the towering, 777-room Circa, which opened for New Year’s 2021, is the neighborhood’s first entirely new major casino resort in four decades. With upscale rooms, the world’s largest sports book, arguably Las Vegas’ best pool complex, and a well-curated selection of appealing eateries, it immediately becomes the top choice for anyone wanting to stay Downtown. 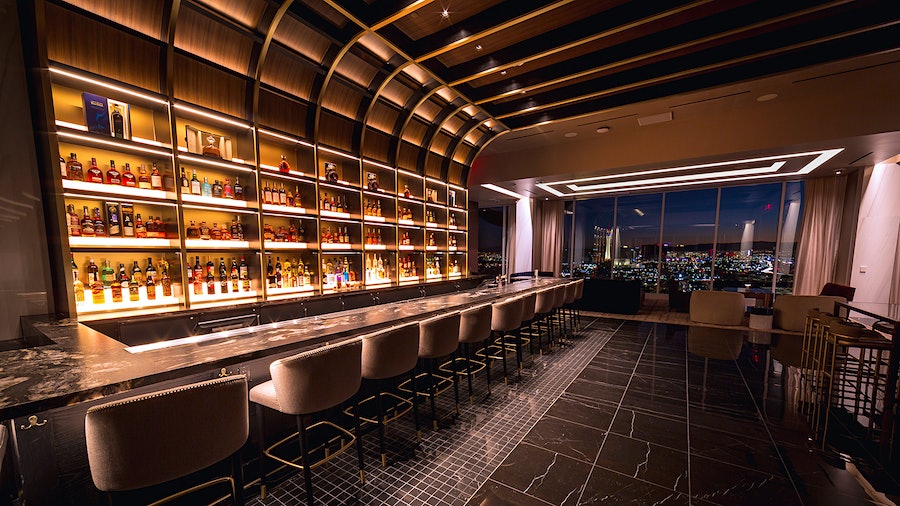 The club features a bar with towering shelves stocked with plenty of premium Scotch, Bourbon and Tequila offerings, as well as a humidor located beneath.

It is also an adults-only resort, a rarity in Las Vegas, and after an ID check at the door, guests will not encounter anyone who is not old enough to drink, gamble and smoke. These are all favored pastimes of Circa’s colorful owner Derek Stevens, a Vegas cheerleader who has driven much of the Downtown comeback, and previously redeveloped his other nearby properties, the Golden Gate and The D. As a result, Circa is smoker-friendly throughout, with ashtrays in the rooms, and a powerful custom downdraft ventilations system through public areas. But the heart and soul of this is the Legacy Club, an upscale rooftop lounge on the 60th floor. Circa looms above Downtown as the tallest building in Las Vegas north of the Stratosphere, giving it impressive views in every direction, and the Club features floor-to-ceiling windows and ample indoor and outdoor seating. The latter is surrounded with a transparent, six-foot high wall and includes a mix of couches, chairs and high-top tables, as well as circular couch seating ringing firepits, an unusual and cozy option in the city. They offer reserved sunset packages that include an outside table, two signature cocktails and a Champagne toast, booked for a particular time period based on the sunset each evening. In another unique twist, the Club offers craft cocktail making classes by appointment, and special prix fixe evenings for viewable events such as the Fourth of July and New Year’s fireworks displays. 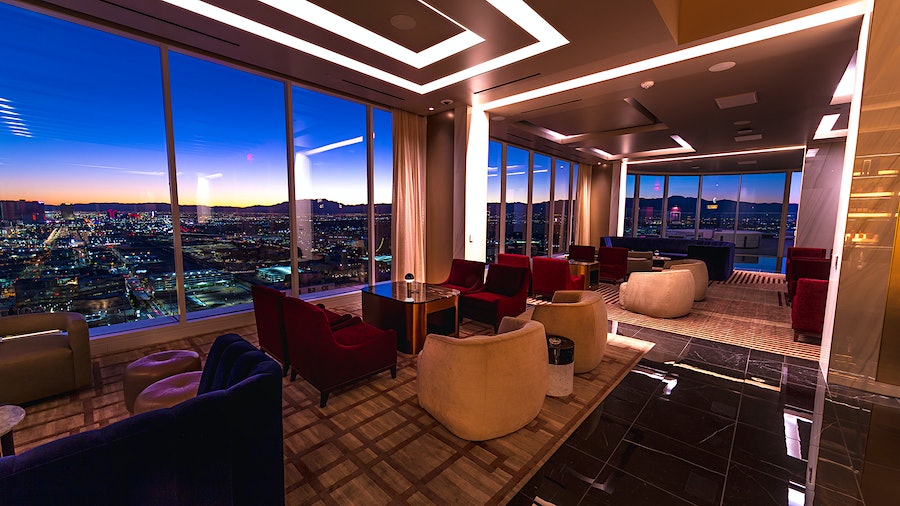 Located on the 60th floor of the resort, Legacy Club is surrounded by floor-to-ceiling windows and offers ample seating indoors and outdoors.

The Legacy Club is an upscale cocktail bar, not a day club or ultra-lounge, and has a dress code (elegant casual) with reservations heartily suggested. Stevens is a fan of Las Vegas history, and even his brand-new hotel honors it with art and artifacts throughout, most notably “Vegas Vicky,” the famous 25-foot high “kicking” neon cowgirl that once adorned the exterior of the defunct Glitter Gulch strip club on Downtown’s Fremont Street. The refurbished icon hangs over the main casino floor, and local artwork based on her adorns the walls of the Legacy Club. This Old Vegas theme begins as soon as you exit the elevators into the club, as all arriving guests are greeted with a wall of bronze busts of the city’s “Founding Fathers,” the colorful characters who helped shape Las Vegas, from Howard Hughes to Benny Binion. The latter used to famously display a million dollars in cash in his Binion’s Horseshoe casino, a popular photo opp for tourists long before the selfie era, but since $1 million is not as impressive as it once was, the stack of bills was replaced by a bank of slot machines. So, Stevens put his own twist on the longstanding local tradition, and a large glass display case here is filled with 500 gold bars, topped with a digital display of the constantly updated value based on the fluctuating price of the precious metal. (At one time, it was worth more than $1.7 million.) 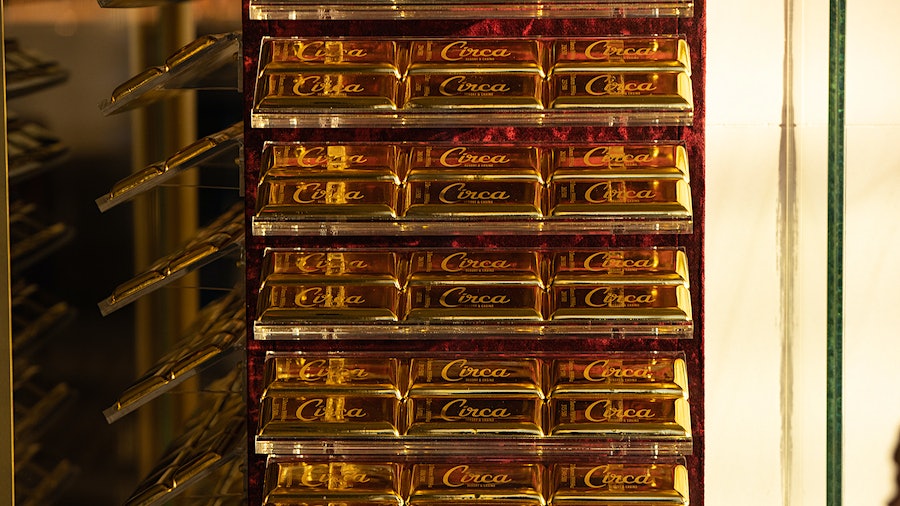 A close-up look at the aforementioned gold bars found at Legacy Club.

The humidor sits at the bar, beneath towering shelves devoted mainly to premium Scotch, Bourbon and Tequila offerings. There is a long craft cocktail list and signature “Build your own Old Fashioned” program. The small range is divided into five categories, Mild, Medium, Full-Flavored, Rare and Infused. Brands include Arturo Fuente, Montecristo, Padrón, Rocky Patel and even some Fuente Fuente OpusX (in the Rare category) with cigars priced from $25 to $125.

For those who have not visited Downtown in years and recall its less polished days, the Legacy Club is a surprising oasis of elegance high above the outdoor pedestrianized street party going on below.

Read Next: Where to Smoke: Cuban Creations, New Orleans, Louisiana