The right side of the fairway is jagged, as if a towering sea god had risen from the crystal blue waters of the Caribbean to rend the earth with his mighty, clawed hands, removing safe landing areas for your golf ball. Welcome to the 17th hole at Teeth of the Dog in Casa de Campo.

The resort has three golf courses, the best of which is this one, which has been delighting and challenging golfers since it opened in 1971. Designed by Pete Dye, the course was created by more than 300 workers over the span of a year. As legend goes, the workers noted the bite of the sharp coral near the sea, calling it dientes del perro, Spanish for “teeth of the dog,” and the course had its name.

More than coral bites here. Seven of the holes are on the water, and aside from the obvious peril of putting a shot into the ocean, those seaside holes make for tough conditions. One of the more striking holes is the fifth, a short par 3 that has a tee box and green that both jut into the water. The entire carry is over lapping waves, and one day those ocean breezes can be tamed with a wedge, while on others it could call for a five-iron. Watch the winds, and listen to the caddies, who are long on experience here. Playing from the black tees, the course stretches more than 7,300 yards and has a well-earned 140 slope rating. 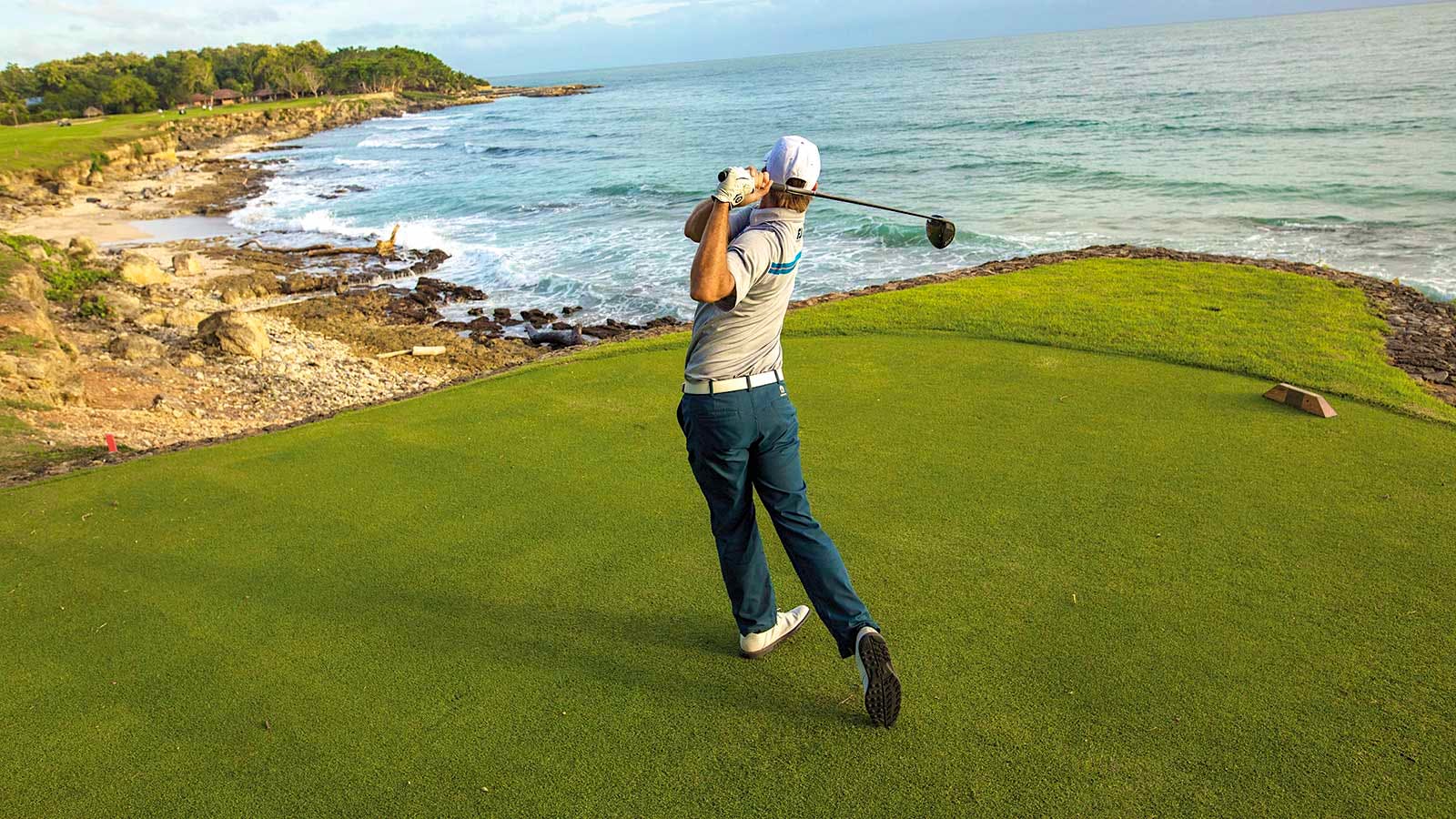 Hoping to find the fairway on the 17th at Teeth of the Dog. Photo/Brett Winter Lemon

One of the many beauties of playing Teeth of the Dog is its convenience. If you’re staying at Casa de Campo, the golf course is mere steps away from Lago Grill, the thatched-hut breakfast restaurant at the resort. No need to budget travel time in; drive your golf cart up to the facility and walk into the pro shop, past the statue of Pete Dye, the course designer.

In the past, warming up before your round was a straight­forward affair. There was a large putting green, and a sizeable driving range. But in May 2018, Casa de Campo unveiled a marvelous new Golf Learning Center, spread across 21 acres of grass. Run by Charlie Epps (who coached two-time major winner Angel Cabrera) the Center has indoor and outdoor hitting bays, swing lessons, golf fitting, all you need to tune up your game before a round—or to take some serious lessons.

The gear here is now top-notch. Rent a set and you’ll be playing with gleaming new Titleist irons and woods, and you’ll warm up with Pro V1s in the learning center.

There are few downsides to playing golf here. Yes, the pace of play can be slow, but that’s understandable given the desire to snap photos of the stunning vistas. And after the one-two-three punch of the gorgeous 15th, 16th and 17th holes, the inland 18th is a somewhat disappointing finish. But a round here will show you why Golf Digest calls Teeth of the Dog the best golf course in the entire Dominican Republic. A round costs $250 in season for hotel guests, $395 for non-guests.

Bring more balls than you think you need, as those ocean holes tend to devour your Titleists. After you finish, stop at the grill house, which serves a surprisingly good Cuban sandwich and has a small selection of cigars for sale. Order a cold drink and light your cigar. You’ve earned it.

Dye Fore
If you’re spending serious time at Casa de Campo, you must also play Dye Fore. Opened in 2004, this course is also picturesque, but you’ll see more green and less blue than on Teeth. Rather than the ocean, the course abuts the Chavón River.

Dye Fore ($236 a round in season for guests) has an 18-hole course and a nine-hole course, and each set of nine is named for nearby landmarks, Lagos, Marina and Chavón. The 18 holer is a 7,700-yard monster from the back tees, with a 139 slope and a 76.8 rating. Seven of the holes feature views of the Chavón River, some 300 feet below. You’ll also see the mountains, the marina and the sea in the distance.

Dye Fore isn’t as close to the main resort as Teeth, but you can drive your cart the 20 minutes or so to the facility, or take a shuttle. It lacked a pro shop until recently, but now it has its own area to buy balls and other golf gear, and the resort was in the process of building a short-game area on site for warming up as well.

After your round, consider exploring nearby Altos de Chavón, which features several restaurants and shops. 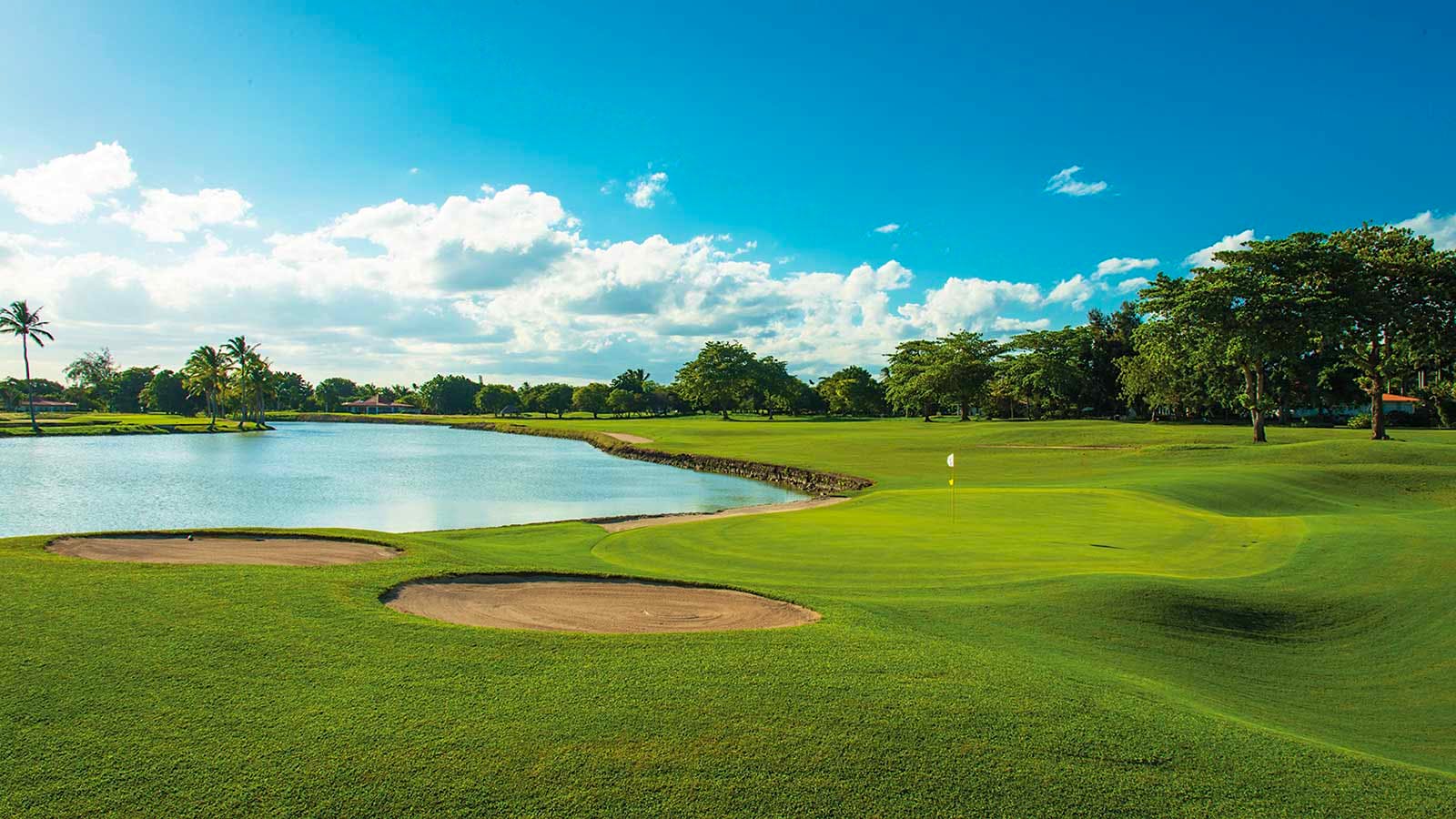 The third course at Casa de Campo isn’t in the same league as its bigger brothers, but it’s a good choice if you’re playing with newcomers who could benefit from an easier track.

The Links
The third course at Casa de Campo isn’t in the same league as its bigger brothers, but it’s fine to play if you’re looking to mix it up. Not as busy as the other two, The Links ($150 a round) is also a good choice if you’re playing with your children or newcomers to the game who could benefit from an easier track. Located just next to the pro shop, it shares the convenience of Teeth.

While the course plays easy from the upper tees, played from the longest of the five tee boxes, The Links is no pushover. Playing from the tips, the course is as long as Teeth of the Dog, but the slope rating is only 133, and you won’t have to contend with the wavering winds from the ocean.

“At least 50 percent [of visitors] play Teeth of the Dog,” says Robert Birtel, director of golf operations for Casa de Campo. “If they’re on a golf trip, they play all three.”

Improvement continues on all three courses, Birtel says, with an irrigation project nearing completion. By May of 2019, he says, “all three will have full irrigation.” GPS systems are being added to the golf carts.