La Flor Dominicana’s NFT cigar project is just about ready for the auction block. The first Golden Bull NFT (non fungible token) will be auctioned off on August 11, slightly later than originally intended. The NFT will be the only way to get the new cigar directly from La Flor. The auction is being organized by UREEQA, a digital validation company that is partnering with La Flor Dominicana on this project. The minimum bid will be $20,000. Seven NFTs will be auctioned off, each auction taking place at 48-hour-intervals.

“It’s an investment and it pays dividends in cigars,” said Tony Gomez of La Flor Dominicana, who was instrumental in creating the project, including the artwork design. Gomez was smoking one of the Golden Bulls during the interview with Cigar Aficionado. “Most NFTs are these art-based NFTs. I don’t get it…I just don’t see the value…but I do like the technology.”

Owning the NFT comes with the right to purchase up to 70 Golden Bulls per month, at a suggested retail price of $15 per cigar. The cigar is a lonsdale measuring 6 1/4 inches long by 42 ring gauge, much slimmer than the Andalusian Bull. The cigars come in 14-count-boxes. “NFT owners will be able to buy one to five boxes a month,” says Gomez. 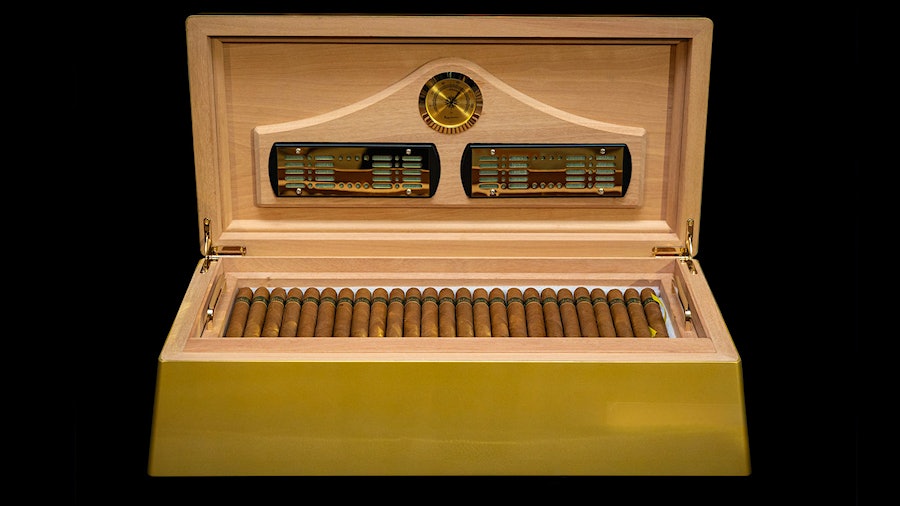 The seven NFT owners will also receive a personalized 50-count Gold Bullion Humidor. Made by Wacota Humidors in Madrid, the humidor has the company’s LFD logo on top of the lid, and that portion is made of 18 karat gold.

To protect the value of the NFT, La Flor Dominicana will not be selling these cigars to anyone other than the owners of the NFTs. They are free to resell the cigars (presumably cigar retailers will be among the interested parties at these auctions) and they can sell the NFTs themselves, transferring the rights to buy the cigars to someone else. But only the original owners will get the commemorative humidors from La Flor.

The Andalusian Bull is a huge, powerhouse smoke, 6 1/2 inches long by 64 ring gauge at its fattest point. The cigar is La Flor’s most acclaimed smoke, named Cigar Aficionado’s 2016 Cigar of the Year. The company makes it regularly, and will continue to do so, but it remains difficult to find at retail. The new Golden Bulls, due to the unique method of distribution, might prove even harder to find.

To stay abreast of the auction details visit nft.lfdcigars.com