Share
Joe Burrow sporting Cartier glasses and his AFC North champions shirt as he puffs on his victory cigar.

When you think of crunch-time, bright lights football, those critical games near the end of the season, what image comes to mind? If you’ve been following football the last few years, chances are you’re visualizing Joe Burrow somewhere puffing on a victory cigar after a big win. This past Sunday, Joe Cool was back at it again, strutting around the Cincinnati Bengals locker room with a large smoke hanging from his mouth after his team’s 27-16 win over the Baltimore Ravens to close out the NFL regular season.

The divisional matchup between the Bengals and the Ravens carried unusual weight to it. Last week, the Bengals game versus the Buffalo Bills was suspended and then ultimately canceled following a frightening incident in which Bills safety Damar Hamlin collapsed on the field, suffering cardiac arrest and was administered CPR on the field during a Monday night game. (Hamlin is awake, cognizant and has shown notable signs of improvement.) The end result of this once-in-a-lifetime scenario is that the Bills and Bengals have one less game on their record than the rest of the NFL. Adjustments were made by the league and Cincinnati was crowned champion of the AFC North division, shaking up the dynamics of this divisional matchup between the Bengals and Ravens. By the time the game rolled around Sunday, the two teams were playing to determine final playoff seeding and home-field advantage. A Ravens victory would have meant a coin-toss to determine who got home-field for the playoff matchup, but the Bengals were having none of that coin-toss scenario. Last season’s Super Bowl runner-ups came out of the gates hot, establishing a commanding early lead that the Ravens could never catch. 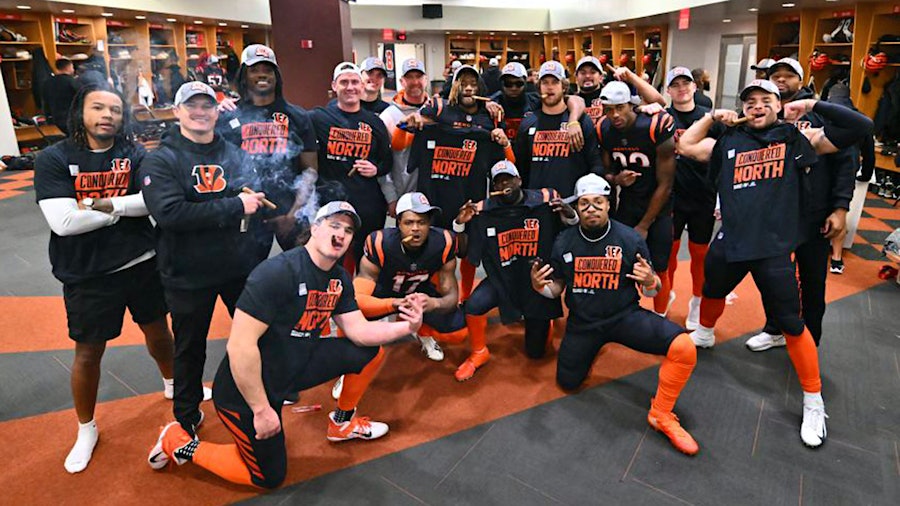 The Bengals special teams players gather around with their cigars while celebrating a crucial 27-16 win over the Ravens.

The Bengals victory meant it was time for celebration as back-to-back division champions, and victory cigars and t-shirts were at the ready, with the charge led by Burrow, who passed out smokes to his teammates before lighting one up himself. The star quarterback donned a pair of Cartier sunglasses and a shirt that read “Conquered The North” as he puffed what appeared to be a Cohiba Edición Limitada of some sort, although the precise identity of his cigar was difficult to make out. (And Burrow declined to comment this morning.) Other Bengals players were seen with the same shirts, many also with large, likely Churchill-sized cigars from various brands.

For Burrow, the victory cigar is becoming a staple of his identity. Fans first bore witness to the Joe Cool cigar tradition back in the first weeks of 2020 when he led the LSU Tigers to a 42-25 victory over Clemson to win the National Championship, capping off his historic Heisman Trophy-winning season. Following the victory, a short clip of Burrow became a social media viral sensation when he was seen sitting laid-back on a leather couch, still in full gear, puffing away at a cigar with a sense of complete contentment. Burrow has continued the tradition, notably a few times near the end of the last NFL season as he led his team all the way to the Super Bowl where they came up just short to the Los Angeles Rams. 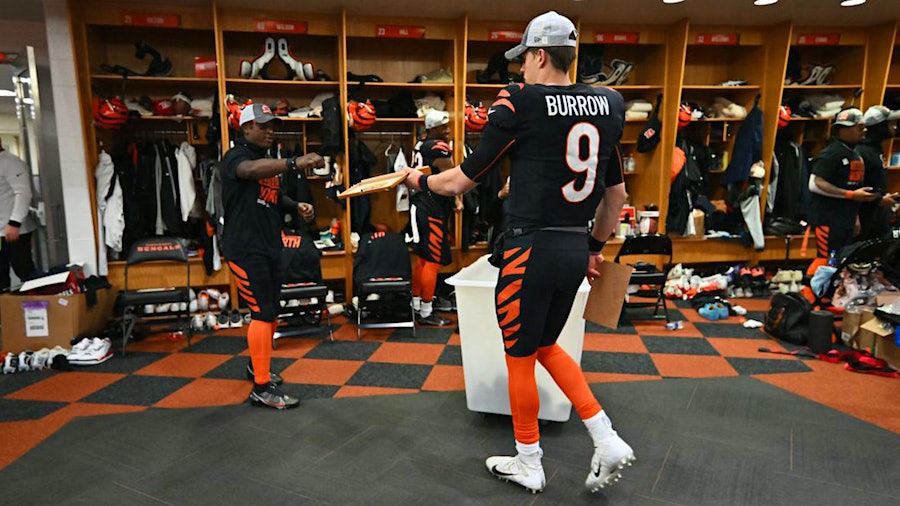 Burrow, ever the leader, hands out cigars to his teammates before lighting one up himself.

Burrow has become the athlete most synonymous with cigars and success since the legendary Michael Jordan. But to keep that image, the quarterback must keep winning. Next week, the NFL playoffs begin and the stakes become even greater. The Bengals are matched up with the Baltimore Ravens yet again, who hope to get their former MVP quarterback Lamar Jackson back from injury. The game will take place Sunday, January 15, at 8:15 PM at Paycor Stadium in downtown Cincinnati. If the Bengals can edge out the Ravens in back-to-back weeks, don’t be surprised if Burrow emerges in the locker room again puffing on a big post-game cigar.

Read Next: Tennessee Celebrates Victory Over Alabama With A 60-Year-Old Cigar Tradition

So many whiskies from Scotland owe their fascinating flavor to Sherry casks from southern Spain.