Share
Rush Limbaugh and Marvin R. Shanken at the 2019 Els for Autism Pro-Am.

In 1994 I held my first Night to Remember cigar dinner at the ‘21’ Club in New York City. The dinner celebrated the cigar, and the proceeds went to Prostate Cancer research. In attendance were a notable number of cigar enthusiasts from all walks of life. During the dinner, we all got to know each other, and I especially remember two guests at my table: Gregory Hines and Rush Limbaugh. The evening conversation centered around the joy that a cigar adds to our lives and its ability to create and build friendships. Gregory and Rush were on different sides of the political aisle, yet through smoking a cigar they became instant friends with mutual respect. The smoke-filled-room could hold 100 and every seat was taken. At the end of the evening, one guest after another spoke about how a cigar enhances their life. Rush was particularly eloquent that night and said “Tonight is one of the most enjoyable nights of my life. Marvin, you have my word: every year you hold this event, I will be here.” The dinner was later moved to the Four Seasons Restaurant, and even after Rush moved his permanent residence to Florida he kept his word—for 23 years, he never missed a dinner, and he always sat to my right. Typically, he would fly up in his private jet, come to dinner, and go back the same night.

I started the Els for Autism Charity Pro-Am in Florida 12 years ago. Rush was always on my team and he never missed playing. Last year, when he was in the throes of his health issues, he told me he would come and play nine holes. The same was true for the cigar dinner I throw every year at Old Palm Golf Club in Florida, which has gone on for more than a decade. Rush always sat by my side. 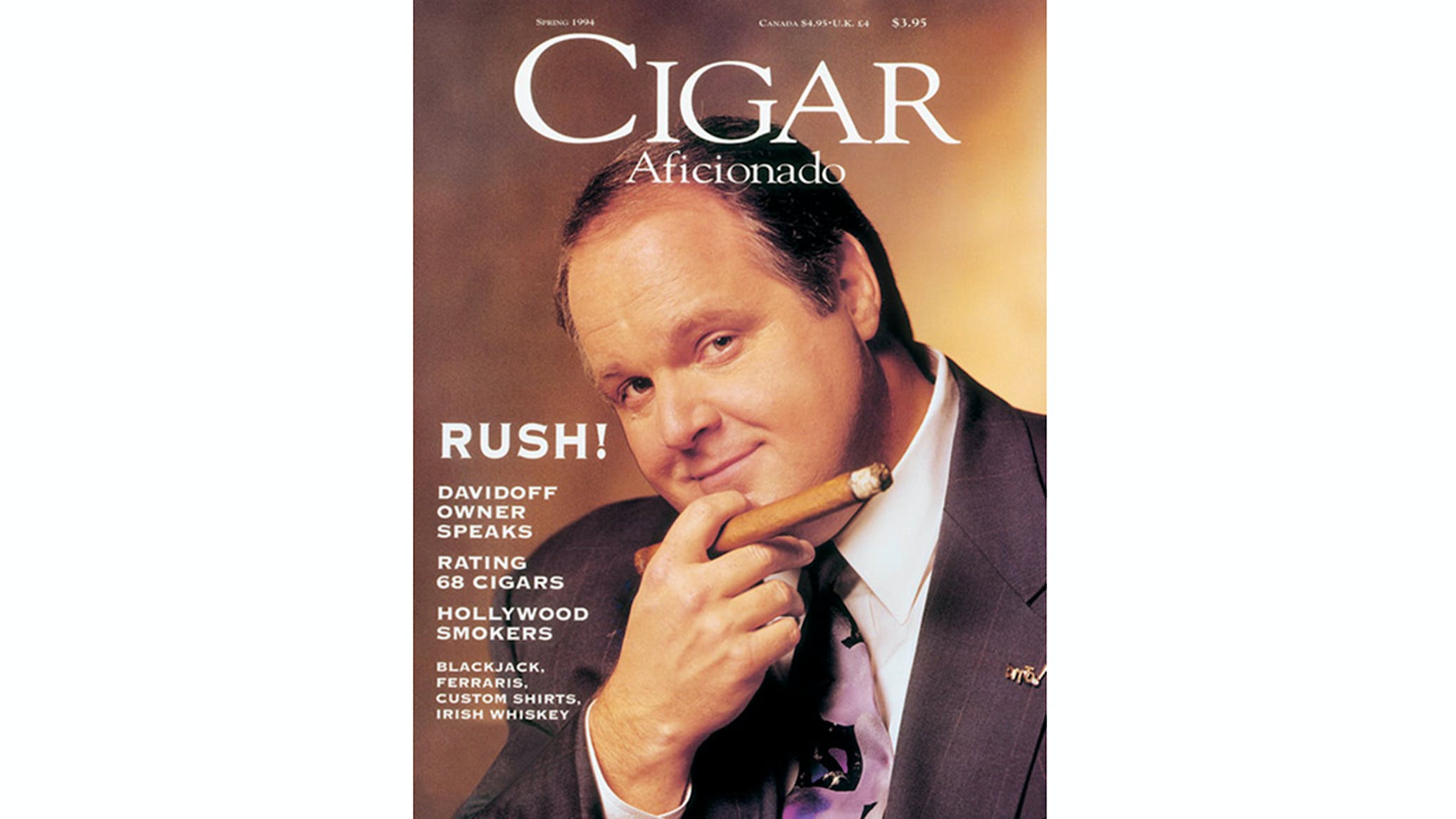 Rush Limbaugh on the cover of the Spring 1994 Cigar Aficionado.

In all of our time together at events and on the golf course people would come up to him and tell him how much they love him, and he was always gracious with their requests for photos with him. He was truly a man of the people. Today, on February 17, I received a news alert about his passing, followed by a flood of messages from my friends.

What nobody knows is that while Rush and I rarely spoke on the telephone, what we did do was constantly text. The contents of those messages could fill a 600-page-book. Going way back, we would talk about life, cigars and politics. We could always talk about people, the world, and the future. During election years we would go back and forth on the candidates, who would win and why, and what that meant for our country. Clearly, he was very savvy.

Rush, 70, was much too young to go. He was truly one of a kind. He was uniquely intelligent. But most of all he was gentle and kind, and very loyal to his friends.

Rush was an important part of my life for nearly 30 years. I can’t count the number of cigars we smoked together, just the two of us. While I will miss him, I also know that many millions of his friends and listeners across our country share in this loss.

Rush, rest in peace. With love,

Send us your letters of remembrance for Rush Limbaugh—we intend to publish them in a future issue of Cigar Aficionado. Send your notes to letters@cigaraficionado.com