Share
Chateau de la Fuente in an archival photo, prior to the storm damage. This is the birthplace of Fuente Fuente OpusX wrapper.

An intense and long-lived hailstorm destroyed several acres of cigar tobacco at Chateau de la Fuente in El Caribe, Dominican Republic on May 6. Ice fell from the sky, blasting holes in unpicked tobacco leaves, tearing down cheesecloth shade, damaging curing barns and wrecking seedbeds. In the aftermath, it appeared as if snow had fallen in the tropics, with workers chipping away at piles of ice that had gathered on the collapsed tenting that normally covers the fields.

The storm destroyed much of a 45-acre tobacco crop that was ready for harvest. Wrapper tobacco needs to be pristine, so any damage makes it unusable as cover leaf. Video from the storm’s aftermath shows crushed plants and leaves that were peppered with holes from the hail, making it look as if someone had blasted the tobacco with a shotgun. About another 120 acres worth of tobacco grown earlier in the season had already been picked, and was not damaged by the storm.

“We got hit pretty hard,” Carlos Fuente Jr. told Cigar Aficionado. “It was the strangest thing.” He said the storm lasted for more than a hour, and one of his workers told him that there was an “accumulation of ice never before seen in the region.”

Chateau de la Fuente is a farm where Fuente grows all of its wrapper leaf for the Fuente Fuente OpusX brand, one of the hottest cigar brands in the world. Fuente said that about 90 percent of the 45 acres of tobacco in the ground at the time of the storm had been destroyed or damaged. One priming from that field had already been taken. (Most cigar tobacco is harvested in stages, called primings, where workers remove leaves in groups of three, working from the bottom of the plant to the top, over a period of weeks.) 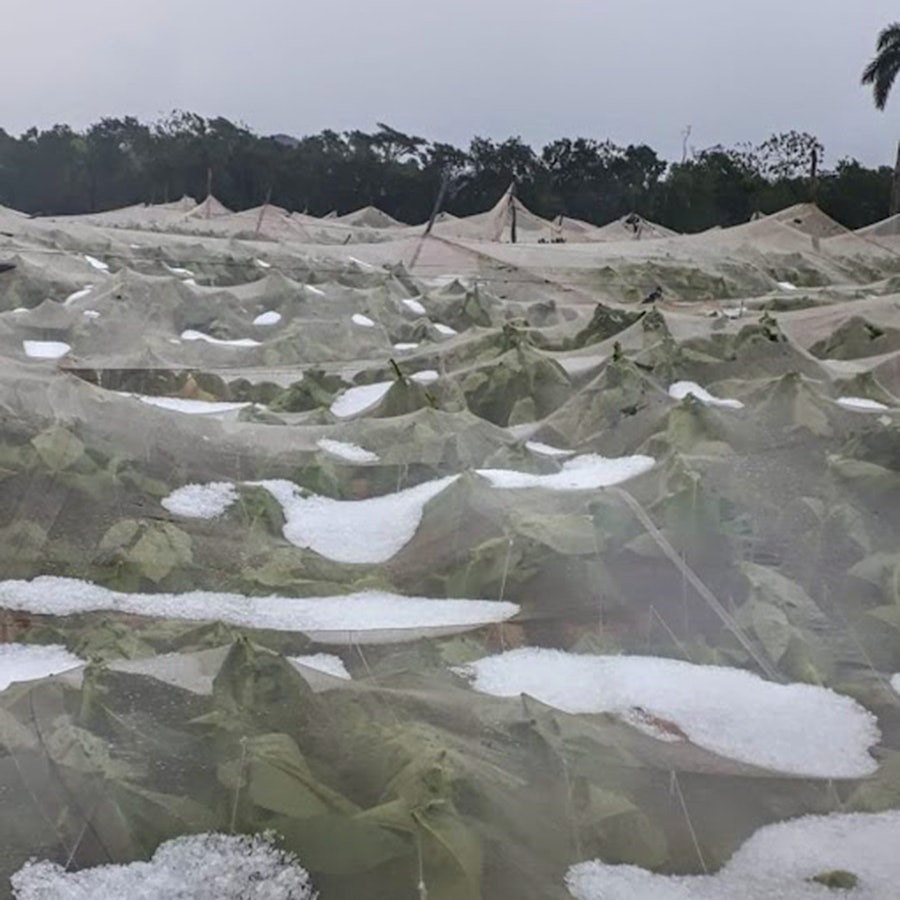 The extensive damage at Chateau de la Fuente, where a hailstorm collapsed acres of cheesecloth shade and crushed the tobacco beneath, leaving piles of ice in its wake. (Photo/A. Fuente Cigars)

In addition to all the tobacco, some of Fuente’s infrastructure was also destroyed: cheesecloth shade, poles, wires, even some damage to curing barns, warehouses and animal pens. “We’ve got damage to everything,” he said.

As bad as this was, it’s not as bad as other storms that have hit the farm. “It’s a bad thing, but it’s not the end of the world,” Fuente said. Hurricane Georges wiped the farm clean of its curing barns in 1998, resulting in Fuente temporarily halting production of OpusX (and the creation of Añejo.) Fuente said this storm won’t affect this year’s shipments, but he will cut back somewhat next year, to plan for future shortages with the smaller-than-expected harvest.

Prior to this hail storm, the weather had been superb for Fuente’s harvest. “This was the very end of the crop. This was a very good year,” he said.

Fuente was particularly shocked at the date the storm occurred, which happened to be the birthday of his father, Carlos Fuente Sr., who died in 2016.

After a disappointing 2018 season plagued by heavy, consistent rains, cigar tobacco farmers in the …