Share
The Cohiba 55 Aniversario Edición Limitada was launched with great fanfare in May. This multi-national event included countries such as Lebanon, Cyprus and Greece (shown here).

Although Cohiba turned 55 last year, the high-profile luxury brand is getting its anniversary party in September. Worldwide Cuban cigar distributor Habanos S.A. is holding the event in Havana on September 9.

The festivities begin on September 7 with a welcome reception at El Laguito Protocol Hall, a venue that’s been used for other anniversary celebrations during previous Habanos Festivals. The next day, tour groups can visit El Laguito, the famed converted mansion that today serves as Cohiba’s mother factory. The final gala evening will be held at the Pabexpo Fairgrounds on September 9. 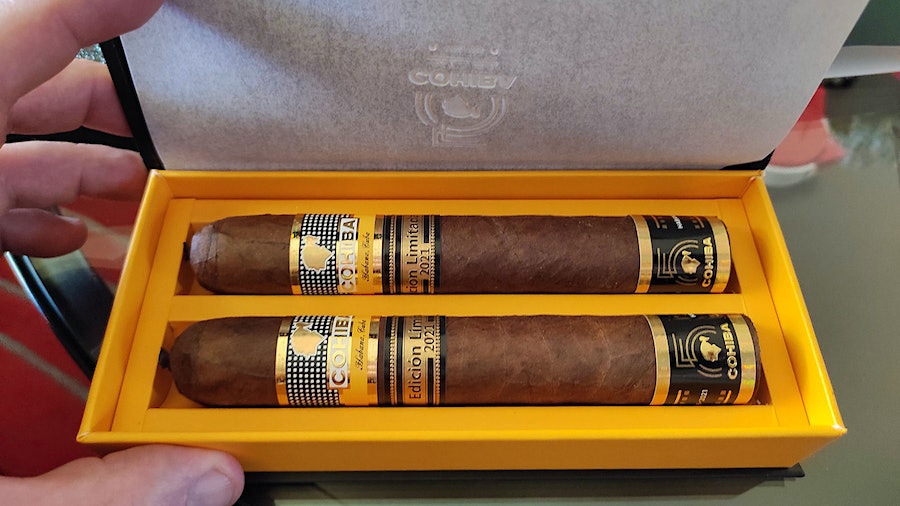 Small samplers like the one shown here are typically offered during Habanos dinners and celebrations. This pair of Cohiba 55 Aniversarios was handed out during the launch parties in May.

The Cohiba 55 Aniversario Edición Limitada 2021 is the commemorative cigar for the brand’s anniversary and was officially launched in May during a multi-nation event headed by Phoenicia Trading A. A., a regional Cuban cigar distributor based in Cyprus with one of the largest territories in the world. There’s no official word as to which cigars will be passed out in September, but the Cohiba 55 Aniversario will most likely be one of them.

The final evening will feature an awards ceremony and an auction of one-of-a-kind humidors filled with cigars, similar to the auctions held on the last night of the Habanos Festival. Proceeds from the auction benefit Cuba’s public healthcare system.