It’s cigar mania in the football world. Just a day after pictures of Joe Burrow and the Cincinnati Bengals smoking victory cigars were seen plastered throughout the internet, another football team celebrated a huge win in spectacular, cigar-smoking fashion. Last night, the Georgia Bulldogs made their best attempt to one-up the NFL franchise as the team lit up smokes on the field after winning their second-straight College Football Playoff National Championship in a 65-7 rout over TCU at SoFi Stadium in Inglewood, California. 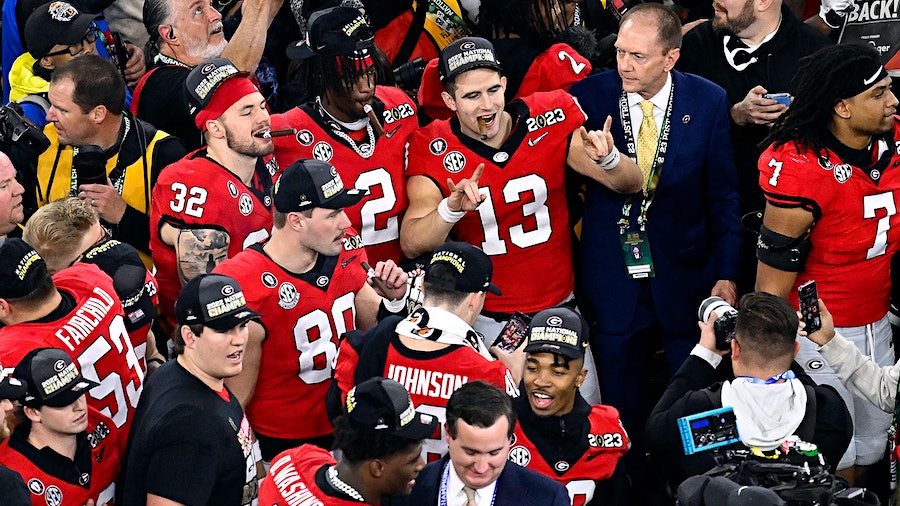 The star quarterback of the Georgia Bulldogs and Offensive MVP of the game, Stetson Bennett IV, was handed a cigar during his post-game interview with ESPN sideline reporter Holly Rowe, setting the stage for the smoky celebration that would soon follow. It was Bennett IV’s last college game, capping off a storybook career from former walk-on to back-to-back National Champion. After examining the available footage, it appears Bennett IV, at least at one point, was smoking a Rocky Patel Edge, though it’s hard to be certain.

The post-game celebration arguably offered more entertainment than the game, which wasn’t much of a contest as the undefeated Bulldogs completely outmuscled the underdog hopefuls from TCU. Other Georgia players were also seen with cigars of many different makes and brands, which they wasted no time lighting up. When you're back-to-back National Champions, you get to light up your stogies wherever and whenever you want.

Read Next: Joe Burrow And The Cincinnati Bengals Celebrate Sunday’s Victory With Cigars

So many whiskies from Scotland owe their fascinating flavor to Sherry casks from southern Spain.