It’s been more than 25 years since Carlos “Carlito” Fuente Jr. shocked the cigar world with the release of the Fuente Fuente OpusX, a cigar made with Cuban seed wrapper grown under shade in the Dominican Republic. That leaf became the signature for one of the most coveted brands in the cigar world, and to celebrate the milestone, Elie Bleu is releasing a collection of high-end accessories this October.

What you won’t find on this new version of Opus is the brand’s signature red color. Instead, this version uses green as its dominant color. Previously, the brand went blue for its 20th anniversary. This collection of accessories is a collaboration between Elie Bleu and designer Manny Iriarte, who has had a longtime working relationship with the Fuente family. 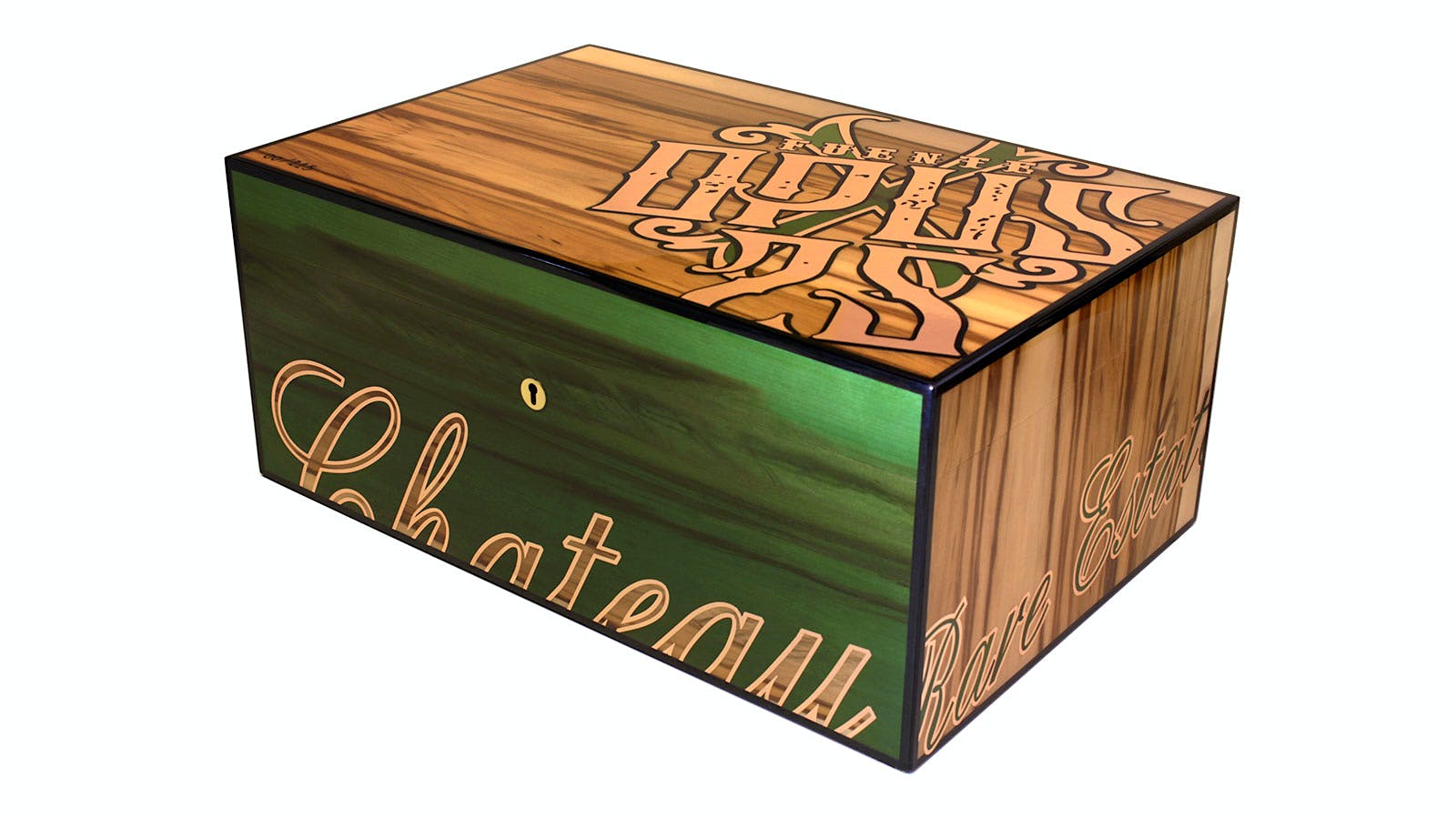 The Elie Bleu humidor comes packed with 25 limited-edition Fuente Fuente OpusX cigars that measure 7 inches by 50 ring gauge. The box itself is green and tan with wood accents, while the words “Opus 25” and “Chateau” can be seen on the top and front. Each cabinet also has marquetry and rose gold metal accents, and has a suggested retail price of $9,250. 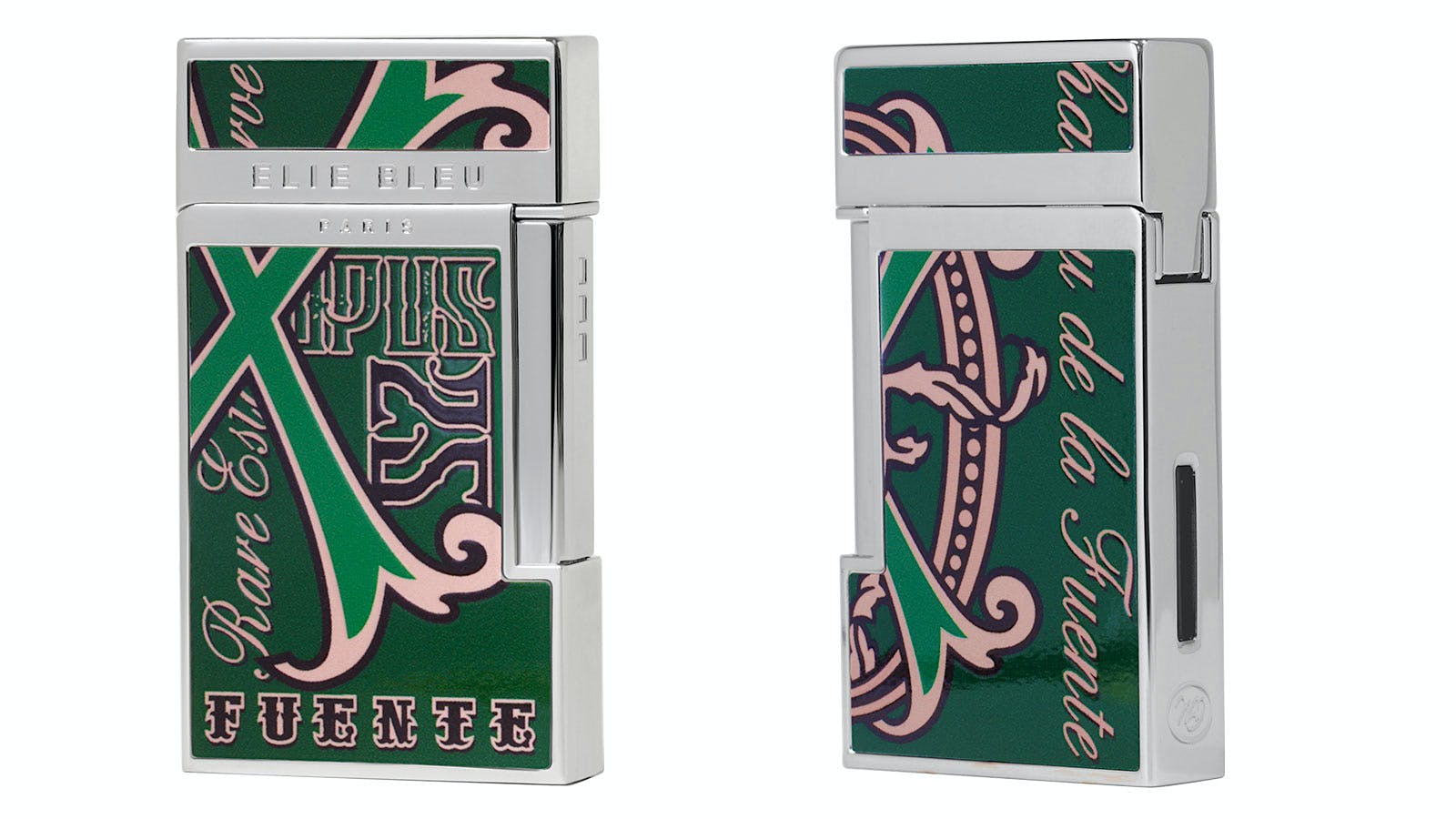 At $450, the Elie Bleu Jet Lighter is the most affordable item in the collection. The single-flame jet torch can store 1.5 grams of fuel and measures 1.5 inches wide by 2.75 inches tall. 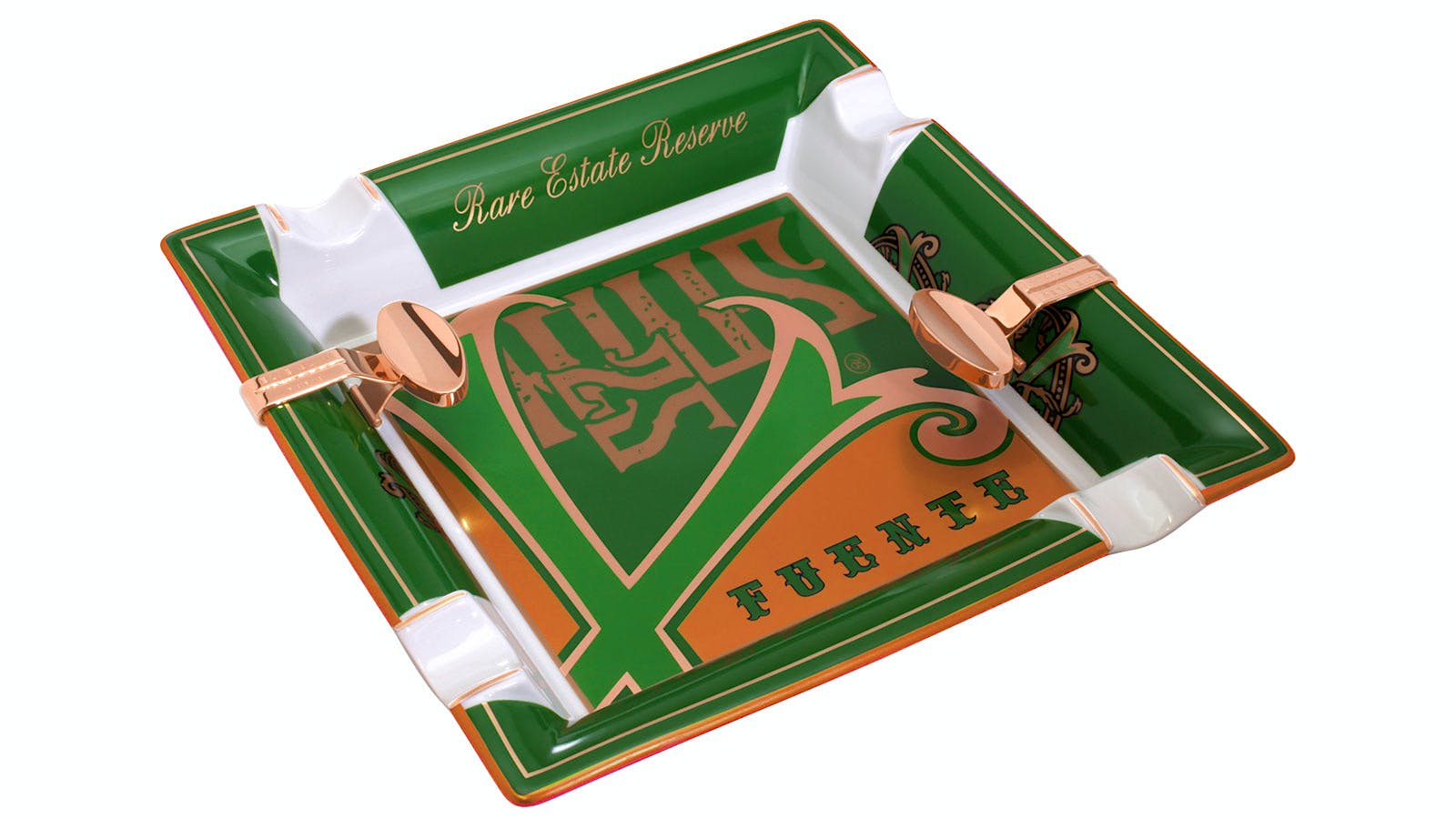 Limoges porcelain is a hard-paste porcelain that hails from France, the same country where Elie Bleu is headquartered. The ashtray is comprised almost entirely from the material. The 9 inch by 9 inch tray is 2 inches deep and also features two rose gold bridges. It sells for $1,130. 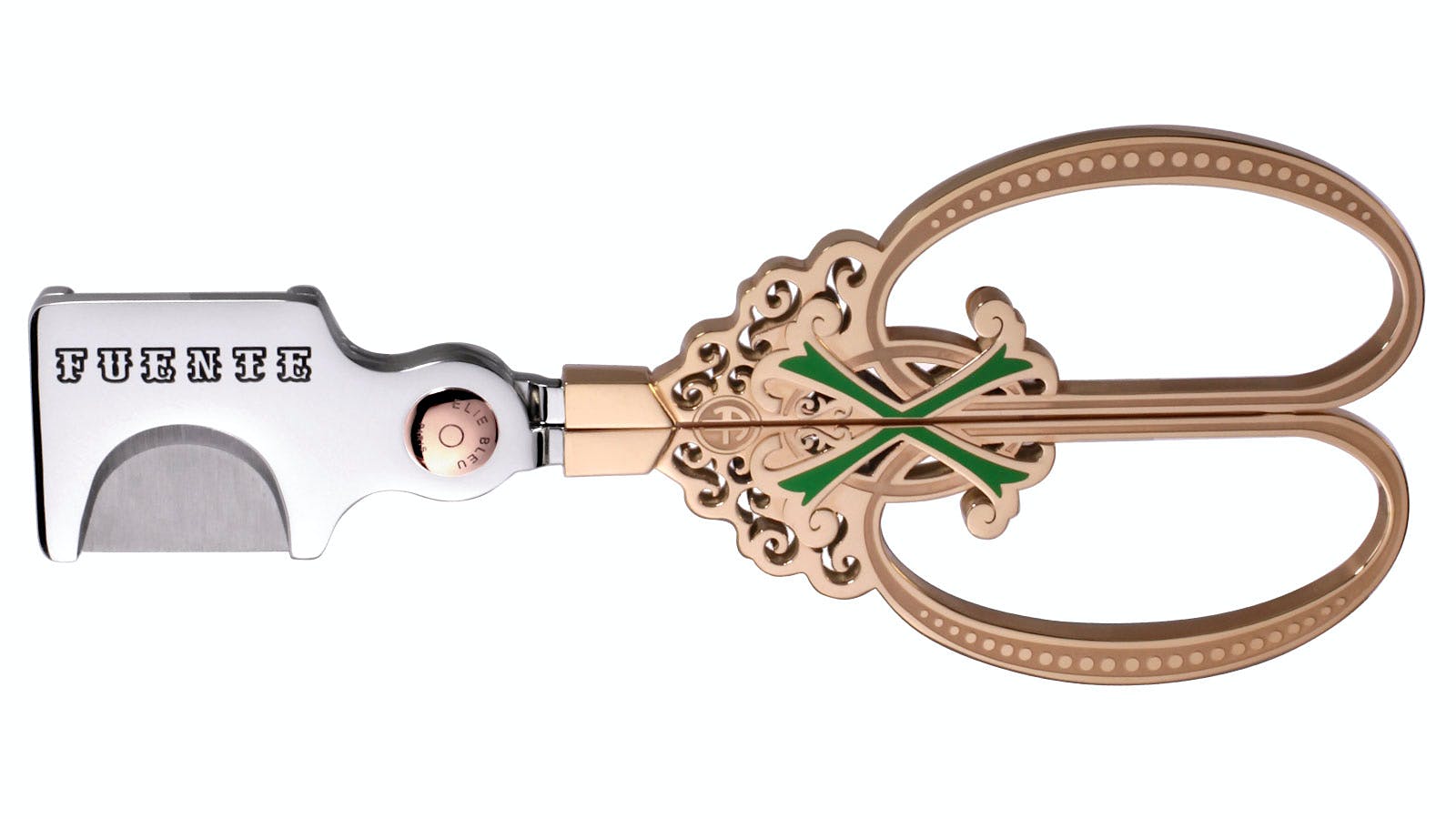 The Elie Bleu cigar scissors are stunning with rose gold handles and a green “X” inlay where the handles meet. Its blades are tempered surgical stainless steel. These luxe cigar trimmers sell for $480 a pair. 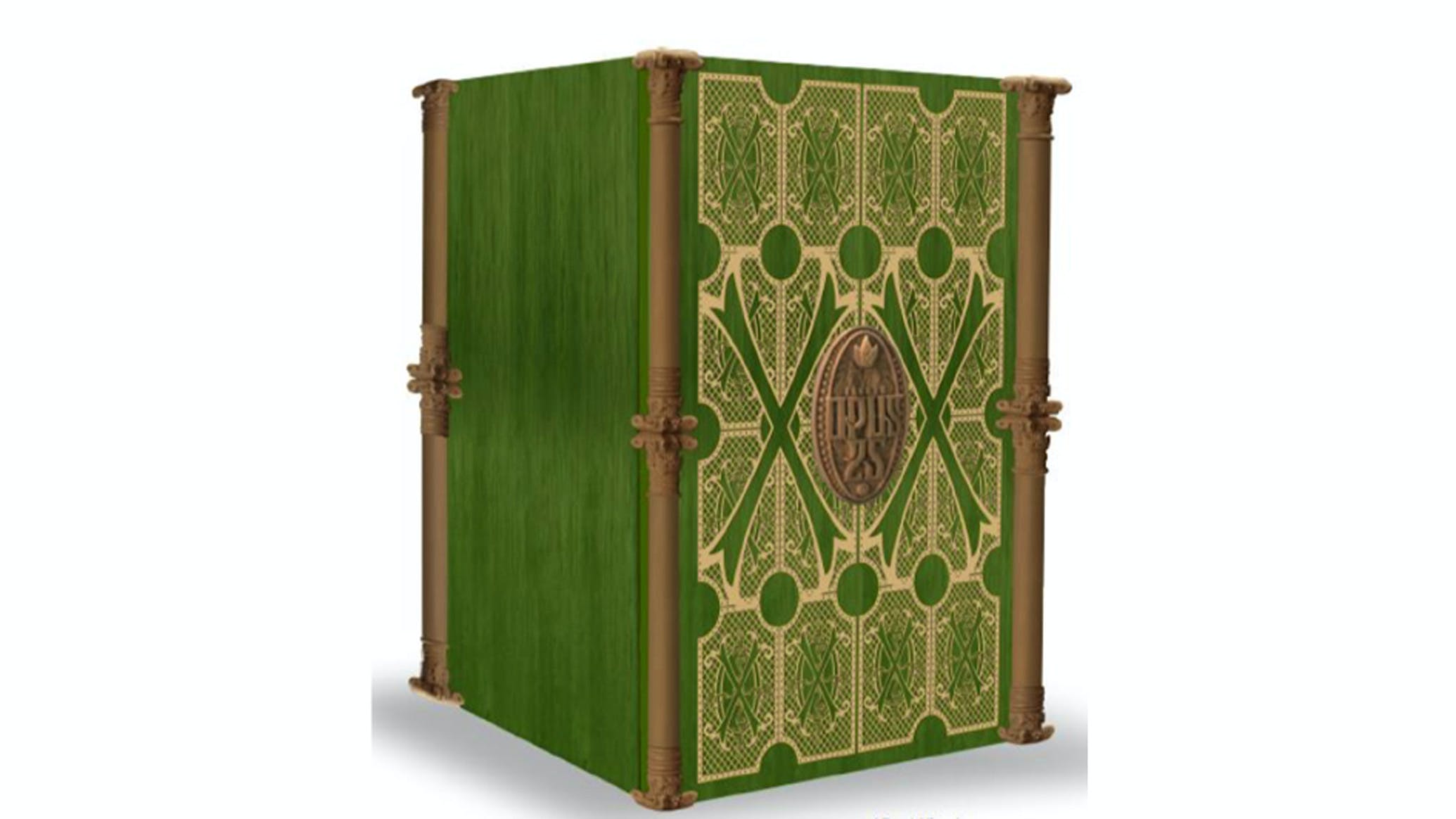 The most astounding piece in the entire collection is the Elie Bleu Fuente Opus 25th Humidor Cabinet, which comes with 144 limited-edition OpusX cigars. Its 15-inch by 15-inch square base rises to two feet up and the doors open like an armoire with drawers inside. It’s a green wooden cabinet made from red gum with marquetry and bronze adornments. It also comes with a J-14 limited-edition jet lighter and limited-edition cigar scissors. The suggested retail price is $70,000. Note: the above picture is simply a rendering of a prototype as the future release is still in development.
Dominican Republic Fuente Fuente OpusX Tabacalera A. Fuente y Cia.