Fuente Fuente OpusX cigars are rare. Running into Carlos “Carlito” Fuente Jr. in person is even more rare. But getting many members of the Fuente family together in one room, as well as Robert and Sathya Levin of Ashton Distributors is a true aligning of the cigar stars.

Fuente held a charity dinner and auction at New York City’s Grand Havana Room last week, and between ticket sales and the auction of rare cigars and fine wines, the event raised close to $300,000 for the Cigar Family Charitable Foundation, an organization created by Fuente and the J.C. Newman Cigar Co. Started in 2001, the CFCF has raised millions of dollars for the impoverished children of the Dominican Republic, and continues to do so.

The cigar night was hosted by Dr. Jude Barbera (longtime friend of the Fuente family) and MC’d by comedian and film critic Bill McCuddy, both of whom have been organizing Fuente charity dinners for many years. Fuente’s daughter Liana was in attendance, as was his sister Cynthia and her daughter Christina, all key contributors to the family-run operation. 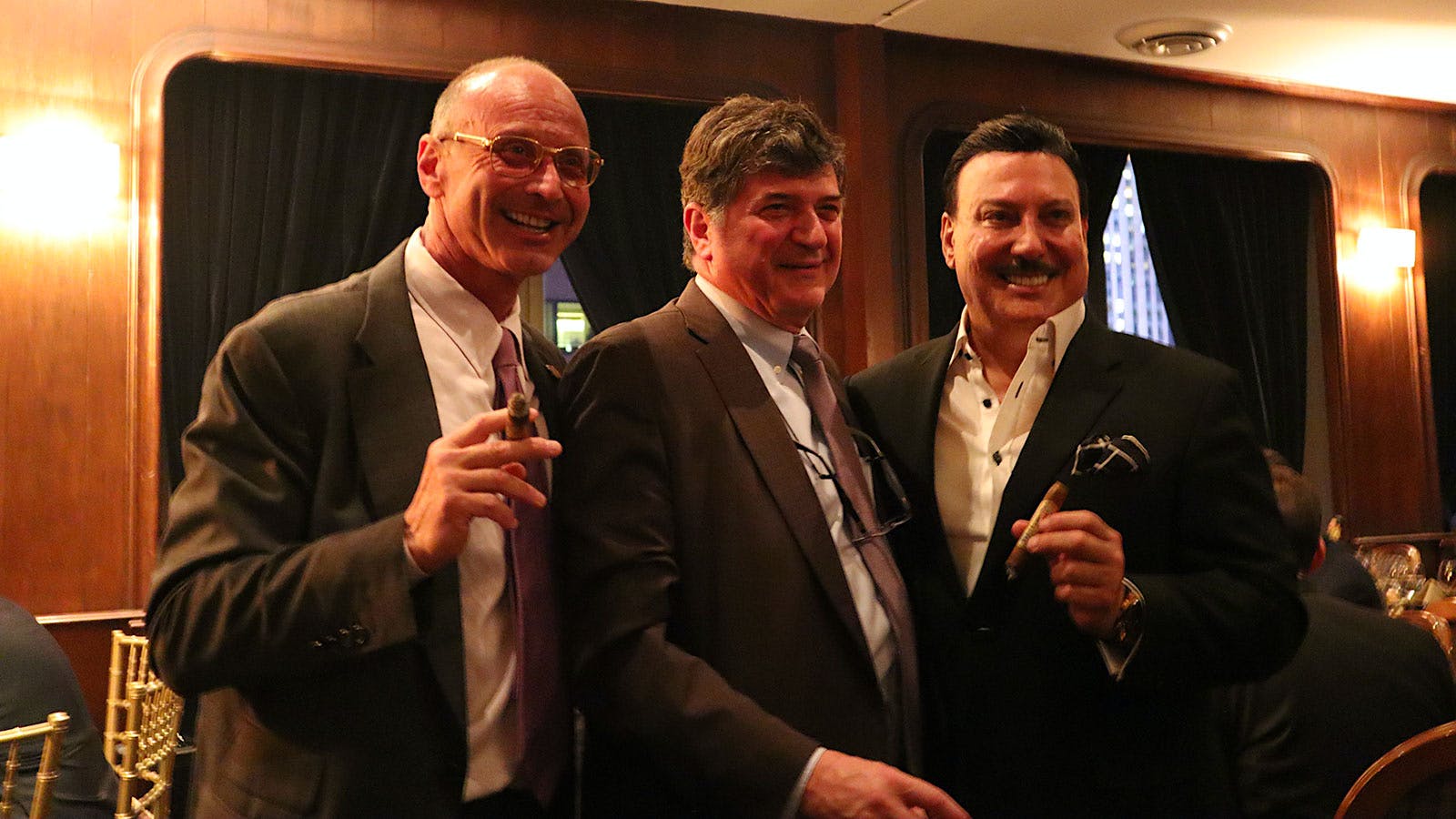 If you’ve never been to Fuente charity dinner, it normally starts off with a cigar cocktail hour, cigars during dinner and a parting gift of more cigars on your way out. The smokes are normally quite rare, and in some cases, one-offs made just for the event. Sometimes these cigars even end up on the secondary market. There are a lot of people who collect rare Fuentes.

So what did we smoke? First, during the cocktail hour, it was an Eye of the Shark, Cigar Aficionado’s Cigar of the Year for 2017. Then, during dinner, we were given a broad range of cigars from the more esoteric corners of the Fuente portfolio—Fuentexotica, as I like to call them—everything from a Fuente Fuente OpusX Destino al Siglo Double Corona to an “Opus Blue” 20 Year Anniversary Lancero to an OpusX LBMF, an exceedingly strong perfecto with Fuente’s signature mop-top cap. I look at such a showing as Carlito’s way of saying thank you to those who ponied up the $2,500 per head to attend his charity function.

And then there’s the auction, which turns up lot after lot of humidors loaded with nearly every kind of OpusX you can imagine: Angel’s Share, 20th Anniversaries, ForbiddenX, and probably a bunch of Opuses you’ve never even heard of. The wines were interesting, too. Most were California cabs donated by Celani Family Vineyards, most notably these huge, double magnums of the estate’s Ardore and Tenacious labels. Or maybe they were Methuselahs. The names for those oversized bottles can get confusing. 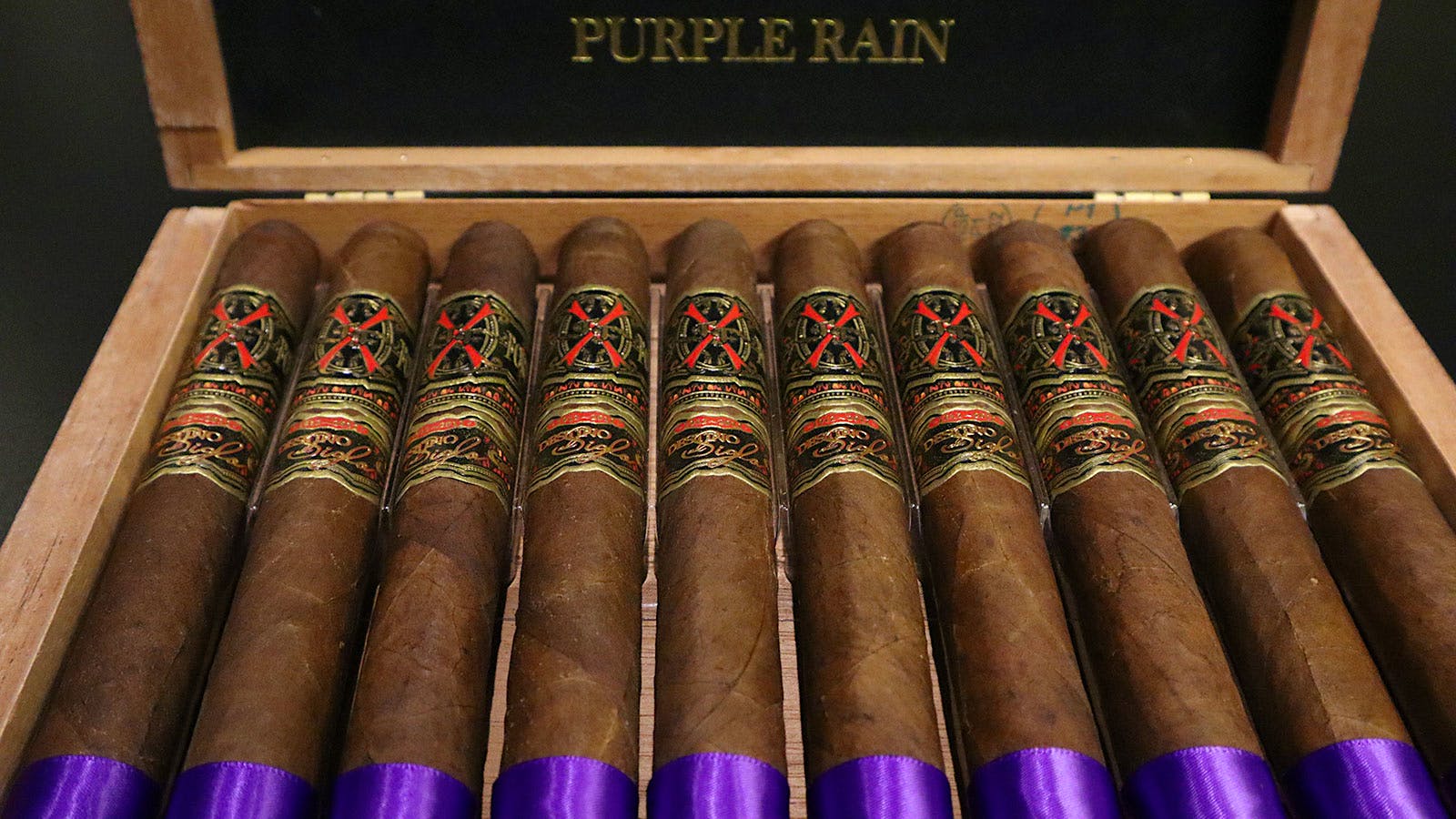 A box of Fuente Fuente OpusX ForbiddenX Purple Rain cigars in a Toro size made just for this charity fundraiser.

The auction was deftly handled by McCuddy, who kept the room awake and bidding for most of the night, but one lot in particular caused Fuente to pop up out of his seat, abandon his dinner and temporarily take over the auction. It was an OpusX Football. Ever see one? It’s an OpusX cigar shaped like a mini football and only offered at charity events.

Fuente reminded everyone that in addition to being a work of art, it’s also a functional cigar, and completely smokable.

“But really,” he said “it’s more about helping others less fortunate than you. I always say, in the end, it’s not about the cigars. It’s about the people.”

This is by no means the first time we’ve heard Fuente say this. And judging by the money he’s raised and the amount of financial support he’s put back in to the Dominican Republic, I’d say that he means it. For all the creativity that drives him to make new, interesting cigars, he’s become equally driven by philanthropy. 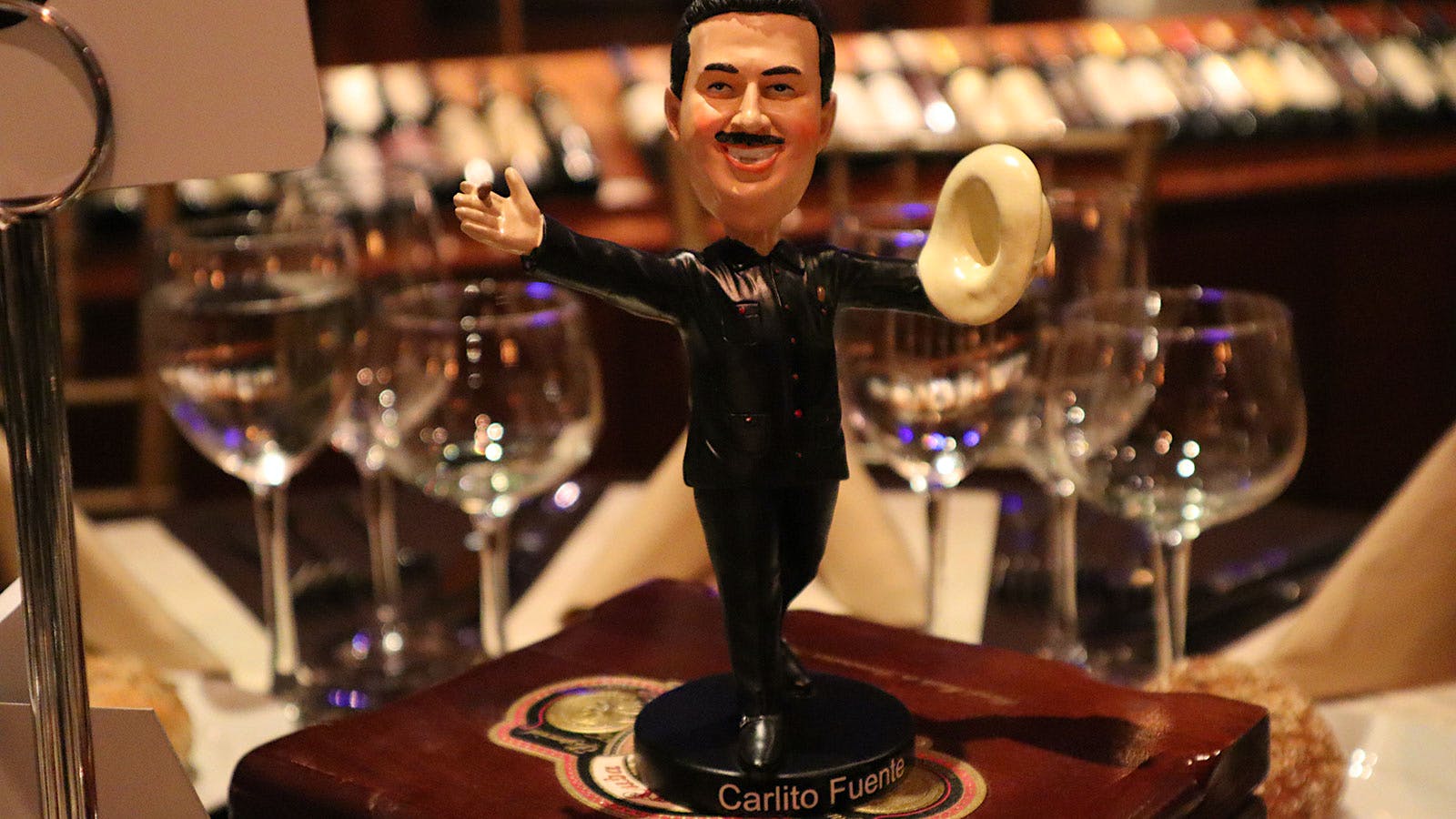 Each table had a Fuente bobblehead with an asking price of $500 for the charity.

Of course, I didn’t bid on anything. I leave that to the high-rollers and fanatic collectors who would rather miss a mortgage payment than miss out on a rare Fuente cigar. However, on my way out, I was handed a gift bag containing a gleaming purple box. I’ve seen Fuente boxes in glossy red, yellow and black, but never purple. Inside were 10 ForbiddenX Purple Rain cigars. Not the same Purple Rains that you see sold through Prometheus. This is a Toro size made just for the event.

I’m still not sure how this differs from other ForbiddenX cigars, nor do I know why he named it Purple Rain. Is Carlito a Prince fan? I’ll have to ask him the next time I see him, but who knows when that will be. I’m sure he was on a plane back to his factory in the Dominican Republic before the sun went down. And by the time he landed, he probably thought up countless new ways to give back to the country that gave birth to the OpusX phenomenon.