It’s finally here. The joint cigar project between Arturo Fuente and Padrón Cigars first announced in 2020 is ready to be shown to the cigar world, and on Sunday, July 10 the commemorative creation will be on display at the Premium Cigar Association trade show in Las Vegas.

Known as Legends, the project is a 40-cigar box, detailed with colors, symbols and photographs illustrating the long family histories of Padrón and Fuente, two of the leading cigar families in the world. Inside, there are two trays of 20 handmade cigars. One tray features cigars made by Padrón in honor of Carlos A. Fuente Sr., the former leader of Fuente cigars, who died in 2016. The second tray features cigars made by Fuente in honor of José O. Padrón, who died in 2017. The project is the brainchild of their sons, Carlos Fuente Jr. and Jorge Padrón, who run Fuente and Padrón today.

The two men were clearly excited about the project, but had little to say about the new cigars last night during a conversation with Cigar Aficionado, intending to keep most of the details hidden until Sunday. In a previous conversation, they said the cigars would measure 7 inches long by 50 ring gauge. 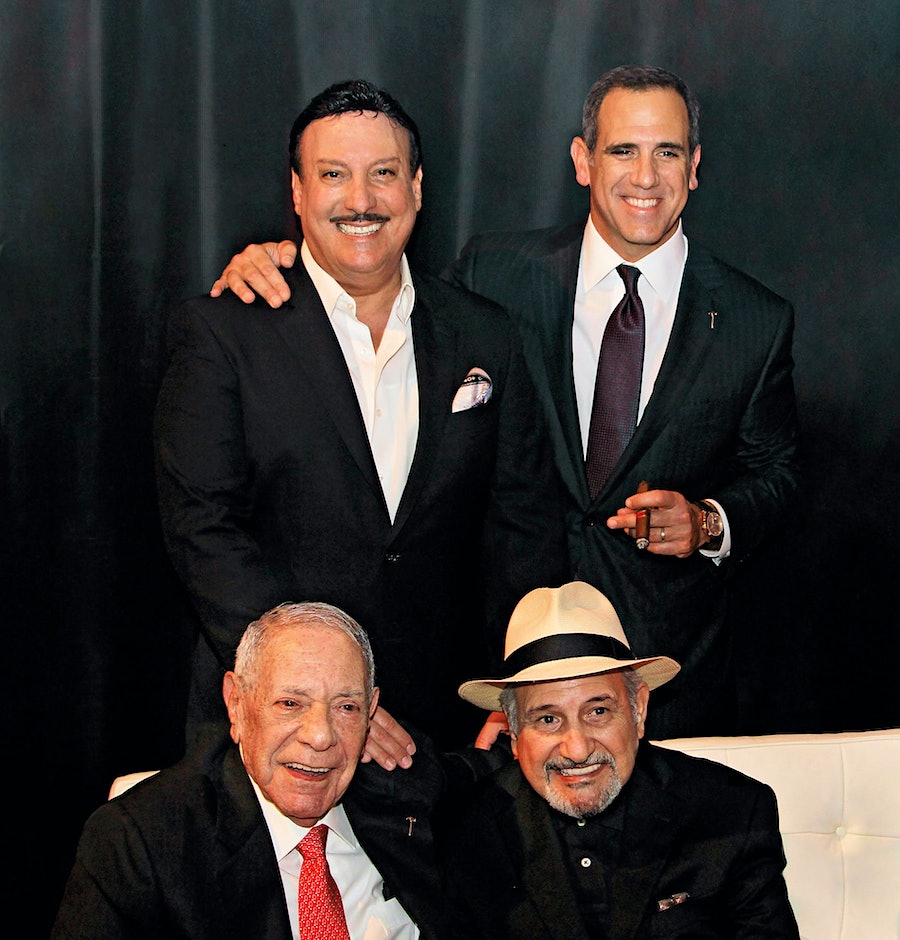 José Orlando Padrón (bottom left) founded Padrón Cigars in 1964. Carlos Fuente Sr. (bottom right) took his father’s Arturo Fuente brand out of Florida. Today, both men are gone, but their lessons live on in their sons, Carlos Fuente Jr. (top left) and Jorge Padrón (top right). Both men honor their fathers by continuing the family traditions, while forging new paths of their own.

A percentage of the proceeds from the sales of this collaboration will be donated to the Cigar Family Charitable Foundation and the Padrón Family Foundation.

Each man has blended their commemorative cigar independently of the other. “I’m putting my father in his hands, and he’s putting his father in my hands,” Jorge Padrón has said.

“I would not consider doing this with anybody else,” said Fuente. “The love for our fathers is so great. There’s nothing that motivates us more.”

Last night, the men were together, drinking Scotch to toast their departed fathers. (Fuente was drinking Chivas, his father’s favorite brand, while Padrón was sipping Pinch, the preferred whisky of his father.)

Legends has been in the works for a considerable amount of time. The first news of the collaboration broke on cigaraficionado.com in October of 2020, and back then the plans were to release the cigars in 2021.

The new project will be on display Sunday July 10, at 3:30 pm at Booth 1321 at the PCA trade show, near both the Fuente and the Padrón areas on the showroom floor.