My Father Cigars, two-time winners of Cigar Aficionado’s Cigar of the Year, is putting the final touches on the Flor de Las Antillas 10th Anniversary Limited Edition 2022. It’s a new version of one of the company’s most heralded brands, a one size, small-production release it hopes to have on display at the PCA trade show in July. Shipments to cigar shops will follow later in the year.

The cigars are made in Nicaragua, and will be presented in ornate, numbered boxes containing 12 cigars, each of them presented in individual wooden coffins. The boxes are striking, with a golden label near the bottom right corner of the lid showing the number of the production run. The 12-count boxes are an homage to the year 2012, when the Flor de Las Antillas Toro was named Cigar of the Year. It was the first time the Garcia family, owners and makers of My Father Cigars, won that award. 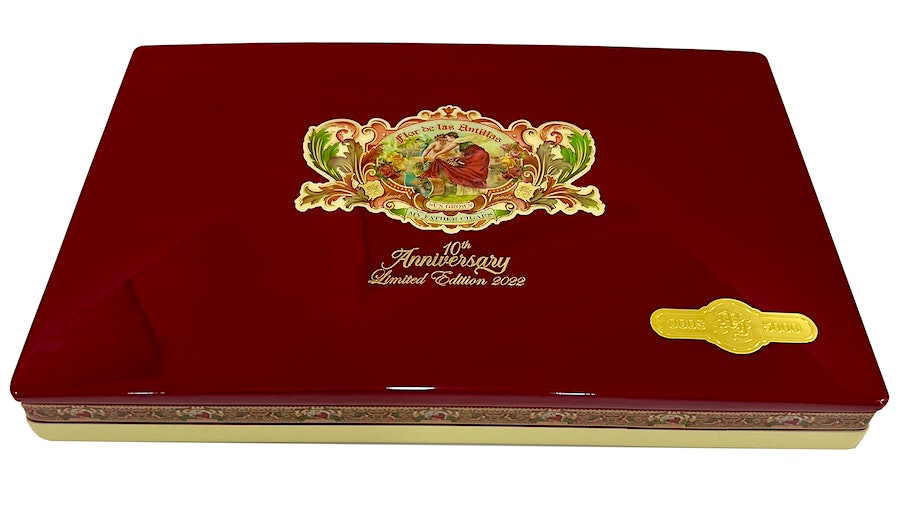 The new smokes measure 6 1/2 inches long by 52 ring gauge, and while the all-Nicaraguan blend has a certain familiarity to the traditional Flor de Las Antillas, it has been modified, with tobacco from different farms, all of them owned by the Garcias.

“The wrapper is very similar, same seed, but it’s darker,” said Jaime Garcia, standing in his Miami-area headquarters and showing off a prototype of the box and the cigars. He suggested the cigars would be a bit stronger than the traditional Flor de Las Antillas, calling the strength of this limited-edition “medium plus.”

Only 5,000 boxes are slated for production, or 60,000 cigars in total. The Garcia family, owners of My Father, have yet to determine pricing.

Flor de Las Antillas has been an exceptional performer in Cigar Aficionado and Cigar Insider blind tastings. Over the brand’s 10-year history, we have awarded it 17 scores in the 90s, and only six in the 80s (five of those were 89-point-scores.) The highest score it’s ever received was 96 points, for the Toro, when it was named Cigar of the Year. The brand literally translates as “flower of the Antilles,” an homage to the Garcias' birthplace of Cuba, the largest of the Caribbean Sea’s Antillean islands.
Flor de las Antillas