The other night I met up with my good friend Mark at Grand Central Terminal. We had a drink at the Oyster Bar Saloon, caught up on recent events and kept stealing glances at our watches. Soon, it was time. We headed upstairs to the clock at the center of the building, surrounded by an ocean of commuters rushing to and from the tracks.  He looked left, I looked right, and soon he spied them—our two teenage boys, walking in our direction.

We hugged each of them hello and headed out into the city, walking west and south. We were heading to Keens Steakhouse, for our traditional Father-Son Steak Night.

Our sons are classmates at the same high school, longtime friends who have known one another since they were in pre-school. Last night we were continuing a tradition we began when they were only eight years old, having dinner with them in a grand New York City steakhouse. Not the whole family, just the dads and our boys. We spend a few hours together, taking time to chat over good beef, crack a few jokes and bond. We hear about what’s going on in their lives, try to give them a little advice on growing up and absolutely enjoy the time together. 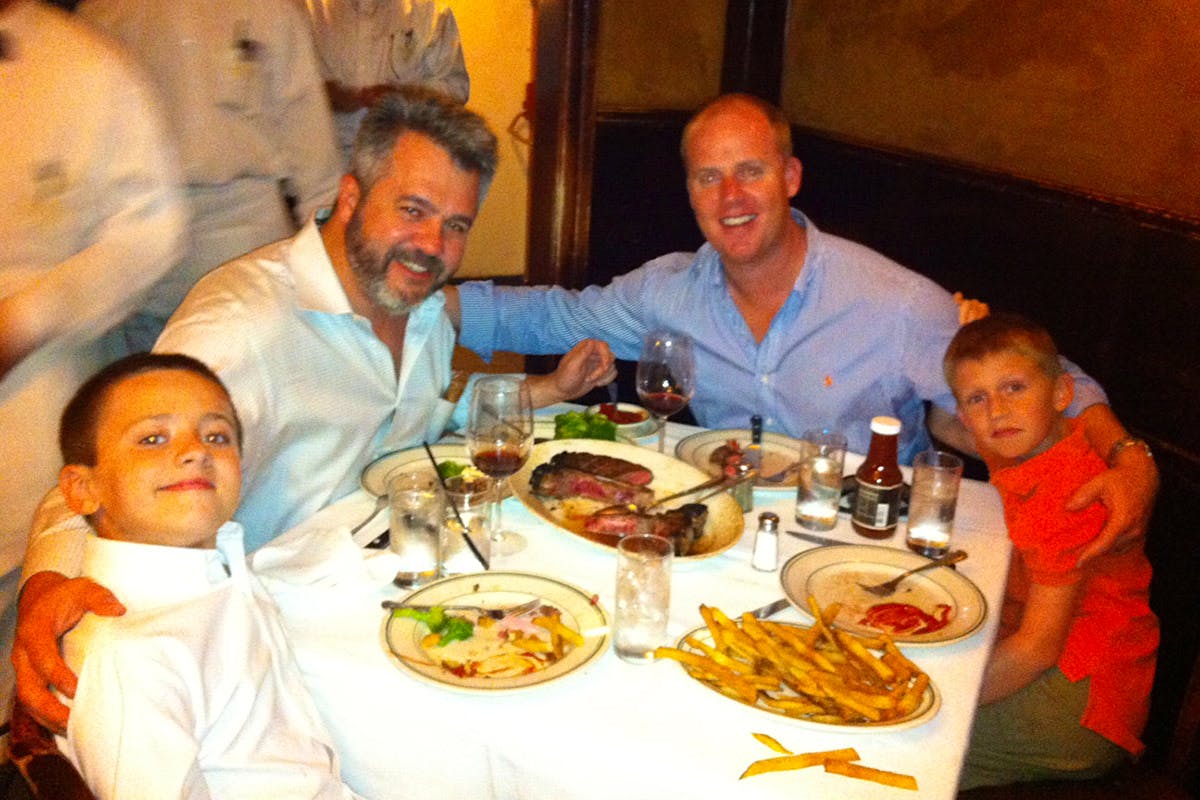 The inaugural Father-Son Steak Night at Wolfgang’s Steakhouse in 2011.

It’s turned into quite the tradition. That first time, back in 2011, we went to Wolfgang’s Steakhouse on Park Avenue and 33rd Street, just a few blocks from Grand Central, and sat down beneath the restaurant’s vaulted, white-tiled ceiling. We ordered two steaks—one medium, one medium-rare—and made sure there was a side of fries for the kids. They were little guys back then, and at that age they could barely put a dent into the meat.

The second time was a couple of years later, at Michael Jordan’s Steakhouse, located right inside Grand Central. They were a little older, a little bigger, and the conversation became a little more involved. Then, as they became middle schoolers, it was off to Smith & Wollensky, a grand steakhouse that serves some of the best beef in the city. When we sat down to talk we spoke a little bit about girls and about how their lives were changing.

This most recent dinner at Keens was superb. The restaurant itself is a piece of history, its ceilings filled with long-stemmed, churchwarden pipes made from clay. These slim pipes are too fragile to carry with you, so back in the day when pipe smoking was a big deal (Keens has been open since 1883) the restaurant employed a pipe warden, who would log in your pipe and keep a record showing just where it was located in the building. After your meal, the pipe boy would bring your churchwarden to you, and you would fill it with tobacco, light up, and puff in peace while you digested. The pipes were so popular that Keens says more than 90,000 were part of its pipe club.

Today, of course, someone would call the real wardens on you if you lit anything in a New York restaurant, so all those pipes are there for decoration only. A few especially notable ones sit on display near the maître d station, showing the names of their famous owners: Babe Ruth, Teddy Roosevelt, Will Rogers and Gen. Douglas MacArthur, to name a few. 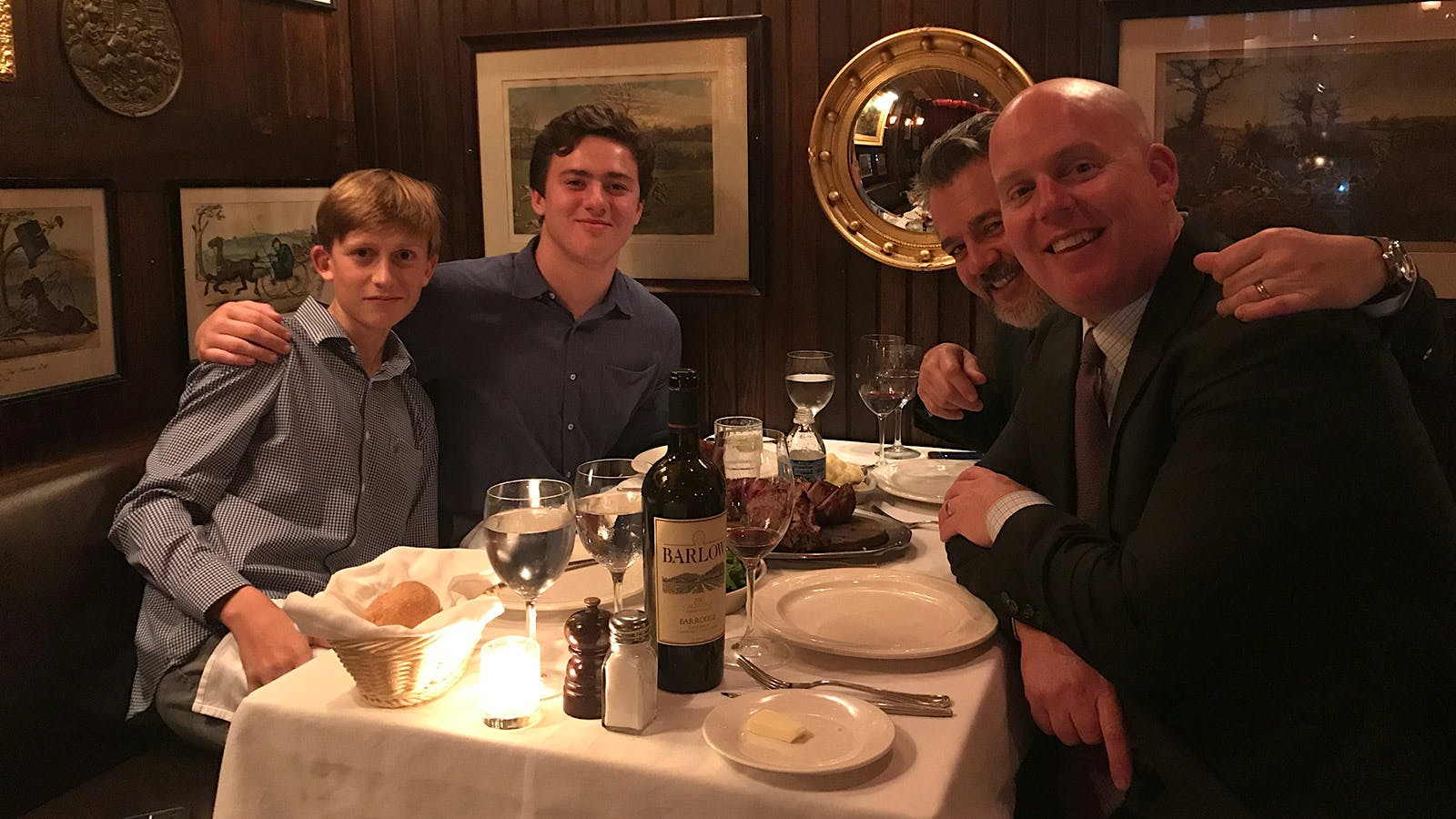 The 2018 dinner at Keens Steakhouse.

Our boys are in high school now, and they’ve grown into young men. Their interests and appetites are quite unlike what they had back at that first Father-Son Steak Night seven years ago. French fries have given way to shrimp cocktail and lobster bisque, but the main course remains similar. At Keens it was a massive porterhouse, cooked beautifully, served medium-rare. There wasn’t a slice left when we were done. Mark and I paired our beef with a good Napa Valley cabernet.

Our boys are getting older, more independent. Yesterday they rode the train in alone. We talked about how, next year, they can probably just meet us at the restaurant and find their way through Manhattan on their own. One day, not too far off, they will be able to drive. Soon after, we will be able to have them join us for a post-dinner cigar if they so desire.

We vowed to repeat this dinner again, soon. All four of us enjoyed the night together. And hopefully, many years from now, our boys will repeat the tradition with their own children.

It’s my hope that their memories of these dinners will be as fond as mine.