It’s likely that you’ve tried a cigar from the La Historia brand made in the Dominican Republic by E.P. Carrillo. You may have even tried every size, but you’ve never had El Roquito and you probably won’t, unless you’re heading out to the Big Smoke Las Vegas this weekend at the Resorts World Events Center. The unique size is made exclusively for Big Smoke attendees and is just one bonus that E.P. Carrillo is offering. The two-time Cigar of the Year winner is also raffling off cigars made with commercially unreleased blends.

Measuring 5 inches by 50 ring gauge, El Roquito is a box-pressed robusto made at E.P. Carrillo’s La Alianza factory in the Dominican Republic. The blend is the same as others in the La Historia line, with a dark Mexican San Andrés wrapper, Ecuador Sumatra binder and all-Nicaraguan filler. As of now, E.P. Carrillo has no intentions of releasing El Roquito to consumers. 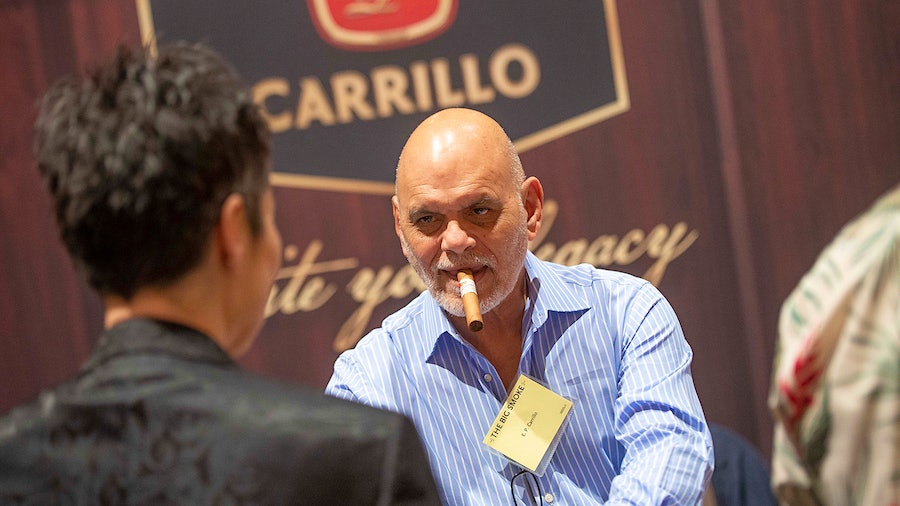 Ernesto Perez-Carrillo handing out a cigar to an attendee at a previous Big Smoke Las Vegas weekend. (Photo/Jacob Kepler)

In addition to the exclusive cigar, E.P. Carrillo is also offering a unique raffle solely for guests of Big Smoke. In celebration of the 10-year anniversary of Inch, one of E.P. Carrillo’s best-selling brands, the cigar company will be raffling off four sets of big ring gauge cigars featuring blends that have never been released.

“I am always up for a challenge when it comes to blending. I enjoy blending big ring gauge cigars and these were especially fun to work on,” said Perez-Carrillo. The thick ring gauge smokes are a nod to the Inch brand, ultra-fat cigars that come in 60 ring gauge and larger.

Only Big Smoke Las Vegas attendees will be able to enter the raffle and can do so by filling out a form at the event this weekend. Four winners will be announced on an Instagram reel the week of November 14.