Share
A field of tobacco and a curing barn at José "Jochy" Blanco's farm in Jacagua, the Dominican Republic.

The weather has been unusually dry in the Dominican Republic over the last few months, and while that lack of rain has meant a lower volume of tobacco coming from the fields, this growing season has produced perhaps the best crop in terms of quality in 20 years.

“It’s a historic one,” says Litto Gomez of La Flor Dominicana who grew more than 100 acres of Piloto Cubano on his La Canela farm. “When there is no rain and you have irrigation, then you are in control of the water and, pretty much, the quality,” he explains. According to Gomez, in dry conditions, he can hold back water, which naturally forces the root systems of a tobacco plant to expand and dig deeper into the ground in search of moisture.

“A bigger root base means that the roots can provide more nutrients to the leaf. So far, our best recorded crop was in 1998. This will be equal or even better," Gomez said.

Gomez’s tobacco ends up in his La Flor Dominicana brands, which are also made in the Dominican Republic.

Hendrick Kelner, vice chairman of Tabadom Holding Inc. and global ambassador for Davidoff cigars, echoes Gomez's opinion that this is a high-quality crop. He has been growing tobacco in the Dominican Republic for decades.

“It has been the driest season with less rainfall than many years,” he tells Cigar Aficionado. “It has not been possible to plant in areas that have no irrigation, but in the irrigated areas, the tobacco will be stronger and healthier because there won’t be traditional diseases like Blue Mold and Black Shank. It will be quality tobacco.”

Kelner cultivates about 570 acres of tobacco in the Dominican Republic, primarily the Piloto Cubano and San Vicente varietals. The majority of his crop for this season has already been harvested. Although the final numbers are not in, Kelner estimates that his farms have produced 65,000 to 70,000 pounds of tobacco. Most of it goes towards brands like Davidoff and the Avo series of cigars.

Despite stronger, high-quality tobacco, the dry season also meant that less tobacco in general was grown across the Dominican Republic. 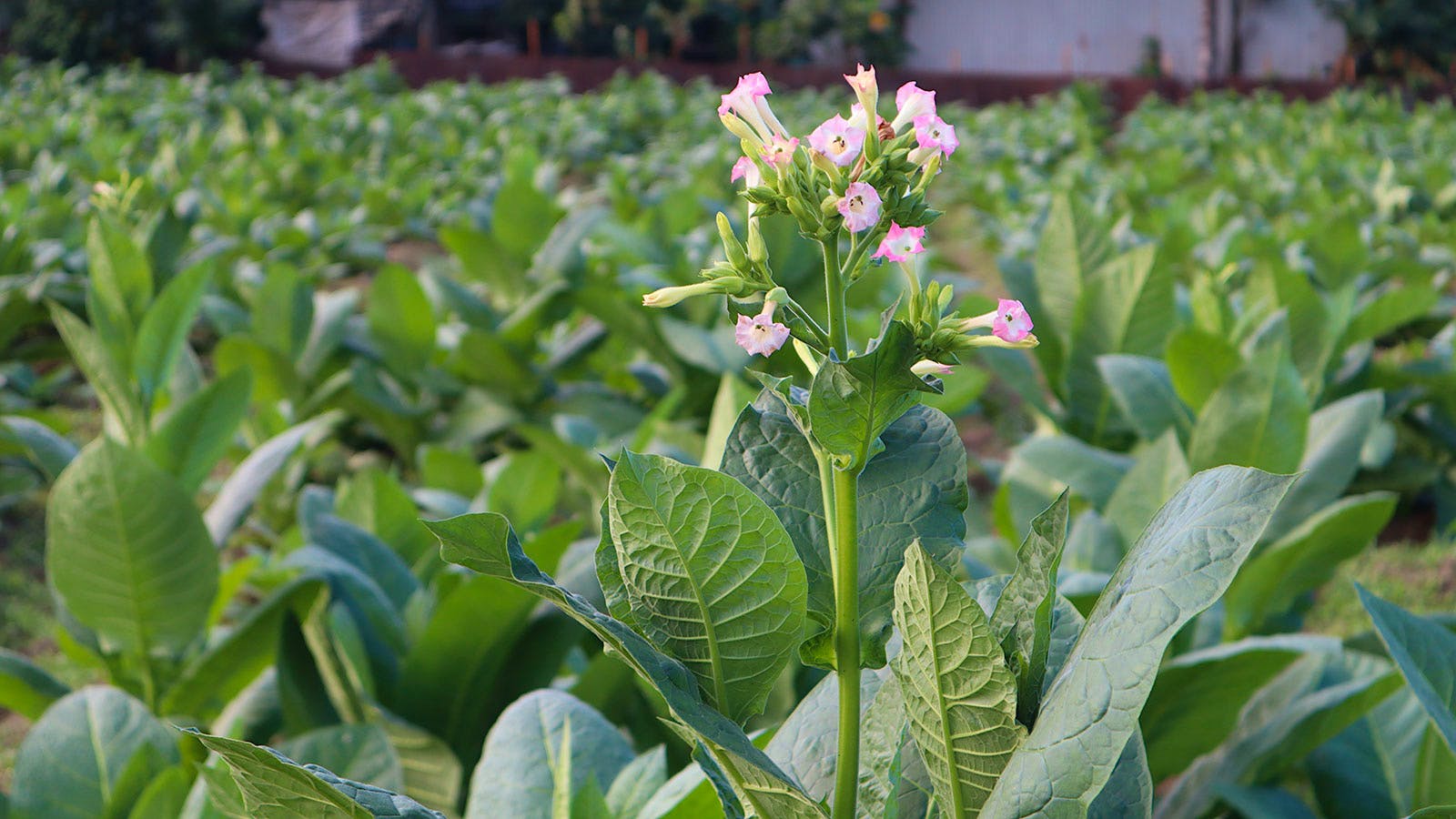 A detail of Dominican Olor tobacco that still has its flower.

“The 2018-19 tobacco crop has experienced lower-than-average rainfall,” says Siegfried Maruschke of Jose Mendez & Co. S.R.L., a tobacco growing and brokerage company. He added that less rain resulted in less tobacco. “So far, if things don’t change, we can expect a decrease of 25 to 33 percent in overall production of tobacco this year.”

Jose Mendez & Co. grows about 2,470 acres of tobacco in the Dominican Republic, mostly Piloto Cubano but also a significant amount of Olor. Normally, Maruschke produces between 3.5 million to 4 million pounds of tobacco each season, much of which is sold under contract to supply Altadis U.S.A., makers of the non-Cuban Montecristo and Romeo y Julieta brands.

“Although the present drought is affecting the yields of tobacco,” Marushcke adds, “this drier environment is beneficial for increasing the proportion of stronger medio tiempo and ligero grades of tobacco, however to the detriment of lighter seco and volado grades.”

Ligero and medio tiempo are high primings of tobacco located on the upper portion and top of the tobacco plant, respectively. These leaves tend to be stronger, thicker and richer in nicotine due to the increased sun exposure. Seco and volado grades appear lower on the stalk and get less sun exposure.

The lack of rain hasn’t had an equal impact on everyone’s numbers. “This 2018–2019 crop has been one of the best crops in the last 10 years on our farms, quantity-wise and quality-wise,” says José “Jochy” Blanco. He grows Criollo ’98 tobacco and Olor on a 50-acre farm located in Jacagua, in the Dominican Republic. It’s one of a few farms he owns and his tobacco can be found on brands such as La Galera and Aging Room.

“We have irrigation systems on our farms and thankfully we never lacked water,” Blanco says. “Unfortunately, not all growers have invested in proper irrigation systems, leaving them with little to no water. Despite our crops being excellent, the drought did cause the Dominican Republic to have significantly less tobacco than usual.”

This year’s dry growing season in the Dominican Republic occurs in stark contrast to last year, which was unusually rainy. As with any crop, weather is always key, as farmers always hope for the perfect combination of sun, rain and wind.

Adds Blanco: “Tobacco is a crop where the more control over the water you have, the less chance there is for diseases, and more chance you have for high quality.”